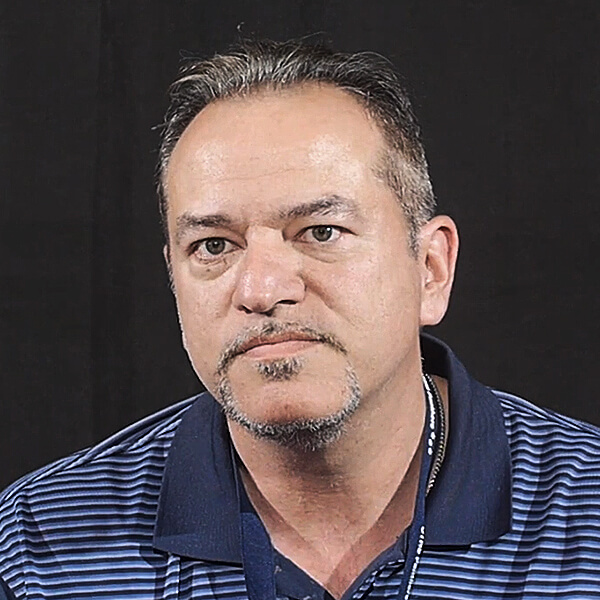 Marc Dubeau, a technology teacher at Osgoode Township High School, is pioneering a three-year program that helps students interact with game, VR, and virtual production design at an early age. Marc, a self-taught Unreal Engine user himself, has kickstarted a movement toward real-time technology, which he now shares with teachers across the globe via his YouTube channels.
Ask any successful person how they found their passion, and you’ll often get one of two responses: “lucky break” or “just stumbled on it.” But if you follow the thread, both come from the same place—a moment of exposure.

You can’t pursue what you don’t know about, which makes what teacher Marc Dubeau is doing so powerful.

Today, while most kids are cycling through the standards—English, math, science—Marc’s Osgoode Township High School class is learning how to apply real-time tools to games, animation, and virtual production projects, putting them in a unique position to ride the real-time wave in the very near future. With the games industry taking in an estimated $179.7 billion in 2020 and VFX studios building up virtual production wings as fast as they can, real-time knowledge is becoming more than just a creative outlet; it’s a marketable skill set. And Marc knew it would light a fire in his students. He just had to show it to them.
Image courtesy of Osgoode Township H.S.
“As a teacher, I want to prepare kids for the careers of today and tomorrow,” says Marc, “which means I needed to expose them to something they wouldn’t see in a traditional high school setting. Game engines are a direct path to that new world, as they can broaden horizons and help students make more informed decisions about where they want to go next. Unreal Engine opened a major window.”

Currently, Marc’s curriculum extends over a three-year program. In Grade 10, students begin learning about how 3D tools like Maya, Mixamo, and Asset Forge inform game designs. Imagine an epic battle with robots and bears, and you’re in the ballpark of what students are creating. At the same time, students begin learning editing tools like Adobe Premiere in Grade 10 and Unreal Engine in Grade 11, so by the time they reach a choose-your-own-adventure point in Grade 12, they can decide whether they’d like to specialize in games or virtual production.
Image courtesy of Osgoode Township H.S.

While there is structure to Marc’s lessons, the courses evolve as students bring in new ideas.

When his students started showing more interest in film and cinematography, Marc began exploring how Sequencer could be used to create scenes, employ different cameras, and craft mini-films within a virtual environment.
Image courtesy of Osgoode Township H.S.
“Besides being fun for the students, it opens up more opportunities to explore lighting and visual effects, and try out different post-processing techniques in Unreal, which expands their knowledge base even more,” says Marc.

Like his students, Marc is in a constant state of absorption, learning real-time tricks at night to keep up with an energized classroom. He considers himself to be self-taught, and has mostly figured out how to do challenging things in Unreal using the Unreal Online Learning portal and Udemy, and through various exchanges with his students. “In fact, some of my best tricks have come from things students have shared with me,” says Marc. “We are all learning together.”
Image courtesy of Osgoode Township H.S.
As Marc’s knowledge grows, he’s able to guide the kids as they explore their love of film. For a recent assignment, now known as Alien Spaceship, he asked them to create a short cinematic using the same Mixamo assets and characters Marc obtained during one of his Udemy courses.  The focus, as you can guess, centered on the interior of an alien ship. But each student had to define what came next.

All the lighting, camera work, and filming for each project was done in Unreal Engine, giving students a taste of how virtual productions operate in the real world. For the moment, each short is fully CG, but Marc hopes to incorporate Quixel environments, green screens, and live models in the future, so his students can see how compositing helps provide an intriguing balance of real and virtual.

“What’s amazing about this workflow is that it’s not even powered by high-end machines,” says Marc. “We are using anything we can get our hands on, which frequently consists of regular computers with updated GPU cards. To me, that’s the magic of Unreal. It’s versatile and supports programs like ours that are approaching real-time any way we can. That’s really powerful for a teacher. It’s one thing to see the future, it’s another to employ it right away.”

And Along Came Pikachu

As VR became more of a hot topic, Marc leapt at the chance to build it into his curriculum. After receiving initial funds from the Experiential Learning Division of the Ottawa Carleton School Board, the class created the first high-school-driven VR experience in their region—an amusing little game where players walk around with a hockey stick, softly whacking Pikachus.
Image courtesy of Osgoode Township H.S.
Next, Marc applied for an Epic MegaGrant to build out the program, receiving $25,000 USD to create a new VR game for struggling students. Currently in development, the game is set on-site at Osgoode Township High School and follows a time traveler who has lost his time-traveling tool (in this case, a wristwatch). Players progress by passing state-approved lessons, receiving a piece of the watch back after each successful test, until the traveler has everything he needs to return home.

While sidelined a bit by COVID-19 restrictions, the development has shown some good progress, with a dedicated team of students even incorporating a working pinball game. Behind the scenes, students are using Unreal Engine’s Blueprint visual scripting system to create the world. Since Blueprint simplifies the process of coding for non-coders, students have been able to start realizing their most ambitious ideas at a level that would have been impossible without serious C++ training. They have been supplementing this journey with a mix of tutorials and YouTube lessons, as well as the advice of Snowed In Studios, an Ottawa-based video game and immersive media development studio, that weighs in when the team is unsure how to move forward. The students hope to deliver a final game in the coming year.
Image courtesy of Osgoode Township H.S.

What’s especially heartwarming about Marc’s journey is how inclusive it is. Not only is he steering a new generation of artists from the ground up, he’s leaving a trail of breadcrumbs for other educators who’d like to do the same.

The fruits of this labor can be found on YouTube, where curated playlists show teachers (and students) how they can start implementing basic virtual production and Unreal Engine lessons into their lives. In the last year, Marc has also created a Google community for middle/high school teachers in Canada and the US, which allows anyone to share what’s been helping in terms of skill development or lesson plans.

By every measure, Marc’s program is working, with many students opting to study animation and game design after graduation—often with skill sets that exceed other college freshmen.

“Schools are telling me that my students know things now that they wouldn’t be taught until the second or third year of college,” said Marc. “This puts them in a great position for the future, as they can spend those four years gaining higher-level skill sets before they enter the real world. That way, when they hit the job market, they’re more likely to get the job they want.”
Unreal Engine and Virtual Production for High School Teachers – In this playlist, Marc demonstrates how teachers can use pre-made Mixamo characters to create basic films. Like most of Marc’s lessons, it’s full of shortcuts for beginners, like using free HDRI images to help with the environments and lighting.
Creating Concept Art and Digital Media with Unreal Engine – These tutorials show how to create photographic stills or concept art using Quixel and virtual cameras. Students learn to build environments from scratch as they customize their footage to taste.
Teaching Archviz with Twinmotion – Since Twinmotion is an especially easy way to create archviz scenes, Marc believes this is the best place to start for beginners. In this series, students learn to create custom interior/exterior designs using either their own creations or elements they find in asset libraries like 3D Warehouse.

Sign up for the Education Newsletter to receive monthly updates and free, valuable teaching resources for integrating Unreal Engine into your curriculum and preparing your students for an immersive world.
SIGN UP NOW