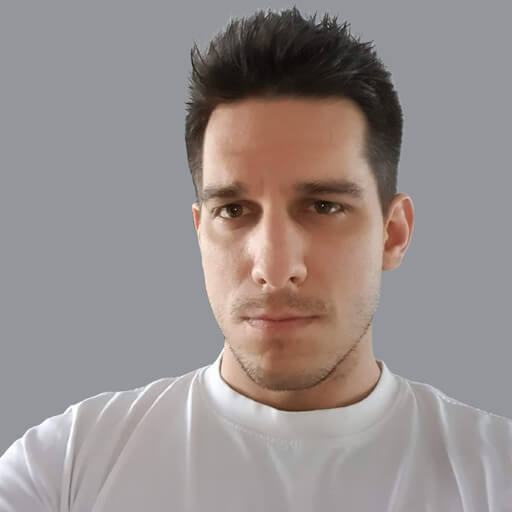 Michal Nowak is a producer and game designer at Render Cube. He started his gamedev career in 2014 as a graphic artist, and his work appeared in games such as Green Hell, Sniper Ghost Warrior Contracts, Hard West, and more.
Developed by Polish studio Render Cube, Medieval Dynasty is an open-world survival game set in the middle ages. Some have compared it to a grittier version of Animal Crossing with the game offering much more than just a survival experience. The title also incorporates deep management simulation, RPG, and strategy mechanics.

Currently in Early Access, the title is already being praised for facilitating numerous play styles, allowing people to follow quests on the beaten path or to experiment within a large sandbox-like environment. Moreover, players can hunt wild animals, construct farms, craft gear, manage inhabitants, and more. And they’ll need to manage food, water, and exhaustion while staving off dangerous predators like wolves and bears. Adding a layer of realism and complexity to the mix, Medieval Dynasty features a dynamic weather and season system, which makes certain foods either hard to come by at certain times of the year or even poisonous.

To see how Render Cube is combining all of these disparate elements together, we interviewed Producer and Game Designer Michal Nowak.
Not many open-world survival titles take place during the medieval era. Why was this setting right for the game?

Render Cube Game Designer Michal Nowak: We think that this era can serve as a really interesting backdrop for a survival game. One of the reasons why we were drawn to it was that, so far in games, the Medieval Age has generally been about knights, kings, castles, and grand battles, but there haven’t been many games that tell the story of everyday people. Life in those days was associated with many challenges, especially when you were just a peasant. So, we decided to show a side of the Medieval era that hasn’t really been explored.

Being a studio based in Łódź, Poland, did you lean into Polish history to recreate the Medieval era?

Nowak: We didn't target any specific stories or any specific historical regions, countries, or tribes. Because of this, we were able to have a bit more creative freedom. However, we did a lot of research on how people lived in those times and we did use our ancestors as a source of inspiration. So, although our game is not based on one specific location, tribe, or story, our history did help shape how the game looks and plays in a small way.
Image courtesy of Render Cube
Medieval Dynasty blends many genres together including survival, RPG, strategy, and management sim. Why was this blend right for the game?

Nowak: Regarding survival games and RPGs, these are genres that, when mashed together, complement each other really well. The biggest innovation and challenge was to introduce the city-builder elements with resident management. We thought about how important a well-functioning community must have been to ordinary medieval folk. Thanks to communities, people could feel safe, raise children, and survive. This city-building aspect really added a bit of freshness to the genre and to the mix, and players have reacted well to it.

The team injected so many genres into Medieval Dynasty. Did the game have any particular influences?

Nowak: We did draw inspiration from other projects but tried to maintain our individual character. Modeling Medieval Dynasty on other titles was useful at the beginning of production to get an idea of what we were striving for and to identify what we wanted to achieve; however, we very quickly went our own way, focusing on unique ideas and solutions.
Image courtesy of Render Cube
Medieval Dynasty features a large, beautiful, and atmospheric world filled with impressive-looking trees, vegetation, snow effects, and vast draw distances. Can you talk about how you nailed the look of the environment?

Nowak: Years ago, we started as an outsourcing company. We mainly created 3D graphics for AA and AAA games. We knew what visual quality we wanted to achieve, and Unreal Engine allows us to get amazing effects. In addition, we have really talented and committed people on the team. Both programmers and graphic artists worked very hard to optimize various elements of the project. Thanks to that, we could hit our visual quality while maintaining reasonably low hardware requirements.

Considering the game runs so well, how did you optimize Medieval Dynasty?

Nowak: Our lead programmer and his team did most of the work optimizing the game on the engine side. They spent many hours in the Profiler. I can't speak to all of the know-how here, but, in general, it's a good use of the engine's capabilities. Reasonable use of terrain, memory management, and, of course, good LOD preparation, which graphic artists are generally responsible for. Optimization does require us to impose certain constraints, however, such as limiting the number of buildings and inhabitants.
Image courtesy of Render Cube
Did the team leverage any Quixel or Unreal Marketplace assets?

Nowak: Yes, we used various Unreal Marketplace assets. They are often used as base elements that can be quickly implemented, but they are often also heavily altered as the team transforms them to fit our needs. Regardless, they can be very useful; especially at the beginning of production when everything is still in its infancy.

In addition to a dynamic day-to-night cycle, Medieval Dynasty encompasses all four seasons into the game with their own realistic weather conditions that affect gameplay. How did you implement these elements?

Nowak: We rely heavily on shaders and textures. Precipitation depends on the cloudiness of the sky, and whether it rains or snow depends on the season. We also add snow on objects with shaders. In addition, certain plants and objects disappear and reappear depending on the season.
Image courtesy of Render Cube
As a survival game, Medieval Dynasty features an in-depth endurance system that affects how tired, hungry, and thirsty players are. How did you approach designing it?

Nowak: The game’s survival system developed naturally with the emergence of new parameters, which began with standard elements like health, hunger, and thirst. We then added a stamina component that’s tied to various activities. Over time, we began to add other parameters as the entire vision of the game developed.

With a harsh need to survive, Medieval Dynasty has been praised for presenting multiple ways to thrive, whether that be through hunting, harvesting, or farming. Can you talk about the work that went into making these different gameplay styles viable?

Nowak: It has a lot to do with the overall balance of the game, and it could still use some work, this is where player feedback becomes invaluable. Thanks to the variety of activities in the game, players can do different tasks depending on how they feel during any given moment. For example, one minute they can focus on hunting and chasing wild animals, and then the next minute they can decide to relax and cultivate their field with the rest of the villagers.

Considering the game's complexity, Medieval Dynasty has been praised for having an easy-to-manage user interface. Was there a lot of work involved with refining and iterating on it?

Nowak: Work on the interface took a lot of time and involvement from numerous team members. In our Early Access state, we still feel that there are some elements that could and should work better, so we will continue to refine this aspect of the game.

How big is the team and when did development begin on the project?

Nowak: We started work at the end of May 2019 with six people and now, after almost two years, have hired a sixteenth member. So, we are happily growing!
Image courtesy of Render Cube
Why was Unreal Engine a good fit for the game?

Nowak: We got to know the engine while making our first game, Monster League. We think it’s intuitive and allows us to achieve amazing visual results, which is really important to us. Ultimately, it’s just a great tool for making games.

With the Medieval Dynasty currently in Early Access, how do you hope to evolve the game moving forward?

Nowak: We have a plan in place to develop the game to version 1.0. We will add new content, expand the game, and of course, will keep polishing what we have to make the experience better and better. We also have plans after version 1.0, but we’ll keep that to ourselves for now.

Thanks for your time. Where can people learn more about Medieval Dynasty?

Nowak: You can check out Medieval Dynasty on Steam and on the Epic Games Store. Make sure you also visit our official website and Discord server.