Ringling College of Art and Design

Ringling College of Art + Design offers the Bachelor of Fine Arts degree in Game Art, where students in the program are not only designing, creating, and analyzing the visual components of games, they are getting valuable instruction from seasoned faculty members who bring their industry experience to the classroom. Additionally, they are getting an immersive real-world experience from outside the classroom as well, as each Ringling College student is guaranteed the opportunity to work on an actual project with a company or studio in the gaming industry during the pursuit of their degree.

Started in 2007, the Game Art major at Ringling College is a highly-collaborative teaching environment that merges the aesthetics of feature film with today’s most current technology. The major focuses on creating visual artists that are marketable in the computer gaming industry as well as other areas that use real-time visualization.  Students are taught how to use visual imagery, environmental storytelling, and emergent narrative to create a coherent, visually-sophisticated world where game play makes sense.  By focusing on models, textures, lighting  and other effects that go into a game, students are creating an experience and learning how to place people in worlds that move them away from being a casual observer and into the role of a participant.   Each student’s senior thesis project is a game trailer made from in-game footage rendered in UE4 that shows modeling, lighting, texturing, and level design skills. Each space is fully navigable, allowing drop-in exploration in real-time.

Students from the Game Art major are starting their careers at some of the most sought after companies in the world:  EA, Blur Studios, Blizzard, Epic Games, Bioware, WB Turbine, Bungie, Microsoft, Naughty Dog, Riot Games, Moonbot Studios, Sony, Harmonix, 2K, Arena Net, Certain Affinity, Crystal Dynamics, Hasbro, Activision, and Intel.  With high-profile studios coming to campus every spring to recruit from the program, students are getting the opportunity to show their skills to the world’s leading companies in person, with many of them securing positions before graduation. 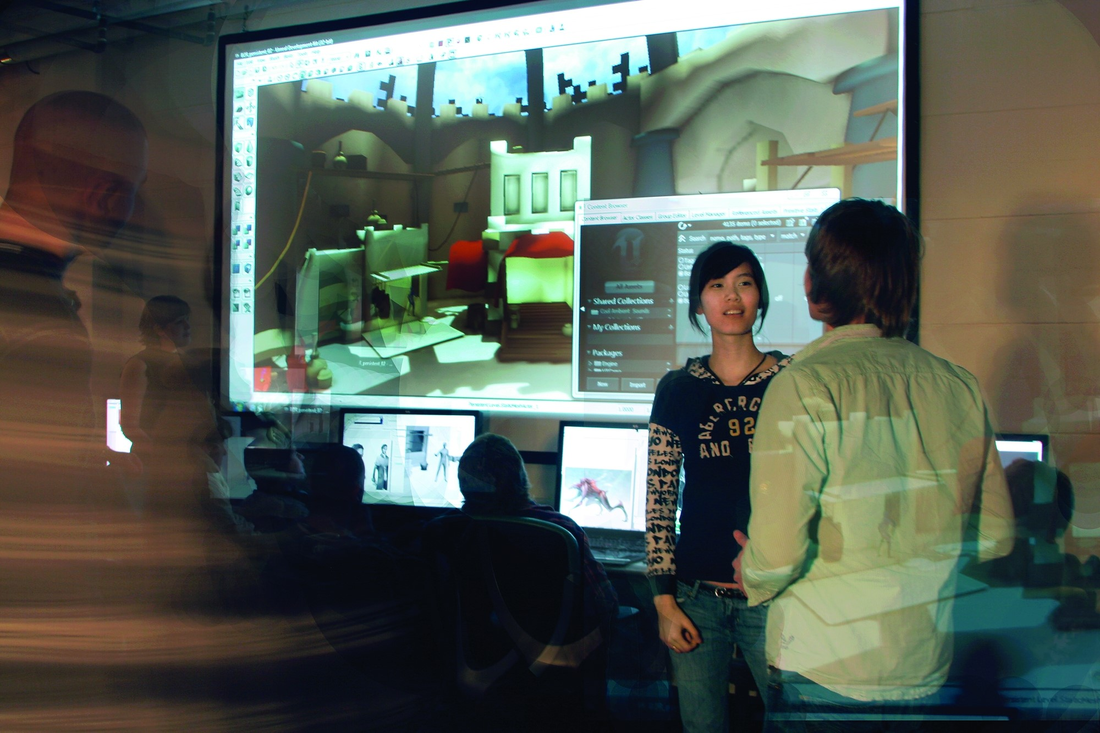 Ryland is an environment artist who has worked with Electronic Arts, THQ, Snowblind Studios and Warner Brothers Games and he’s created environments that push the limits of the visual standard of the games industry. Ryland’s shipped titles combined have sold more than six million copies and include Lord of the Rings: War in the North, Guardians of Middle Earth, Batman: Arkham City and Middle-Earth: Shadow of Mordor.  As he developed games for these popular franchises, he was responsible for vast sections of levels, system development and AAA quality environment assets. As the tools and technology advanced in the games industry, Ryland was a key individual at the studios in applying these changes directly to content creation pipelines and trained groups of professional artists on how to execute efficient art with these new advancements.
http://rylandstudios.com

Jason is an active concept artist and freelance artist in the gaming industry. His clients include Ubisoft, Take Two, Electronic Arts, THQ,  4mm Games, Paizo, and Wizards of the Coast.  Recent projects include THQ's Homefront and Irrational’s Bioshock: Infinite. He has developed games on console, PC, mobile and social platforms.  Jason continues to draw and paint regularly outside of his personal work, which has been shown at fine art spaces throughout the greater NYC area.  Jason teaches visual design of characters, props, and environments with an emphasis on personal storytelling.  In addition to the principles and elements of design, he embraces the use of 3D to help students push compelling expression and backstory into every asset.
http://www.spikytiger.com/

Martin is a creative leader and artist with over 20 years of experience in media and entertainment.  He has contributed his talents to feature films, network TV graphics, commercials, and to the creation of 20 games from the arcade days to recent consoles and mobile devices.  Prior to Ringling, he was a Senior Producer, and Director of Art at Midway Games.  He worked on the coin-op CarnEvil, the Mortal Kombat franchise, Psi-Ops, Stranglehold, the over-the-top sports series Blitz, Ballers, and Slugfest.  At Ringling, he co-teaches Game Art’s three-semester curriculum arc for the signature capstone class in the major.
https://www.linkedin.com/in/martymurphy 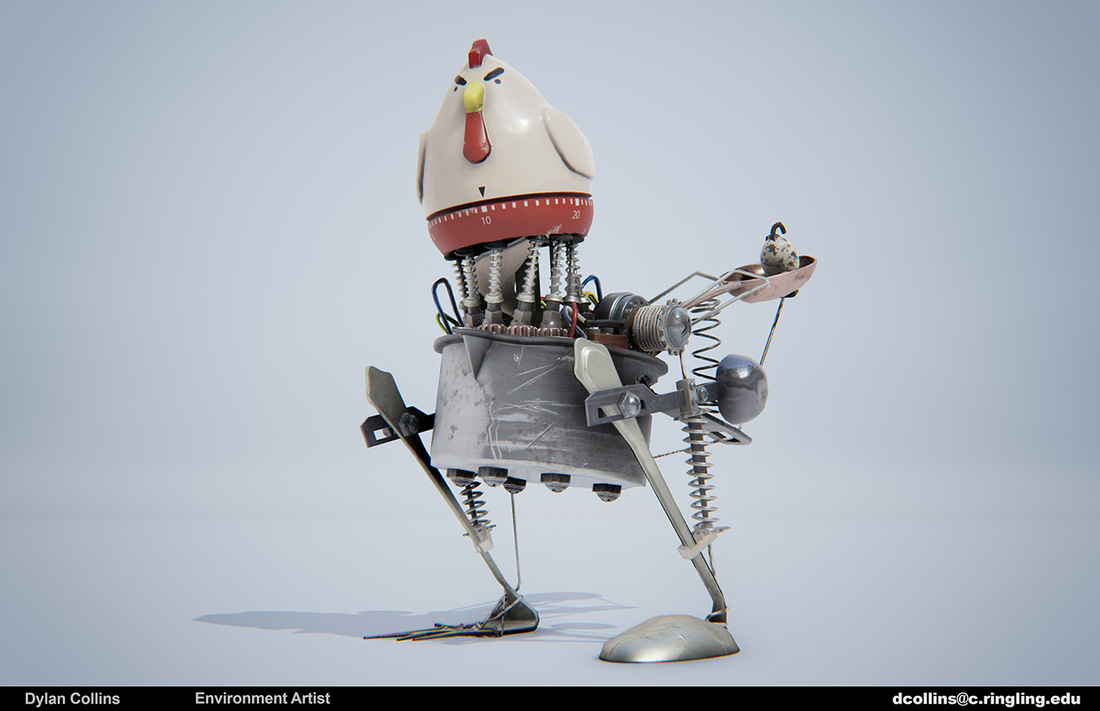 Dylan is a rising senior and is expected to graduate in 2016.  At Ringling, he has found his calling in making quirky machines.  Dylan excels at creating complex mechanical movement and prototype gameplay with Blueprint.  In addition to UE4, Dylan uses Maya and Substance Suite to create visually sophisticated, physically-based textures.  Dylan is currently working in an internship as a 3D Artist creating architectural visualizations at Hoyt Architecture. 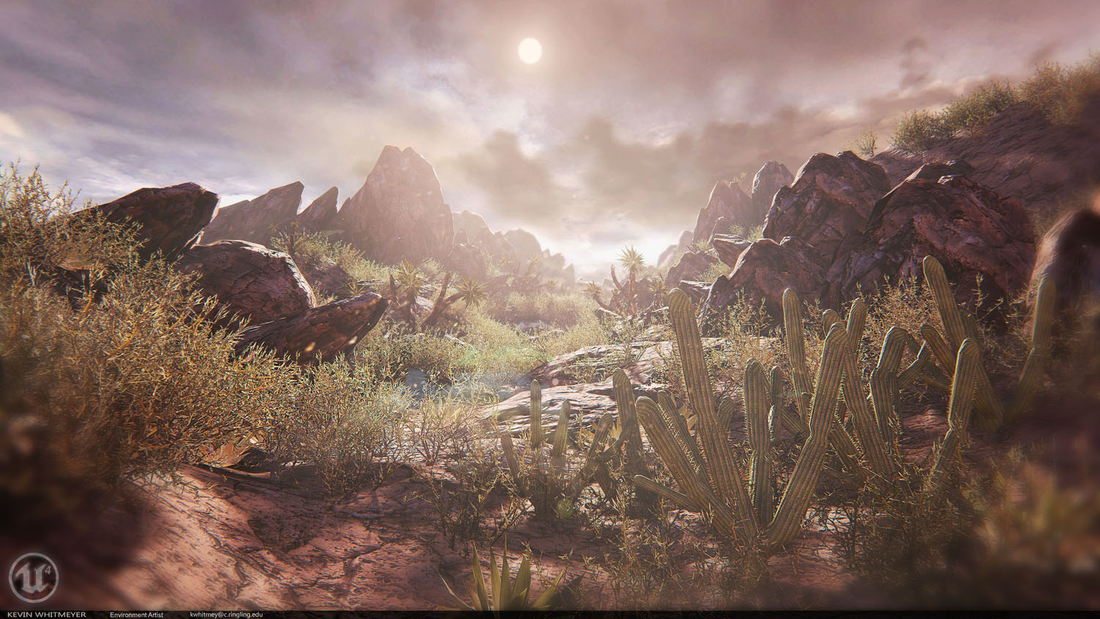 Kevin is a rising senior and is expected to graduate in 2016.  At Ringling, Kevin has found his calling in organic modeling and building visually sophisticated environments.  Additionally, he was elected as a Trustee’s Scholar for his upcoming Senior year. The Trustee’s Scholar is the highest honor that is awarded at Ringling College because it recognizes: 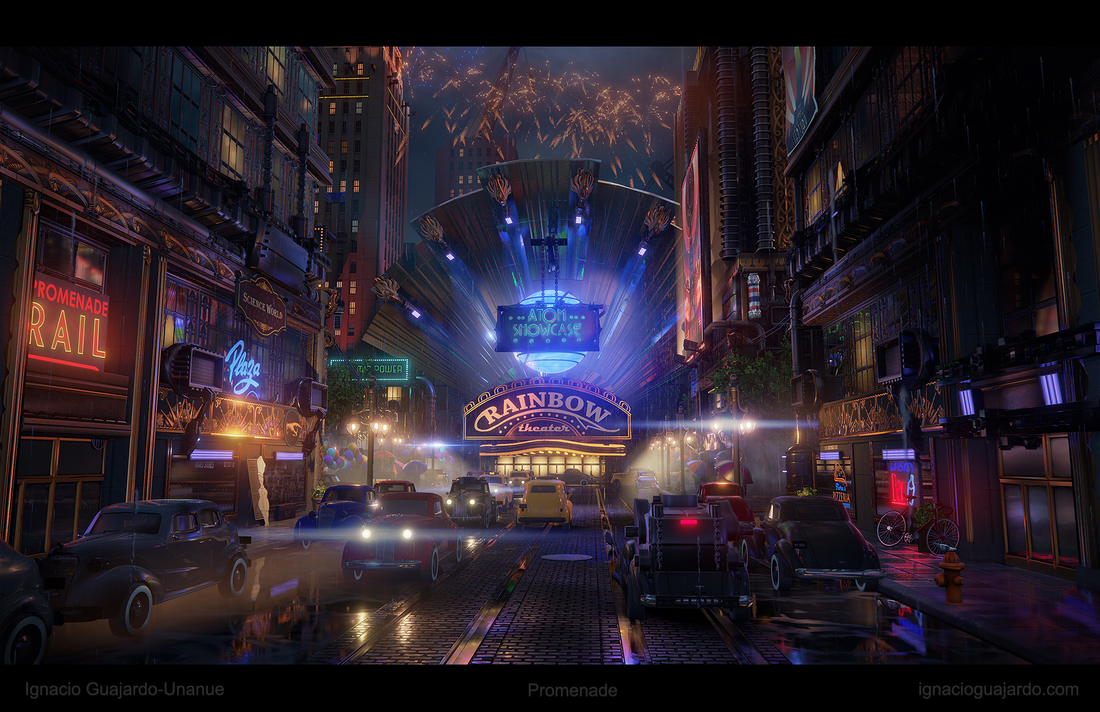 Ignacio recently graduated and is currently working at Bioware. He is extremely interested in hard surface modeling and is a dedicated artist who worked intently on his portfolio while at Ringling. In his junior year, he earned a summer internship at Epic Games where he worked on Fortnite and was exposed to the beta version of the UE4.  Upon return to Ringling for his senior year, he and his team helped pilot the adoption of UE4 in the Fall of 2013.  Ignacio has also been selected as "Student of the Year" Finalists for the 2015 CG Student Awards - See more at:

Students from the Ringling College game art major spent the last year working on 3D game assets that run in UE4 with American Zoetrope, the production company created by Francis Ford Coppola and run by his son, Roman Coppola. American Zoetrope provided a wide range of educational opportunities by working with Ringling to conceptually explore ways of translating aspects of their library, such as Apocalypse Now, into digital formats.  A core group of 5 students (plus a few others intermittently) worked for 2+ semesters, forming the basis of their senior thesis project.  Managed by Ringling College faculty, the student team worked closely with staff at American Zoetrope, as well as David Shapiro of Semkhor Productions, to precisely depict the most famous and familiar pieces of the various intellectual property and translate them into environments for potential games. 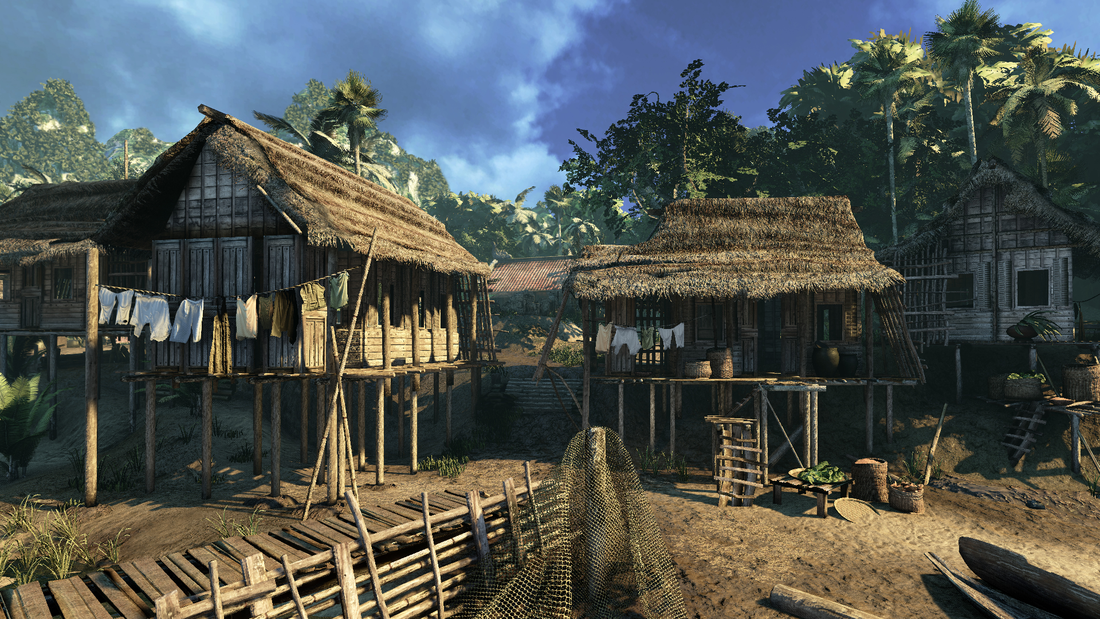 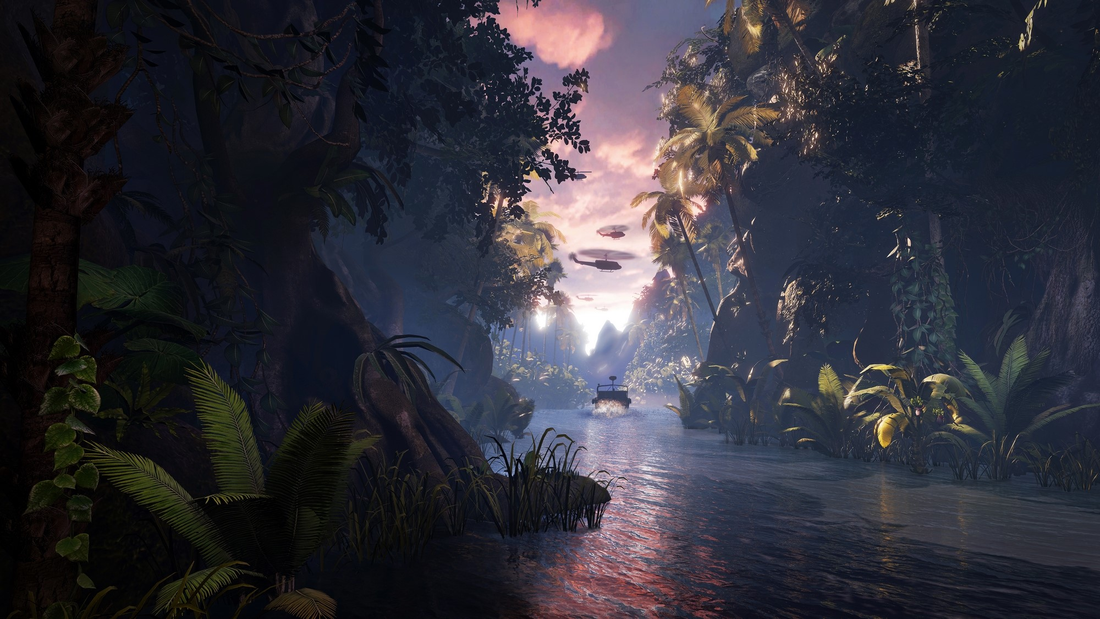 -Images by Sarah Lundberg, class of 2015 / Rendered in real time in UE4

Using a structured and focused curriculum with professional standards taught by professional game developers, students from Ringling College of Art + Design’s Game Art major are emerging from the program with the skills sought by employers and ready to work in the industry.