One of the most critically acclaimed role-playing games of 2007, Mass Effect, is the latest stellar game from the minds of BioWare. The developer, which was recently acquired by Electronic Arts, has perfected the art of deep story lines and engaging characters in interactive entertainment.

Ray Muzyka, co-founder and CEO of BioWare, said that with Mass Effect, the primary goal of the team was to create the ultimate science fiction experience. While that lofty statement may have crippled lesser developers, BioWare was up for the challenge.

"With Mass Effect, we wanted to create a space adventure that fulfills the inspirational fantasy of exploring the galaxy, with an intense, exciting story," explained Muzyka. "We also wanted to push the cinematic nature of the game, making players feel like they were both the actor and director of an epic movie. To accomplish this, we’ve created some of the most realistic digital actors you’ve ever seen or heard in a game, with a storyline filled with emotionally compelling moments. We’ve used cinematic techniques like dramatic camera angles, depth of field, motion blur, and other types of cinematography, so everything looks and feels like a blockbuster Hollywood movie–but even better, you get to take the role of the leading actor at the center of the experience and also the role of the director!" 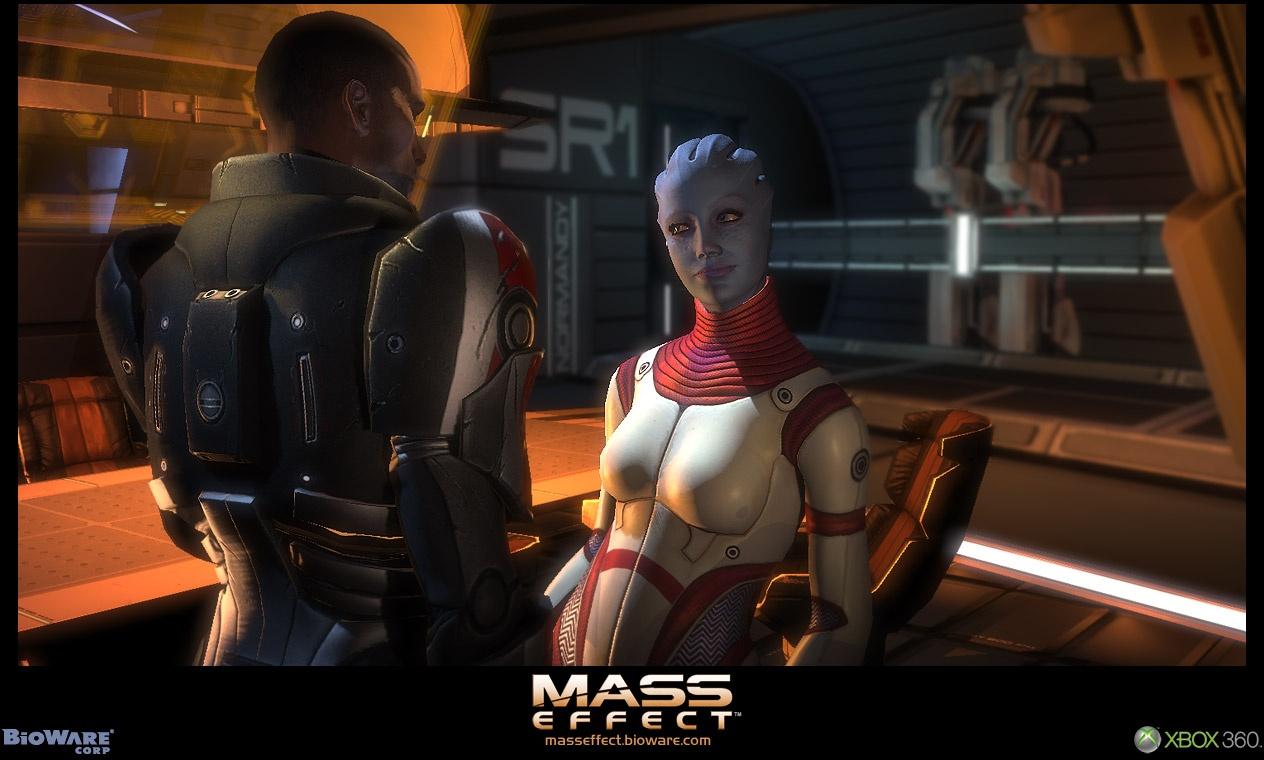 With all of these Hollywood cinematic styles, it's no surprise that BioWare drew inspiration from classic science-fiction movies like Alien, Blade Runner, Star Trek II: The Wrath of Khan, and 2001: A Space Odyssey. Muzyka said these films had a very tangible atmosphere and a serious cinematic tone. But movies weren't the only entertainment medium that influenced the team.

"In terms of games, some of our inspiration goes as far back as Starflight, which created an entire galaxy of procedural planets for players to discover, way back in 1986, as well as Star Control," said Muzyka. "A lot of our team’s excitement about the uncharted worlds in Mass Effect comes from imagining what a freely explorable universe would be like inside a very realistic next-gen game."

To bring this realism to gamers, BioWare turned to Epic's Unreal Engine 3 to bring this massive world to life. 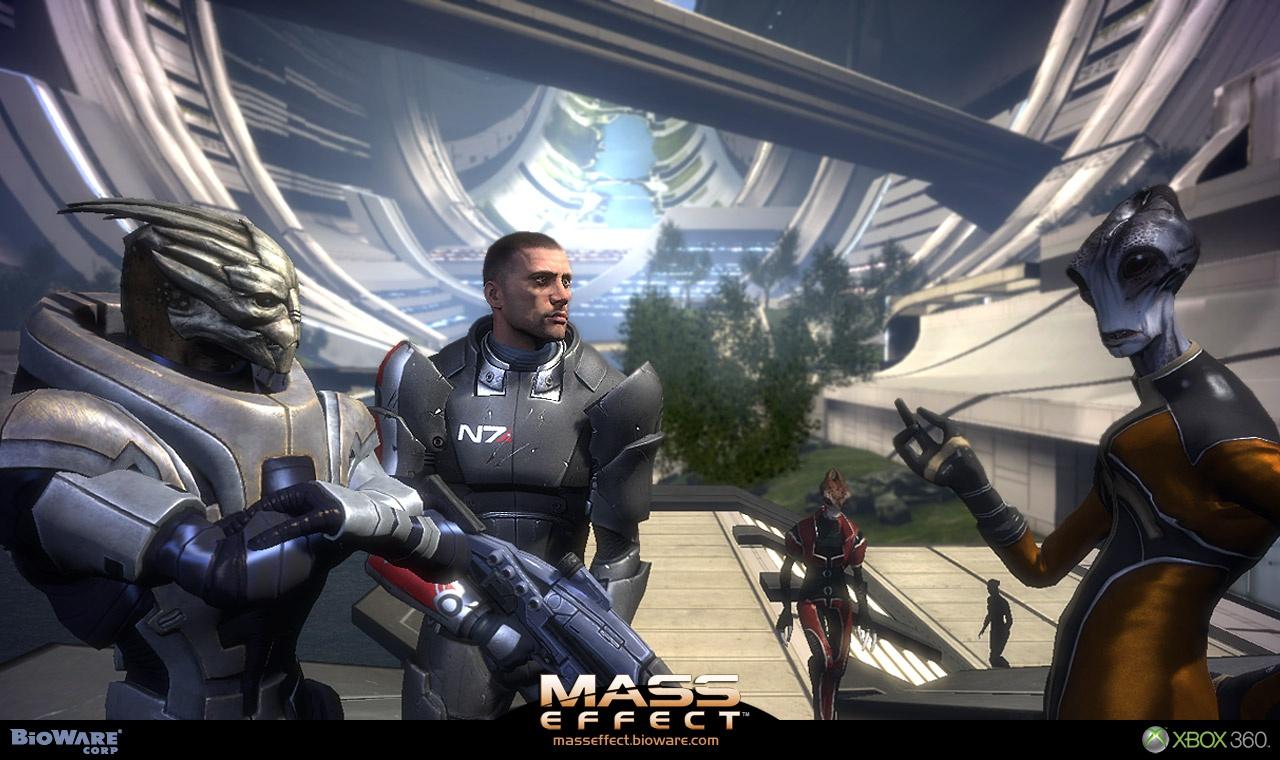 "Combined with the BioWare story and character technology we created to allow us to create deep, compelling worlds and characters, the Unreal Engine gave us a very strong starting point to create one of the most compelling games on the Xbox 360 and PC," said Muzyka. "Thanks to the hard work of the team, we are extremely proud of what we’ve accomplished with Mass Effect." Mass Effect garnered over 90 awards in 2007, including Game of the Year from the New York Times and RPG of the Year from the Academy of Interactive Arts & Sciences.

"The Unreal Engine combined with the additional technology BioWare built for the Xbox 360 and PC systems, allows us to deliver highly realistic visuals, digital actors who express emotion like never before and a highly cinematic approach to storytelling," said Muzyka. "We’re really proud of the great teams at BioWare–they’re hardworking and passionate, and it’s an honor to work alongside them all."

Utilizing UE3, BioWare approached the development of Mass Effect for both PC and console by creating a solid core story and design first, making sure it had key elements like compelling teammates, exciting combat, deep exploration, and interesting and fun ways to progress your character. Muzyka said working on next gen consoles and PCs has allowed BioWare to take all those things to the next level. 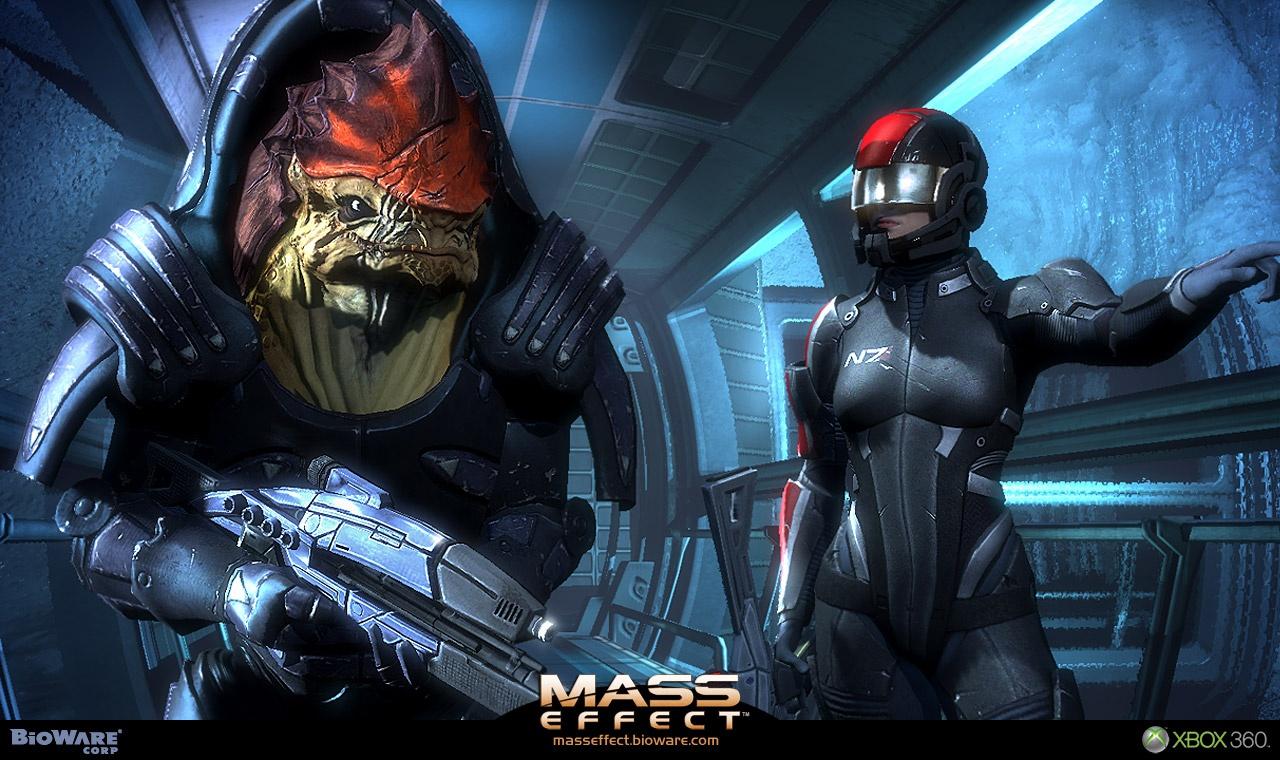 "We’ve been able to create some amazing lighting and physics effects that simply weren’t possible in the last generation of technology," said Muzyka. "We were also able to create a very complete Dolby digital sound experience, making Mass Effect a truly premium high-definition experience for your home theatre."

Another thing that next-gen consoles and PCs provide is more memory for animations, allowing characters to physically interact with each other and the environment better than ever before. The characters themselves are truly state of the art as we pushed to deliver realistic facial movements and full lip-synching.

According to Muzyka, all of this adds up to one thing--world class entertainment. Mass Effect is a game world where characters are able to do what they want, see interesting and meaningful results for each of their actions, and affect other characters and the entire galaxy in often tense and always emotionally compelling ways. This is one of the reasons we can’t wait to deliver Mass Effect for PC fans in May. 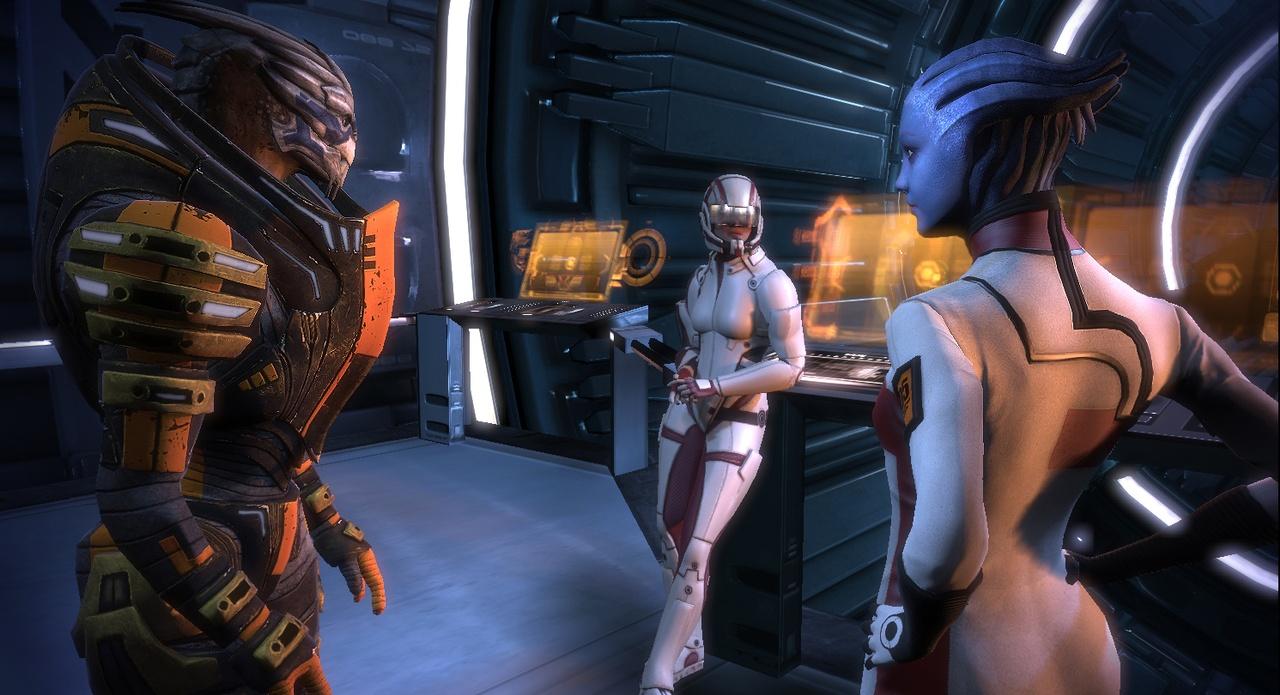 "The thing we’re most proud of is our cast of digital actors that we’ve used to bring the level of realism to the next level," said Muzyka. "Incredibly realistic animations and movements, including compelling facial expressions and body language, are all combined with professionally performed dialogue to convince players that each person or creature they encounter is real."

Muzyka has seen a tremendous evolution in digital character growth over the years. He said one of BioWare's biggest achievements has been in the area of creating genuine emotion within its stories.

"BioWare’s earliest games were text-driven and much of the emotion was conveyed through carefully-written dialogue," said Muzyka. "Eventually we were able to add voice, which added a new depth to digital acting because now you could actually hear the emotion in the words. Now we’re at the point where digital actors can now express themselves with physical cues as well: you can get close up to them and see the emotion in their faces and body language. They all move and behave more naturally and realistically than ever before, and this adds up to a feeling of real emotion."

One of the mainstays of any BioWare RPG is deep, engaging story lines. Mass Effect is no exception, as its core story will take dozens of hours to complete without delving into the many side quests. 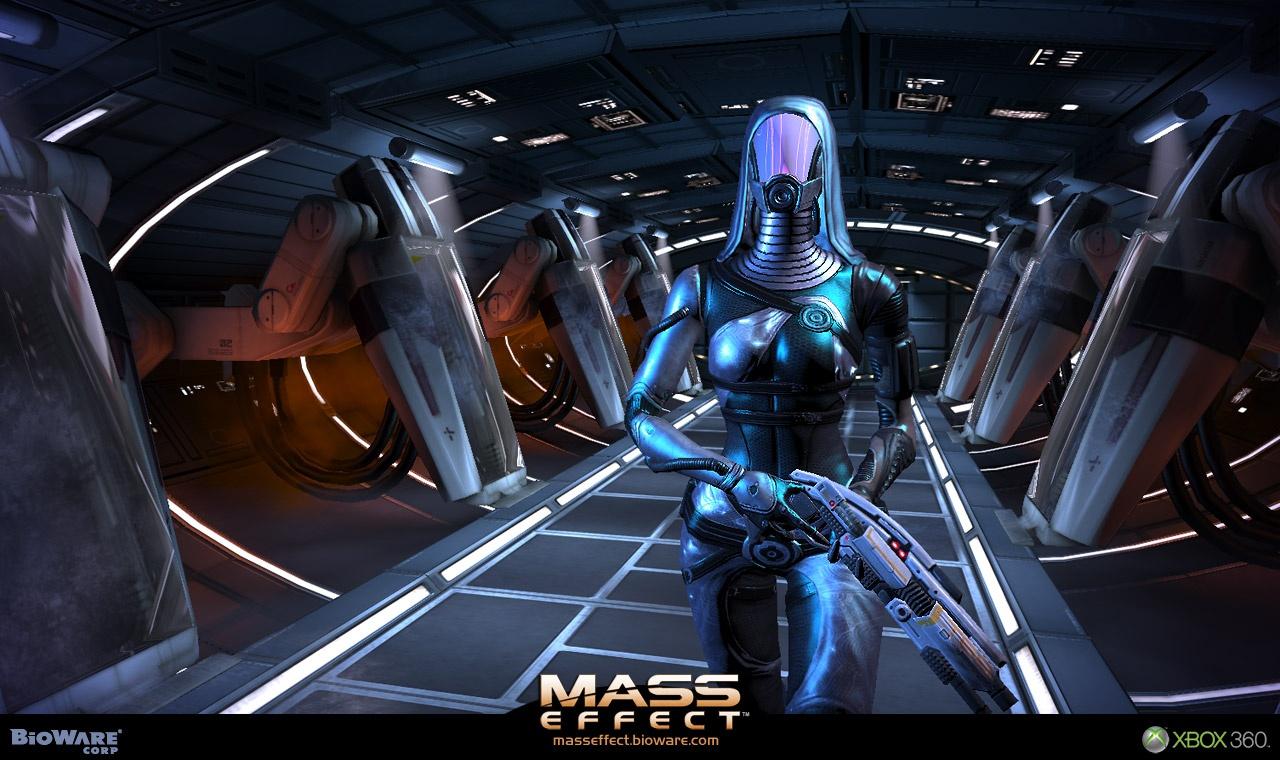 "Including all the numerous planets and locations to explore, and all the side quests and missions you can choose to pursue, Mass Effect allows the player to go as deep as they want – completing all of the content in the game would take 40 to 50 or more hours to play through," said Muzyka. "Adding to the depth are multiple unique endings that are directly related to how you play the game. Mass Effect definitely supports players continuing their experience even after they finish Mass Effect on PC and 360–you can restart the game with your high-level existing character, or create a new one with new abilities only possible after you’ve completed a playthrough."

Recently, the team has been customizing the interface for the PC SKU of Mass Effect to ensure that it’s a really great adaptation for PC, as all changes and optimizations were carefully developed building from the original award-winning Mass Effect on Xbox 360.

"Our first downloadable expansion for the 360 version of Mass Effect, Bring Down the Sky, is due out this month and it features a brand new world to explore with combat, quests and exploration–adding up to about 90 to120 minutes of new adventures," said Muzyka, who expects additional expansions to follow for both Xbox 360 and PC.