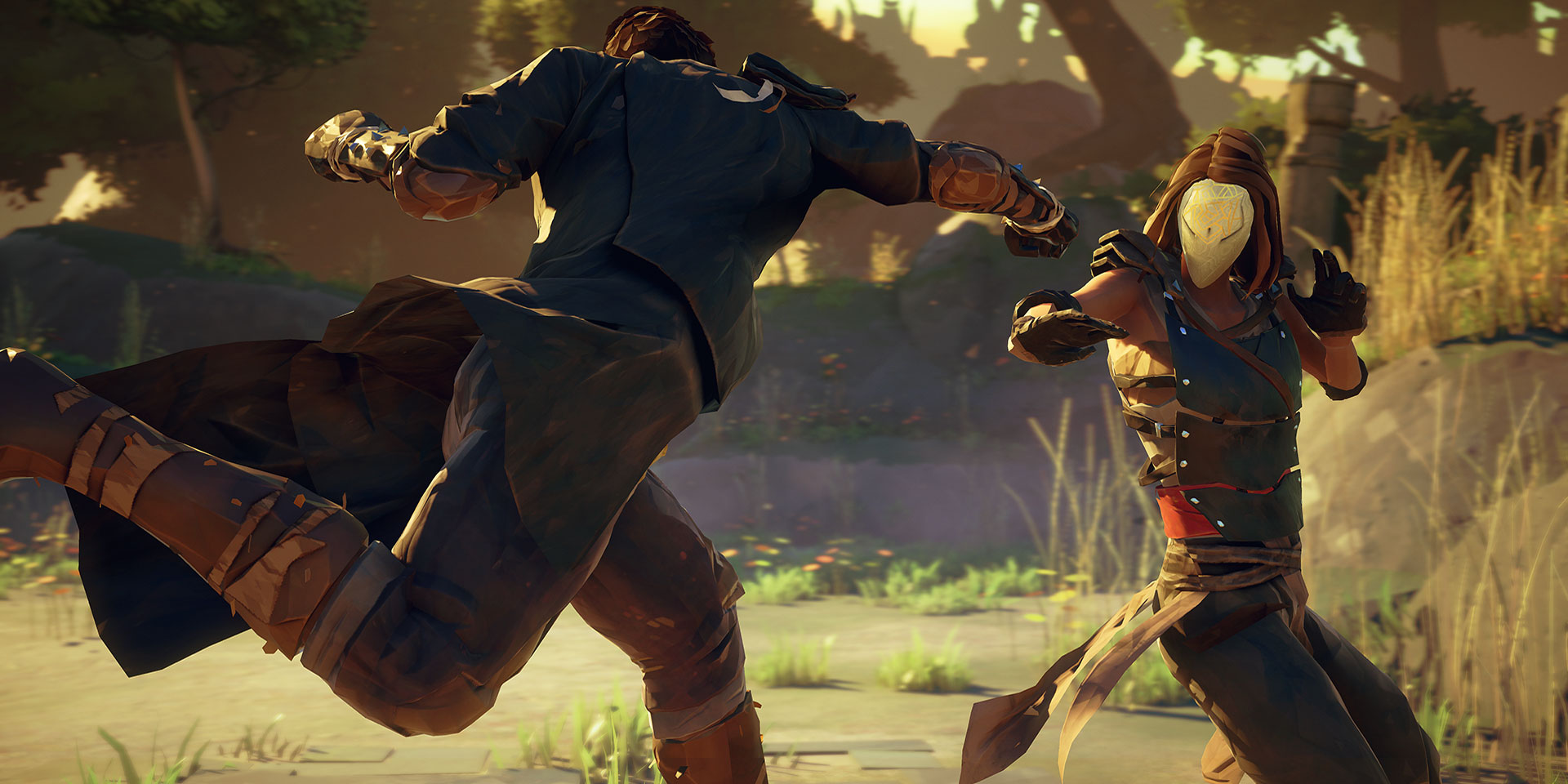 Incorporating martial arts into a fighting game is nothing new, but attempting to do so in a way that pays homage to the depth and beauty of the traditional combat craft is rare territory to explore. For the team at Sloclap, pursuing their passion for martial arts while attempting to break new ground within the fighting game genre is at the core of the studio’s goals for Absolver - a multi-platform online melee action title that puts players behind the mask of a Prospect, who has taken a sacred vow and chosen to join the Absolvers, an elite corps of combatants fighting to maintain stability in the world.

While it may look like a somewhat traditional fighter at first glance, Absolver features carefully-crafted character development and interaction that help set the project apart. The game’s deep combat systems serve as a backdrop to facilitate the many multiplayer modes that make up the experience - all while fostering respect for your fellow Prospects through the  forging of meaningful relationships on your journey to master and mentor in the art of combat.

To find out more, I caught up with Sloclap’s Creative Director Pierre Tarno to discuss the origin of the project, its various multiplayer modes and how Unreal Engine has helped bring Abslover to life.

Q: How did the initial concept for Absolver come about?

Our initial intention was to make a game that reflected the beauty and depth of martial arts combat. Our three taglines were "combat is a dance" "movement is your weapon" and "make your move" and we wanted to make a game that was more accessible than a regular fighting game, but that also had enough depth for PvP gameplay. However, we didn’t want a game that was purely about fighting, and we wanted to include elements of companionship and relationships which are important parts of martial arts. Which is why in the game you explore a small open world - a key pillar of the game are the people you meet.

Q: Can you give us an overview of the game’s story and the player character’s motivations within it?

Become an Absolver! Players start as something called a Prospect, a low level fighter in the ruins of this fallen empire. Through training, combat, and instruction to take down several key NPCs in the world, players can earn the right to fight their way to the top of the tower to square off in a final fight and become an Absolver.

Q: Can you discuss the customizable aspects of the game and how they will make each player’s experience feel unique?

The character is fully customizable, with nine different equipment categories that go from the mask to the boots, but importantly, players can define their character's moveset via the Combat Deck. You have two movesets at your disposal: a bare handed deck and a weapons deck, up to 32 different attacks that can be arranged in many different tactical configurations. Each player's fighting experience is unique, which makes encounters so interesting.

Q: Tell us about the game’s art style - which is beautiful. Did you land on it right away or go through many iterations?

It took us approximately nine months to really define our art style - we started with amazing key art by our Art Director Michel Donzé, which we provided inspiration and reference for the 3D work; although there technical hurdles along the way, we managed to stay in line with that initial vision.

Q: From cooperative battles to combat trials and even mentoring students, Absolver has a lot of interesting multiplayer modes to explore. Was this central to the game’s design from the onset or did it slowly take shape throughout development?

Absolver was meant as an online game from day one, and the core concept was always to make a game with a deep but accessible fighting system, but where relationships between players would be an important part of the experience. The precise form emerged with time and wasn't all thought out from the very beginning of course, but we focused on bringing these two parts together, in the world, and through the learning and teaching systems. Players who want to focus on pure fighting can go into Combat Trial game modes, those who want a more free form experience can roam in the world, to fight, teach or learn from others.

Q: How have you gathered and incorporated feedback from the community throughout development.

We ran a closed alpha and a closed beta in 2017 which were very helpful both to work on our online infrastructure and to get feedback from players. We were very happy to see that is the overall feeling was positive, but we also got interesting feedback from players. We certainly plan to listen closely to what the community will have to say about the game to guide us for updates - we plan to do a lot of them so it's important to know what players want first!

Q: How has Unreal Engine helped bring Absolver to life?

To make an online 3D action game from scratch in 2.5 years, starting with four people, you need a solid engine to work with. UE4 has great tools, support, and community, so when you have an amazing team it's possible to do amazing things with it!

Q: Were there any aspects of Unreal Engine that you found particularly useful throughout development?

Being able to customize the engine to our needs, from the online architecture to the animation system, was very critical. Blueprint also empowered designers and artists a lot.

Q: Where can people go to find out more about Absolver and to get their hands (and fists) on the game?

@Absolver on Twitter is a great source of information; you can also head to absolver.com which will feature news on planned updates, release notes, forums and more. This will go live with the game on August 29th!