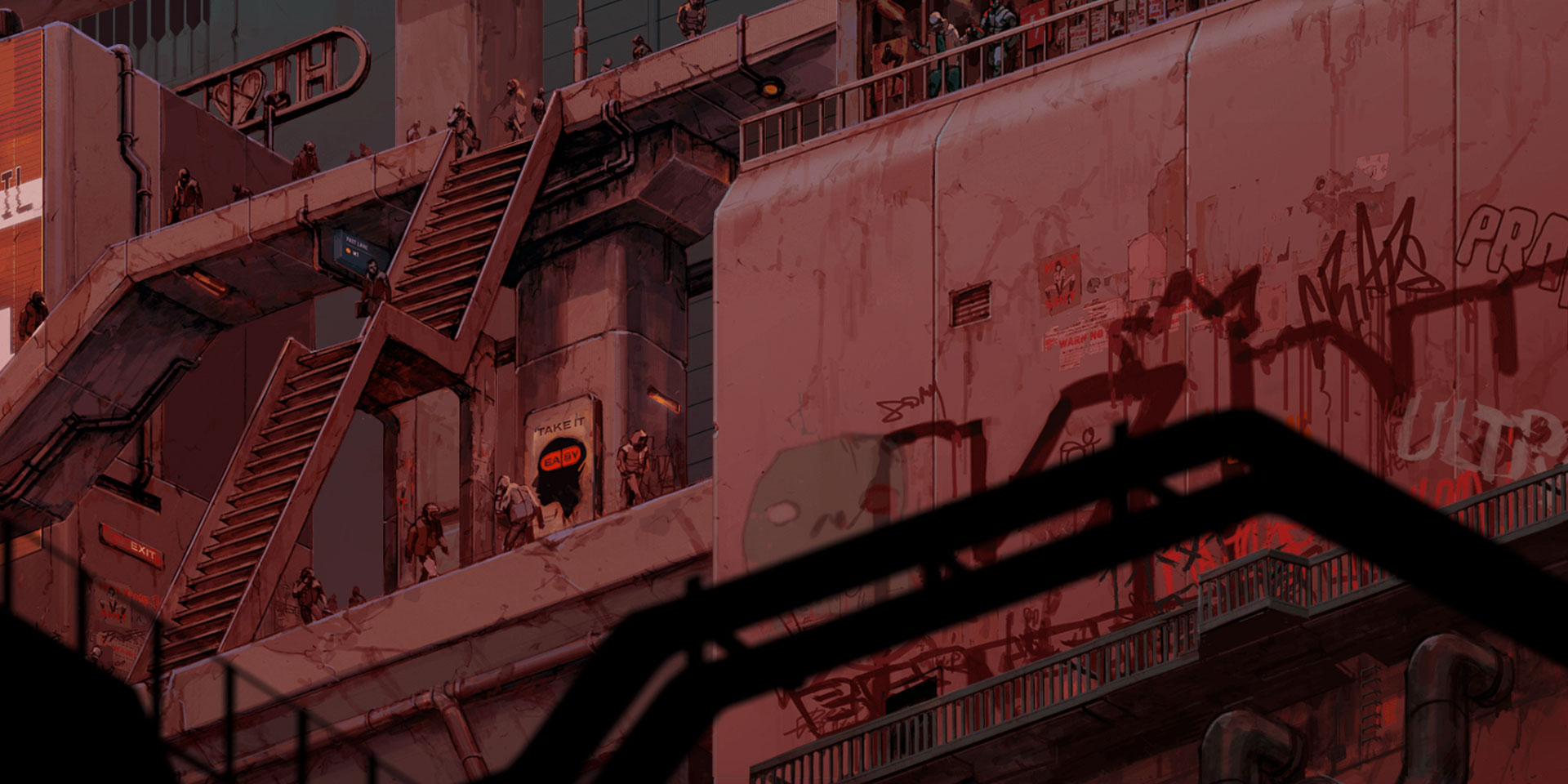 Unmasking the Motives and Mayhem in RUINER

Hacking is hot topic these days - both inside the gaming industry and elsewhere - but while empowering players to hack their way through a game is nothing new, turning the tables so that the player themselves can become hacked is an interesting premise indeed.

That’s where things take off in RUINER - a top-down action shooter created in the spirit of cult cyberpunk anime and game classics. Developed by REIKON GAMES, which is comprised of talent from well-known projects including The Witcher, Dead Island and Dying Light, the project was born out of a shared passion for great game design and a desire to push the boundaries of what’s possible for a small indie team. Ultimately, RUINER is looking to offer a unique take on cyberpunk motifs that’s inspired by the modern world.

RUINER caught Epic’s attention early on, and in March 2016, we awarded REIKON GAMES an Unreal Dev Grant to help them along. Shortly thereafter, they signed a publishing deal with Devolver Digital to take them the rest of the way.

I recently caught up with narrative designer Magdalena Tomkowicz, gameplay designer Jakub Styliński and creative director Benedykt Szneider to find out more about the game’s premise, the masked character at the core of the chaos, the dark but beautiful streets of Rengkok City and how Unreal Engine has helped the team reach their goals for RUINER.

Q: Who do you play as in RUINER and what is the main character’s motivation? Also, what’s with the mask?

MT: The main characters were one of the first elements of the game’s original design. We knew from the beginning that we want to have main characters masked: the masks covering their faces, keeping their identity unknown and inducing fear into their enemies. We’d been thinking about facial mapping and a couple of other things and then Benedykt Szneider came up with the display helmet. And we took it.

The helmet is also an interface through which the player communicates with the world. You start the game being hacked into killing the boss of HEAVEN, one of the leading virtual reality corporations in the region. As you’re unhacked by your mysterious hacker girlfriend, you learn that the people who hacked you also took your brother.

The game is a dark adventure where you’re looking for the one person you’ve got left, tearing through hordes of enemies, behind the scenes of Rengkok City. We can hint who the character is, but having him faceless leaves a lot of space to the player’s imagination.

Q: What can you tell us about the city in which the game takes place?

MT: Rengkok City is a rapidly developing city in Southeast Asia. Its name comes from the Japanese word rengoku (煉獄) which means purgatory. In the game, a cheap workforce and corruption has opened the door for foreign investors, of which HEAVEN has proven the most prominent. The company provides everything from jobs to the Citizen Management Systems. It has also introduced a new economy based on Karma which replaces money.

Karma is an equivalent of loyalty points: you’re being rewarded with Karma points by the system for good choices and behaviors, you level up in the social structure, gaining access to more and better stuff. Rengkok is divided into districts with different levels of access depending on the citizens’ Karma levels. Rengkok South, your safe zone, is one of the lowest, level 1, districts. 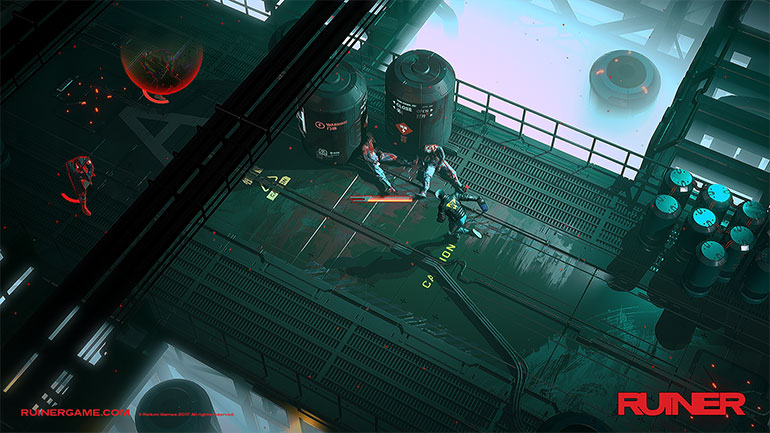 Q: The game has a unique visual style that seems to combine several elements into something new. Can you discuss the game’s visual influences and what the team was trying to achieve with the art style?

BS: Like you said - it’s just a little bit of anime and comic book love with a little bit of dark edge to it, maybe taken Carpenter movies, like Escape From New York. It’s all just stuff we grew up on. We had little problem maintaining the style’s coherence, because most of the team likes this kind of stuff. So, it was great fun most of the time. We weren’t thinking “Oh, this stuff is going to stick out, people dig anime,” but rather a process, building things upon things, progressively moving forward thanks to the involvement of the whole art team.

Q: From voice overs and effects to the actual soundtrack, the game’s audio also seems to play a large role in communicating the unique style of RUINER. What can you tell us about the team’s approach to audio?

BS: This is kind of a bleak world, and music has two functions in it. One is to mercilessly emphasize the heavy side - the action pieces are very strong, almost like a trance. The other parts, like Susumu Hirasawa’s music, add human element to all the techno craze. This results in a sense of disconnection, longing. All of these elements can make the game seem bigger, and add so much sense of place to the world. 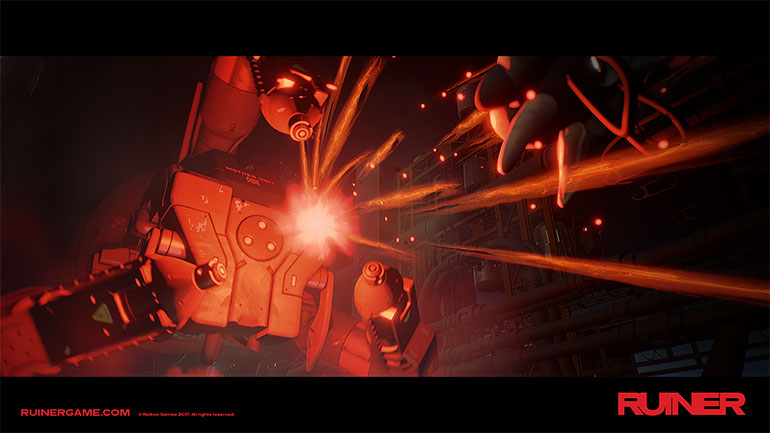 Q: Combat is obviously at the core of the experience in RUINER.  What can you tell us about the game’s arsenal of weapons and moves that players will have at their disposal?

JS: There’s a huge variety of weapons from pistols to rifles, from freezing guns to flame throwers, from laser cannons to plasma rifles. There are also different melee weapons, both one and two-handed, some with special attributes.

The core mechanic is the Dash ability. It enables you to move from one point to another in a split second. Altogether players have over a dozen gadgets with 50 upgrades. You can Overload yourself to become faster and deadlier, or you can use Focus Booster to slow down or even stop time and think more clearly.

There’s Energy Shield which allows you to bounce back projectiles or Kinetic Barrier to stop bullets or slow down opponents. You can play aggressively, charging with your shield into opponents and using explosive grenades - or more tactically: hacking them to create your tiny, one-time army.

What’s more, you can switch between your active gadgets on the fly, playing with different toys and adjusting them to your playstyle. You can even drop down weapons from the sky for unlimited firepower if that’s your thing.

If everything else fails, you always have your Ruiner gun and the old rusty trusty pipe.

Q: There are a variety of enemy types in RUINER. Can you explain what they are and how individual encounters with them might be different from one enemy to the next?

JS: From swarming Creeps to power armour-clad Exo Mercs, to super serious but light Guards and equally serious but much faster Triad assassins, they can use shields, they can dash, blink, come from above or behind. They generally cause you a lot of pain and suffering.

Altogether, there are seven kinds of humanoid enemies, each with a couple of their own specialized units using a variety of weapons, gadgets, moves, etc. And we still haven’t mentioned machines, security systems and AIs.

You shouldn’t underestimate even the weakest enemy because every one of them can ruin your day. There’s a variety of them but one rule remains true to them all: if you stop, you die. So you have to move fast and observe. Discover their strengths and weaknesses and the best ways to finish them. In the end, they’re all assholes. 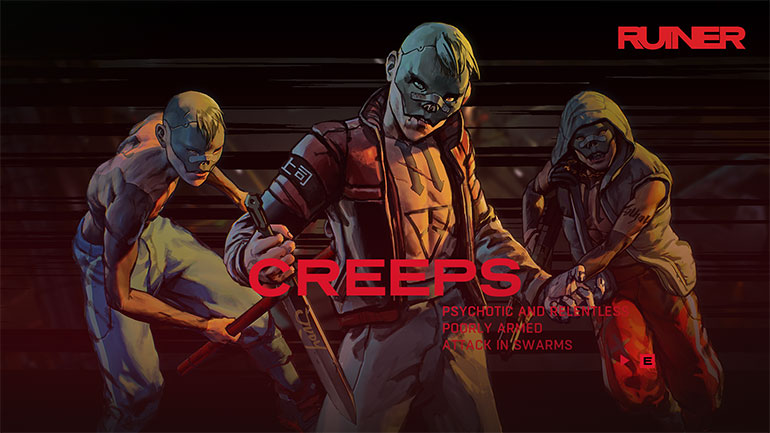 Q: What type of feedback have you gathered from the community throughout development and how have you applied that to the project?

MT: We’ve received tons of positive and enthusiastic feedback and we couldn’t have dreamt of a better reception to the game.

Players have liked RUINER so much that they’ve wanted to know more about the world. And we thought that indeed, there is so much content that we can make more accessible. So we’ve added a couple of side quests which give you a deeper understanding of Rengkok City and your character’s fate. There’s also a Database where you can read about almost any new thing - a location, an enemy, a weapon, a character, etc. - anything that you can encounter in the game.

Another thing we finally decided to change is RUINER’s difficulty. The original idea was to make the game ultra challenging, kind of like Dark Souls, and we were having a lot of fun facing the challenges ourselves (we were planning to add a tourist mode with extremely easy combat but that was still far ahead). For a long time we held that position, until we heard from focus testers who were all ultimately frustrated with the game and hated it, which was the cold shower we needed to finally address the issue which, by the way, had been many times before raised by Nigel from Devolver. Eventually we introduced three difficulty levels. The game is still challenging, even on easy, but it’s fair. And the hard mode is actually possible to beat.

Q: How big is the team working on RUINER and how long have you been working on the project?

MT: We started as a six-member team at the beginning of 2015. It soon turned out that the project has much bigger needs that we had assumed and it kept on consuming more and more human lives. At this moment the team is about 18 people. 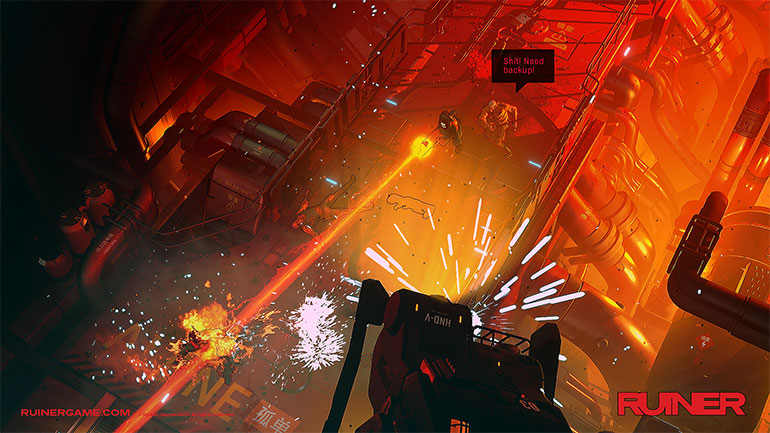 Q: What has it been like working in Unreal Engine to bring this project to life?

MT: It’s been quite fun actually. Unreal Engine at this point is quite a mature and developed platform - one of the best out there - which can satisfy any development needs. 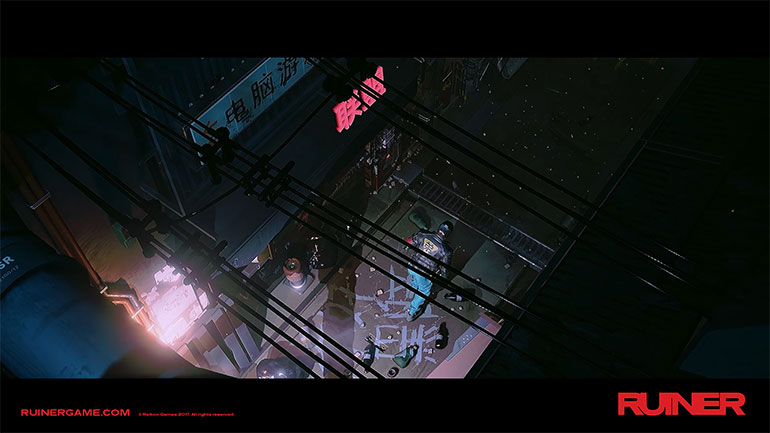 Q: Are there any aspects of Unreal that have proven to be particularly useful throughout development?

MT: The Blueprint system enables even inexperienced designers, or those who are not that much into coding, to start prototyping right away. Many guys on our team are beginners, so this has proven a great feature bringing them right into the heart of game development.

We also started using the new cinematic tool, Sequencer, from its very start and we’ve been very excited and happy with the direction it’s taken. Thanks to Sequencer, we have actual cinematics in the game.

Q: Where can people go to find out more about the game and to get their hands on it once available?