Rocket-blasting flamethrowers, building-sized bosses, attention-craving hugbots - it’s all business as usual in Mothergunship; an over-the-top FPS that combines the intensity of bullet-hell shooters and gun customization that breaks rules you never even knew existed.

A spiritual successor to the developer’s previous game, Tower of Guns, Mothergunship ups the ante with eye-catching visuals and incredible mobility. But, what truly sets it apart are the guns. Using a modular crafting system, Mothergunship lets players’ imaginations run wild, grafting weapons onto weapons to build outrageous conglomerations of destruction.

But, making a game like Mothergunship requires more than just obscene amounts of firepower. As Director Joe Mirabello knows, wrangling all that chaos into a fun experience for players requires both creativity and control.

What made you decide to create a spiritual successor to Tower of Guns instead of branching off in an entirely different direction?

It would have been a shame to waste the lessons learned from Tower of Guns. Tower of Guns was definitely a smaller, more experimental project, but Grip Digital and I built up a strong relationship while working on it. Moving from that to Mothergunship was a good way for us to continue that relationship on a new project. We were excited about the potential we saw in elements from Tower of Guns, and we really wanted to explore that together.

That said, while Mothergunship does inherit some of the unique bullet-hell and randomization aspects of Tower of Guns, it adds a lot of new elements to the mix. That’s the reason this isn’t a sequel; the more we scoped out what we wanted to build, the more we realized this thing needed an identity of its own. 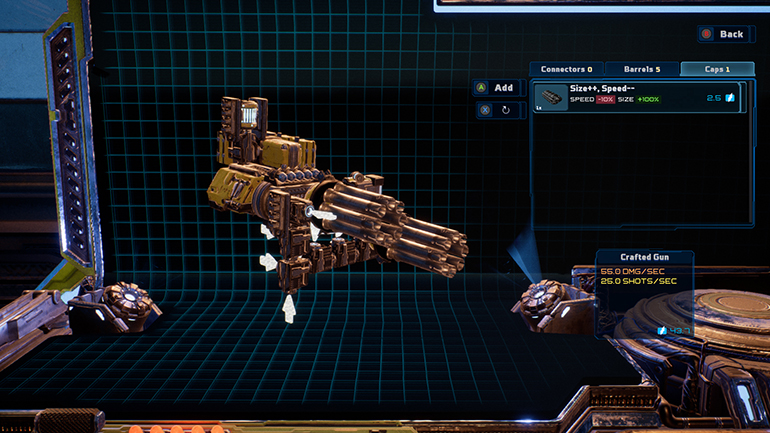 How does the gun crafting system work and what sort of possibilities are open to players?

Gun crafting in a first-person shooter is generally a grounded system with realistic art and preservation of the developer’s original design. There’s nothing wrong with that, however, Mothergunship is by nature far more over the top and open-ended with its crafting, taking more cues from modular shipbuilding in space simulations than from other first-person shooters.

In Mothergunship, you’re adding whole weapons onto weapons, attaching rocket launchers to flamethrowers, and adding unique modifier pieces that alter the entire gun’s behavior. We basically give the player a collection of building blocks and then do our best to get out of the way. If players want to build a gun with thirteen barrels that all have bouncing projectiles with splash damage, we let them.

There are, of course, some limitations for balance. The player must judge firepower against the gun’s power consumption, but overall we place very few restrictions on the player. This leads to really interesting results that can be both unpredictable and wildly entertaining.

Now that you have brought the game to conventions, what are some of the wildest guns you have seen people create?

There have been some really awesome guns made by people during the conventions; guns that take up the whole screen, guns that have fifty barrels, and guns that are hilariously top heavy. My favorite guns are always the ones that cause the players to really see the potential of the crafting system. It’s that moment when their eyes widen and they look at me and ask something like, “What happens when I add a bounce modifier to this triple-barreled flamethrower?” The answer: exactly what you think, and it’s glorious. That’s the moment where I feel the most pride in this game. 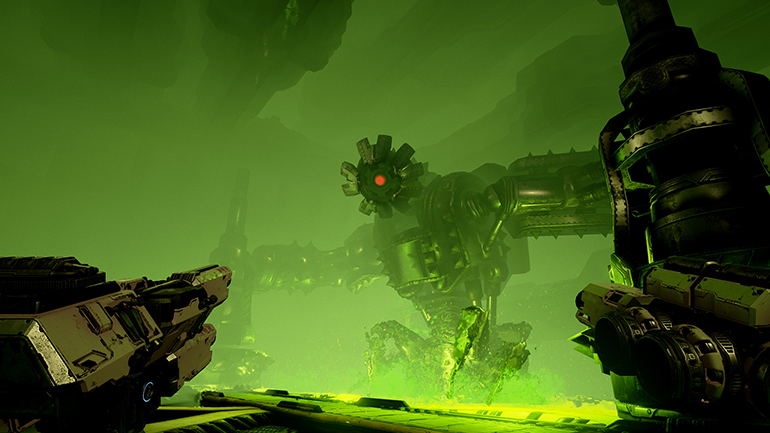 What kinds of bosses will players have to go up against?

The bosses in Mothergunship are intimidatingly, ridiculously, large. They’re also delightfully evocative of games like Contra and Metal Slug. This is not a game that holds realism in high regard, and so these bosses match your firepower toe to toe. A good example of the bosses in Mothergunship is the Pit Crawler. It’s essentially a gargantuan drill bit the size of an office building that chases you down long tunnels of lava. Players are immediately taken aback not only by the sheer size of the thing, but also how quickly it comes chasing the player, forcing them to carefully weigh whether or not running is the wiser option.

We typically hear "bullet-hell" in combination with shmups. Besides loading the screen with projectiles, what other elements go into translating that experience to an FPS?

In a single word; mobility. Bullet-hell games aren’t just about filling the screen with pretty patterns of bullets, although that’s by far the easiest element to describe. There’s also a sort of zen-like zone you can get into when it comes to dodging them, and much of that comes down to the accessibility of the mobility system.

In Mothergunship, for example, strafing is not something bound only to lateral ground movement. It can happen vertically as well. Mobility is a currency in Mothergunship, and we treat it as preciously as we treat a player’s health or a weapon’s energy. Some enemies, for example, aren’t designed to hurt the player directly, but rather, to support other enemies by disrupting your flow of movement through a map. The flipside of this is that we give the player many tools to help them get around efficiently, be it through mobility upgrades, environmental features, or even elements added to your gun in crafting. 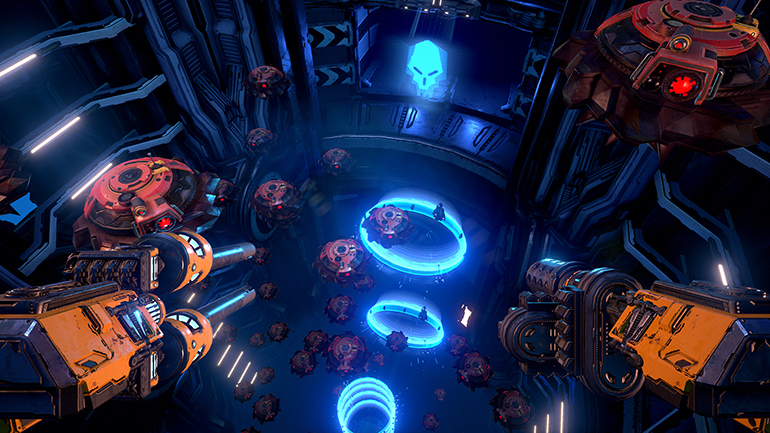 Ludicrous guns, colossal bosses, bullets everywhere - was there ever a moment you worried that you pushed too far?

Well, that depends. Pure chaos in a game is only fun for a short while, and what we really aim for is controlled chaos; setting up the player to feel overwhelmed for a brief moment, but also tempering that situation with a bit of restraint so that players can quickly read it and see a path to success. Performance is always a big consideration. I don’t want to have to cull out any more bullets than I have to in order to hit our desired performance targets, and so we’re constantly on the lookout for more tricks to squeeze out even more bullets.

Why did you choose Unreal Engine 4 on this project?

I’ve used Unreal Engine for 10 years now and have become quite proficient with it. Tower of Guns was built in Unreal Engine 3 as was a number of Grip’s Digital’s projects, so we both had a solid amount of experience. I had also had a positive relationship with Epic during the development of Tower of Guns, and I continue to foster that relationship even today. Put simply, I like Unreal Engine. Other engines are powerful too, but I was interested in hitting the ground running and making this project as awesome as possible, as fast as possible. UE4 makes that possible.

Is there a feature that has stood out as being particularly beneficial during development?

Rather than a specific feature, I think it’s better to call out the core philosophy of giving more power to artists and designers. This must have been a terrifying plan back when Epic’s team started down that road, but the results are clear; the less time artists and designers spend going back and forth with engineers, the more time they have to iterate on their own work and make it stronger. Whether it’s the material tools, the cinematic tools, or even Blueprints themselves; UE4 does whatever it can to place creative control in the hands of those who need it, rather than requiring it to be chained through several disciplines. 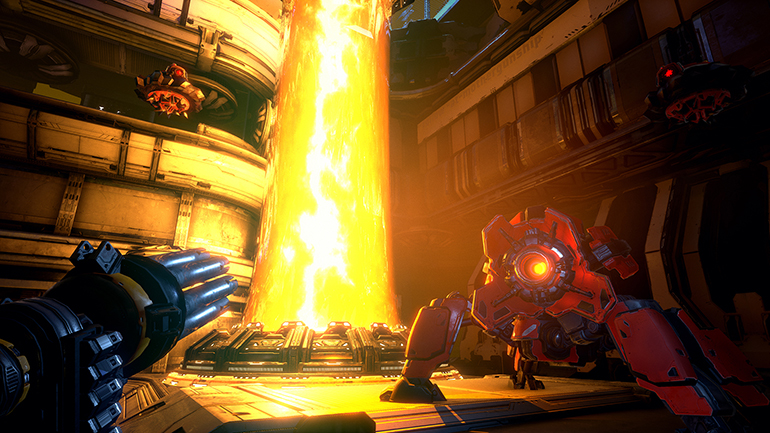 You were recently awarded an Unreal Dev Grant. How has that aided development?

It made things like bringing the game to trade shows, increasing staff, and creating additional content much more feasible. The grant also brought with it a bit of prestige and validation. It’s easy to have faith in your own project, but it’s something else altogether when an external judge tells you they have faith in it as well. It’s a massive morale boost and the value of that cannot be overstated.

Where should people go to stay up-to-date on Mothergunship?