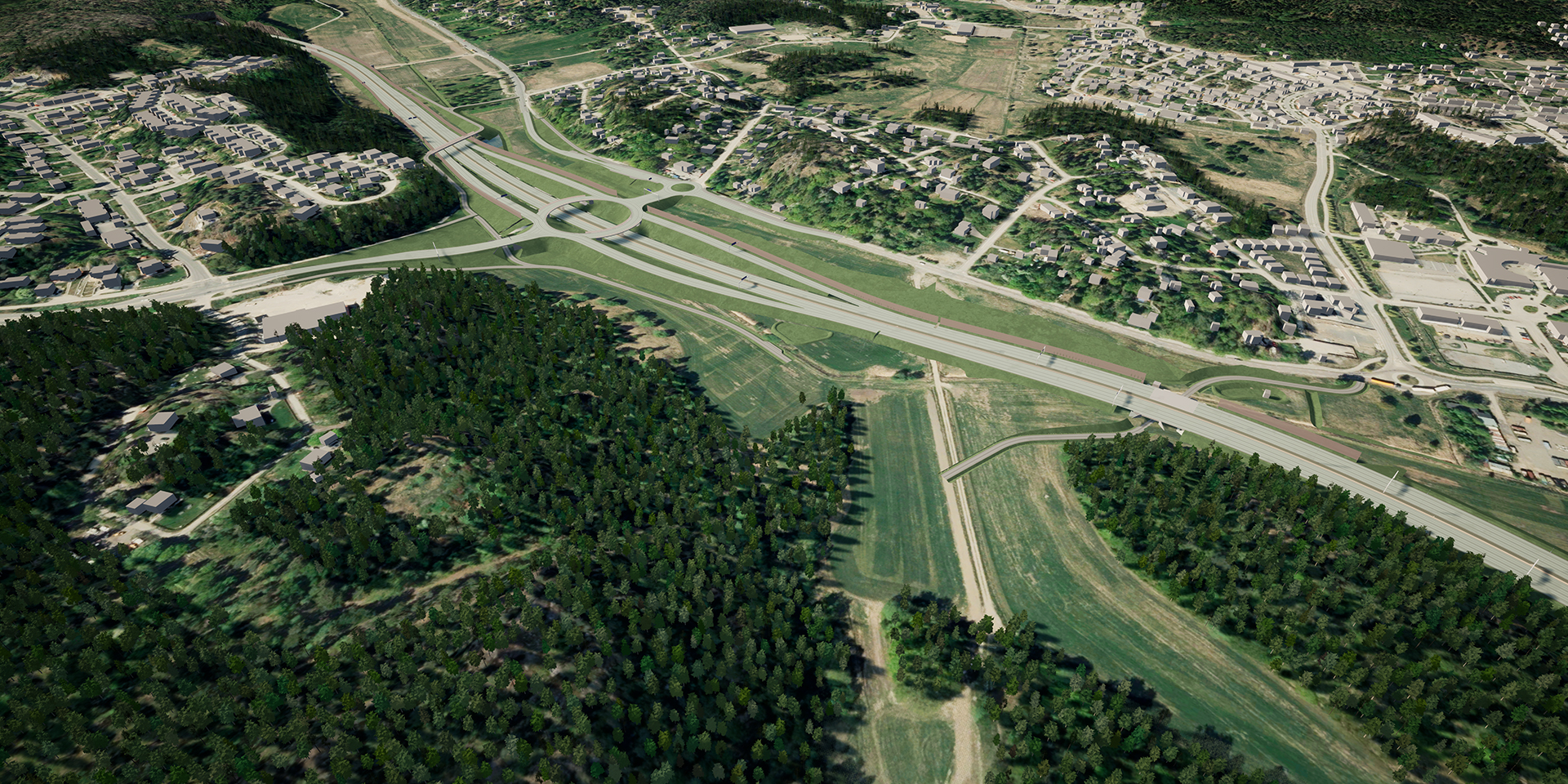 That’s what the residents of the arctic town of Gällivare-Malmberget in Swedish Lapland are currently facing, as an expanding iron-ore mine is forcing the relocation of their city in a project estimated to cost over one billion US dollars and take nearly two decades. The redevelopment will affect almost 2,000 homes, along with historic buildings, offices, and industrial facilities. Public buildings like the retirement home, high school, and indoor swimming pool will be torn down and replaced. 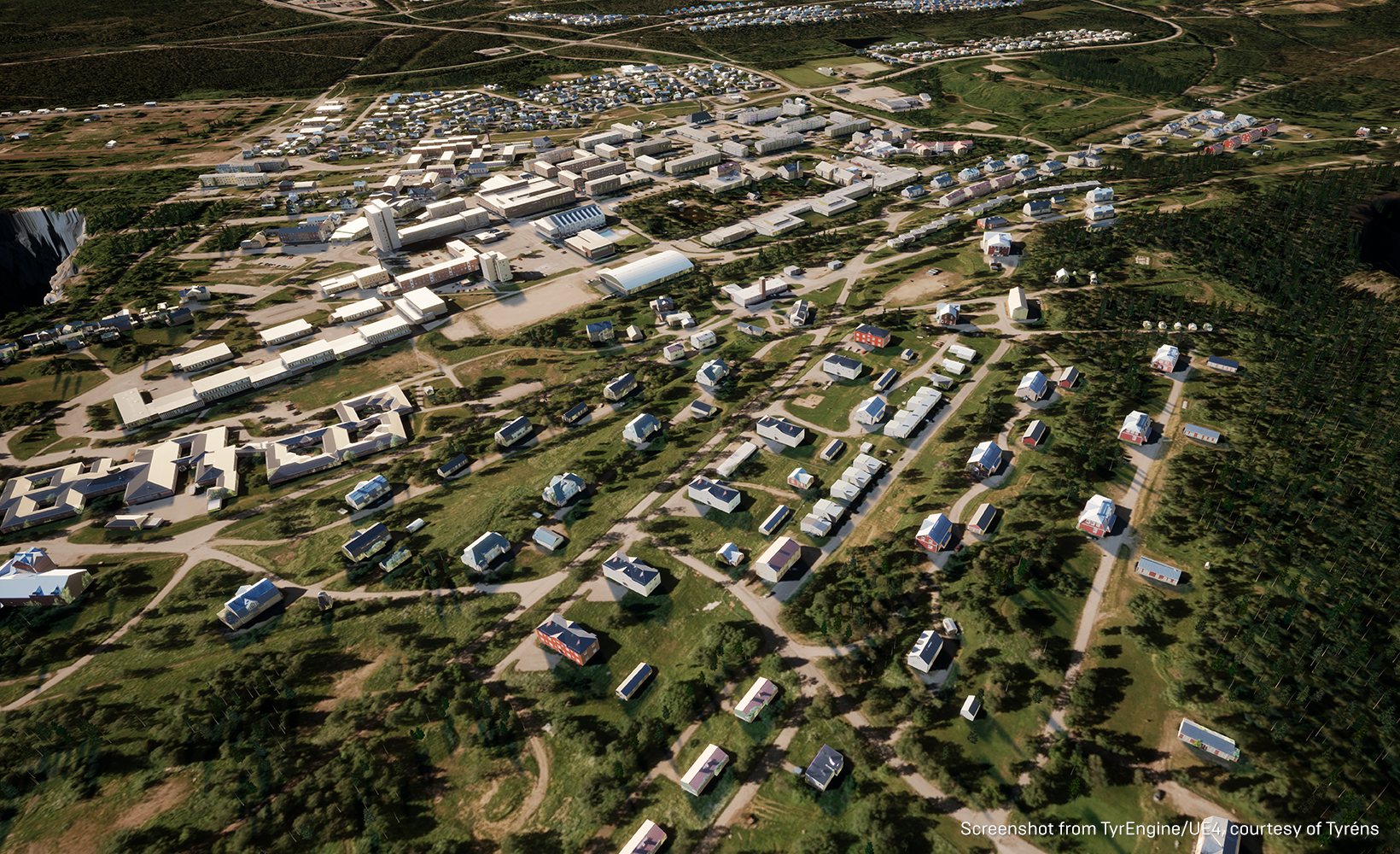 An area of Gällivare that will be relocated.

Clearly, this kind of news can be disconcerting—to say the least—to those affected. That’s why Tyréns, one of Sweden’s leading community development consultancies, was brought in to help plan the redevelopment. Part of their mandate was to make sure that the designs were clearly communicated to the public, and to solicit their feedback.

Founded in 1947, Tyréns focuses on creating sustainable solutions in the fields of urban development and infrastructure. They’re keenly aware that visual communication is of paramount importance in their industry, and for many years have created static renderings and animations in applications such as 3ds Max to facilitate that.

By 2013, advances in real-time rendering were sufficient for the company to take the leap toward creating interactive visualizations, motivated by the desire to save time and also to quickly offer clients any view they desired. After investigating all the major platforms available at the time, they selected Unreal Engine 3, which they customized into their own platform, called TyrEngine.

“Unreal stood out as the platform with a clear path of progression,” says Jonas Gry Fjellström, Visualization Expert at Tyréns. Gry Fjellström was brought into the company for his expertise in real-time 3D, acquired from his previous work in the video game industry. 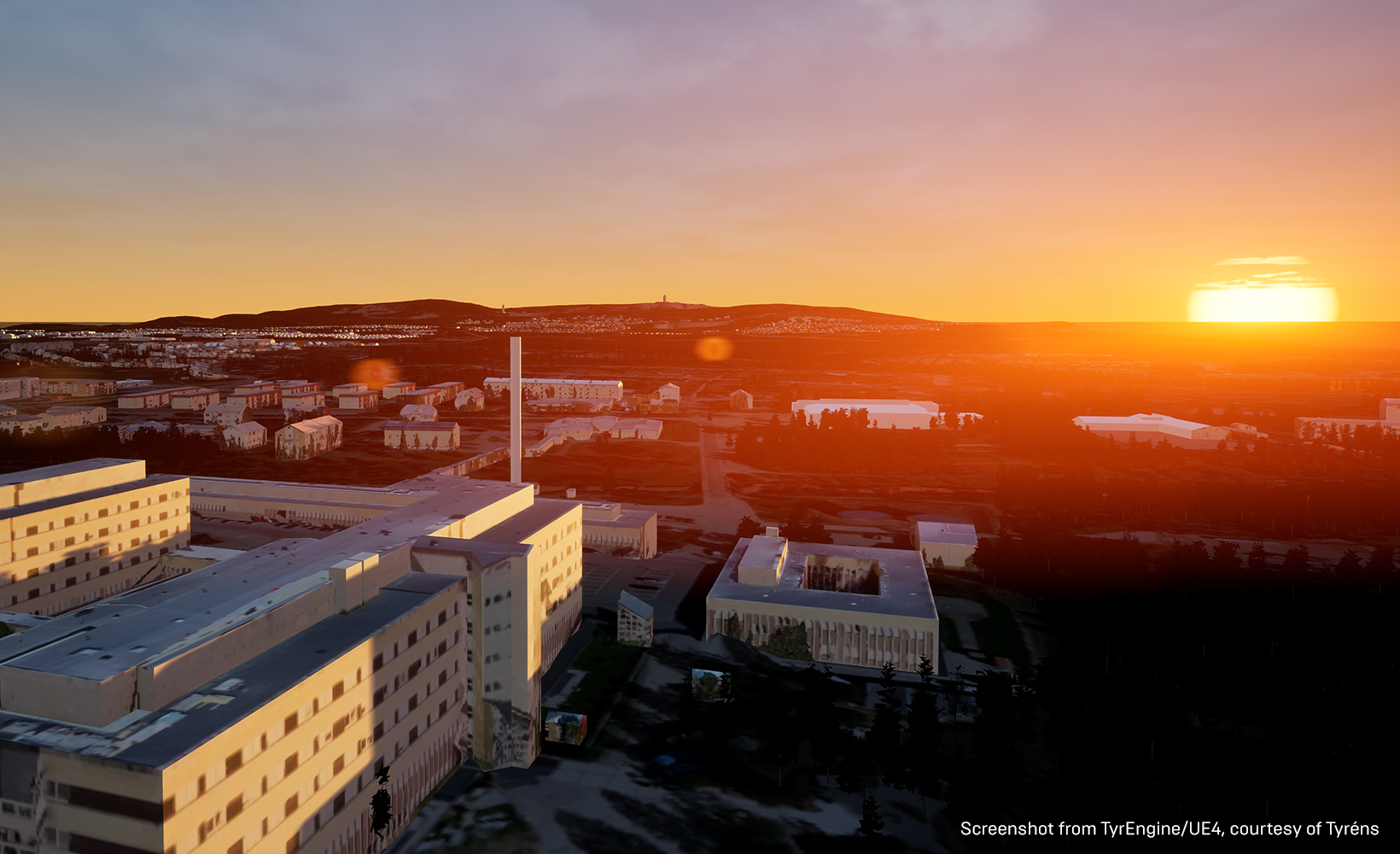 The Gällivare redevelopment was the first project to make use of TyrEngine. Tyréns created a white-box 4D model to show how the changes would happen over several years, from the demolition of existing buildings and construction of new ones to the physical relocation of certain buildings. The visualization has been used as a platform for discussion internally in the state office.  By the project’s completion, the citizens will have a brand new city center, boasting a state-of-the-art education center, a sports and culture hall, and an ice and event arena, not to mention a leafy new city square disguising plenty of underground parking. Tyréns has showcased all of this in a second, fully textured incarnation of the final city model—an area of land over 72 km2—which members of the public are able to navigate and provide feedback on. This effective visual communication has resulted in constructive dialogue and broad acceptance, even positivity.  The Gällivare redevelopment project is still ongoing, although TyrEngine has evolved along with Unreal Engine. With the advent of Blueprint visual scripting in Unreal Engine 4, TyrEngine became an even more powerful platform. “Suddenly it became very easy for a small team like ours to make interactions and functions that we could use to make our presentations even better,” says Gry Fjellström. 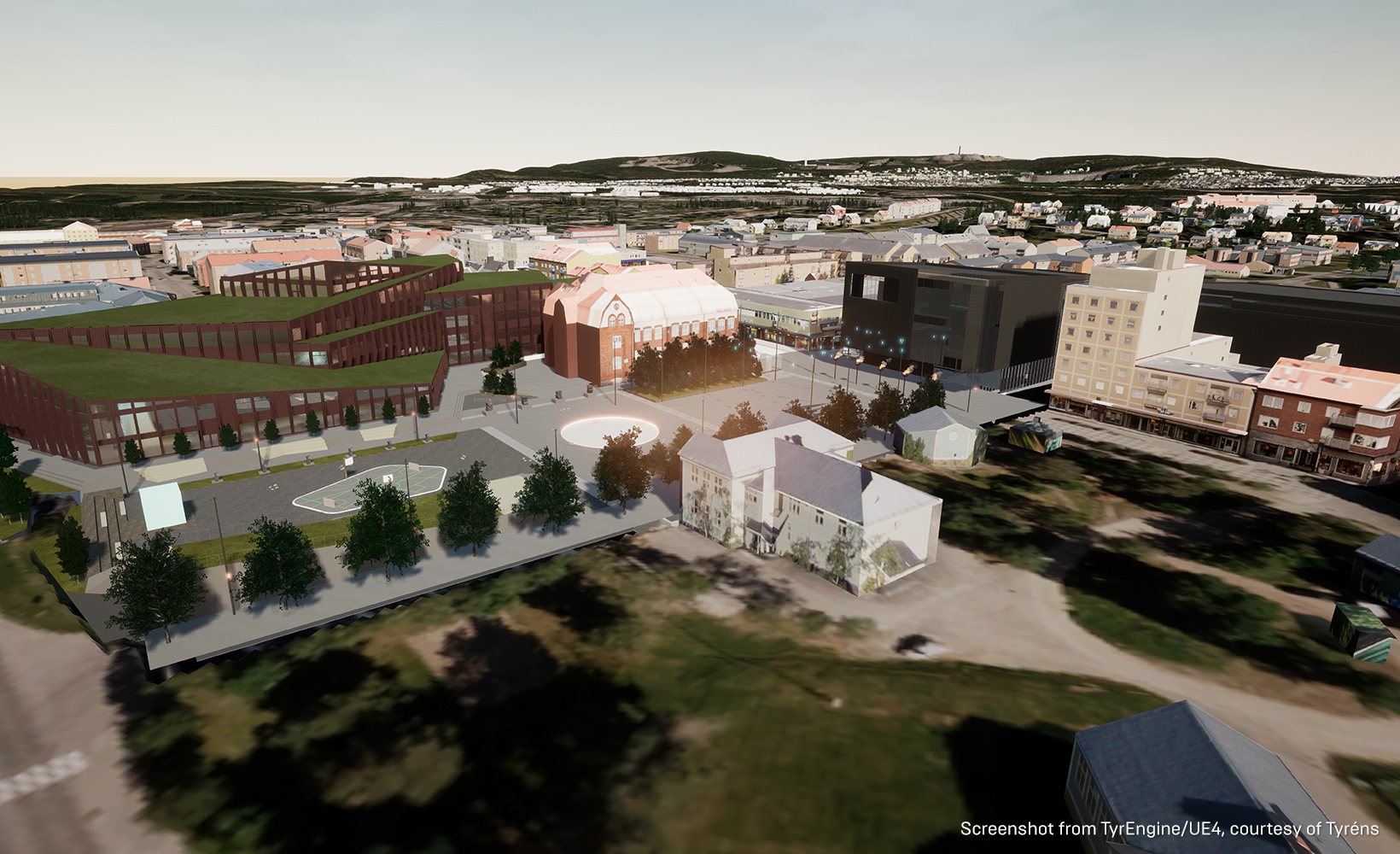 A view of the centre of Gällivare scheduled for completion in 2023.

To date, the team has worked on more than 50 projects in TyrEngine. These vary from small indoor visualizations to large-scale urban and infrastructure developments, including one project that involved modeling 120 km of railroad tracks.

One such large-scale project currently in progress is the planning of 20 km of new roads, tunnels, and buildings for Trafikverket (the Swedish Authority of Transportation). As with the Gällivare project, the real-time model has acted both as a coordination platform for construction and planning, and as the consultation model for communication to the public. 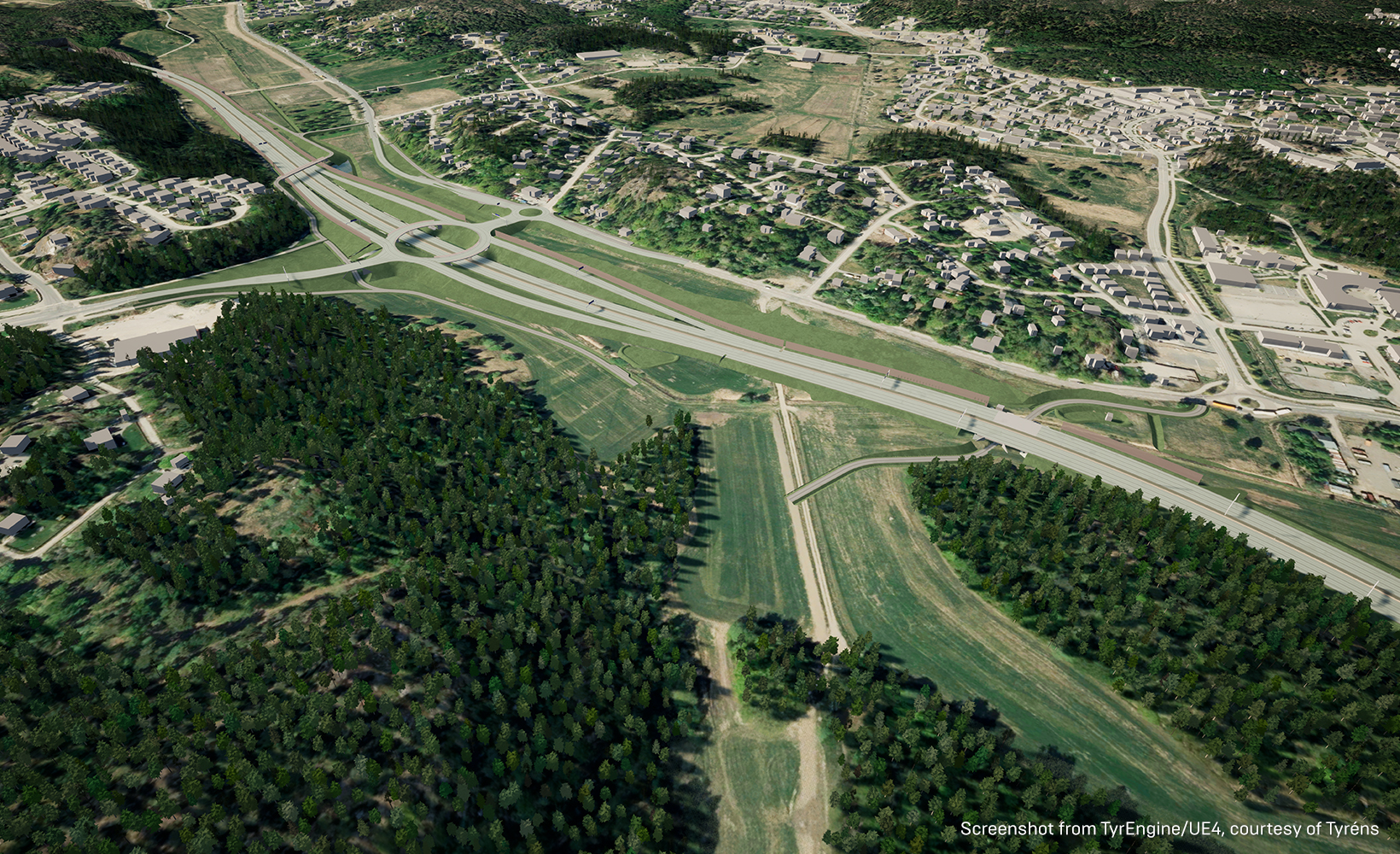 One of the ten larger junctions of The Södertörn Crosslink, a 20 km road construction project.

The amount of data required to accurately model the entire affected area presents a challenge, requiring the incorporation of orthographic aerial photos for landscapes and terrain, and geometric information for existing buildings and other details in the environment. For such a vast area, these elements can quickly accumulate into a massive scene. 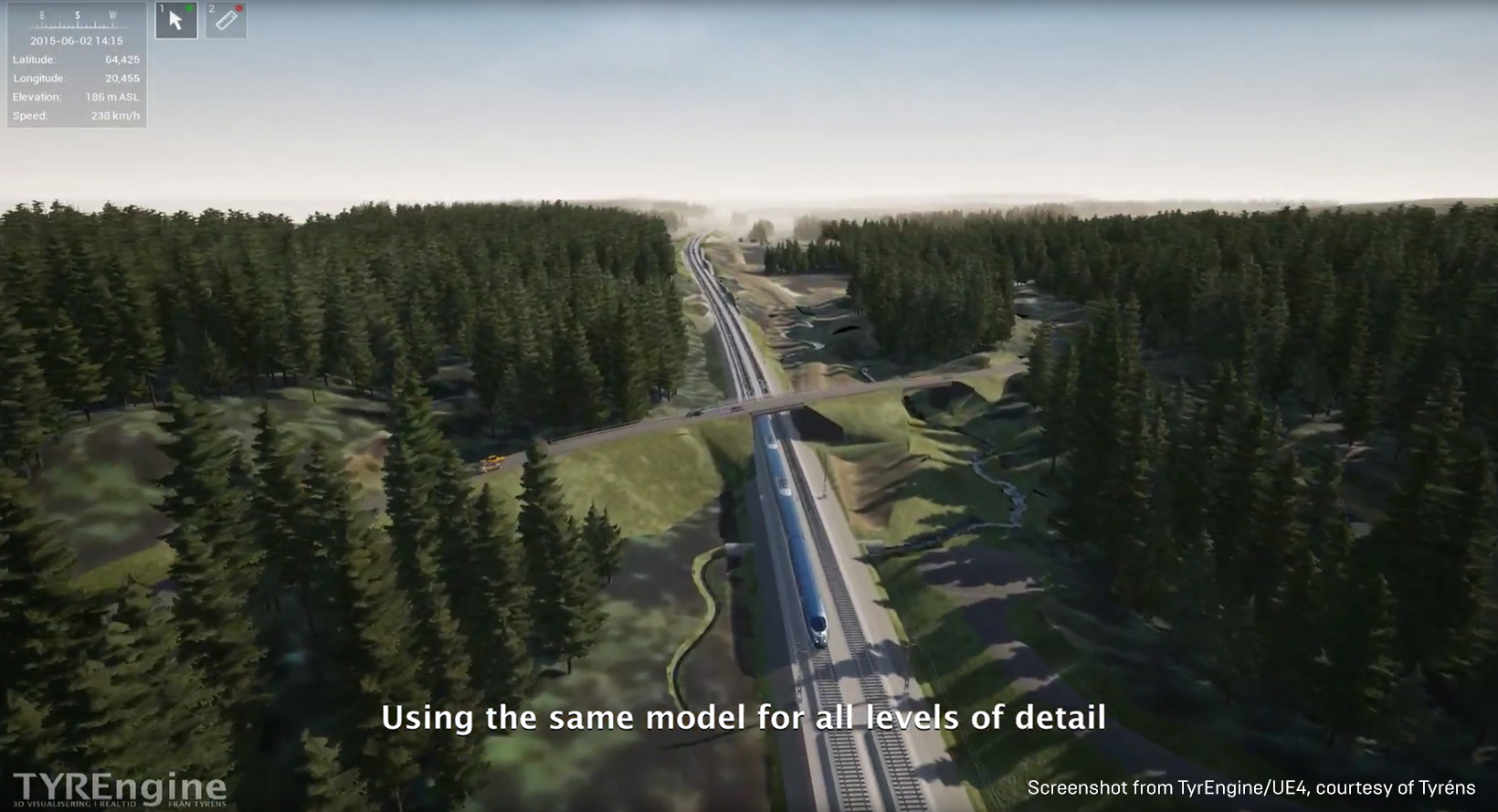 A railroad project in the south of Sweden.

“The closer we get to reality, the more flaws we will find—so it’s important to find the ‘good enough’ detail level,” says Gry Fjellström. “Since we’re not making sales material, we strive for the correct look rather than the pretty one.”

On top of the real-world visible data, the team has to include information from GIS data, such as areas of historical importance, water protection areas, and nature reserves. The planners can then use this information when determining the route of the road to minimize its impact on these sensitive areas.

The team also added a UI that accurately set the sun position for a particular date, time, and latitude/longitude for light and shadow studies. A similar feature was later released by Epic in Unreal Engine 4.21. 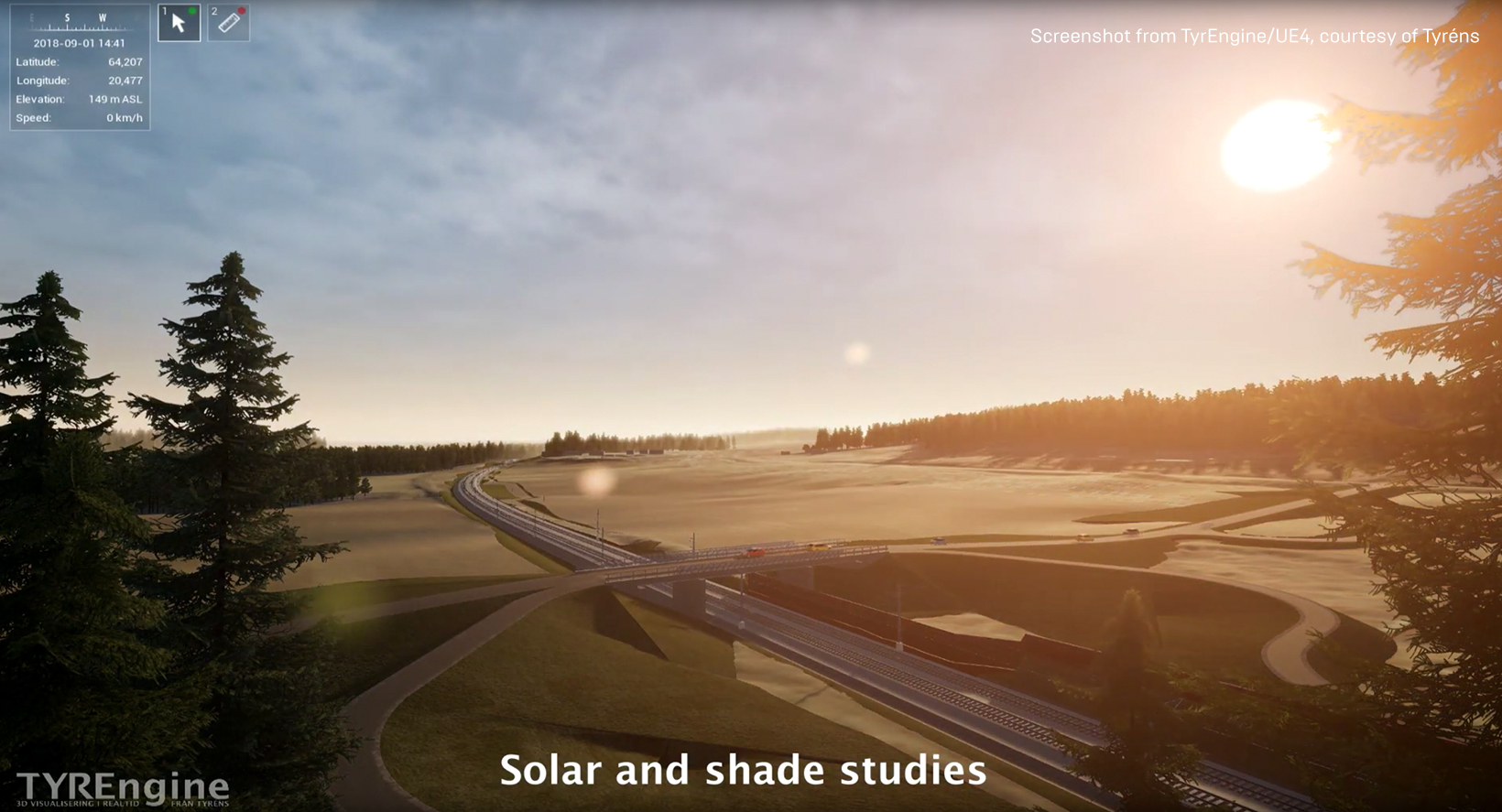 Sun and shade study at an overpass in a railroad project.

Other features Tyréns provided were interactive measuring tools, the ability to display metadata such as part names coming from the BIM application, toggles for displaying data with various tags, and the ability to view the model in X-Ray mode to see underground features such as tunnels. 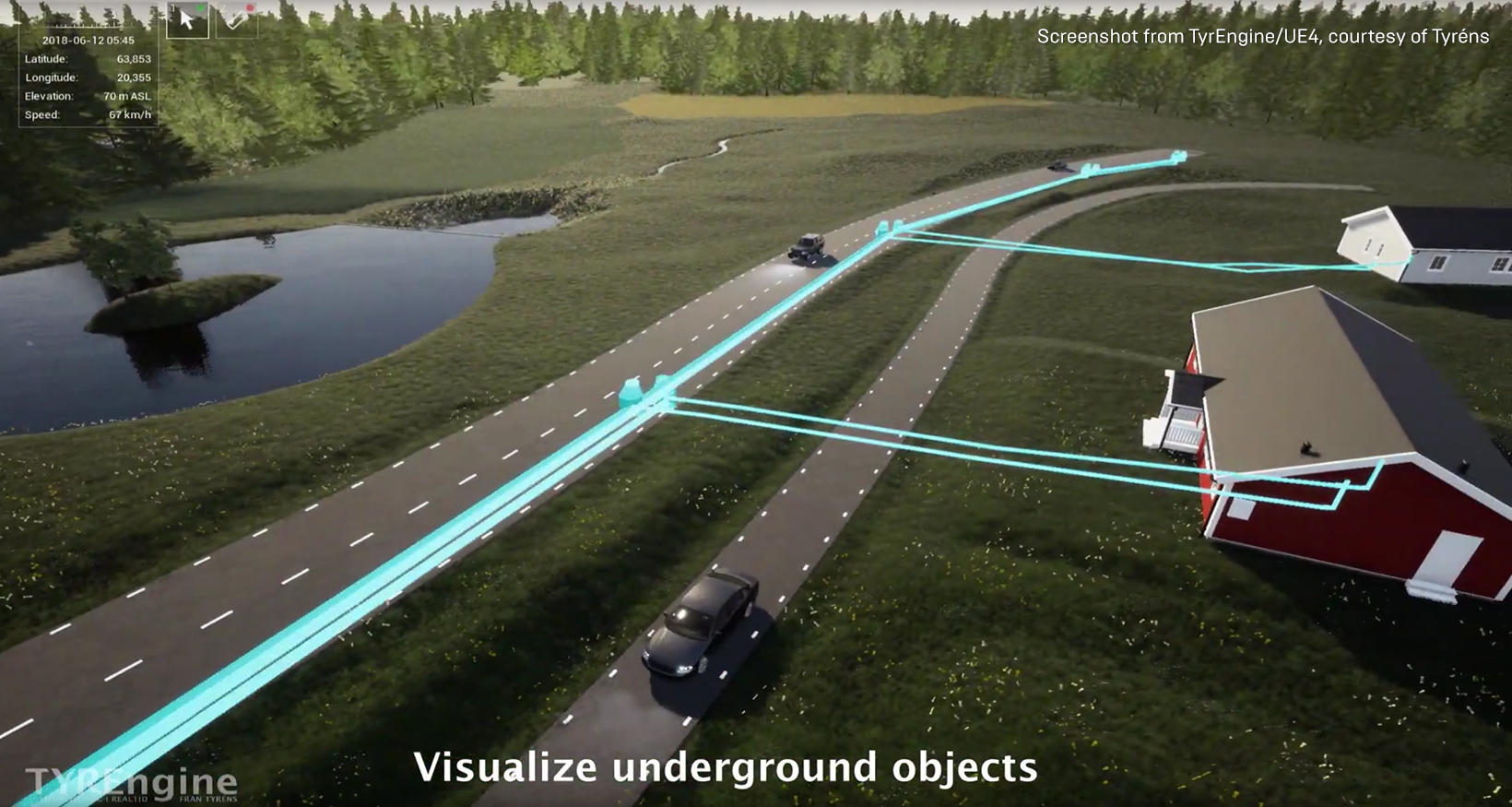 Example of how to visualize objects underground.

The ability to extend Unreal Engine for their own purposes is just one of the things that makes it attractive to Tyréns. “We love that we have the C++ layer so we can add our own tools and algorithms into the mix,” says Gry Fjellström.

The planned road structure was built in Civil3D and cleaned up in 3ds Max before being integrated into the model of the existing landscape, providing an accurate interactive visualization of the proposed development. The project has been very well received by the client, the planners, and the public.

“They’re always amazed over how real time is so much more understandable and flexible than static images or blueprints,” says Gry Fjellström. “When they see the results, they get an understanding of the power to be able to communicate between levels of expertise and between different fields of knowledge. A real-time model can solve a lot of questions right away that would otherwise have to be reviewed at another time.”


Sharing the experience with Pixel Streaming

As well as showcasing the development to stakeholders on a kiosk-based PC, Tyréns took advantage of Pixel Streaming to communicate with remote viewers on lightweight devices like iPads and smartphones. 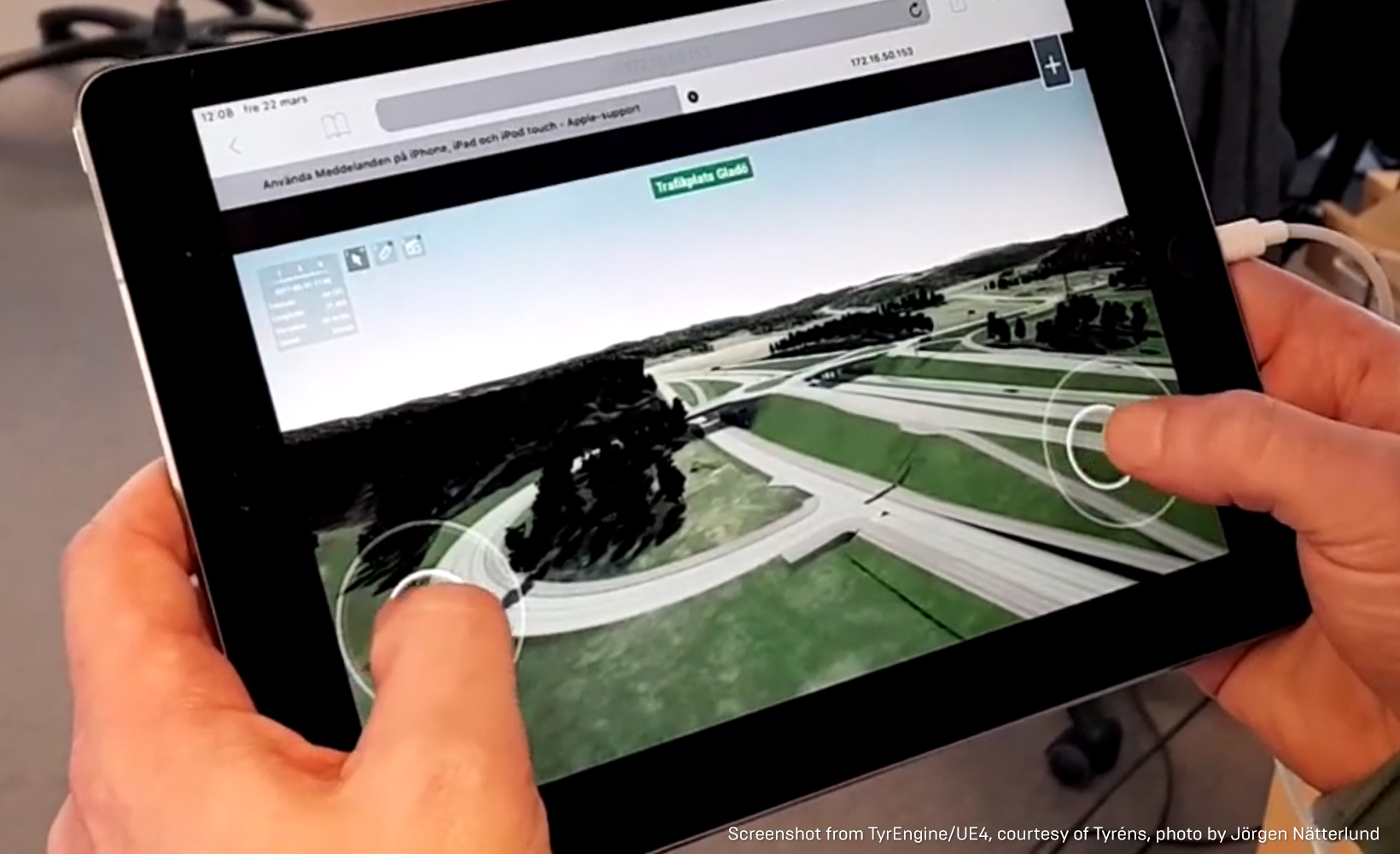 Introduced in Unreal Engine 4.21, Pixel Streaming enables you to stream workstation-quality content to almost any web browser on any platform, without the viewer having to download or install anything—they simply access a link as they would to view a YouTube video. But unlike watching a video, the viewer can interact with that content, and even send responses back to the engine.  “Pixel Streaming gives us a good interface for collaboration, public communication, or just for showing our work,” says Gry Fjellström. “It’s a powerful tool, especially when you’re trying to explain things to people remotely. It’s so much easier and faster than video. Viewers get 30 frames per second and they can interact with it. It really extends everything we want to achieve with TyrEngine.”


The road ahead for real-time technology

Gry Fjellström has been involved with real-time technology for just about as long as real-time technology has been around. He had been working in the game industry for more than 15 years before starting at Tyréns in 2013, and he’s been working with Unreal technology for most of that time. “The first contact I had with Unreal was back when Unreal Tournament was released, and I found the UnrealEd that allowed me to start making level design and interactive 3D art,” he says.

Since then, he’s worked in the professional game industry in various studios around the world, and his resume includes working on several large Unreal-projects such as Rainbow Six and Splinter Cell at Ubisoft Montreal. So how does he feel that real-time technology will be used in the future, and what excites him about the road ahead?

“I believe that we will increasingly use external data to bring even more functionality to our real-time models,” he says. He goes on to explain that Tyréns is experimenting with digital twins of buildings inside of Unreal Engine, as part of what he calls “a living 3D management system”.

Working with a local university, they’re in the process of creating a complete digital twin of an innovative dental clinic, which is designed to prototype new and evolving technologies, and features a virtual receptionist. Using Unreal Engine’s multi-user collaboration and avatars, they’re able to present the clinic to interested parties without physically being there. 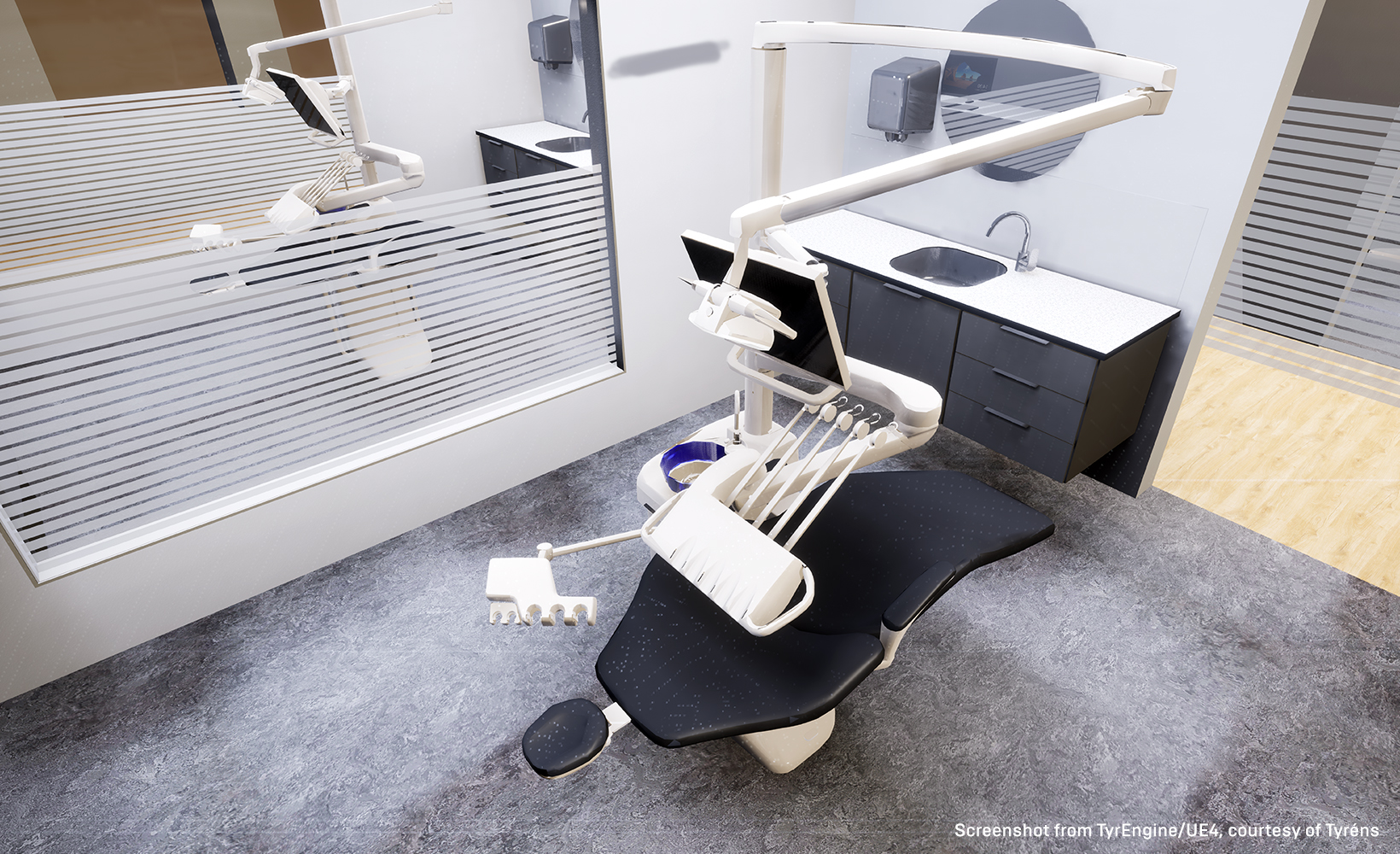 Digital twin of an innovative dental clinic in Sweden.

In another experiment, sensors underneath desks in the Tyréns office determine when seats are occupied, triggering motion on the chairs in a digital twin model. The idea is to gain a new level of understanding of how people move and to visualize the flow of movement over time in a building.

“It’s kind of funny to watch your own office chair indicate movement when navigating in the office, but you do it in Unreal,” he laughs.