Belinda Ercan |
June 2, 2021
Architecture
Design
SHAU
Twinmotion
Visualization
West Java’s steamy tropical city of Bandung is better known for its teeming markets, reclaimed Dutch colonial buildings, and thriving art scene than for its nature. But among the urban sprawl, you’ll find green spaces dotted here and there that offer respite from the traffic and chaos.

In one of these oases of calm, an architectural gem lies waiting to be discovered.

The Microlibrary Fibonacci in Kolam park, with its spirally arrayed curved concrete ribs and moss-textured lightweight roof, has been designed to coexist harmoniously with nature and trees.
Image courtesy of SHAU
It’s a great example of sensitive, thoughtful architectural design that blends seamlessly into the context of its surroundings.

Like all architectural projects, however, getting there was no straight line. For many months, it looked as though the unique concept would remain an idea only. Fortunately, SHAU, the architectural firm behind the design, had the tools and skills to deliver a compelling real-time presentation that convinced the client to take the project from concept to build.

And that strikes at the heart of one of an architect’s biggest challenges—it’s one thing to come up with the perfect design, but how do you convince the client that this one has to be built?

Florian Heinzelmann knows a thing or two about convincing clients of bold ideas. The co-founder and director of SHAU has taken many projects from concept to completion, ranging from public spaces, libraries and cultural buildings to residential and apartment buildings.

The ability to clearly communicate ideas to stakeholders in a compelling way is key to bringing design concepts like these to fruition. That makes the quality of your visualization tools key.
Image courtesy of SHAU
Over the course of his career as an architect, Heinzelmann has tried many different visualization software packages, from Lightscape back when he was a student to solutions like 3ds Max and V-Ray later on.

In recent years, he’s become a convert to real-time visualization tools such as Twinmotion, thanks to their fast WYSIWYG (what you see is what you get) workflows. “There’s no fumbling with settings, then pressing render, waiting, and reiterating until you’re happy with the result—the changes appear directly on screen in real time, and the exported image or animation looks like what you’ve seen before—no surprises,” says Heinzelmann.

Fast and easy workflows don’t just provide a smoother and more enjoyable way of working for architects—they can have real-world business advantages, too. For the Microlibrary Fibonacci, the ability to iterate and communicate new ideas quickly was a factor in taking the project from an unbuilt concept to a real-world building.

SHAU designed the first iteration of the Microlibrary Fibonacci in 2016, winning the LafargeHolcim Silver Award for the Asia-Pacific Region for the project the following year. Despite the firm’s best efforts however, it was unable to get the project built.

After building several microlibraries, including the Warak Kayu in the Javanese city of Semarang four years later, SHAU presented its client PT. Kayu Lapis with new designs for the library in Bandung, completely reimagining the design as a timber structure.
Image courtesy of SHAU
The team used Twinmotion to create a compelling visualization of the library set within the context of a lush green park. “Twinmotion helped enormously to model that—but also to show how plants could be integrated into the actual design and building,” says Heinzelmann.
Image courtesy of SHAU
The presentation was convincing enough that the project is now intended to start construction in 2021. What’s more, putting this winning pitch together didn’t require exhaustive man hours or costs. “In terms of modeling and UV mapping, there are a lot of similar and repeating elements,” says Heinzelmann. “When arranged and prepared properly, you can just drag and drop textures inside Twinmotion and try out different material variations easily.”
Image courtesy of SHAU
Heinzelmann estimates that the team saved huge amounts of time thanks to the ready availability of the assets in Twinmotion. “Sure, with other software packages there are textures available, but not people, vehicles, and especially plants,” he says. “Planting a whole forest around the building, sculpting a landscape, brushing on grass and foliage in no time is simply awesome.”

Of course, it’s great to be able to present a polished virtual tour of the building to the client, but visualization is also key early on in the design process.

It’s much easier to convince a client that a particular design decision makes sense if you can bring the latest model into a real-time tool and walk through it to evaluate different concepts or design options, and demonstrate how those decisions appear from a first-person view.

When SHAU won the bid to design the Teater Indonesia Kaya, a performing arts center in Jakarta, the ability to quickly and easily jump into designs was paramount for the smooth running of the project. 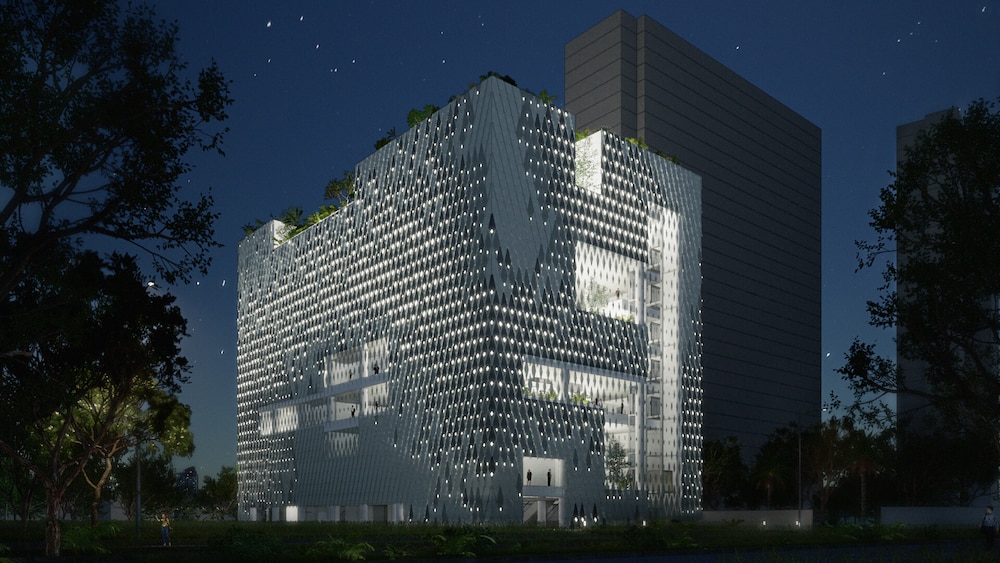 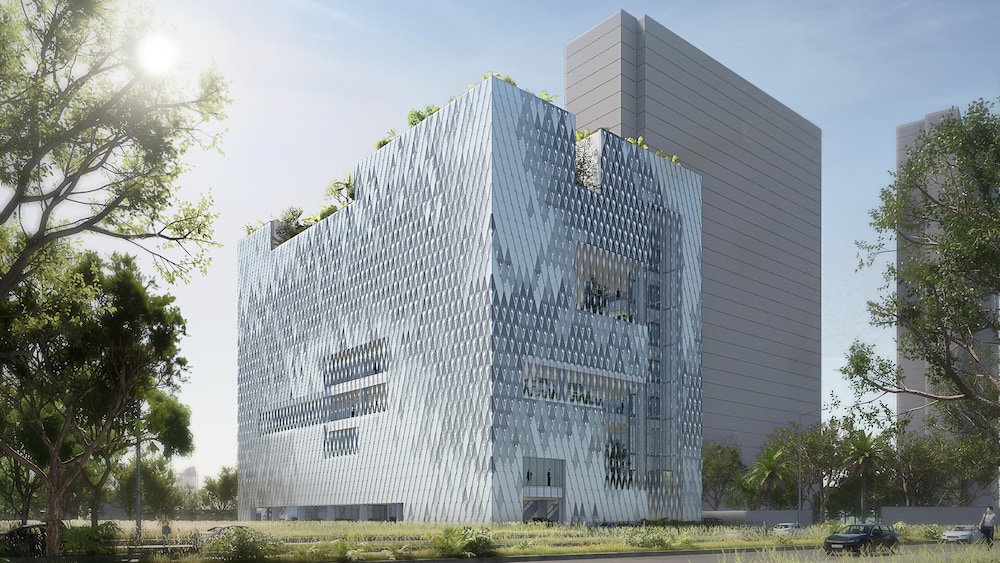 Image courtesy of SHAU
The brief for the project was not set in stone at the beginning, and the client sought an architect who would enable them to be an integral part of the design and decision-making process.
Image courtesy of SHAU
That made Twinmotion an important part of the project toolchain early on. “It was a participatory project with the client, where the principal conductor and head of orchestra was originally a trained architect himself,” says Heinzelmann. “We had quite an intense and iterative design process where the building evolved into something much bigger than anticipated earlier on. Having the ability to crank out a lot of good-quality visuals and design options in no time helped tremendously.”
Image courtesy of SHAU
The onset of the COVID-19 pandemic posed a further challenge when it came to communicating design progress—both internally amongst the SHAU team and also with the client.

The team has not been to the office for over a year now and its staff works from home. Nor have they met the client physically since 2020. Instead, the team has found a way to collaborate remotely by sharing Twinmotion project files and walking through the project with the client over Zoom. “Being able to show the client the consequences of certain requests swiftly by literally walking around and asking, ‘Are you sure you want that?’ is invaluable,” says Heinzelmann.

Aside from pitching concepts and taking clients through the design process, real-time visualization tools have an advantage over offline renders in the sheer amount of images and videos that can be created on the fly.

Up until now, facilitating off-the-cuff requests from clients for imagery or video has caused architectural firms a bit of a headache, in terms of the unaccounted-for time it takes to fulfil these requests.

Having to Photoshop people and trees into every single image was a limiting factor for a lot of architects. “You had to limit the image production, factoring in the time and effort this takes during post-production,” says Heinzelmann.

When SHAU was working on a landscape design project for a park in Pangandaran, West Java, the team was faced with one such late request for marketing materials.
Image courtesy of SHAU
It was the day before the groundbreaking ceremony, during which the governor of West Java was due to give a speech, and the team was asked by the officials if it had any visual material ready that could be used to print on banners.

Previously, that sort of last-minute request might have been the signal for an architectural firm to go to panic stations, but with the ability to render out images and videos in minutes with Twinmotion, SHAU was able to meet the request with minimum stress.

“We just resynced the updated geometry and cranked out the renders in a day,” recalls Heinzelmann. “This material was not produced as a part of a client communication strategy or even to help design decisionmaking but purely to provide a representation of how the built project was supposed to look, in a very limited timeframe.”
Image courtesy of SHAU

On each of these projects, real-time visualization has enabled SHAU to better communicate with its clients.

The company's success with real-time tools sheds light on an interesting paradox: architects are busy and don’t want to spend ages learning new tools, but technology is improving all the time and providing faster and easier ways of doing things.

How can architects reap the benefits of these quantum leaps forward?

The obligation is on software providers to build tools that are easy for architects to learn and use. Twinmotion is a great example of this ethos at play.

“I learned Twinmotion in literally half a day,” says Heinzelmann. “Being able to drag and drop 3D assets or textures into the scene works like a charm. Of course, figuring out more specific features and improving the visuals took a bit longer, but the entry threshold was really low.”

With anyone able to get to grips with the tool easily, it can be rolled out across teams in a matter of days. “We can basically teach it to our staff in half a day, let them play around with it for a while and they get it quite easily,” says Heinzelmann. “With that, everyone in our office can do the visualizations on their own, which in return also adds to greater project ownership within the team and resilience within the projects.”

This ease of use has seen Twinmotion slot seamlessly into SHAU’s toolchain. “It’s become a vital part of the design process,” says Heinzelmann. “I can see Twinmotion being a central aspect for presenting a project in real time, and I would like to see how it can work for project communication, not only with the client but among the various disciplines involved in the design and planning process.”

Recently, Epic Games and filmmakers’ collective Bullitt assembled a team to test out the latest in-camera VFX toolset, part of the extensive suite of virtual production tools in the upcoming Unreal Engine 4.27 release. To put each of the tools new through their paces, they created a short test piece to mimic a production workflow.
Spotlight

Recently, Epic Games and filmmakers’ collective Bullitt assembled a team to test out the latest in-camera VFX toolset, part of the extensive suite of virtual production tools in the upcoming Unreal Engine 4.27 release. To put each of the tools new through their paces, they created a short test piece to mimic a production workflow.