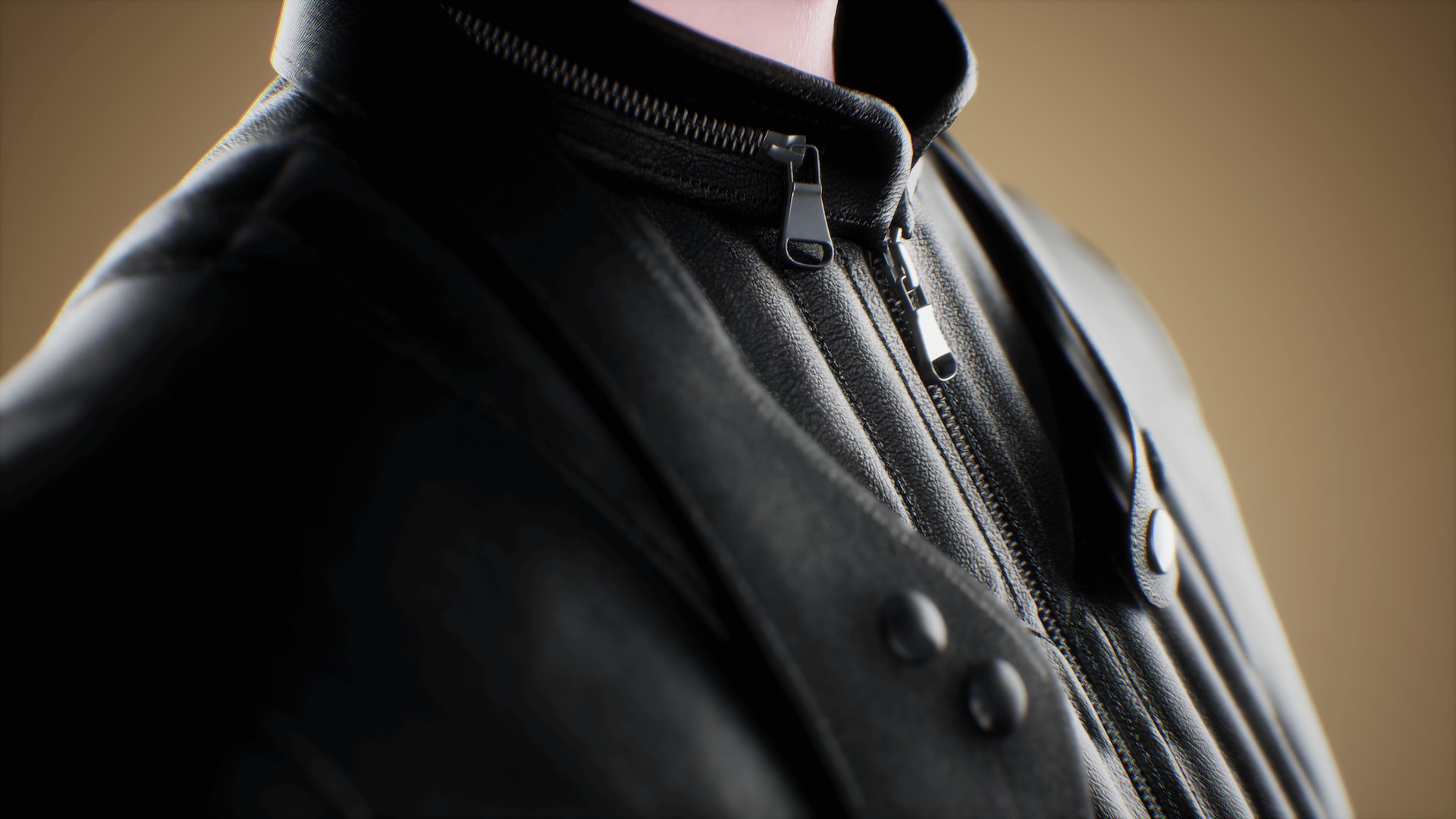 Real-time technology is a perfect fit at BODS

October 15, 2021
BODS
Blueprints
Fashion
KHAITE
More Uses
Pixel Streaming
Ray Tracing
Christine Marzano met Alexander Shatalov while working together at another avatar animation company Christine had previously co-founded. Alex was the head Unreal Engine developer and technical artist, and Christine had an extensive background in fashion, working for the likes of Dior, YSL, and Gucci, and as a fit model for Victoria Beckham and others.

“In 2017, I was the first person with fashion model experience to create my own photorealistic avatar,” Christine says. “I started animating it with Unreal Engine, via mocap suits and different methods of facial capture, and I knew it was absolutely the future.”

The two saw an opportunity to bring the world of fit-tech—the science of fitting clothes—to virtual marketplaces. While some fashion and apparel companies had tried to solve the art of fitting clothes for e-commerce, these approaches always seemed to fall short. “We believed it was because they were all coming at the problem from one side—fashion or tech, but never both,” Christine says.

Combining Christine’s in-depth knowledge of the fashion industry and their combined knowledge of computer graphics to bridge the two worlds, the pair started BODS, with Christine as CEO and Alex as CTO.

“The more we discussed it, the more confident we became that together we could build something differentiated and transformative—something that would blow the fashion industry’s mind,” says Christine.

BODS developed a unique garment-fitting technology that realistically simulates the fit of garments on an avatar that matches the buyer’s body. The user uploads a few body profile photos or enters body measurements, and using AI, the BODS system creates an avatar that represents the buyer’s body.
The customer can then choose clothing to place on the BOD, change sizes, spin the BOD around 360° to see how the garment fits from every angle, and can even style the look with choices of different accessories, handbags, or shoes.

“The combination of Unreal Engine rendering and streaming technology means we can deliver a photorealistic virtual fitting experience to the user, on any device, in real time,” says Alex. “This was not achievable before unless you were working on a device with a powerful graphics card.”

BODS’ beta client KHAITE (pronounced “kate”) is a women’s ready-to-wear luxury collection that offers a combination of comfort and detail-oriented polish. KHAITE Founder and Creative Director Catherine Holstein sees BODS as more than a technical innovation. “It’s an invitation to play and experiment,” she says. “This technology feels like tomorrow, but the time for it is now.” 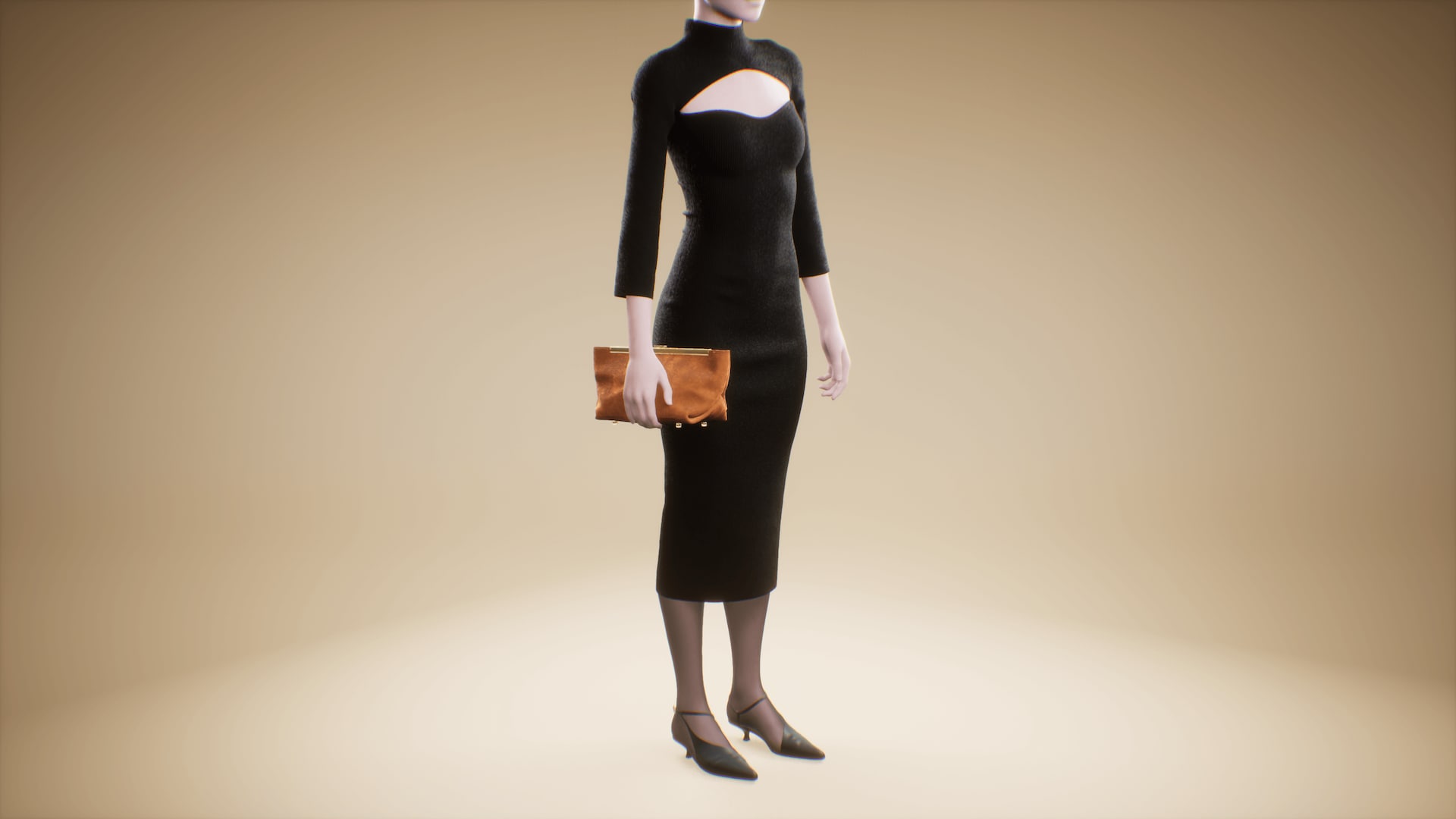 Image courtesy of BODS
KHAITE implemented BODS with the arrival of their Pre-Fall 2021 collection, creating the industry’s first elegant, elevated, and accurate virtual fitting room experience. Khaite has since added additional pieces from the Fall-Winter 2021 collection, with much more to come.

BODS was designed to be easy for the average fashion consumer to use without special technical knowledge. At the same time, the system needed to be true to the fashion brand by accurately representing its quality. 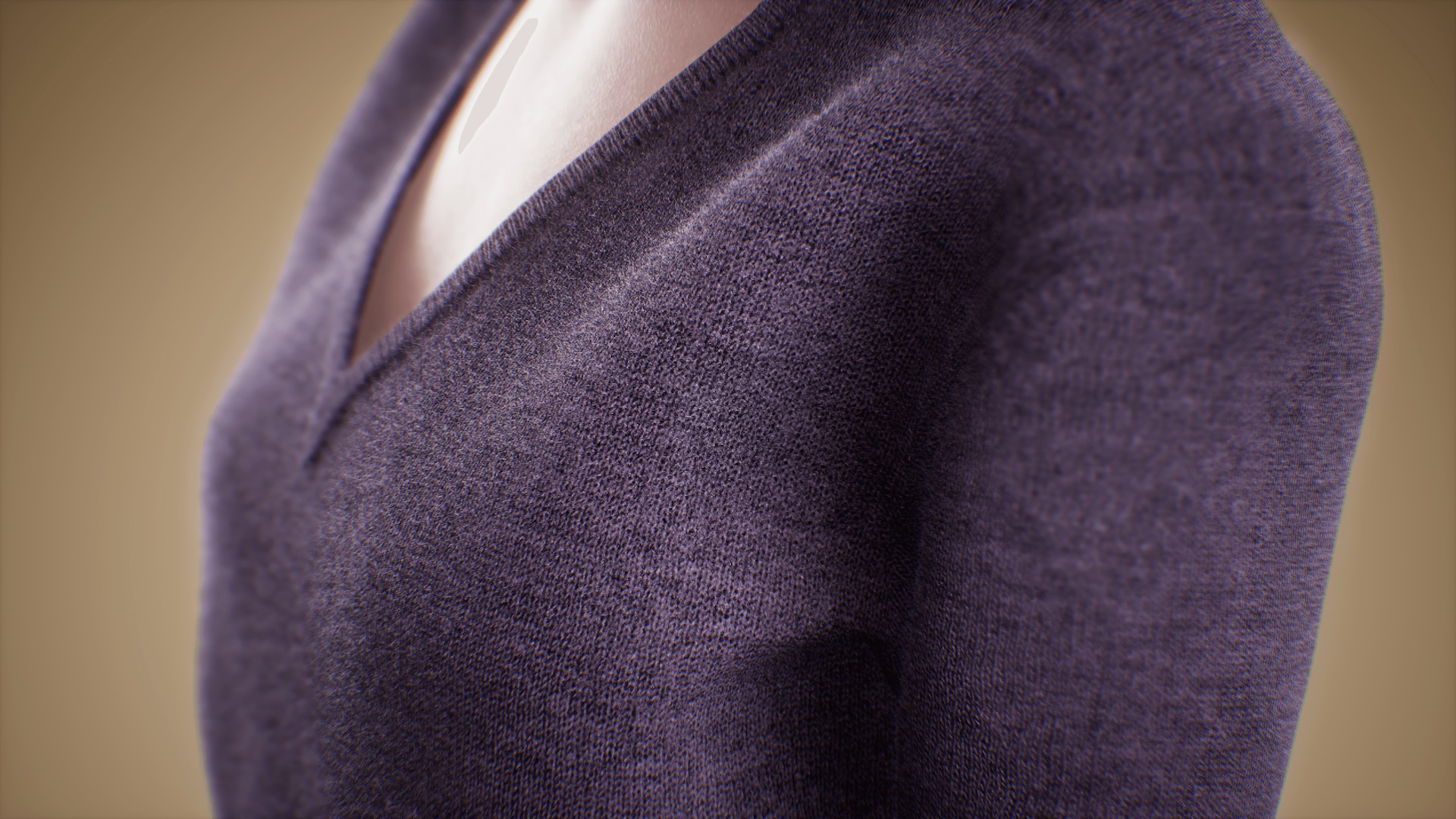 Image courtesy of BODS
“Our goal is to deliver upon those specific wants and needs of the brands without compromising their highly valued aesthetic, tradition, and craftsmanship,” says Christine, “but we never want the customer to feel like they’re out of their depth technically.”

To make this happen, KHAITE’s garments were first rigged in Unreal Engine and implemented on the BODS front end. BODS then provided an API to KHAITE, and the BODS widget and button were added to the product detail pages at the KHAITE website. The rest of the action takes place on the BODS side, and the visuals are delivered in real time via Pixel Streaming as the customer chooses an item or changes the color, switches sizes, rotates, or styles the BOD. 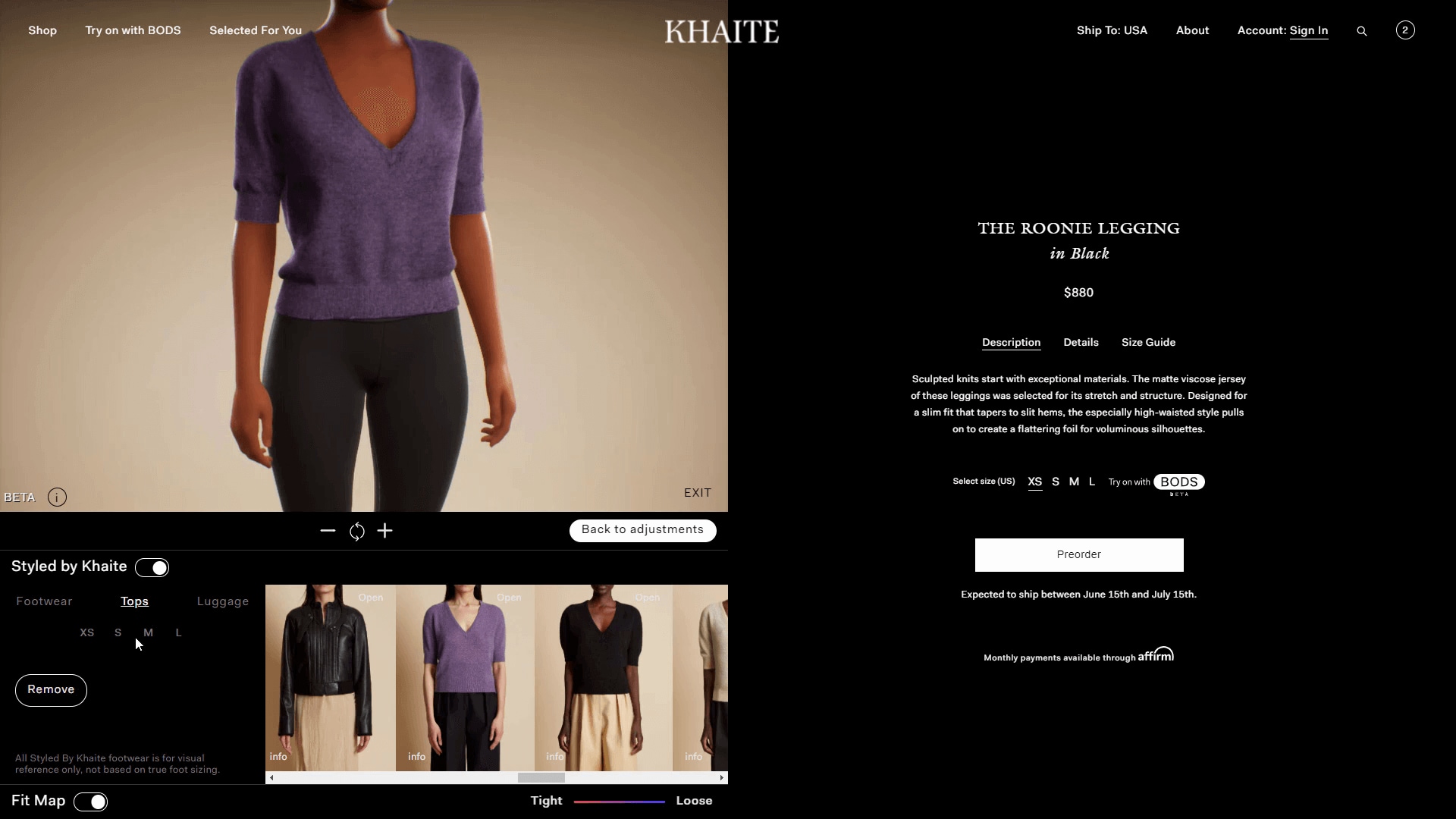 Image courtesy of BODS
“Not everyone who visits KHAITE immediately purchases something,” says Catherine, “but with BODS, they can explore our collections, silhouettes, materials, and color palettes in a new and very personal way.”

“Deep tech, but make it fashion. That’s BODS,” says Christine. “Luxury fashion is a space with sky-high standards where aesthetics, quality, and craftsmanship are everything.” 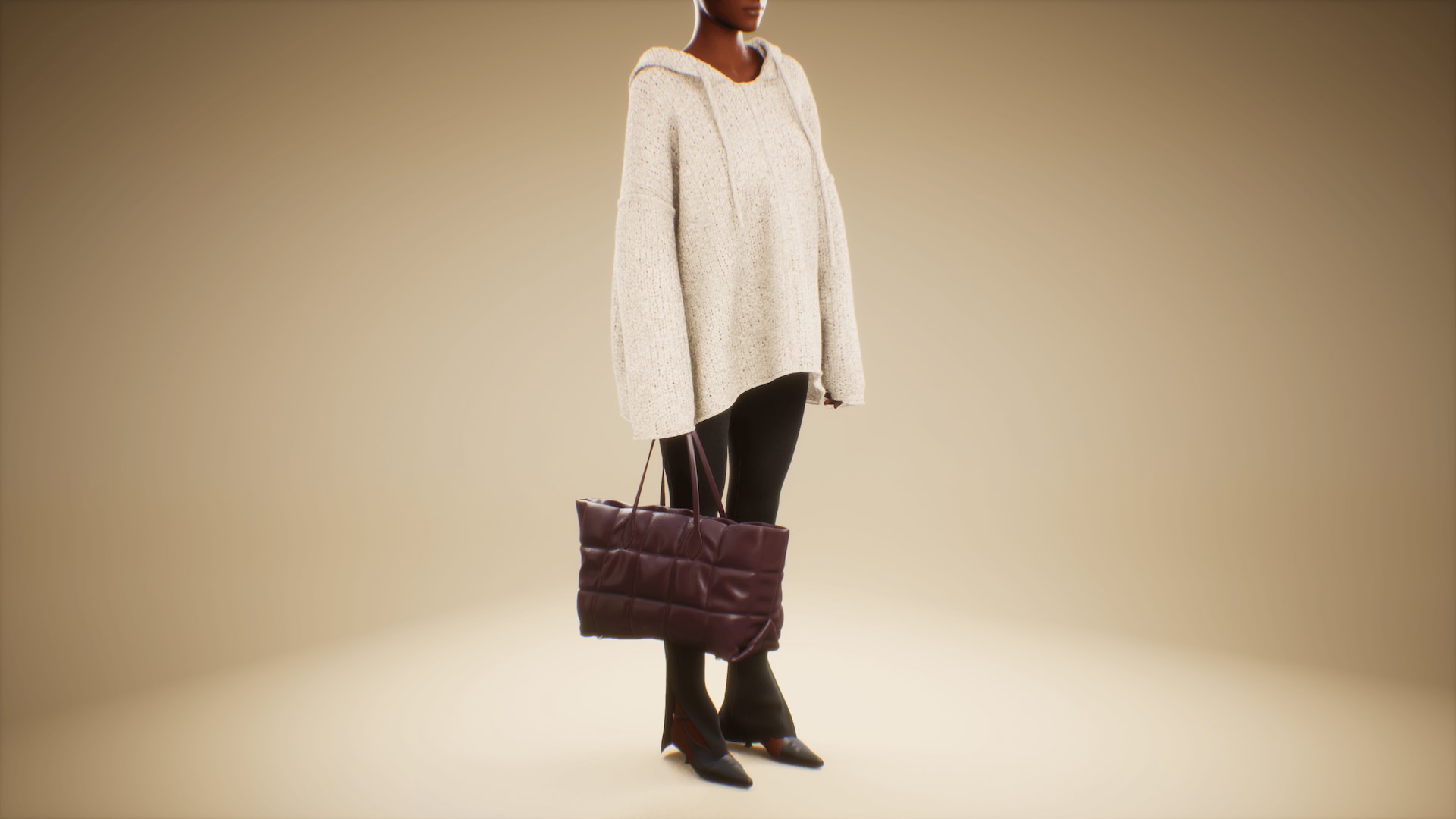 Image courtesy of BODS
The advent of technologies like Pixel Streaming, ray tracing, photoreal render quality, and Unreal Engine’s interoperability with Blueprint-driven APIs have made it possible for BODS to deliver a level of quality that the world’s most discerning fashion brands demand. However, a positive customer experience is just as important.

“A higher degree of alignment between the virtual and the physical worlds creates a more effective and enjoyable experience for users,” says Alex. “We’re proud that BODS is the first regular and recurring use of Unreal Engine within fashion e-commerce.”

Additional factors in the BODS team’s decision to use Unreal Engine include the quality of support offered by Unreal Engine and its large, growing user community. “We are huge believers in the Epic Metaverse,” says Christine. “We very much see BODS as a part of that future, delivering to a wide representation of customers."

She adds that the company plans to continue to evolve the BODS technology, making integration even easier while improving the system’s flexibility, and incorporating multiple body positions and animations.

“We’re bridging two formerly siloed worlds by bringing years of gaming knowledge and real-time rendering advances, built into Unreal Engine, to luxury fashion e-commerce,” Christine says. “What sets us apart is not only true-to-life visualization but also the immersive, integrated nature of the BODS experience—customized to each brand partner—because one size does not fit all.”

Sign up, and we’ll send you all the latest news, articles, and special offers from Unreal Engine and Epic Games.
SIGN UPGET STARTED NOW