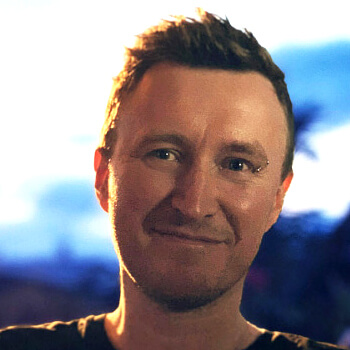 Born in Australia, Andrew moved to Europe in 2005 to pursue his dream of a career in game development. After an initial posting at Splash Damage in London, he moved to Stockholm, taking roles at Grin, Starbreeze, and DICE, specializing in environment art. Today, he’s Art Director at Embark Studios, but still manages to find time for personal projects like Memories of Australia.
Nostalgia. It’s a powerful emotion that can propel us across time and space. We all have something or someone we miss—a place, a person, a period of time. Maybe all of these at once.

When you move to the other side of the world from your home country, this yearning can be particularly strong. Andrew Svanberg Hamilton grew up in a small town just south of Perth, in Western Australia. He now works at Embark Studios in Stockholm, Sweden, a city he’s called home for the last 13 years. According to Google Earth, that’s a distance of some 8,400 miles away, as the crow flies. Everything is different: the landscape, the flora and fauna, and of course, the weather.

As a tribute to the sounds, sights, and feelings of his happy childhood growing up in Australia, and to cherished memories of a loving and supportive family, Andrew has created Memories of Australia, a personal project put together in his spare time, and rendered in real time in Unreal Engine.

On a visit to Australia over the Christmas holiday, Andrew collected content for his short film using traditional photogrammetry techniques. Back in Sweden, he worked on the project over the next few months whenever time or inspiration presented itself, drawing on his experience in game development and especially environment art.

“The project is real-time game art, built with typical game features, limitations, and budgets, so the workflows were particularly familiar to me,” he says.
Image courtesy of Andrew Svanberg Hamilton
Andrew has been creating art of one kind or another since childhood, and had decided to pursue a career as an artist at an early age, supported by his family. But it was an after-school hobby that eventually shaped his future in game development.

“I was very much on a path of traditional arts and print media as a career goal in Australia, drawing and painting during the day, but found myself spending very late nights and weekends playing video games and as a hobby, creating all kinds of digital media.” he says. “I found that what brought me most joy was the creative work behind a computer, a hobby that I couldn’t wait to return home to after studies to jump back into each night.”

In 2005, just as he reached the end of his studies in Fine Arts and Digital Media, Andrew received a job offer from Splash Damage in London, UK. Within two weeks, he was on a plane to the other side of the world, and on his way to a career in game development that would let him combine his passion for art with his joy in creating digital media.

Two years later, Andrew moved to Stockholm, Sweden, which has become a thriving hub for game development. He’s been there ever since, enjoying roles at Grin, at Starbreeze, and for nine years at DICE, rolling up his sleeves to help with whatever was needed: VFX, lighting, UI, level art, and—most of all—environment art.

“Environment art, and in particular recreating nature, has been my biggest passion,” he says. “It involves tackling creation from all angles to create a space that feels alive, a space you just want to dive in and explore.”
Image courtesy of Andrew Svanberg Hamilton
That passion was put to good effect at DICE, where Andrew created all the landscapes for Need for Speed: Hot Pursuit, worked on a number of Battlefield titles, was Lead Environment Artist on Star Wars: Battlefront with the responsibility of building Endor, and was elevated to the role of Art Director for Star Wars: Battlefront II.

During this time, Andrew was working with various proprietary game engines. But in 2018, he joined the recently formed Embark Studios. The team there has chosen Unreal Engine for its current projects; Andrew can barely contain his excitement about them.

“We have magicians working on some incredible things,” he says. “My role is as Art Director on a brand new project helping to shape the vision for a rich new world, which is a massive, but extremely rewarding challenge. I can’t help myself, however, but to get my hands on some content creation where possible—no matter the role, that part of me will always find its way to the surface at any opportunity!”

While Andrew had dabbled with earlier versions of Unreal Engine, he’d never used it professionally until this role. Fortunately, not only was he able to adopt the technology without a problem, the openness of the tools has offered him more creative control than ever before.
Image courtesy of Andrew Svanberg Hamilton
“The transition to Unreal Engine was extremely smooth, with so many features being entirely well-rounded, intuitive, and extensively documented both officially and via the highly passionate community,” he says.

“Areas of the engine that have been closed doors to me creatively elsewhere—such as animation or cinematic control—are now open, and a great addition to the incredible toolset that has helped me reach my vision. I’m able to introduce more storytelling elements than I’ve previously been able to in the past, allowing for more captivating projects.”

These tools, notably Sequencer, Unreal Engine’s built-in multi-track editor, were key to the creation of Memories of Australia. “It’s never been so easy for an artist to tackle all areas of production single-handedly,” says Andrew. “The tools related to creating a cinematic are highly intuitive and open for filmmakers and hobby-artists alike. Importing animation, setting up cameras, adding life with camera shake, layering in VFX, and keyframing the lot, it’s all just drag-and-drop, an incredibly smooth workflow.”

Andrew’s skill in using storytelling tools in Unreal Engine helped him fulfill his goal of capturing emotion in the piece. It’s something that has had a deep effect on viewers.

“I’ve been positively surprised that this little love letter to Australia has struck such an emotional chord with so many, even ones who have never been there.” he says. “I’ve received numerous messages from people in all kinds of professions—and their mothers!—just reaching out to acknowledge an all-too-familiar feeling of emotional nostalgia. I’m so glad that the personal emotion I poured into this actually resonated and shined through.”
One of the reasons that Andrew created Memories of Australia was to learn some areas of Unreal Engine he hadn’t previously explored, such as animation. It’s something that will provide motivation for future personal projects.

“I feel as though I’ve just scratched the surface of the tools and workflows of Unreal Engine, and what it can allow me to realize,” he says. “I’m learning and evaluating its tools all the time, and when the right idea arrives, I’ll be sure to kick off another creative personal project to push my understanding of it.”

Meanwhile, the recent Unreal Engine 5 reveal has him excited to try out the next generation of tools. “I was blown away by the announcement, and the new technologies being introduced”, he says. “I’m always fascinated by the experimentation and development of new ways to create and play—something we hold dear at Embark—and the technology advancements of Nanite and Lumen within Unreal Engine 5 in particular are very exciting. It feels like the next leap in rendering technology, and I can’t wait to get my hands on it.”
Image courtesy of Andrew Svanberg Hamilton
Andrew is also excited about how real-time technology is influencing the convergence of film and games, in terms of technology, workflows, and mindset. “This has seen incredible progress over the last few years,” he says. “We’re at a point where an artist’s skillset is increasingly interchangeable between games and film.

“Games are becoming incredibly advanced in technology—they’re on the brink of being indiscernible from traditional film offline rendering, and on the other side, the film industry is increasingly adoptive of real-time solutions to achieve results on par with more costly and time-consuming approaches. It’s an exciting time to be a part of this creative merging.”

You can find out more about Andrew on LinkedIn, and see more of his work on ArtStation.