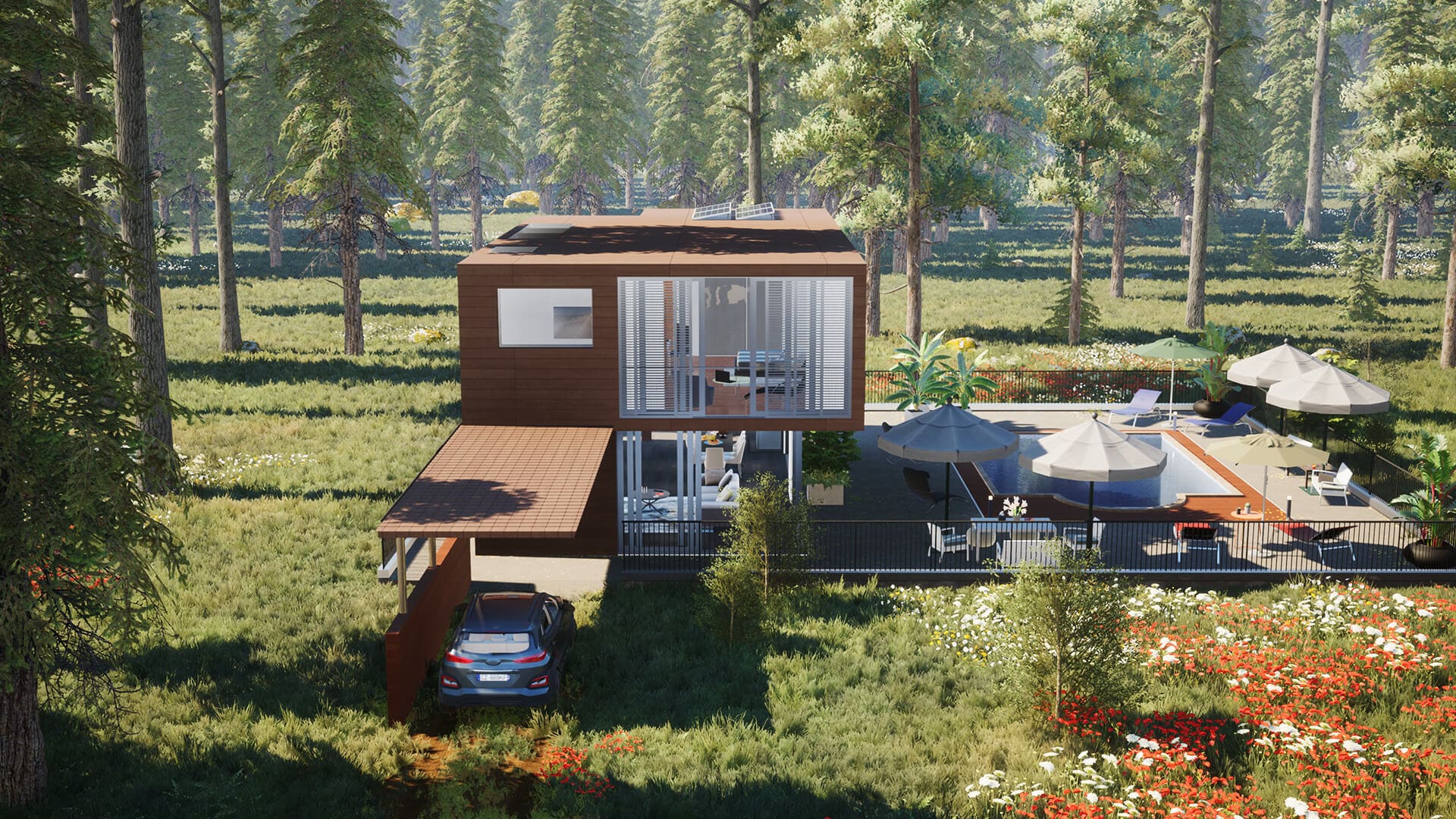 Meet the real-time BIM app for designing and constructing buildings

Ken Pimentel |
March 1, 2021
Architecture
Design
Ray Tracing
Visualization
Zuru Tech
What if you could custom design a house and have it delivered for assembly—the same way you might a kitchen? For one innovative company, this is the vision for how houses will be constructed in the future.

Zuru Tech is the company behind the world's first digital building construction system. An international team based across three continents, it focuses on developing BIM software for architectural design and MOM software for factory scheduling and simulation.

This expertise led the company to develop the Zuru Home app. The premise is simple: order customized buildings that will be manufactured and shipped to your site. 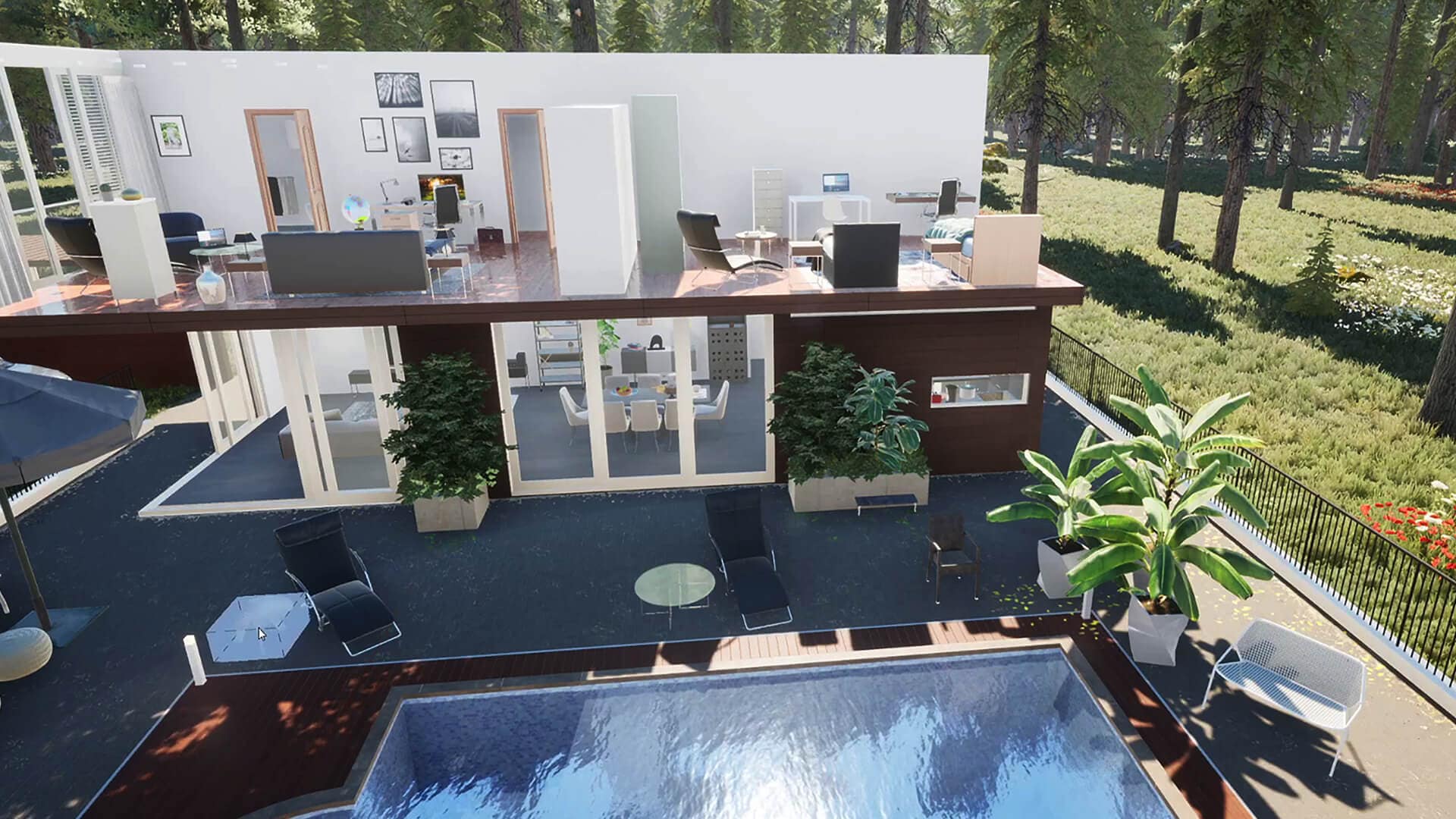 Image courtesy of Zuru Tech
Don’t be fooled by the simplicity of the idea—this is a radically different approach to building. “Zuru Home is about digitizing construction: removing the analog barrier to the building industry,” says Martin Carianni, CTO of Zuru Tech. “Our goal is to create any building you can dream of with our robotized factory and ship it to your site for ultra-fast assembly.”

Carianni believes Zuru Home can change the game when it comes to designing and building houses. “It’s a paradigm shift—digital manufacturing of buildings is something never seen before,” he says. “We plan to change the way we build forever, by leveraging software to create buildings with total design flexibility and then assembling all the parts anywhere in the world by using just a simple crane.”

A new way of designing and constructing buildings

Customers plan out their building using the Zuru Home CAD application, which has been  specially designed to be usable by anyone, whether you’re an architect, engineer—or just a regular person interested in designing your own house. “Our platform aims to bring together land owners with architects, engineers, and home decorators to create a building from scratch, using our multi-user cloud app to design collaboratively,” explains Carianni.

That’s one of the key aspects of Zuru Home—anybody can download the app and start drawing. As they design, users see the cost of their building added up in real time and can purchase whenever they want.

Because it’s not intended to be used solely by architectural visualization professionals, the application had to be designed with ease of use at its core. “We’ve analyzed CAD and BIM software for years and came to the conclusion that these are not simple for the user, and don’t produce the what-you-see-is-what-you-get (WYSIWYG) graphics experience that future homeowners and architects would like when dreaming up their next project,” says Carianni. “With this in mind, we’ve fused together the essence of C++ CAD software development with the beautiful graphics of Unreal Engine.” 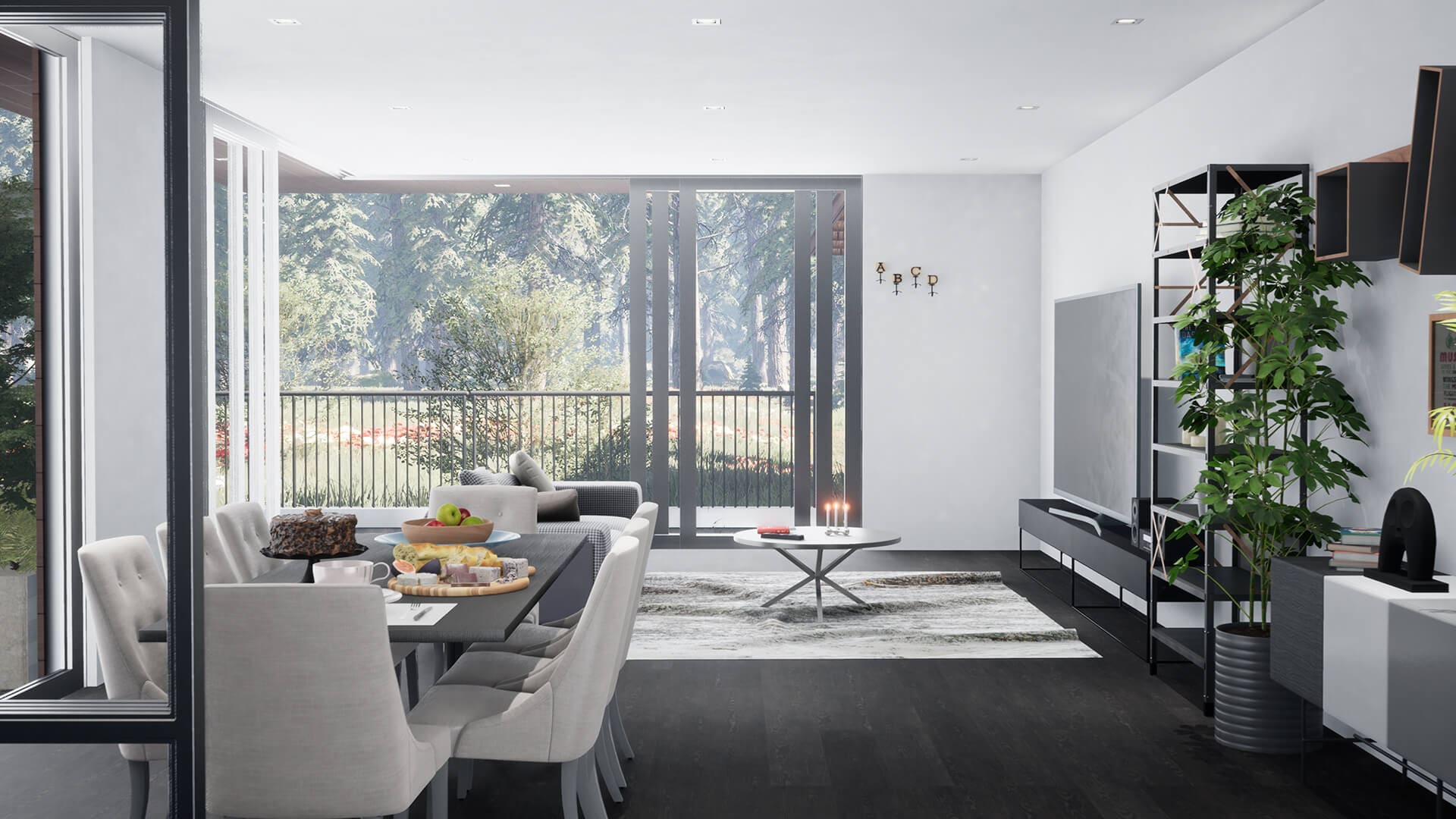 Image courtesy of Zuru Tech
Once the customer has designed their building, it’s sent to a manufacturing facility where the constituent parts used to create the building are made. These can then be shipped to the client for assembly on site.

The factory robots and machines used to manufacture each part are also custom made by Zuru Tech. “We love vertical integration—we craft our own mobile robots and our own fully automated machines to produce our buildings,” explains Carianni. “This approach gives us the flexibility to keep up the speed of innovation so that we keep pushing the boundaries of the first hardware/software system applied to construction.”

As well as providing an easy way to design their new building, the Zuru Home app enables customers to explore the design using the power of real-time rendering. “We sell manufactured buildings that are made to order and tailored for you,” says Carianni. “Customers will order the house from our BIM app, hence our final goal for graphics is full simulation of light on complete procedural runtime-generated content.” 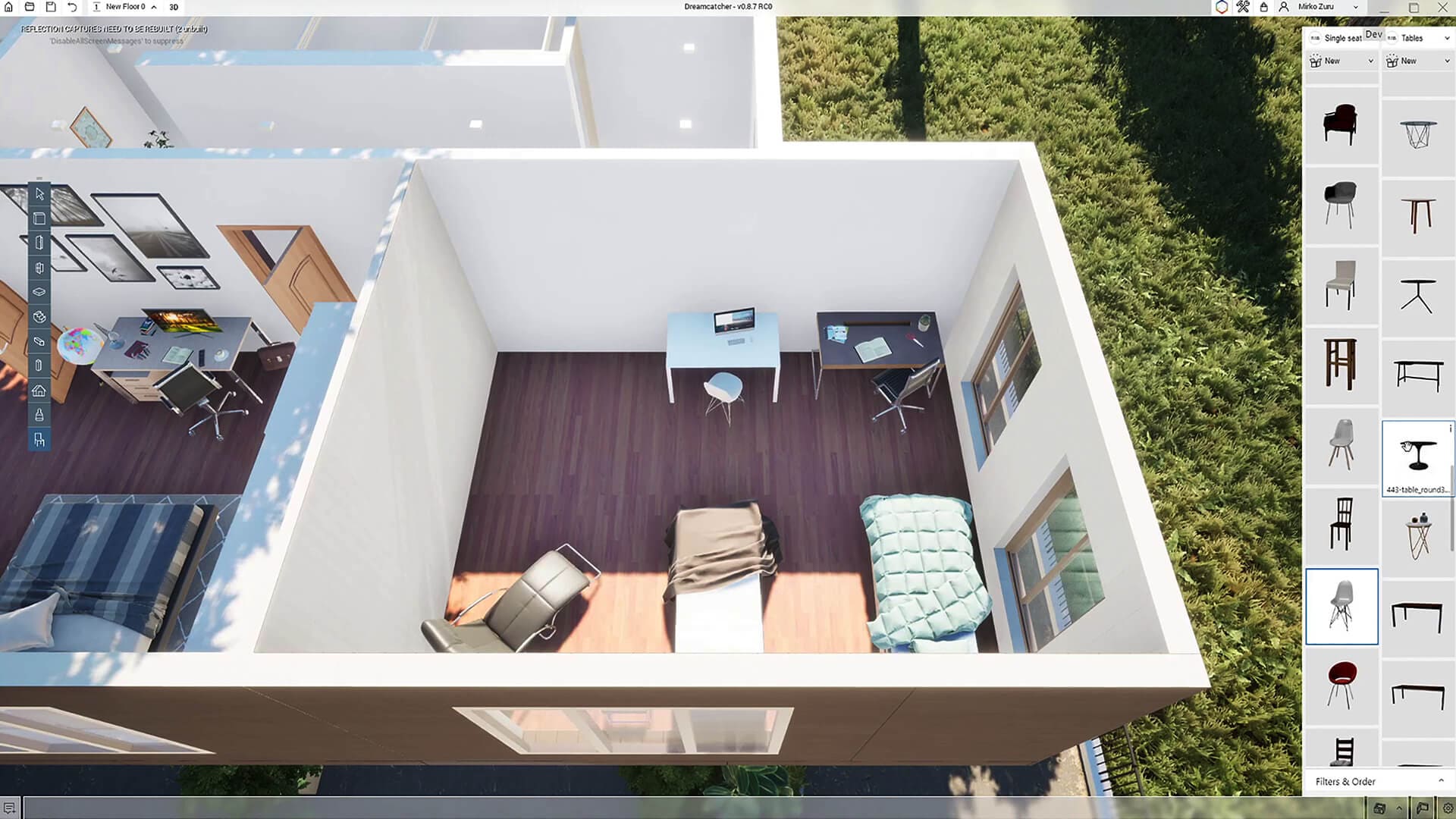 Image courtesy of Zuru Tech
The app uses ray tracing and other techniques in Unreal Engine to create a high-quality architecture, light, and material simulation for customers. Zuru Tech created the backend and frontend using C++ in Unreal Engine, leveraging some key components of the platform including its high-performance physics and destruction system; the Slate user interface framework; and the Unreal Motion Graphics (UMG) UI Designer.

Data generated by the app is sent to Zuru’s factories to produce the actual building components and finally to assemble the house. The company has plans to use Unreal Engine in the assembly phase and also to create a home automation app for smart houses.

Carianni says that the ability to design and render in a WYSIWYG flow that all happens in real time is key to good design and good execution of that design. “We believe in zero interruption, in simplicity and immediacy,” he explains. “Real-time is the only option for creating a modern 3D application today—we accept nothing but the best for our project.”

Partnering with Epic for success

Zuru has been part of the Unreal Enterprise program since 2017, giving them a direct relationship with the AEC team at Epic Games—and access to the Unreal Developer Network (UDN), which enables Zuru’s developers to have their questions answered by Epic staff. “We immediately felt the high level of professionalism and the incredible experience the team has to handle the most diverse uses of Unreal Engine in the AEC sector,” says Carianni.

“As we work on very specific areas of Unreal Engine—procedural geometry generation, archviz rendering, and CAD I/O—the Epic AEC team quickly introduced us to great sessions about those topics and helped us understand how to evolve our product in the right direction.”

The Zuru team has a bi-monthly catchup with the AEC team where its developers align on the future of the engine, enabling Zuru to adjust its development roadmap. “This is really appreciated among our team,” says Carianni. “We often need to understand a design aspect of the engine or know in advance which technologies are going to be developed, so our relationship with Epic is super-appreciated by our developers and artists.”

Carianni is quick to point out that the very first relationship Zuru has with Epic is via the engine code itself. His team finds it particularly useful to have UDN access for direct access to Epic engineers. “We really appreciate the quality, architecture, and power of the code of Unreal Engine,” he says. “Considering the engine code is so precious, everything that gets us closer to understanding it better is gold for us—hence having direct support from the Epic AEC team and Engineering team via UDN is really important for our success.” 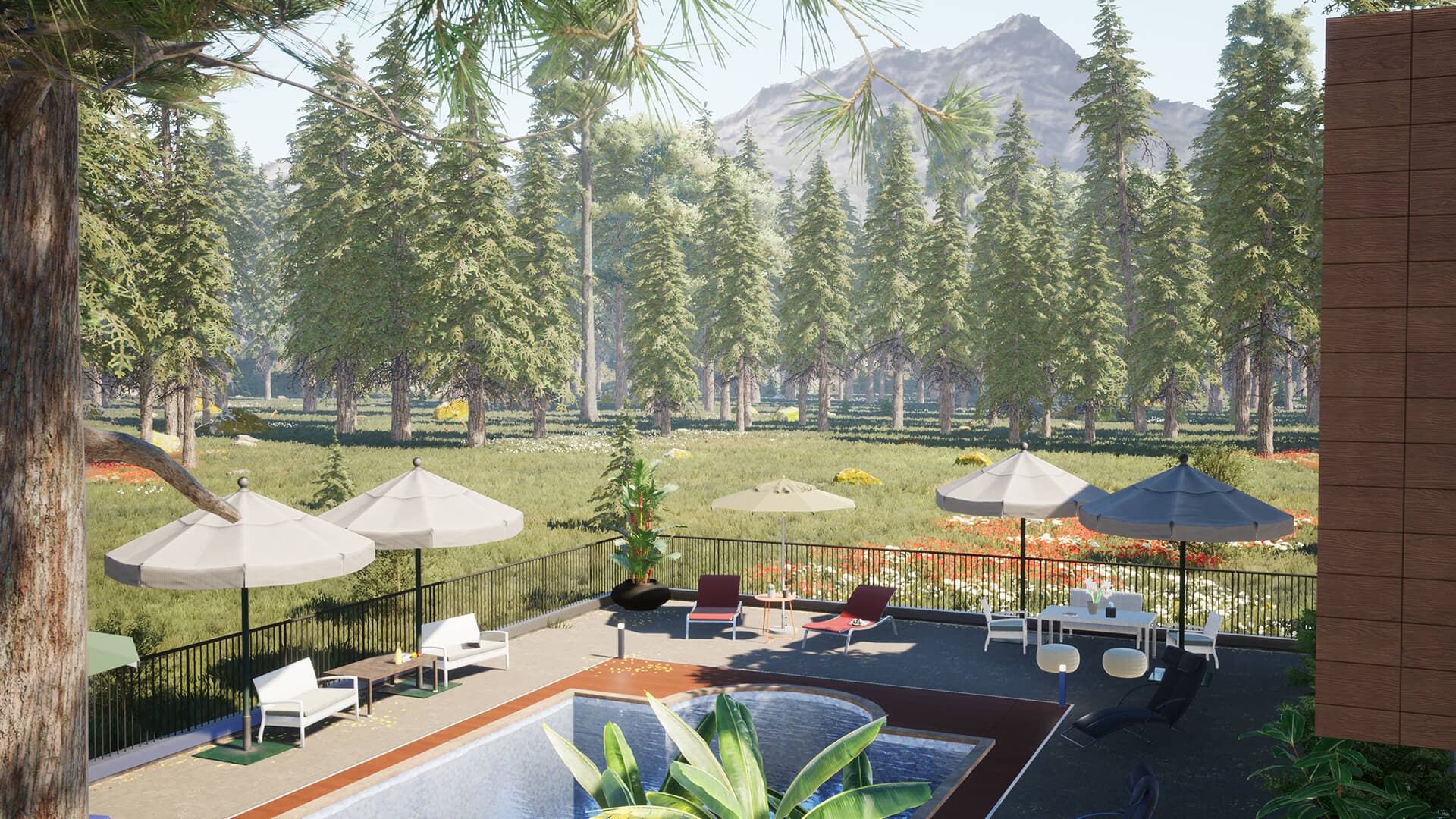 Image courtesy of Zuru Tech
“We believe that today we finally have the robotics, software, and AI capabilities to create the first full-digital, fully vertically integrated building factory in the world. It’s putting together hardware and software in construction—it’s that simple.”

Get the world’s most open and advanced creation tool.
With every feature and full source code access included, Unreal Engine comes fully loaded out of the box.
Get Started Now