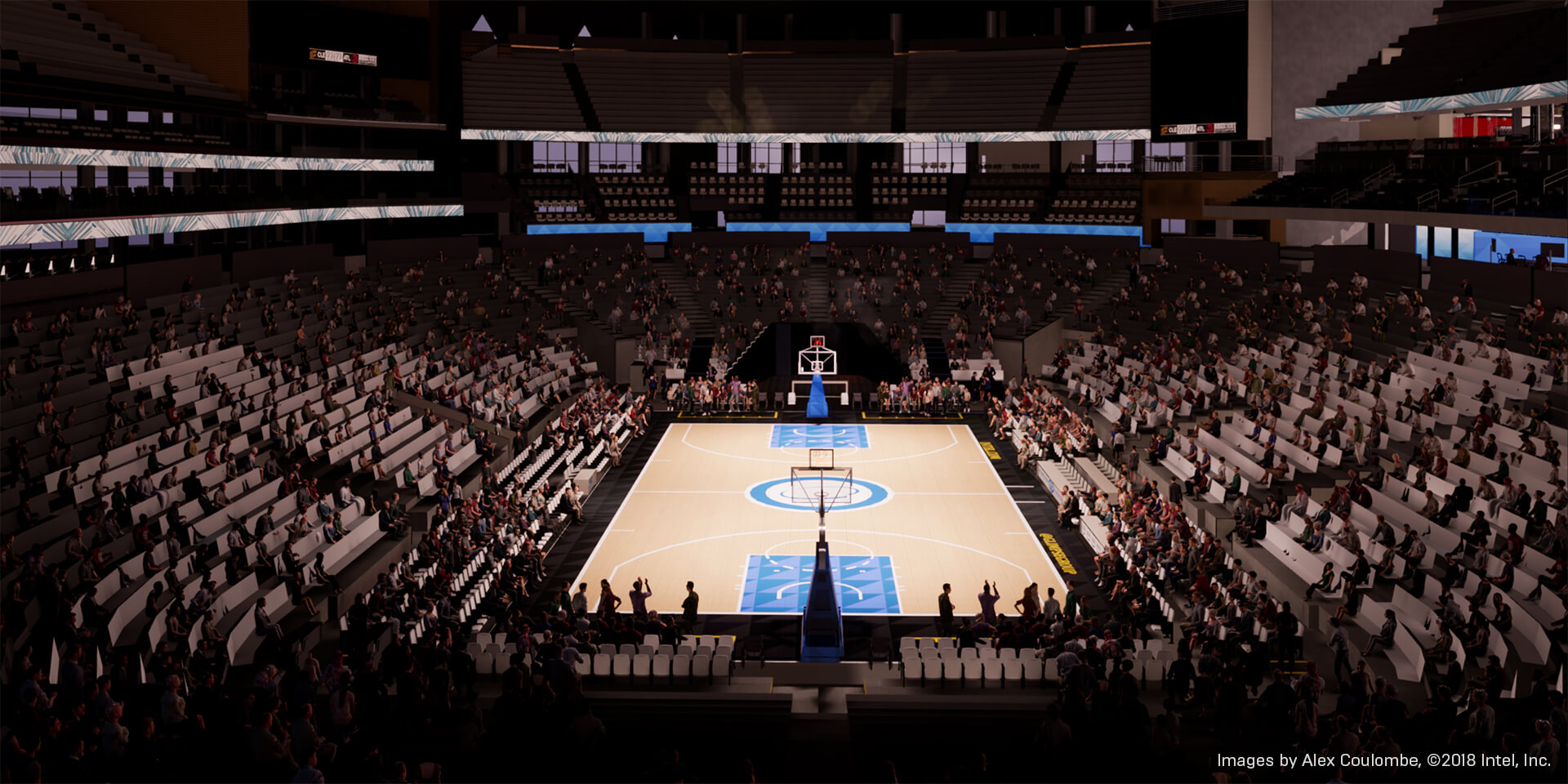 By Ken Pimentel
When Intel® set out to showcase the power of the Intel® Core™ i9 processor for a virtual reality project, they wanted to go big. As in, arena big. Not just with the structure itself, but with its most striking feature - the thousands of enthusiastic fans inside it.

To show how its processors could handle such a computationally-intensive project, Intel created Project Arena, a large virtual facility complete with a playing area, arena seating, lobby, and food court. The experience also includes thousands of virtual 3D fans who not only walk, sit, and move around like a real crowd, but also stand up and cheer at the click of a button.

Inside the virtual reality experience

In the VR experience, visitors can use a virtual dashboard to jump to different spots in the arena, change the colors of fans’ jerseys, make basketballs appear on the court, and even produce fireworks over the playing field.

But perhaps the best part is the interaction with virtual fans, where you can mill around in a crowd of moving people in real time. The experience includes more than 2500 animated characters engaged in normal arena activities—getting in and out of seats, chatting with friends in the food court, waving, and generally acting like people do at a large venue. The unique motions for each character, coupled with crowd sound effects in each area, make for a truly immersive experience.

Using a VR display, you can sit next to a virtual person in the stands, get close to the players milling around the sidelines, or position yourself center court and command a standing ovation, complete with a roaring cheer from the entire crowd. 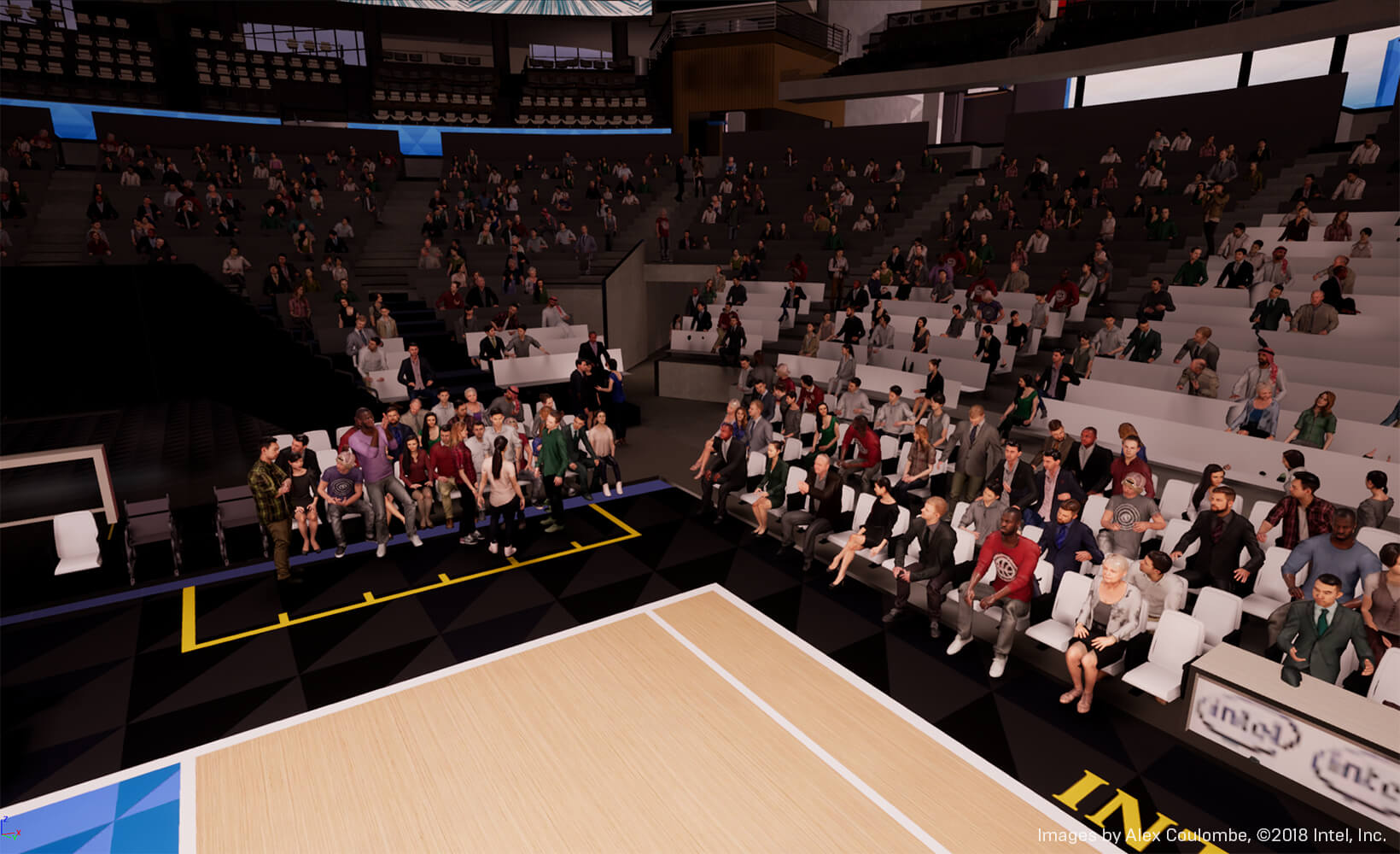 Crowd seated in the VR arena.

To make the arena experience, Intel brought together several companies. Design firm HOK provided a 3ds Max model of the arena, and Agile Lens brought it into Unreal Engine using Datasmith. Supersymmetric managed the crowd simulation with characters and motions from AXYZ design, and Octopus Games provided custom programming. Glimpse Consulting managed the project, fitting together all the pieces these companies contributed.

To convert a scene of this scale to Unreal Engine, Datasmith proved to be key to the process. “Converting 3ds Max to Unreal Engine used to be a cumbersome process,” says Alex Coulombe, Creative Director at Agile Lens. “The new workflow using Datasmith is a breath of fresh air.” 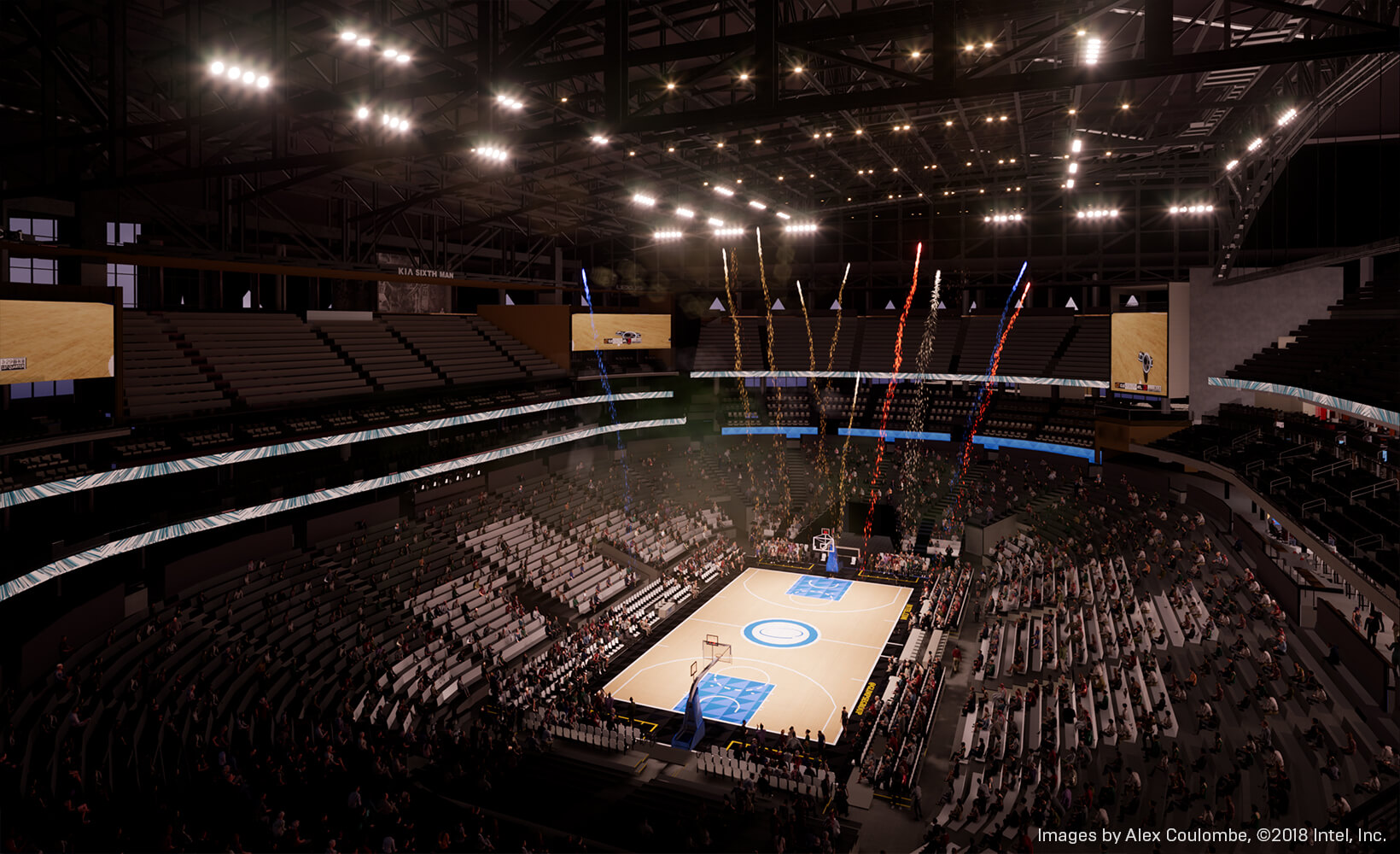 The arena is built to scale with attention to architectural detail.

The arena itself has 6.5 million polygons, with much of the scene originally created in Autodesk Revit then imported to Autodesk 3ds Max. For scene cleanup in 3ds Max prior to export, Agile Lens optimized by combining objects. “There was a ton of small geometry in the scene that it didn't make sense to instance, for example every chair leg on every bar stool,” says Coulombe. “I combined them to form larger meshes, then instanced these meshes in Unreal Engine.”

Agile Lens also greatly reduced a large number of near-identical materials by creating a master material in Unreal Engine and instancing it with different textures and parameters. The characters in the scene added another two million polygons. To optimize the geometry for the 2500 animated people in the scene, Agile Lens generated LOD meshes with InstaLOD. 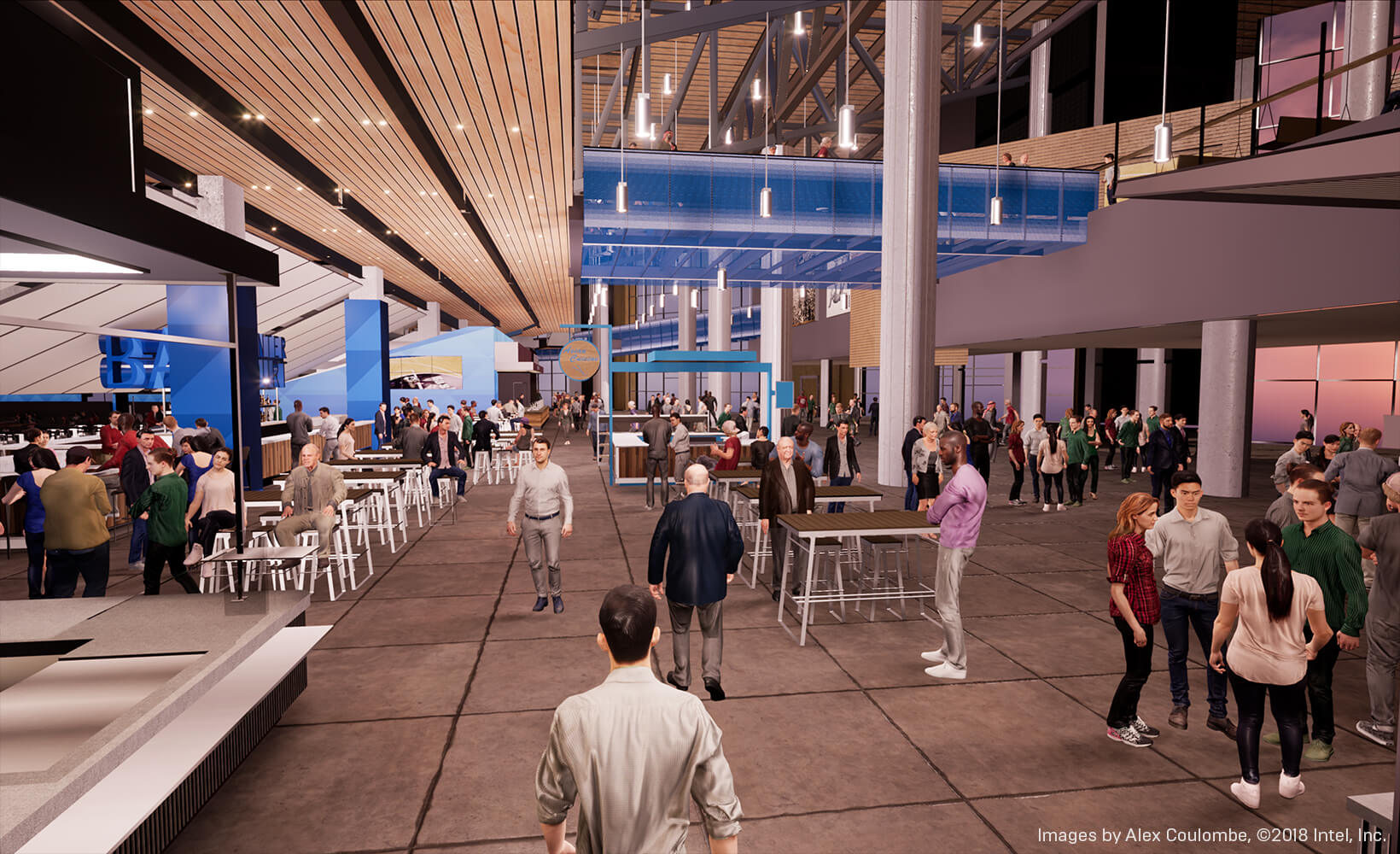 These optimizations ultimately paid off in the final VR experience. “We were able to get 40 to 90fps, depending on the hardware used,” says Rod Recker, General Manager at Glimpse.

The team used Unreal Editor to pull together animation, building data, user interface elements, and testing interactions. They also used it to build the dataset and the final executable of the VR experience.

Coulombe credits his hardware setup as being integral to the efficient processing of such a large dataset. "When using the i9 with the Optane SSD drive, we saw a remarkable productivity increase in our Unreal Engine workflow,” he says. “Loading scenes and importing Datasmith files was lightning fast. Lightmass generated in a fraction of the time as it did with even the most powerful i7."

The VR dashboard also includes the option to perform a render of any view as a 360-degree panorama with Chaos Group V-Ray. “It was icing on the cake to discover the speed at which we could generate V-Ray 360 renders directly from within the VR experience,” says Coulombe. 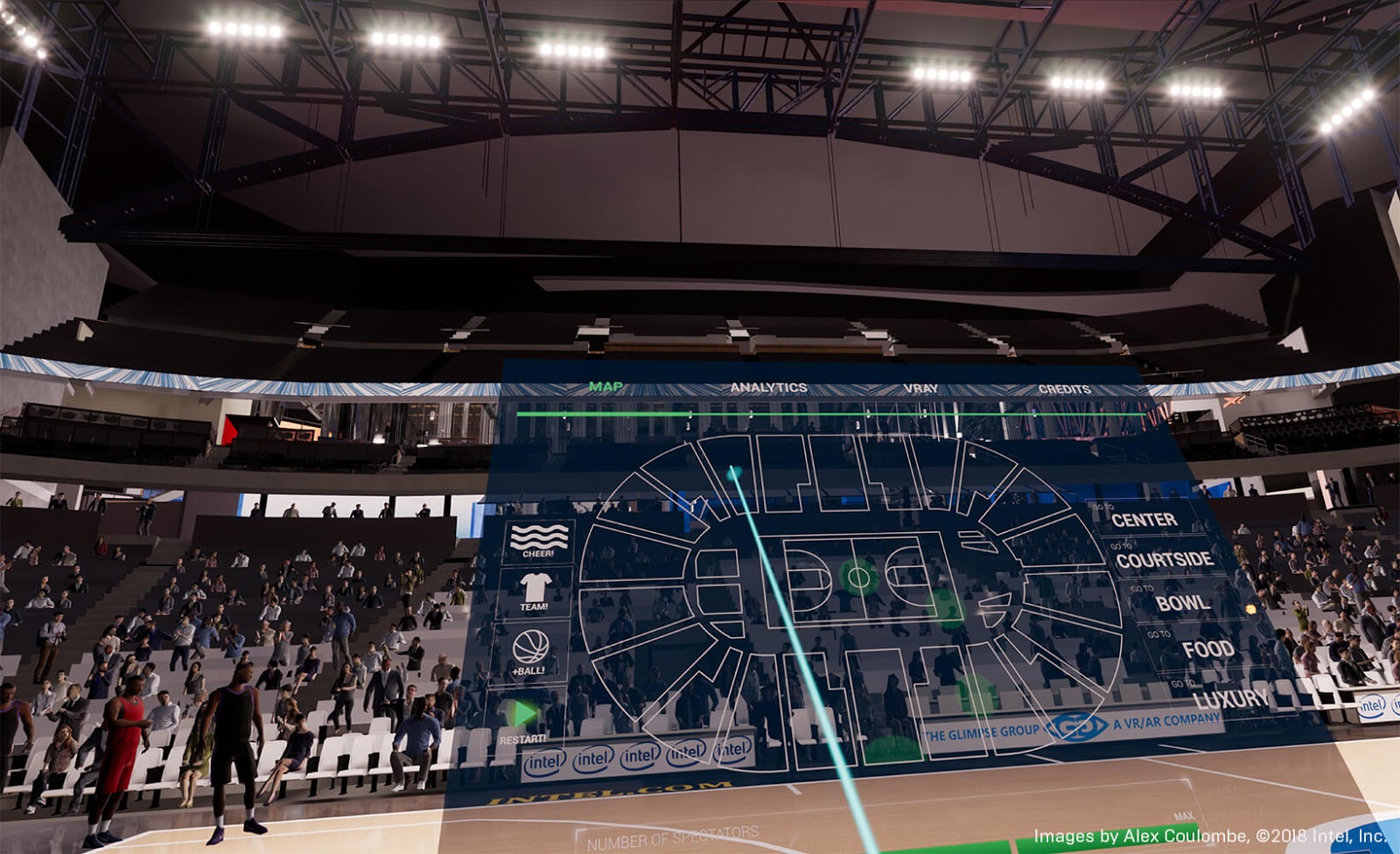 The VR dashboard controls the experience, including the ability to jump to different areas of the arena.

Coulombe also names Datasmith as a great time-saver on the project. “On the projects I’ve used Datasmith with so far, I’ve seen at least a 500% increase in productivity,” he says. “It’s by far the most robust and frictionless workflow for architectural visualization on the market today. The i9 with Optane, coupled with Unreal Engine, turned out to be an even more powerful combination than we anticipated.”

Coulombe, who has a theater background, appreciates that Datasmith leaves more room for creativity. “With the time I save with Datasmith, I’m able to spend more time focusing on the experience,” Coulombe says. “Once all the materials, lights, geometry and cameras are in Unreal Engine and looking good, I can spend more time experimenting with subtler elements and focusing on making the experience the best it can be.”