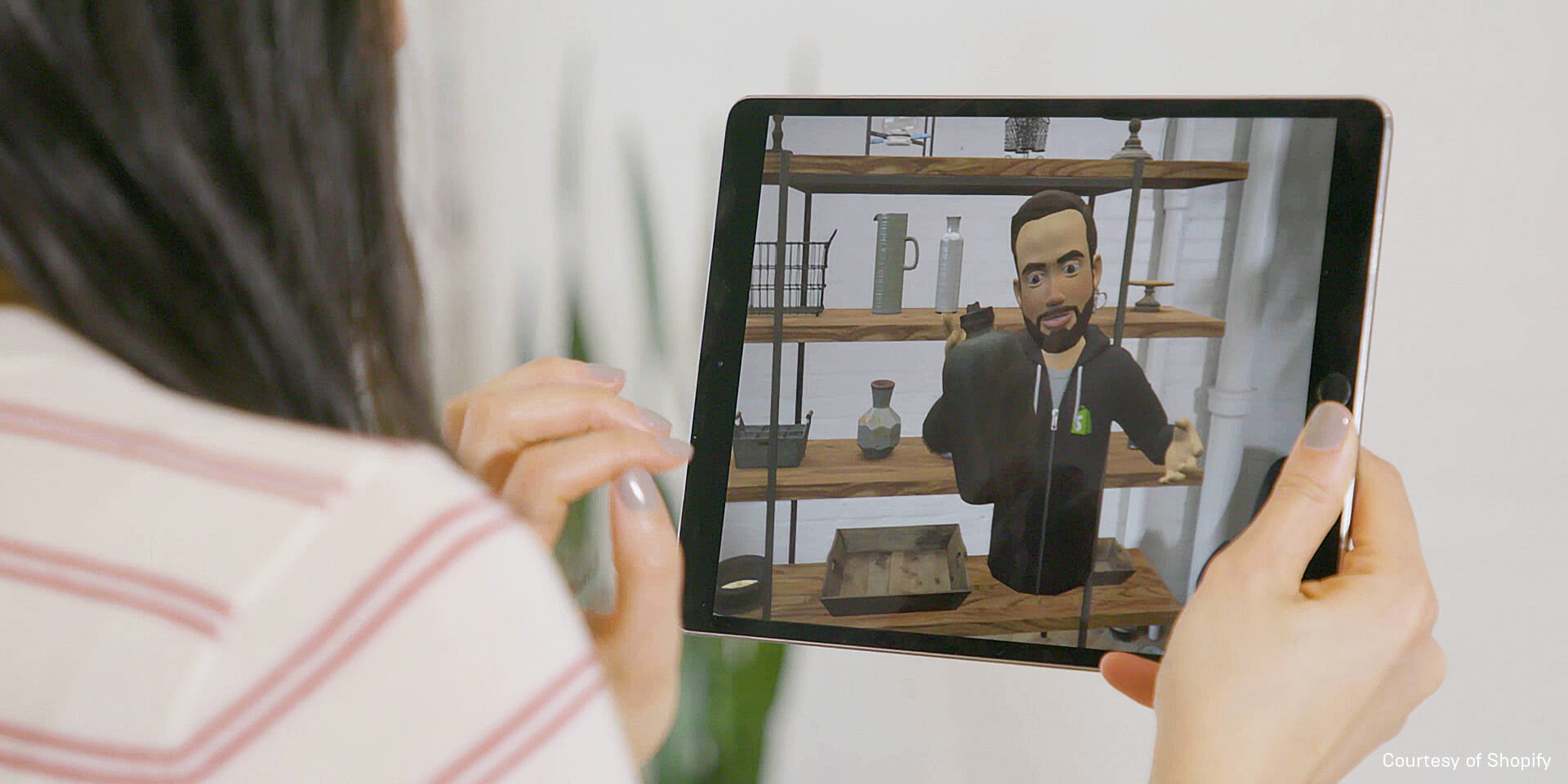 By Ken Pimentel
Shopping has never quite been the same since the advent of the Internet ushered in a whole new realm of opportunity for online commerce. Rather than completely replace the status quo, however, the emerging technologies of today have great potential to let businesses make revolutionary steps forward in designing a more convenient, engaging, and immersive shopping experience tailored to the individual tastes of their customers.

At Shopify, a popular Canadian-based ecommerce platform that embraces our changing tech-driven world, the creative team is working to carve out a bold vision for the future of consumer shopping online—filtered through the lens of VR and AR. At present, much of the public consumer focus on VR revolves around video games, design, and education, though commerce is a huge area that could soon benefit from the innovation boom around VR and AR in the tech sector.

“We strongly believe that virtual reality and augmented reality will fundamentally shift how we shop in the future,” says Daniel Beauchamp, AR/VR lead at Shopify. Using Unreal Engine to design and power VR and AR tools and applications, Shopify has been experimenting with intriguing ways to enhance how people shop online to broaden the consumer experience.

“Shopify chose to go with Unreal Engine because of the fact that it's so easy to get up and started with,” he says. “The editor is easy enough to use for our artists, it's great for our developers, and it allows us to build these prototypes really quickly.”

By its very nature, shopping online is often a very static experience. Between words, images, user reviews, and occasional video content, consumers are only able to making buying decisions based on what’s being presented to them. This doesn’t quite convey the same information you get from being able to examine and interact with items in person. The magic of bringing shopping into a virtual real-time experience is that it has the potential to truly bridge that gap in fascinating ways.

Incorporating VR into the process lets you interact with and look at objects at the proper scale and in the context where they’d actually be used, explains Jonathan Wade, AR/VR developer at Shopify. Thread Studio is a perfect example of the many ways this can be implemented. One of the first experiments the team crafted using Unreal Engine in VR, Thread Studio is a tool for visualizing what a t-shirt would look like. In a full VR headset, it allowed users to intuitively select and move graphics around on a virtual t-shirt mannequin and experience the visual flow of what that would look like as if it were real. 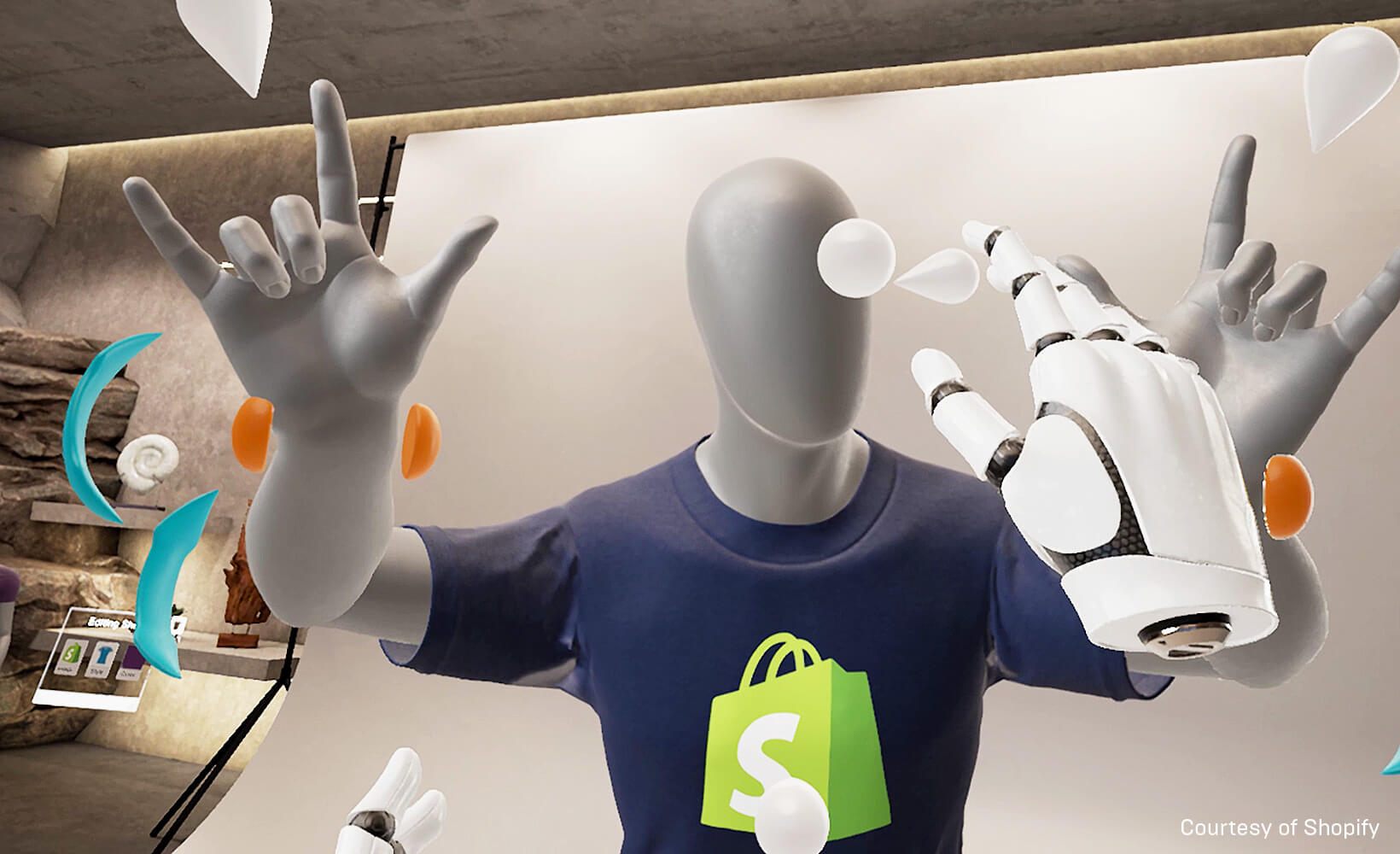 Thread Studio, made with Unreal Engine, provides a fun interactive way to experience customizable t-shirt designs on a posable mannequin in VR.

“One of the things we found that people had a lot of fun interacting with were the mannequins...posing them in silly positions, putting googly eyes on them, etc., and that became a real feature of the app,” says Wade.

With Thread Studio helping to open up the fun, creative, and practical possibilities of what VR could bring to the shopping experience, it wasn’t long before the team expanded to a more ambitious project with Unreal Engine.

Merging VR and AR elements together was something the Shopify team stumbled across while exploring other ideas, but once it came together it became a real game-changer for them, says Samantha Cribbie, 3D artist at Shopify. Following Thread Studio, the team realized it needed a tool to iterate faster in a more collaborative way, so it built a collaborative brainstorming tool called Expo that allowed multiple team members to meet in a VR space using avatars and try out interactions together.

“The thing that was making all of this possible was Unreal Engine's fantastic network capability,” says Beauchamp. “Whether some people are in VR, on iPads using AR, or are just on their laptops, it's all just running seamlessly. Honestly, we would have been terrified if we had to write network code from scratch.” 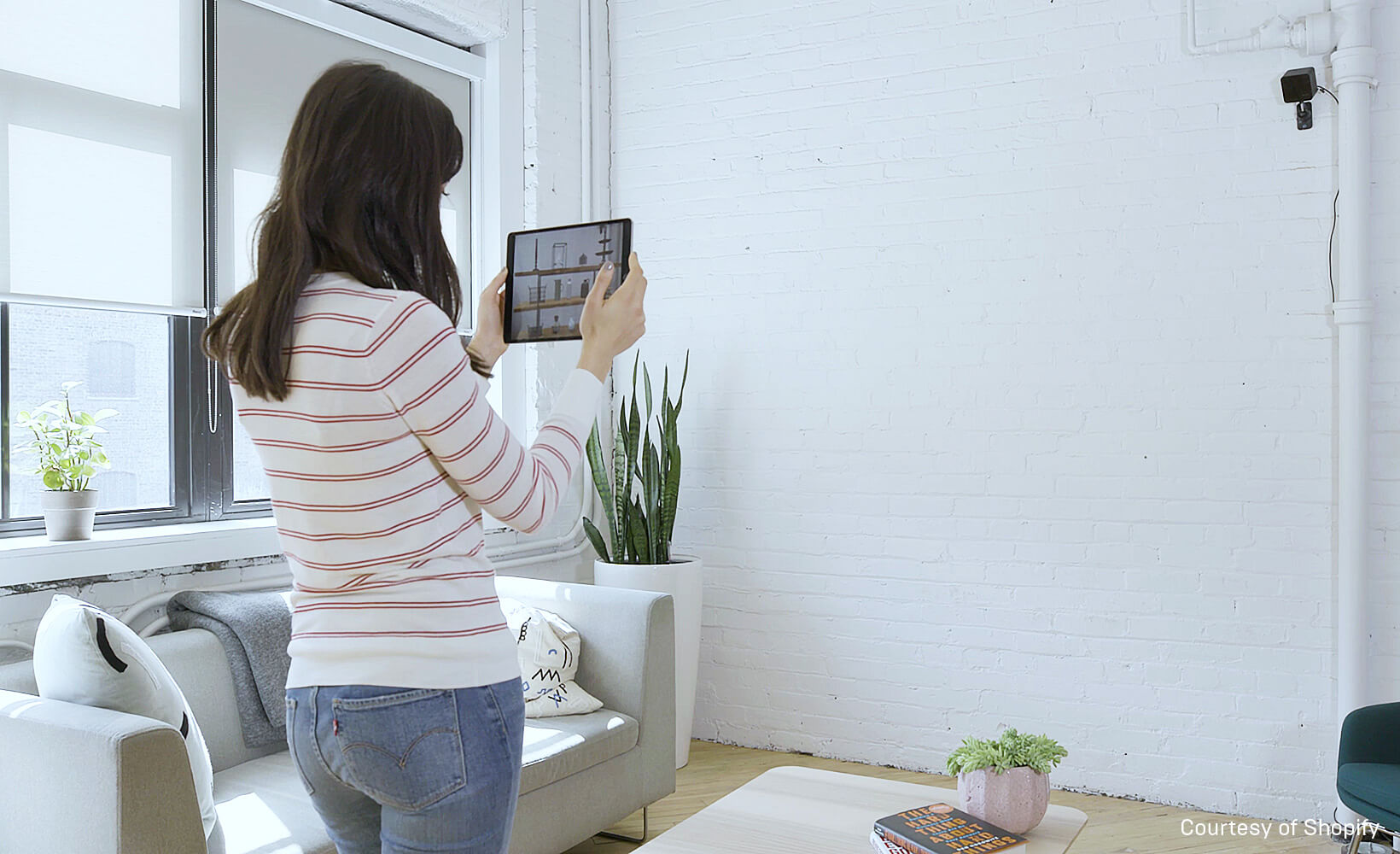 Mixed reality with Expo lets shoppers use AR to experience what their apartment might look like with superimposed items—and with optional help from a real-time virtual designers in VR.

This opened the door to more creative uses of Expo. Using AR on an iPad, you could preview what photorealistic virtual furniture options would look like superimposed over your physical space. Taking that a step further, it even would allow a trained designer from anywhere in the world to virtual transport into your AR experience on request and help you pick the right items based on your living space, offering a very personal shopping experience delivered from your living room. This is only the beginning of what’s possible, and Shopify is eager to keep developing bold ideas to enhance the way consumers shop.

“A lot of people thought that Shopify got into VR too early for this type of company,” says Wade. “We think it's actually going to creep up on people. New devices are going to come out and things are going to change really quickly, and Unreal has been great about keeping up with all the innovations that are happening in the VR and AR space.”

Want to learn more about how Shopify uses Unreal Engine for VR and AR experience design? Watch the full video above to get the scoop!