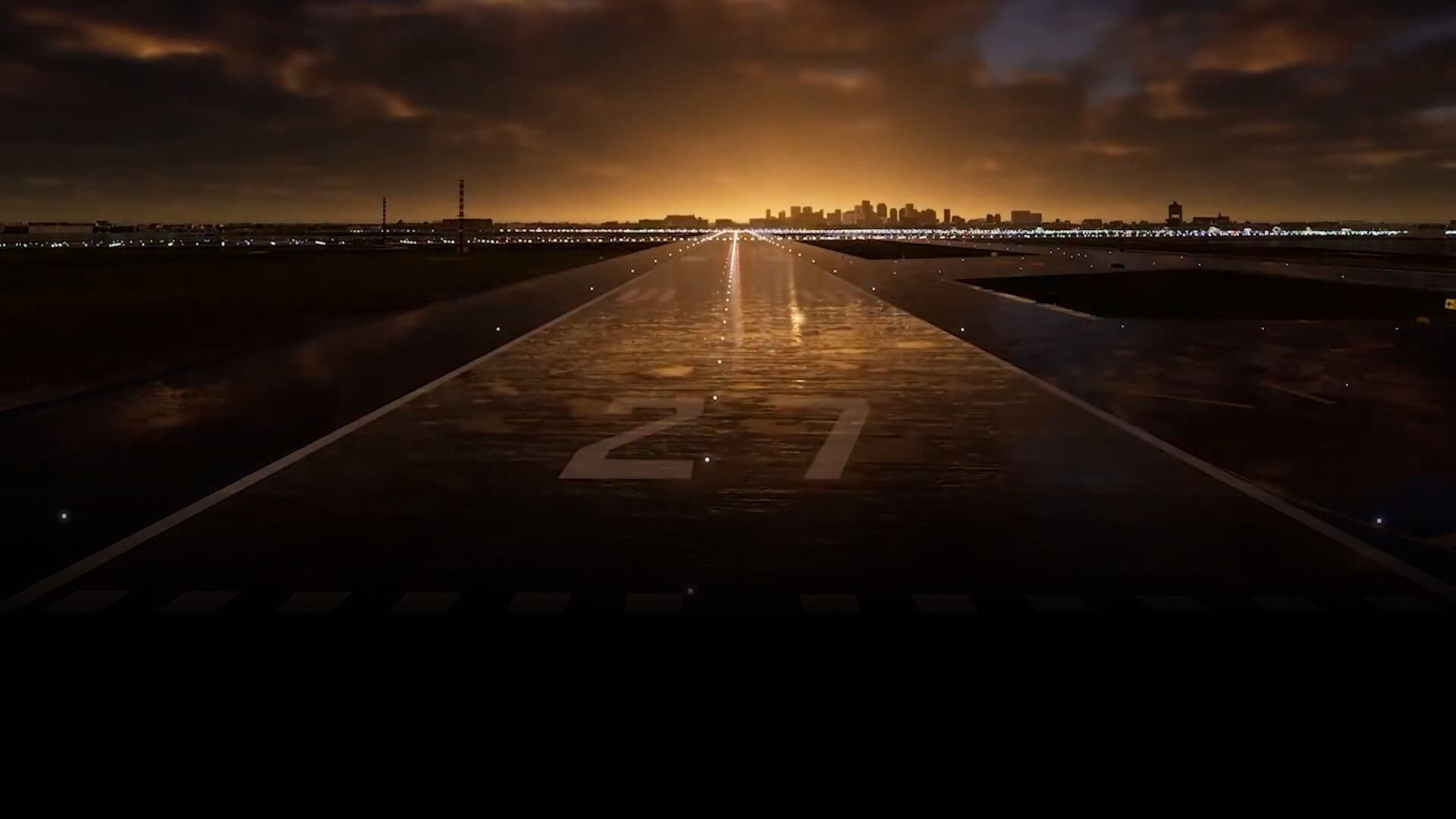 November 23, 2022
AI
CAE
Defense
Simulation
VR
For its 75th anniversary, aviation training giant CAE has a lot to celebrate. With contracts around the globe and an annual revenue of over $3 billion, CAE is enjoying a banner year as a provider of cutting-edge training solutions for civil aviation, defense/security, and healthcare.

CAE’s roots lie in the aviation radio industry, but it rapidly entered the flight simulator business. Decades later, the company added a training network to its portfolio. Today, more than 60% of CAE’s revenue comes from delivering training services.

“From that moment, there’s been a constant quest towards improving the fidelity and immersiveness of the training device,” says Marc St-Hilaire, Vice President, Technology and Innovation at CAE. “The higher the immersiveness, the better experience for the pilot, and the more they believe they’re actually flying an aircraft.”

CAE has continued to refine its approach to building flight simulators, aiming not only for higher fidelity, but for a much-shortened development period. “We made that pivot by leveraging the global supply chain—cost elements of commercial off-the-shelf electronics, computers, motion systems and projectors,” says St-Hilaire.

Part of the focus on ready-made components is CAE’s decision to pivot to the Unreal Engine as the software platform for its next generation of visual solutions. 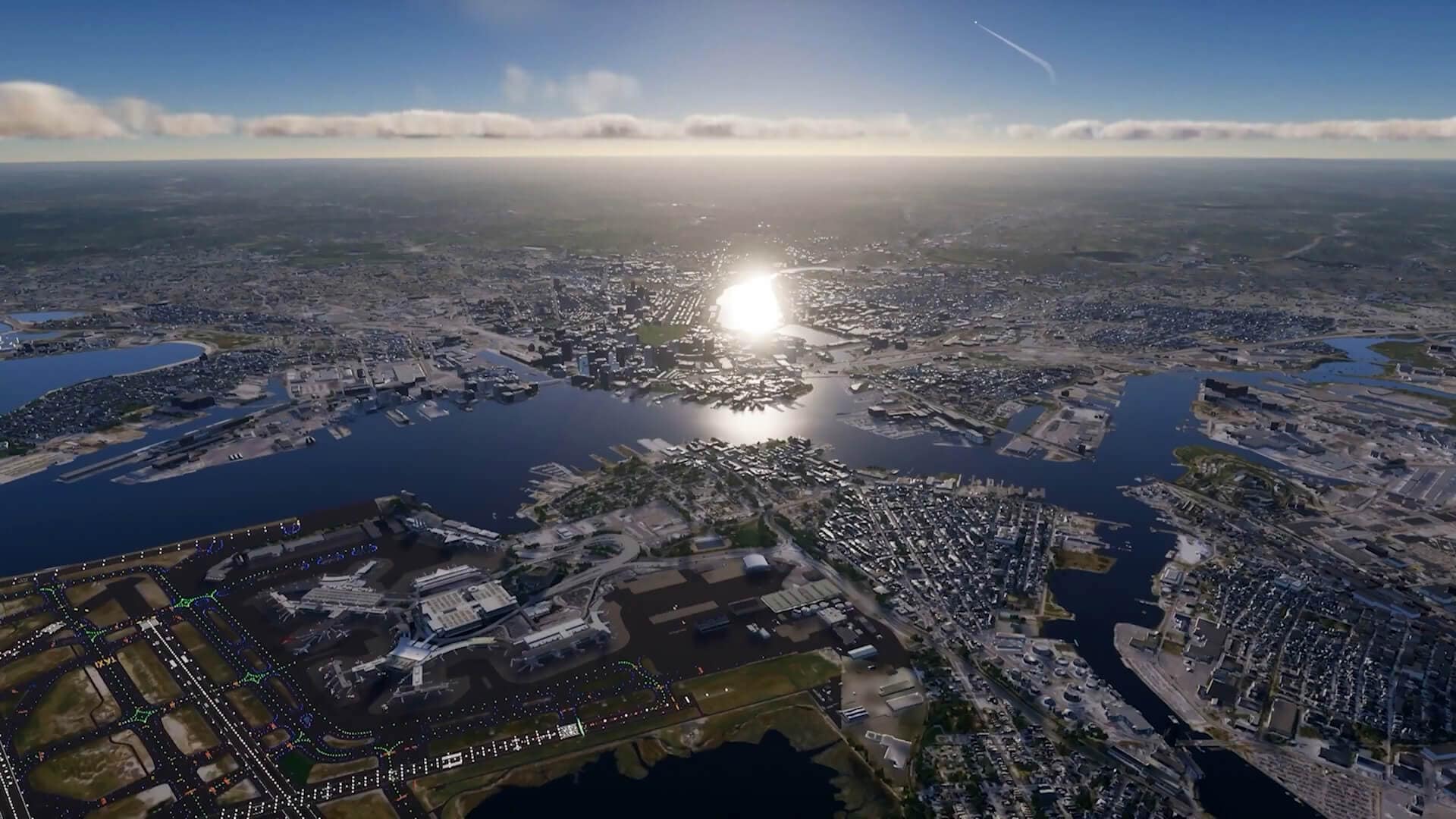 Image courtesy of CAE Inc.
“The technology has progressed a lot in terms of visual systems, and that’s why we’re here today,” says St-Hilaire. He recalls seeing Unreal Engine entering the simulation arena 10 years ago.

“Back then, we were seeing part-task trainers or lower-level task trainers developed with game engines, first-person shooter and tactical training,” he says. “It was very disruptive because you had a turnkey system in a single package—you had the development environment as the tool and the means to distribute your own solution.” He adds that Unreal Engine’s ecosystem of content and community was also disruptive to the simulation industry.

Since then, St-Hilaire notes, game engine technology has advanced, along with GPU power and other elements that comprise a simulation solution, to solve many of the challenges the simulation industry was dealing with in creating a convincing, effective training solution: global coordinates that resolve correctly over long distances, low latency, and of course, graphics quality, just to name a few.

St-Hilaire illustrates the importance of low simulator latency by comparing a flight simulator to a closed control loop, where the trainee applies force to the yoke and experiences a number of sensations. “Pilots sense motion through their bodies. Their eyes are telling them where they are and where they’re going; their inner ears are sensing acceleration and rotation; their sense of touch provides force feedback. That loop is very delicate,” St-Hilaire explains. “Any latency, any delay in that loop, will make something feel incorrect, can impact the pilot’s control of the simulated aircraft, and overall will make the pilot disconnect from the experience.”

Latency is so critical, St-Hilaire says, that industry regulators prescribe an upper limit of 90 milliseconds for all delays and latency, starting from when the pilot moves a control, through the display of visuals, along with any other data transfers and calculations that take place.

“If I’m training on a fighter simulator in a joint scenario, my wingman on the other simulator has to see what I’m seeing,” St-Hilaire says. “If I shoot down something, both of us need to see at the same time that I shot it down.”

This, he says, highlights the importance of network latency—it’s just as critical as the simulator’s own latency in keeping the simulation immersive, realistic, and effective for training.

About 15 years ago, CAE moved its development focus to make use of commercial GPUs and drivers, and has been riding that journey of pilot visual calculations ever since. This, St-Hilaire points out, is another example of technology changes in the process of creating the visuals themselves. 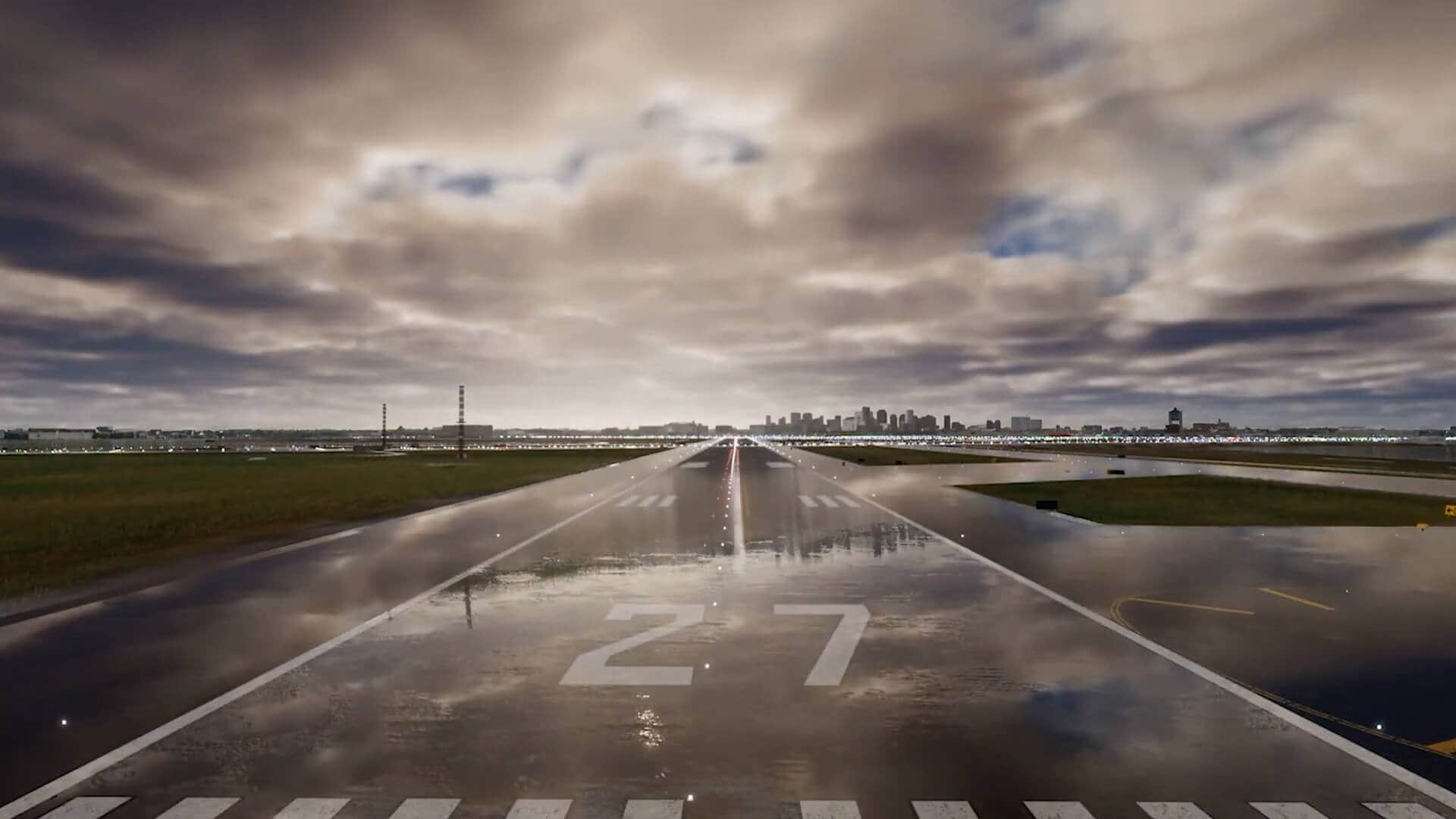 Image courtesy of CAE Inc.
In its early days, the flight simulator image generator team at CAE was on ASICs and FPGAs. “Back then, at the peak of its performance, we were rendering 6,000 polygons per frame,” St-Hilaire muses. “When we pivoted to a commercial GPU, we went from ASIC design and FPGA programming to a software stack based on the OpenGL standard.”

From that moment, he says, the conversation shifted from “how many polygons” to image quality, which was closely associated with the roadmap and the GPU. As GPU performance increased year after year, CAE was able to start focusing more on content than on optimization. 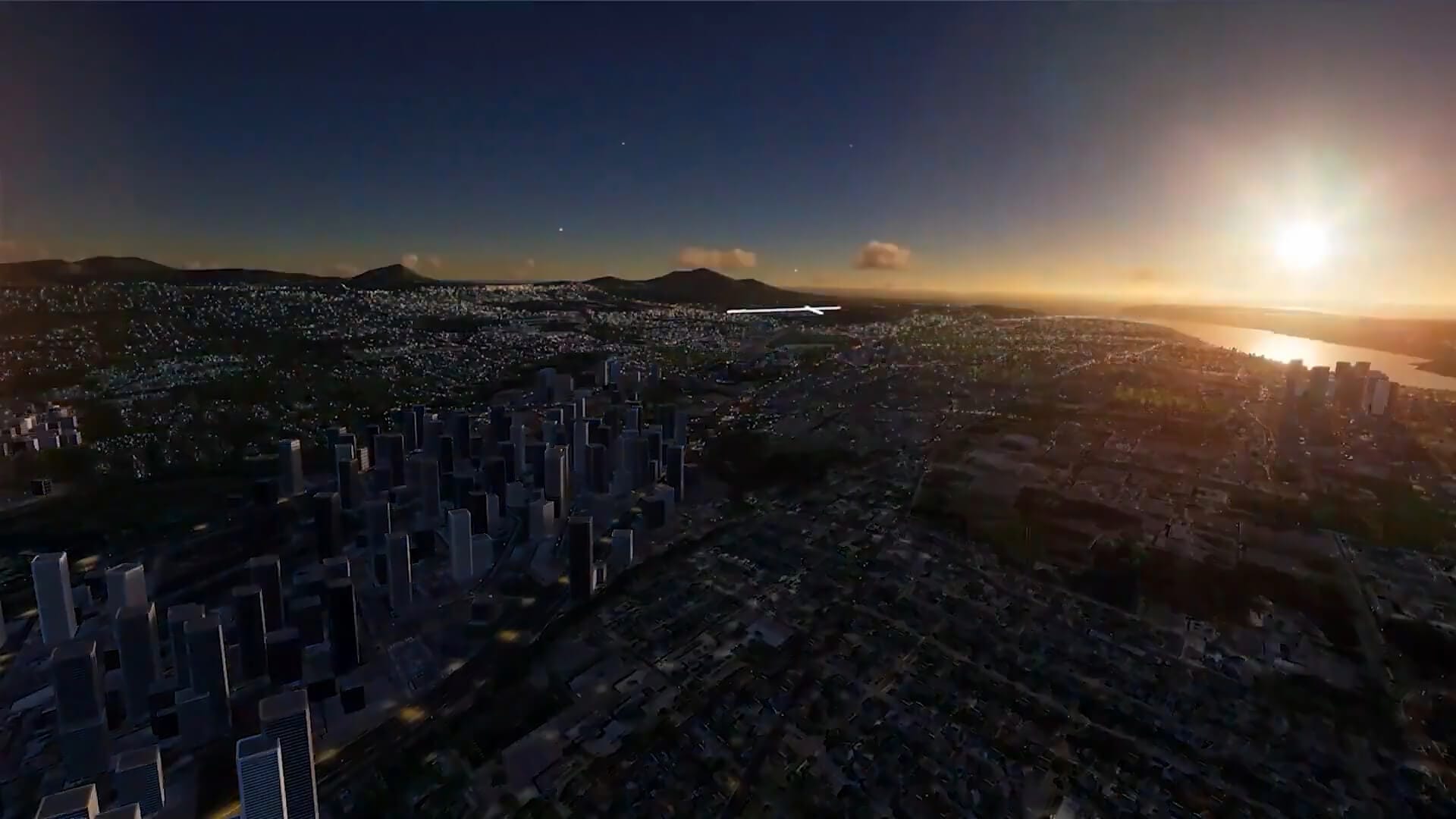 Image courtesy of CAE Inc.
CAE is making extensive use of satellite imagery and digital terrain data sources to allow rapid development of highly detailed, large scale gaming areas. There was a key moment in 2016, St-Hilaire says, which has made this advance possible. Up until then, each company had its own proprietary format for GIS data, and that format was closely aligned to the image generator architecture. At the same time, there was a strong demand from customers for better simulator interconnection.

Then the Open Geospatial Consortium® adopted the CDB format as a standard simulation GIS format to ensure interoperability. St-Hilaire describes this standardization as another “pivotal moment” in the evolution of simulators, and one that opened the door for CAE’s advances in that sphere.

CAE has already taken the first steps in its journey along this path. In November 2021, CAE announced its new Prodigy image generator (IG), which supports an order-of-magnitude increase in the number of entities previously available in a virtual environment. Prodigy boasts extremely realistic virtual environments from Unreal Engine; support for AI and industry standards such as DirectX, OpenFlight, and OGC CDB; a small footprint; compatibility with up to 8K projectors; and the highest standards of cybersecurity.
The development of Prodigy came about as a direct result of CAE’s commitment to leveraging existing hardware and software solutions that bolt together and provide seamless interoperability between systems. “It doesn’t make sense for CAE to reinvent the wheel and solve problems that have been solved already,” St-Hilaire says. “It makes sense to take what’s available and move forward.”

St-Hilaire is enthusiastic about what the future holds for CAE, with Unreal Engine under the hood of its next generation of simulators. “This is the journey,” he says. “Given the posture of our friends at Epic Games, and the posture of all the collaborators, we’re going to work together on solving the problems of the simulation community, and I am positive that this collaboration will bring us closer to our goals for training in aviation, and beyond.”

Interested in finding out how you could unleash Unreal Engine’s potential for simulation? Get in touch to start that conversation.
GET IN TOUCH