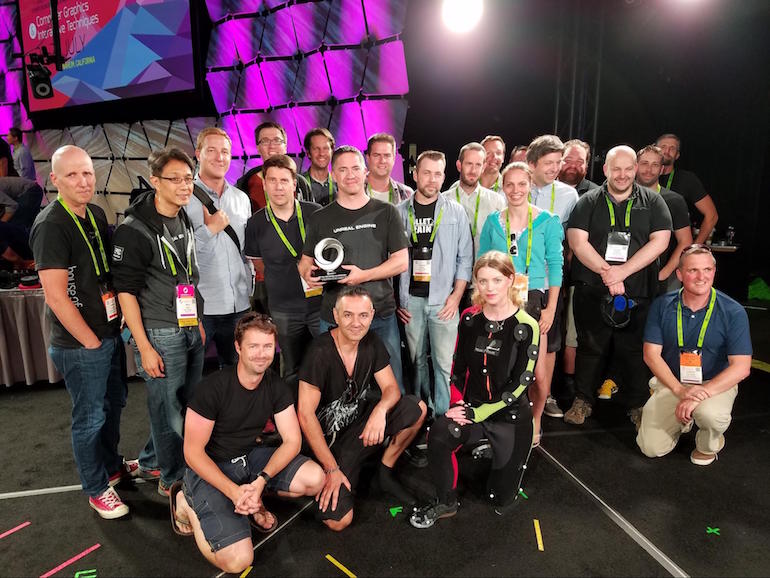 Expanding on the GDC 2016 Hellblade: Senua’s Sacrifice showing, Epic Games, Ninja Theory, Cubic Motion and 3Lateral reunited for the presentation, “From Previs to Final in Five Minutes: A Breakthrough in Live Performance Capture.” In just minutes, a scene based on Hellblade was shot, edited and rendered in front of a live audience.

With real-time cinematography every nuance of the digital character’s facial expressions, lighting, visual effects and sets are visible in real time to final render quality. Rather than capturing to film, everything is rendered as digital 3D data directly into Unreal Engine 4 using its powerful new Sequencer tool.

The demonstration required all involved to delve into uncharted waters. Unlike traditional games and film previsualization methods that only provide crude character representations, the experimental techniques revealed during “From Previs to Final in Five Minutes” empower creatives to capture, edit, playback, and export to offline 3D applications and output to video at any resolution. This content can also be published to virtual reality platforms.

“We’re honored to receive the Best Real-Time Graphics and Interactivity Award for the second year in a row here at Real-Time Live! during SIGGRAPH 2016,” said Epic Games CTO Kim Libreri. “This demonstration required the teams at Epic Games, Ninja Theory, Cubic Motion and 3Lateral to challenge ourselves both technically and creatively to think about the future for real-time cinematography and deliver a working example of what is now possible through the power of Unreal Engine 4 and the Sequencer tool.”

“Now, our hope is that artists and technicians are empowered to employ these technologies and techniques to usher in a whole new generation of real-time cinematography that will take interactive entertainment and storytelling to a level of efficiency and quality that has never been achieved before.”

Tameem Antoniades, creative director of Ninja Theory said, “Our end goal is to find ways to create fully interactive 3D experiences for future games and virtual reality experiences that feature incredible, immersive worlds and believable characters. This amazing collaboration between our teams had brought the dream a huge step forward to everyone’s benefit.”

Speaking of Ninja Theory’s ambitions, CEO Nina Kristensen said, “We’re looking to work with partners that are interested in using this new technique for their projects, whether this be in games, movies, VR or live performance. We see this new technology as a game changer and are proud to be pushing the boundaries of possibility in this space.”

Cubic Motion Chairman Andy Wood stated, "This award to the 'Dream Team' at SIGGRAPH 2016 proved beyond doubt that animation in real-time paves the way for believable digital humans in virtual reality and augmented reality. This changes the way video games, TV programs and films are made forever."

At SIGGRAPH 2015 Epic Games received the award for Best Real-Time Graphics and Interactivity for A Boy and His Kite, an animated short created with Unreal Engine 4. This new Hellblade collaboration is yet another indication of the engine's immense potential and marks a seismic technological breakthrough in real-time computer graphics and cinematography.