Come Together with Epic Games at GDC 2016

The Game Developers Conference is upon us, and we’re looking forward to seeing those of you who can make it to the annual pilgrimage to San Francisco.

Wondering how you can be a part of what we have in store for #GDC16? Great! Let’s get right to it. TLDR, there are dozens of talks which we’re excited to contribute to or influence in some way. A ton are listed below.

The most newsworthy hour will be our “State of Unreal: Epic Games Opening Session” happening on Wednesday, March 16, at 9:30am PT in Moscone West 3001 and livestreamed to Twitch.tv/UnrealEngine.

UPDATE: We've published our recap of everything new that happened at GDC 2016 starting with our opening session. Check it out, and keep an eye on our GDC 2016 playlist for even more useful videos. 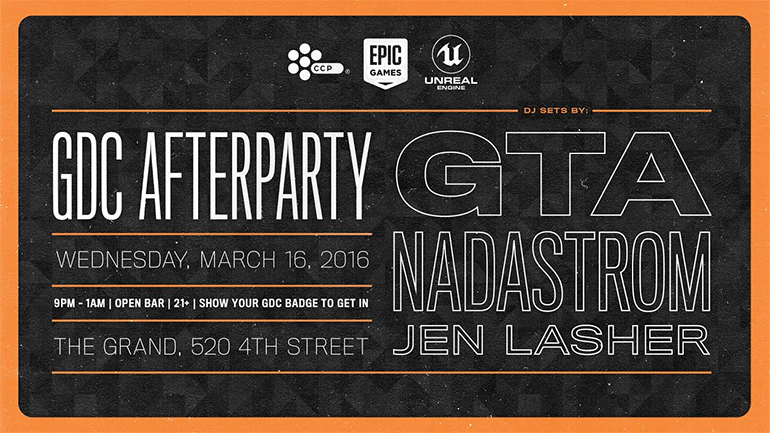 Before we dive into details around all of the learning content, we’re honored to announce what you’ll be able to enjoy at the Unreal Engine booth at Moscone South 1024.

Please help us welcome these amazing developers into the Unreal family. Stop by and say hello, and play these games we love from teams large and small:

FUN FACT: Obduction and Astroneer will be publicly playable for the first time ever, and we're honored to make this showing possible for Cyan and System Era Works, respectively. We’ve been fanning out over these two games and can’t wait to get them into your hands.

Have questions about Unreal Engine 4? Come on by!

Epic's senior developers and support staff will be on hand to provide Unreal Editor demonstrations, give talks in our open theater (featuring a new talk every 30 minutes!) and converse openly on the show floor.

Our team and a handful of outstanding community members will be happy to show you around.

What about VR, you say?

We have curated a range of outstanding VR experiences for you to try at the show this year. On the third floor of Moscone West, next to our friends at Indie MEGABOOTH and Train Jam, you'll find the first-ever GDC VR Lounge.

Swing by and check out leading-edge virtual reality experiences that inspire and entertain. Open all week, the GDC VR Lounge gives you the opportunity to go hands-on (and headsets-on) with a selection of the best VR content made for HTC Vive, Oculus Rift, PlayStation VR and Gear VR.

Hats off to the amazing Unreal Engine teams under our roof here:

GO FORTH AND PROSPER WITH UNREAL

Now, onto the GDC sessions. Please note that all times listed below are PST (GMT -8).

A few more talks from Epic and Unreal friends:

Jackpot! This is the Big Day.

These sessions in the dedicated Unreal Engine theater will be listed on the GDC website and app scheduler soon, but you’re seeing it here first!

And, if the above isn’t enough to whet your appetite, there are even more Unreal talks on Wednesday:

Introduction to Unreal
9:30am-12:30pm at the AMC Metreon
No GDC badge required - FREE!

Introduction to Unreal
9:30am-12:30pm at the AMC Metreon
No GDC badge required - FREE!

Massive thanks to our partner NVIDIA who are powering our PC and VR experiences at the booth. They're overwhelmingly supportive, as always.

That’s it for now! Stay tuned for updates right here and for the many announcements at GDC.

If you’re on Twitter, you can get all the latest updates by following @UnrealEngine.