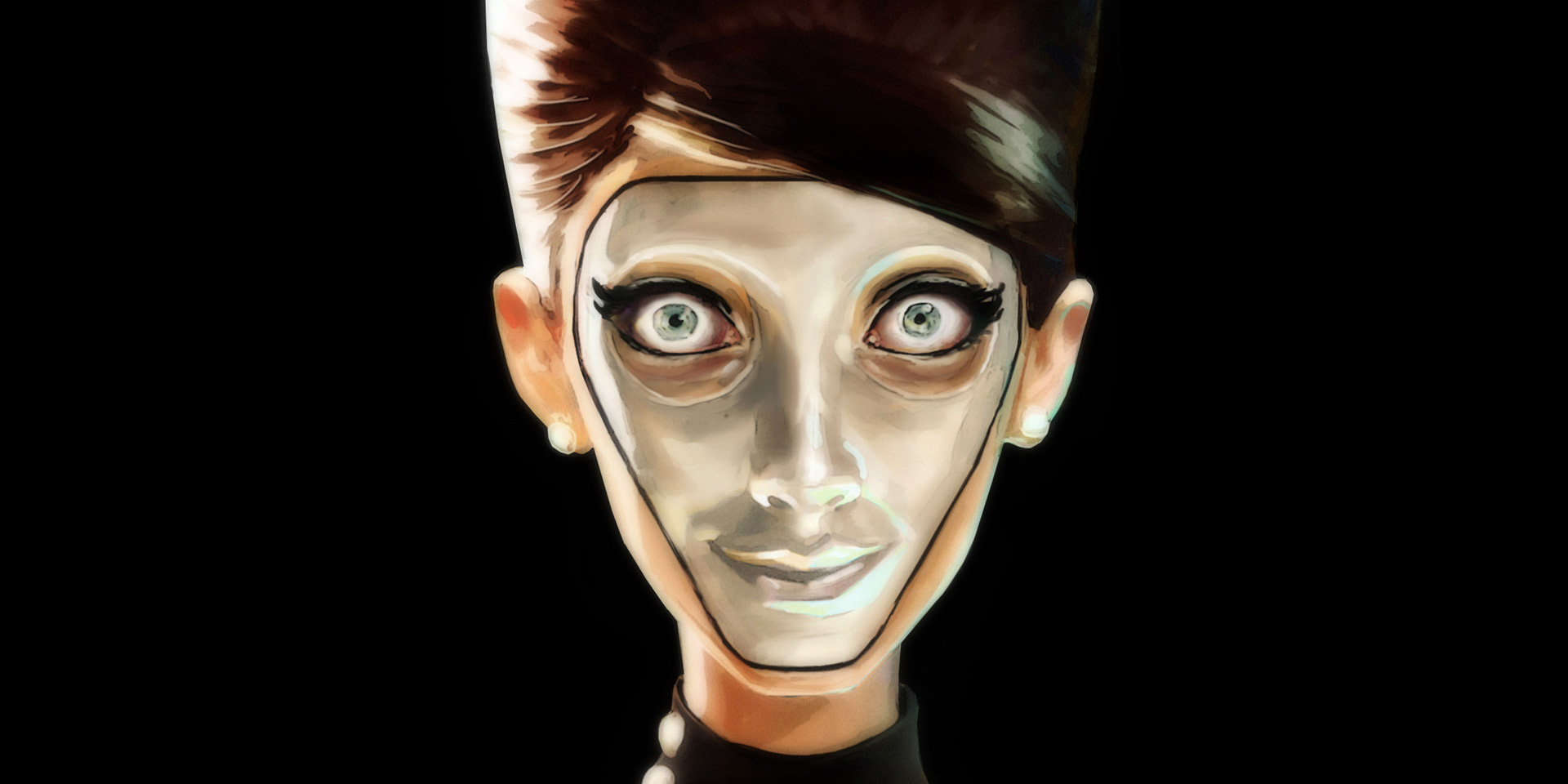 We Happy Few: Inside the Unreal-Powered Dystopia

It’s E3 2016, and the crowd grows oddly silent after Guillaume Provost, Creative Director at Compulsion Games, takes the stage at the Microsoft conference and presents the opening sequence to a game so intriguing, it generated the highest amount of new internet searches after the show.

The footage introduces Arthur Hastings, an archivist who decides to stop taking the state-imposed euphoric drug called Joy after a newspaper clipping brings back some dark memories. Arthur thinks maybe he does want to remember the past, not cast it so far out of his mind that the world feels like a much better place - as the other inhabitants of Wellington Wells do with a daily dose of Joy.

Arthur finds out exactly how deluded the overly happy townsfolk are just a few minutes after being off his meds. But without his usual smiley demeanor, Arthur is quickly identified as a Downer - a very undesirable threat to the entire city’s well-being. And so begins the effort to escape a city that’s become a prison of paranoia. 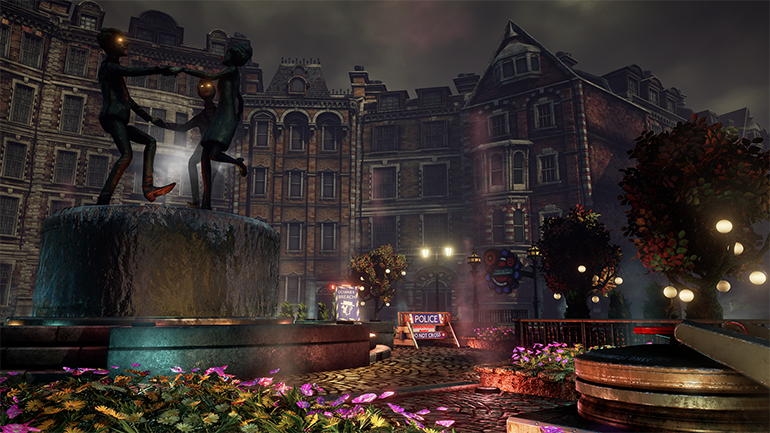 A gripping tale comes together with an eerily beautiful, procedurally generated 60s setting, deep crafting options, and a unique social conformity system to make We Happy Few one of the stand-out releases of the summer on PC and Xbox One. But Compulsion Games didn’t come this far without a serious evaluation of the tools that would best suit We Happy Few’s development. We chatted with Provost about the planning and technical decisions that lead to We Happy Few being built with Unreal Engine 4.

But first, a little background. Compulsion’s first title was Contrast, a film noir-inspired adventure/puzzle game in which the player helps a young girl with her family troubles, navigating the world by jumping in and out of shadows. Provost opted for UE3 with Contrast, finding it easier to recruit artists who were familiar with it (at the time, Compulsion was comprised of only seven people). But most importantly, UE3 allowed the developers access to the engine’s source code, and adapting critical pieces of lighting and shadow rendering systems - central to the game - enabled the small team to deliver their vision for Contrast. 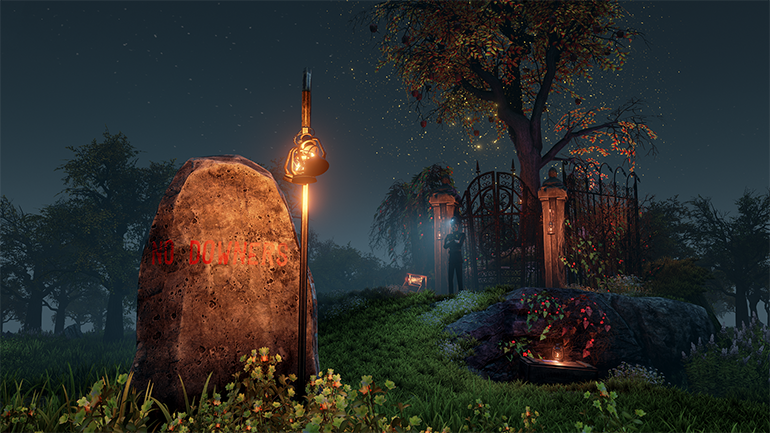 Sure enough, access to the source code is one of the key reasons Compulsion decided to stick with Unreal for their next project. Provost also had a chance to experiment with an early version of UE4, and if there were any concerns about being able to efficiently build the complex procedural worlds he wanted for We Happy Few, UE4 addressed all of them. After just a few sessions working with the prototype, Provost was impressed with the incredible suite of tools UE4 had to offer:

“UE4 is vastly better than UE3. It no longer has script code. Instead, it has super-powerful visual Blueprints that make every programmer on my team nauseous at the idea of what kind of damage artists and level designers might do to our performance or stability. It puts the onus on us to make sure we divide functionality between disciplines, and it gives me the flexibility to fix something in design instead of with programmers.”

But sometimes that flexibility comes with its own set of challenges, like when the team tries to save game states of complex Blueprints or replicate them over the network. It’s for the better, Provost decides: “I’d much rather have that flexibility, and the responsibility to take those decisions, than to be forced to cut critical features because I grow short of programming manpower near the end of a project, or can’t fix critical issues in the core code because I don’t have source code access.”

As for those procedurally created worlds, source code access is key. We Happy Few’s ever-changing city layout involves very unorthodox ways in which assets get loaded at run-time, and creates unique needs within the lighting pipeline, Provost explains. “Having access to the source code not only allowed us to tune the systems inside UE4, but to better understand how to architecturally graft ourselves on the engine to accomplish what we wanted.” 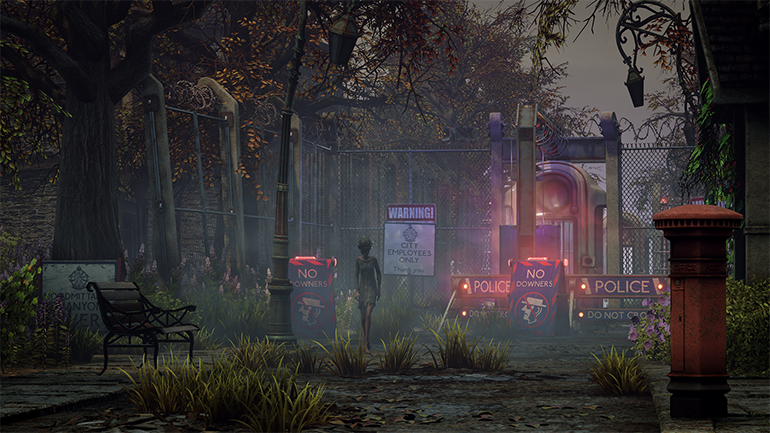 Beyond the extra freedom, UE4 also goes a long way in helping to shape the look of Wellington Wells. The city has various districts, some which differ (aesthetically, but also in terms of social expectations) very much from others, and each of these areas needs to feel like its own microcosm. Unreal’s physical rendering allows both the torn-down wooden houses of the Garden District and the fancier, lavishly decorated homes in the Parade District to look equally polished. And the node-based workflow of master materials and material instances makes building them a snap.

The player also does some building in We Happy Few; in fact, crafting is essential to survive more than a few hours in Wellington Wells. From turning plants into precious ointments to creating entire outfits meant to blend into specific districts, the crafting system features many different objects across a variety of materials and textures. Unreal’s rendering system is useful here too, ensuring that everything is nicely defined and behaves as it should in different types of lighting.

“As the writer of We Happy Few, I’m delighted that I can use Unreal to change the names of things and their descriptions, and to write objectives and journal entries. The environment is powerful and yet intuitive. I’ve never had any training in Unreal, but I can do what I need to do with a minimum of coaching,” Alex says. 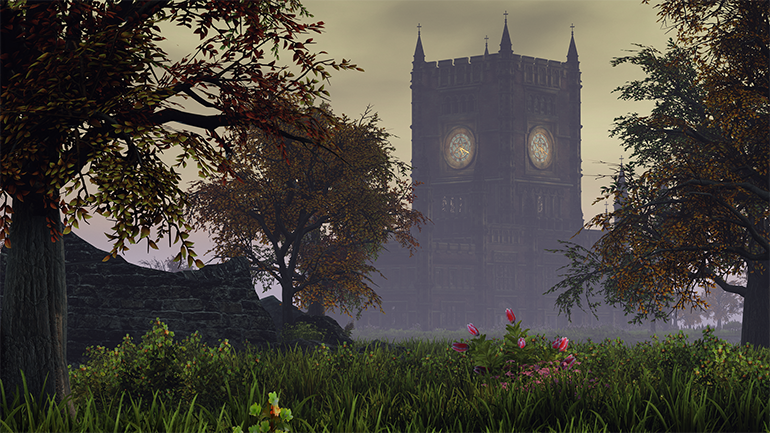 Vince, one of the level designers, says the frequent updates are especially handy. “All the new updates always bring something for everyone,” he says. On his radar right now: the fully non-linear, real-time cinematics and animation tool Sequencer.

Then there’s Sam Abbott, Chief Operating Officer. “I like Unreal because I can say ‘it’s Unreal!’ Never gets old. But then again, mostly I just talk to my mum and she’s exceptionally patient.”

“There’s no crystal ball for picking an engine,” Provost continues. “A lot of things factor into the decision.” But for a team like Compulsion, UE4 is just right. “As people who value great content tools as well as the ability to pop open the hood of the car and mess around in there when we need to, we’re very happy with our choice.”