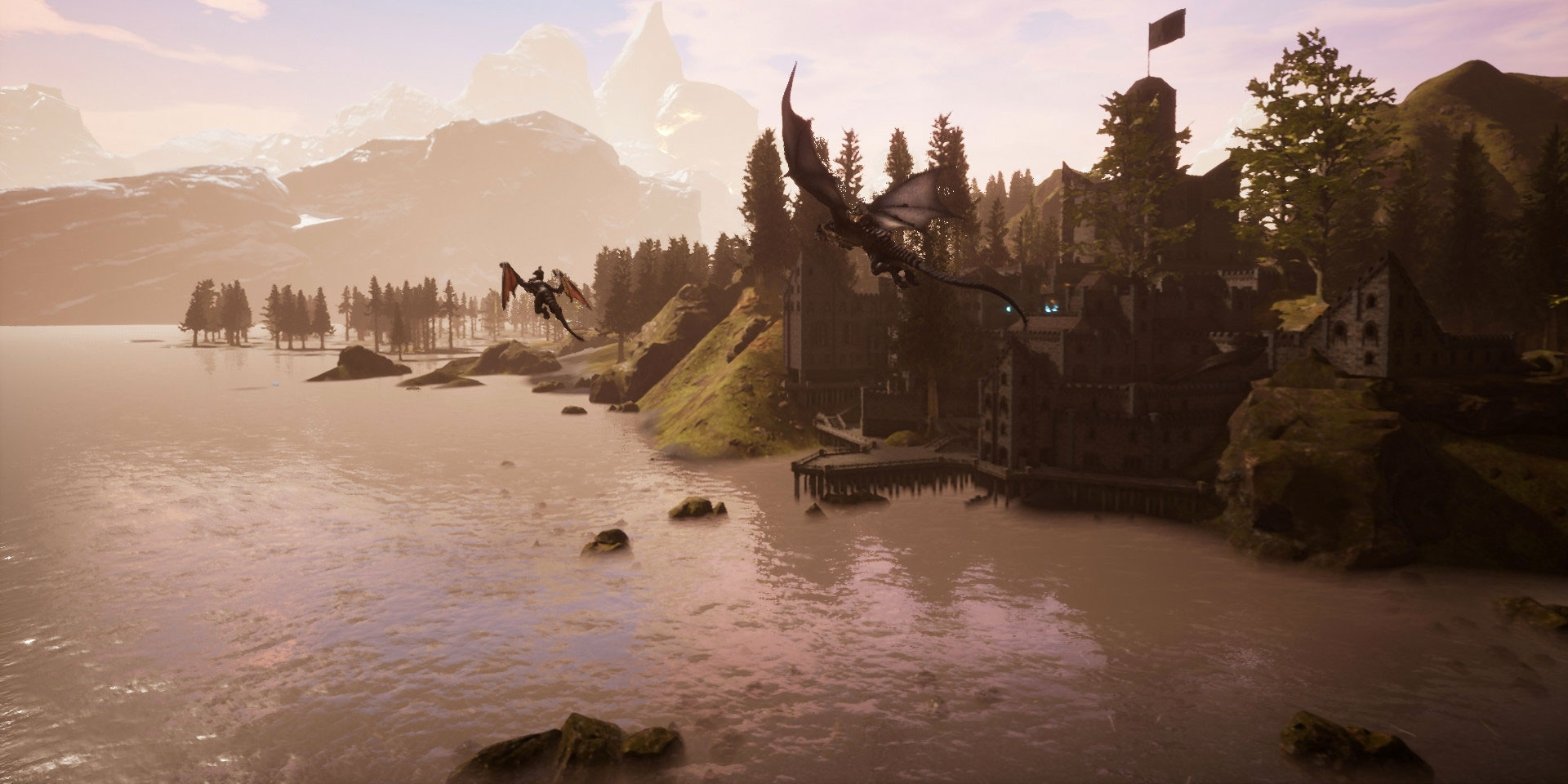 The Magic Behind Citadel: Forged with Fire

If you’ve been keeping an eye on Steam’s top sellers as of late, you’ve no doubt noticed a title that has seemingly cast a spell on aspiring wizards. Citadel: Forged with Fire is a massive online sandbox RPG that features elements of magic, spellcasting, building, exploring and crafting. Made available via Early Access within a month of being announced, the title is creating a type of moment-to-moment excitement that’s already enchanting players worldwide.

Developed by Blue Isle Studios, the team behind successful (and yet very different) titles such as Slender: The Arrival and Valley, Citadel tasks newly minted apprentices of the magic arts with exploring the dangerous world of Ignus where they tame mighty beasts, forge alliances, explore uncharted territories and even fight for dominance of the sprawling digital domain. If initial reactions are any indication, the game has already started igniting the imaginations of players inspired by popular fantasy novels and films while immersing them in ways that feel both personal and powerful.

Individual player progression is of course key to the experience in Citadel, but the game also invites players to consider the impact allies will play in their journey. Central to player success is the concept of forging bonds as players seek to establish and build their House while tackling increasingly tumultuous tasks.

We’re less than a month in, but the game is already building a community that is both vocal and vibrant. I recently caught up with Blue Isle Studios Managing Director Alex Tintor to find out more about the project, the role Unreal Engine has played in its development and the plans for Citadel: Forged with Fire moving forward.

Q: When compared to your previous works, Citadel: Forged with Fire is a very different style of game for the team at Blue Isle Studios. What inspired you to make a massive online sandbox RPG?

On a personal level, Citadel represents the culmination of probably 20 years of dreaming. Growing up as a kid I was obsessed with the Harry Potter books, Lord of the Rings and more recently, Game of Thrones. It wasn’t until a few years ago that this game started to become a reality for us. It’s an incredibly ambitious project for an indie studio to take on, but we were convinced that we have the right team to tackle a project like this head on.

Q: Can you give us a rundown of the type of adventuring players will experience in the game?

Players have complete freedom to explore and engage with the massive world of Ignus however they see fit. Players can plunder caves for loot, raid NPC encampments, tame and ride mighty beasts, build enormous castles and can craft and wield a large variety of weapons, armors and trinkets.

As a social game, we encourage players to forge alliances and tackle these goals together. Our game allows you to pool your resources to create larger, more elaborate castles. Some of our high level caves are so dangerous that it’s important for to players team up if they want to come out alive. 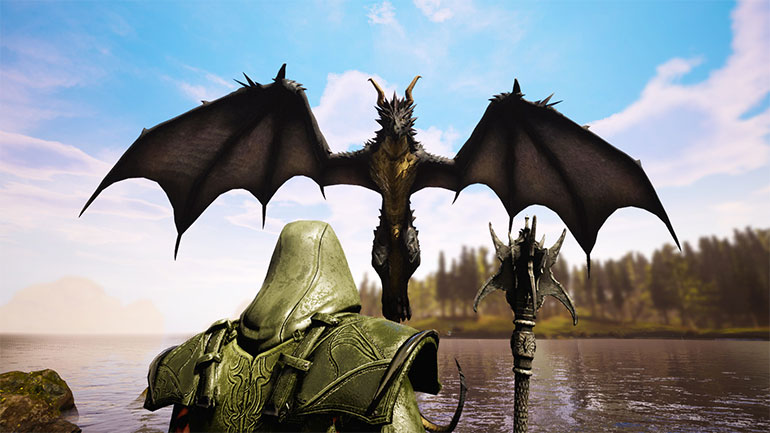 Q: The world of Ignus seems absolutely enormous! Was having a massive environment to explore a pillar of the experience you wanted to create?

Absolutely! Having a large world means that everyone has space to make their mark and stake their claim to their own little corner of the world. We worked hard to make sure Ignus was large enough to support large-scale structure building, but also dense enough to encourage chance encounters and emergent social gameplay with strangers.

Q: Playing as an apprentice wizard means that magic plays a huge role in the game. What control will players have over their magical abilities?

We have four schools of magic spells which are divided amongst our four weapon types: Wands, which are good for speed and rapid fire casting, Staves, which are best for support and AOE type spells, Gauntlets, which are useful in casting beam-type damage-over-time spells, and Melee weapons, which possess a short range but deal a significant amount of damage.

We also grant players access to Utility Magic which enhances their ability to rapidly harvest, heal friends, pacify and tame dangerous creatures, or use Telekinesis to rip an entire castle out of the ground. 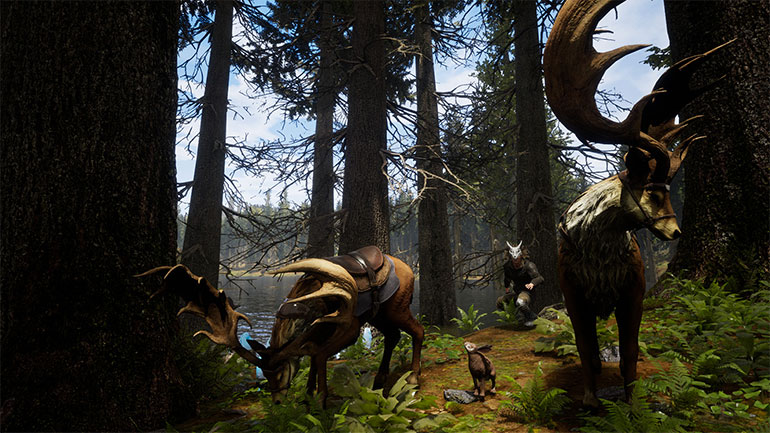 Q: Inter-kingdom conflict is touched on in the description. What can we expect out of this mechanic in the final game?

Players can form Houses and work together to assemble massive and intricate castles. House founders get to design a house flag, a house motto, and can invite others to join them and work together cooperatively. We’d really like to flesh this House system out much more as we work through Early Access to allow players to assume ranks of superiority within these Houses and enable players to engage with opposing Houses either diplomatically or aggressively.

Q: It seems that the many beasts of Ignus aren’t just for defeating. Beyond battle, how will players interact with the game’s many monsters?

Every creature in Citadel can be tamed using the potently powerful Pacify spell. Tamed allies can be commanded to either stand guard at a player’s castle, or accompany them on their adventures by attacking enemies and carrying loot.

Some creatures, like dragons and giant eagles, can even be fit with a saddle and mounted. It’s a real thrill to hop on the back of a dragon and observe the expansive world from many miles above! 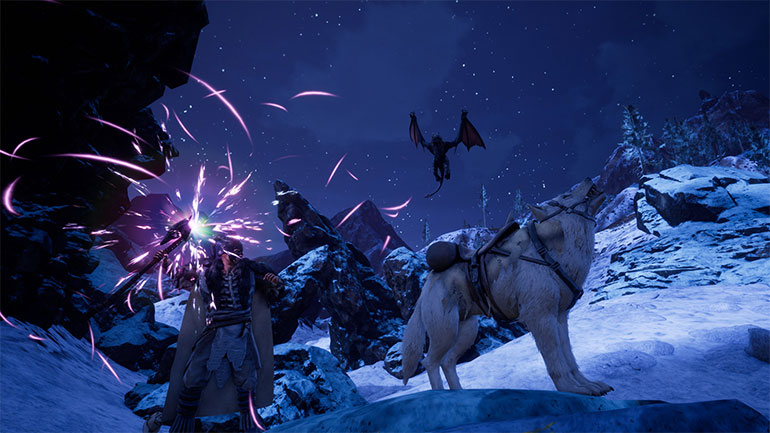 Q: Seeing the player fly a broomstick was one of my favorite moments of the trailer. Can you explain how this works in the game?

Broomsticks can be crafted relatively early in the game and are a very convenient means of flying. Players can equip their broomstick and press “F” to hop on and fly around! They’re great for quick escapes from dangerous enemies or quickly traveling shorter distances. Their main drawback is that they consume mana while used, so it’s advisable to stock lots of potions when flying longer distances. I’ve seen some players get caught unprepared and run out of mana mid-flight. Be warned, this will result in a very painful and sometimes fatal fall to the ground!

Q: How has Unreal Engine 4 helped the team at Blue Isle Studios bring its vision for Citadel: Forged with Fire to life?

Simply put, Citadel would not exist today if it weren’t for UE4. When we started the project, our studio had only limited experience working with Unreal Engine. Over the course of development we not only learned a brand new engine but also created a large scale, open world crafting and fighting RPG, and made it all online. I think this speaks volumes to UE4’s power as an engine. 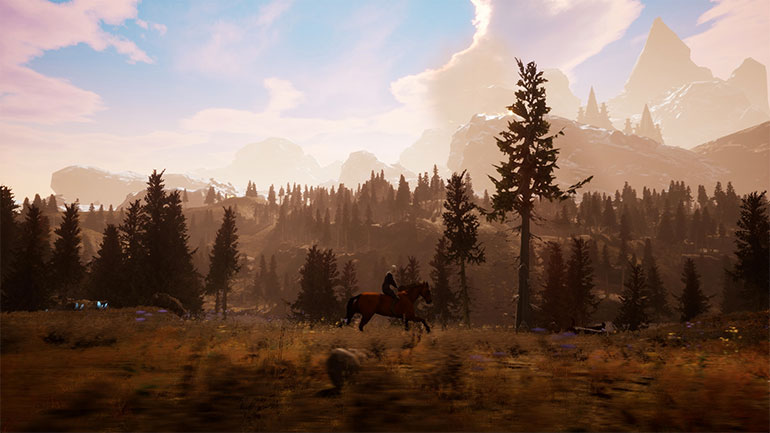 Q: Are there any specific aspects of the engine that have particularly assisted the team throughout development?

The terrain tools were incredibly useful for level designers in bringing a massive open world to life. Given the size of our world, distance shadows and level streaming were essential in making sure the game not only looks incredible, but performs great too. On the gameplay side of things, our game designers made heavy use of data curves and tables for balancing purposes.

Q: What type of players do you think will enjoy/appreciate this game the most?

Anybody who has ever dreamed of being a wizard and possessing untold magical powers! We’ve provided everything a player needs to live their specific wizarding fantasy, be it staves and floppy hats or wands and broomsticks! Citadel is our vision of the ultimate open world fantasy sandbox and we’re incredibly excited to see players jump into the world and build, fight, explore, and fly!

Q: The game recently entered early access (congrats!). Where can players go to get their hands on the game?

Citadel: Forged with Fire is now available on Steam for the price of 24.99 USD.