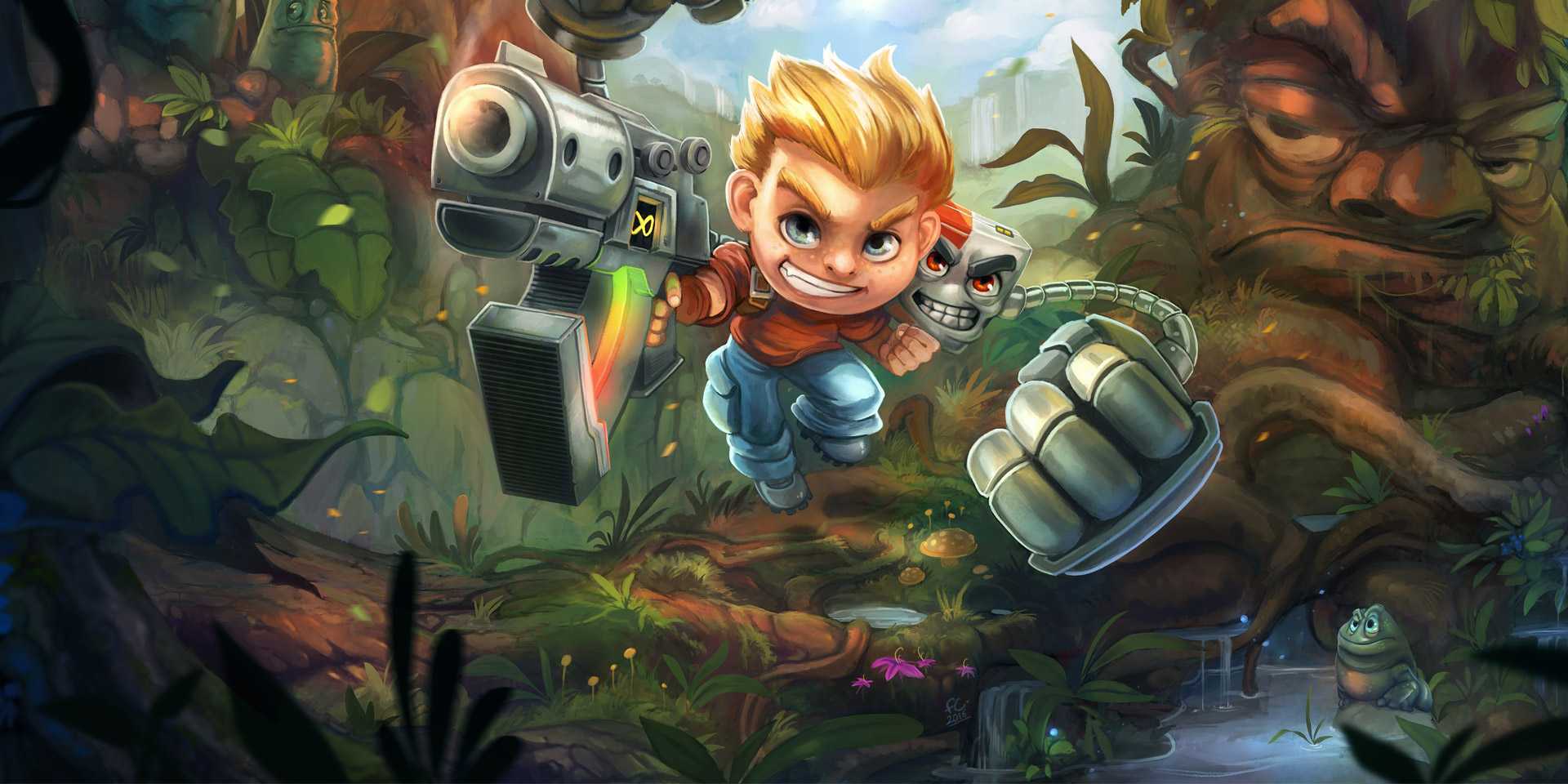 It’s time to dust off those nostalgia goggles and get ready to dive into Rad Rodgers as it aims to bring the golden age of '90s era platformers back to life. Rad Rodgers embraces all the things we loved about games like Commander Keen and Jazz Jackrabbit while adding a few modern twists of its own.

Paying homage to beloved games of the past doesn’t mean that developer Slipgate Studios isn’t bringing something new to the table. Making the most of Unreal Engine, the Danish team has crafted an absolute stunner that is more visually striking than any game that inspired it. With quick wit and a sharp tongue, Dusty leads his pal Rad on an adventure that speaks to the kid in you, but sure as hell isn’t for kids.

Celebrating a massive update on PC and the release of Rad Rodgers on PlayStation 4 and Xbox One, Slipgate Studios’ managing director Frederik Schreiber gives us the inside scoop on the journey of Rad Rodgers’ development and adapting the old school platformer to the modern age.

Rad Rodgers is inspired by '90s era Apogee platformers like Commander Keen and Jazz Jackrabbit. How did that inspiration lead to the idea and creation of Rad Rodgers?

We always wanted to create an old-school side-scroller in the same style as the games we grew up playing; Classic Apogee, Nintendo, and Amiga games.

The first inspiration was the Amiga classic "Ruff 'n' Tumble", which Rad Rodgers is heavily inspired from. We loved the cartoony visuals, combined with heavy weaponry.

For the gameplay itself, we were very inspired by the precision jumping of the Megaman series, combined with the open level nature of Duke Nukem 2. We didn't want to go total Metroidvania but instead wanted to keep each level contained. The open level design philosophy is something 3D Realms popularized in the '90s, with Duke Nukem 3D and Shadow Warrior. We wanted to bring this to Rad Rodgers as well.

This means that each level has multiple paths, doors, and puzzles, which you can mostly approach in whatever order you like. 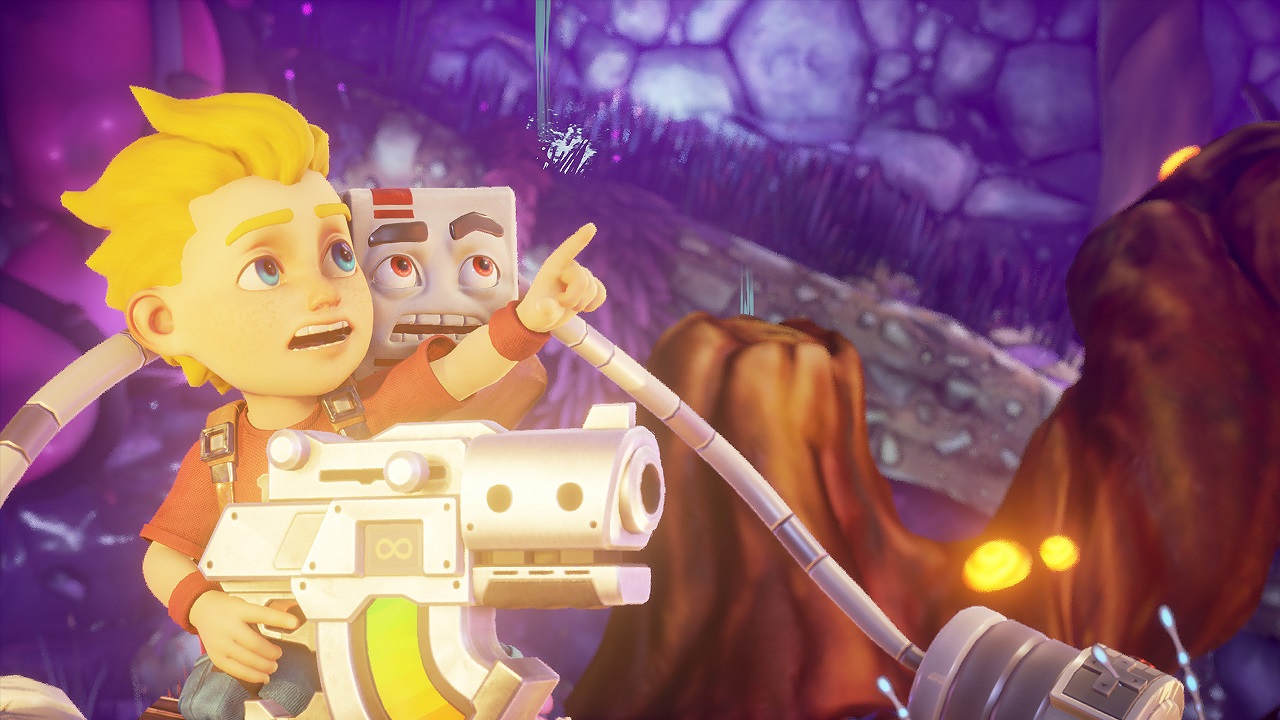 How did you go about paying homage to the old classics while tailoring a game towards a new generation of gamers with modern mechanics and sensibilities in mind?

It was important to us to focus on what we loved in platformers first and foremost. Highly skill-based precision platforming became the first core foundation, something we loved from classic platformers such as Super Mario Bros 3 and Megaman.

Secondly, we wanted to add the open level design philosophy which is at the root of all the games we develop. Precision shooting, and a unique and interesting take on ‘repairing’ the world, through the Pixelverse, added some flavor to the game, but most importantly, we wanted to make sure the game was extremely solid, responsive and fun to play. We feel a lot of innovative games forget about how important the core is.

If the game is solid and fun, everything else is icing on the cake, but the foundation is most important.

Last but not least, we had very high ambitions with our visuals. Our goal was to make Rad Rodgers look like a real-time Pixar movie. After reading one of the first previews from Destructoid, we were humbled and proud of having achieved that:

"I’m going to get the best feature out of the way first; the graphics are unbelievable. Watching that initial trailer, I thought I was looking at an FMV. Rad Rodgers runs on Unreal Engine 4 and looks phenomenal. This is like finally having a playable Pixar film as a game, something that only Ratchet and Clank ever managed to make possible." - Destructoid 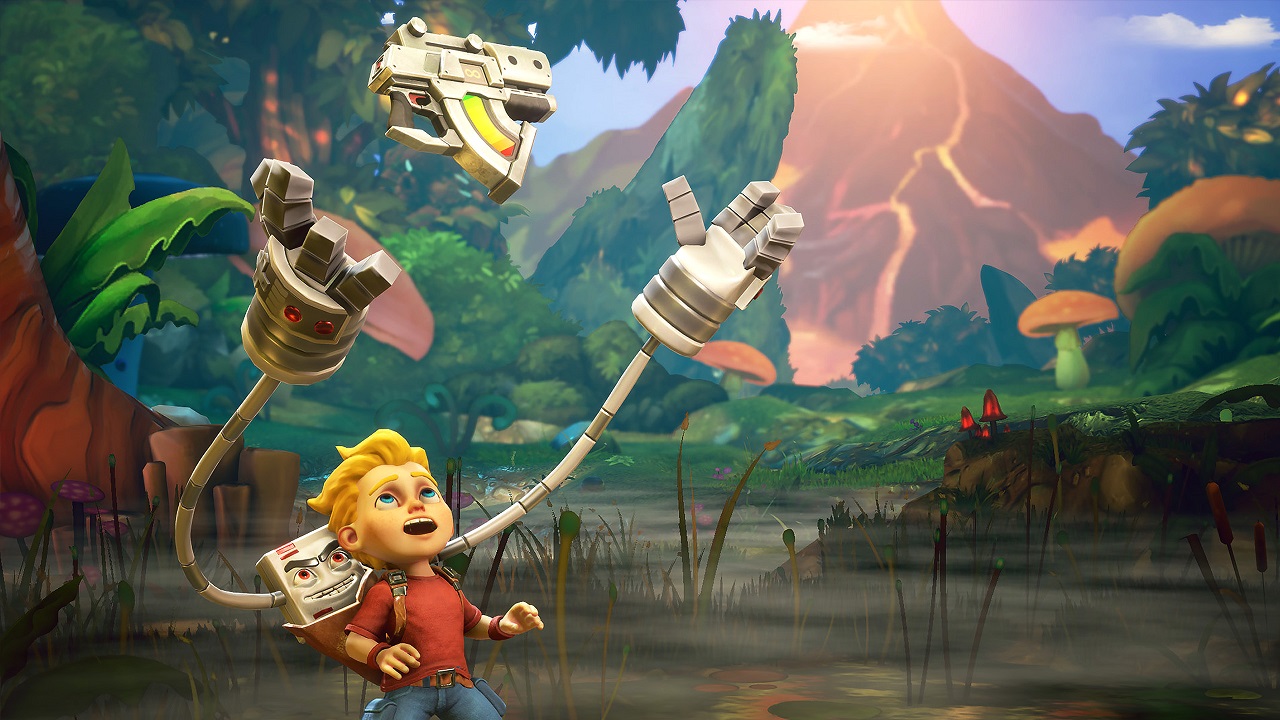 The dialogue between Rad and Dusty is one of the highlights of the game. Tell us about the writing process (and how much fun you must have had) putting together their banter.

When brainstorming Rad Rodgers, we wanted the chemistry between the two characters to be something of a mix of Bender from Futurama and the innocence of a child. Interestingly enough, while we were working on Rad Rodgers, Rick & Morty premiered and basically introduced the very idea we were aiming for.

The writing process was very adult at first, so we decided to turn it down a notch to appeal to a slightly wider audience. We always loved this mix of cute graphics and ultra-violent cartoon gore. With the quirky dialogue thrown in the blender, we ended up with this "Rick & Morty meets Pixar" mix we’re really happy with.

Ok, so you tamed down the banter a little bit. What else hit the cutting room floor as you furthered development in Rad Rodgers?

In the original design, Dusty's ‘Fly’ ability in the Pixelverse sections was depicted as him ‘farting’ for momentum. The constant fart sounds were later removed, as they became a bit too annoying. A leftover of the old design can still be seen actually! If you manage to zoom in on the back of Dusty in photo-mode, a small butt-crack can be seen under the back panel of his body.

Also in the original design, at some point in the game, Dusty was going to have the ability to pause the game. While all enemies were frozen in space, Dusty would use the "PAUSED" text as an in-game platform to reach an enemy, which he would then stab with a knife, while frozen in place. We later removed this as it was a tad too crazy for the character of Dusty.

During development, we revised how the Dusty abilities would affect the game many times, in fact. The point of Dusty was that he was the console powering the game, which means that he's able to alter and change the game on the fly. Ideas ranged from the ability to jump outside of the TV frame and enter the frame again from another side, to having different cartridges as pickups, which you would stick in his mouth to unlock different abilities and suits reminiscent of old-school video game characters. We ended up with the ‘Pixelverse’ as a good middle-ground.

We'd love to dive back into many of these early ideas for potential sequels to Rad Rodgers. 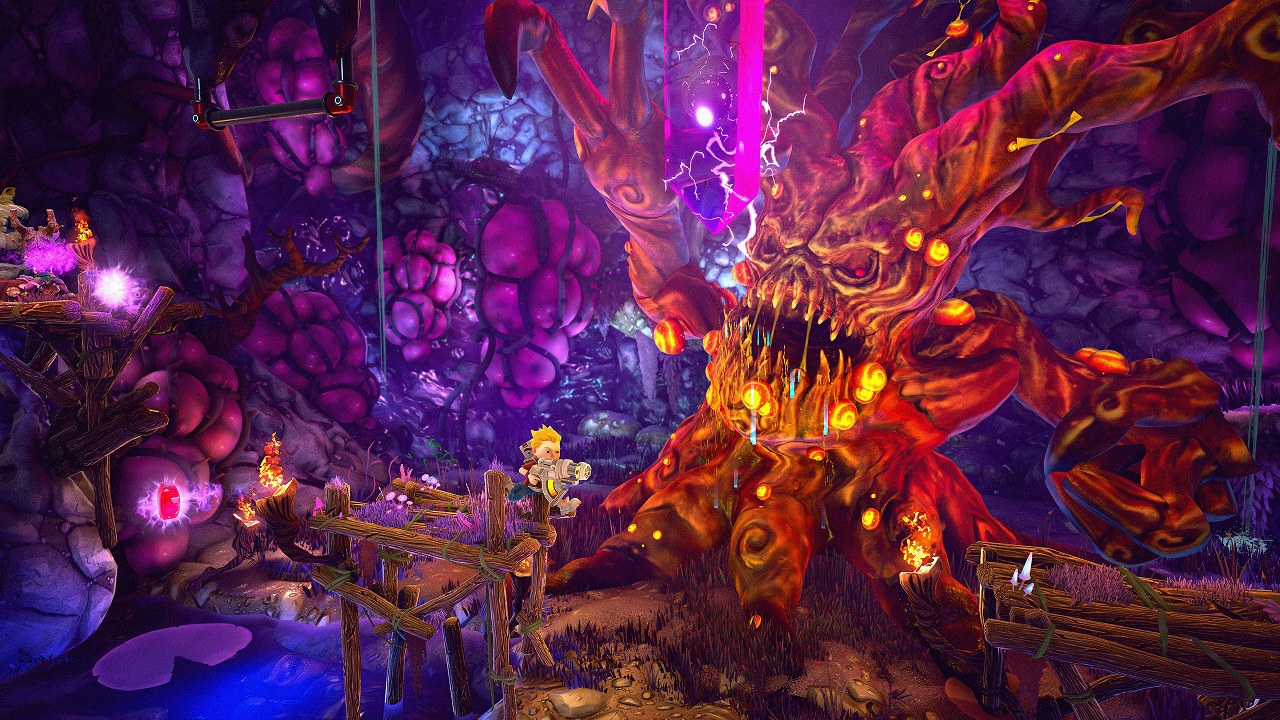 You hint at hard to find collectibles and even harder to find 'classic secret rooms' in Rad Rodgers. How hard is it exactly? Will only the best of the best conquer Rad Rodgers completely?

The secrets and hidden items are pretty hard to find, but not Castlevania 2: Simon’s Quest hard. You don't have to stand still in a corner and wait for a tornado to pick you up in Rad Rodgers!

We have a general rule for secrets, which many classic platformers follow; Donkey Kong Country is a great example. In Rad Rodgers, you can almost always see the collectible, but how to get to it is the challenge. We wanted to continuously tease the player by hinting at secrets, but not showing the right path.

A great example of this in older games is the third level in Ruff 'n' Tumble for the Amiga. Right in the beginning of the level, you're presented with a jump pad, which takes you to this area. The only problem is that it's impossible to reach the platform through the jump pad.

The area is teased, but you have to find out yourself, how to get there. This is the same philosophy we use in Rad Rodgers.

Rad Rodgers was funded through a big Kickstarter investment. How has the feedback and interaction with fans impacted development of the game?

The fan feedback was key to the development of Rad Rodgers. We had an overall core of the game ready when we launched the Kickstarter, and we were pretty happy with our vertical slice, but we could never have imagined the impact it would have. The feedback from our backer community ultimately helped to shape the direction of the game.

During the Kickstarter, the game shaped into something tighter, smoother and way more interesting than we originally envisioned. All thanks to our backers! 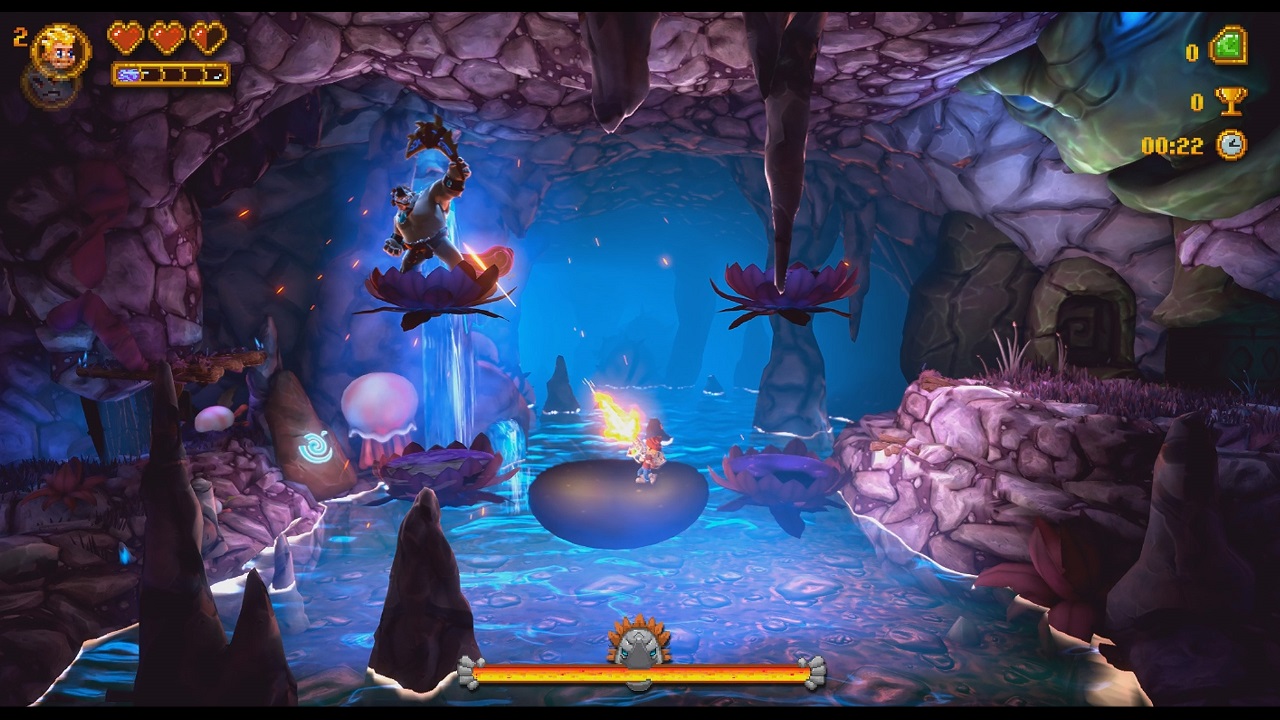 You're dropping a big update to Rad Rodgers alongside its long awaited console release. What are some of the new additions you're most excited about? Can gamers expect an announcement on World 2 at some point?

With this update, we're adding a ton of new features. Alongside new mini-games, bonus artwork, and new unlockables, the features we're probably the most excited about are the leaderboards, hats and the new levels.

The leaderboards are a great way to challenge your friends. At the end of each level, your total score is calculated based on how fast you went through the level, and how many secrets, enemy kills, and collectibles you managed to find.

The Hat system was another fun way for us to add even more (and harder) secrets to the game. We now have some pretty crazy secret areas, where you can find and unlock different hats for Rad. They are cosmetic only but add something new and fun to the collectible part of the game.

Last but not least, we have three new mini-game levels, which introduces a Pogo Stick, and two massive new levels taking place in a rainforest and ancient ruins. We're also throwing new enemies, puzzles, and mini-bosses into the mix. It’s a ton of content and I assure you, we’re not finished yet! 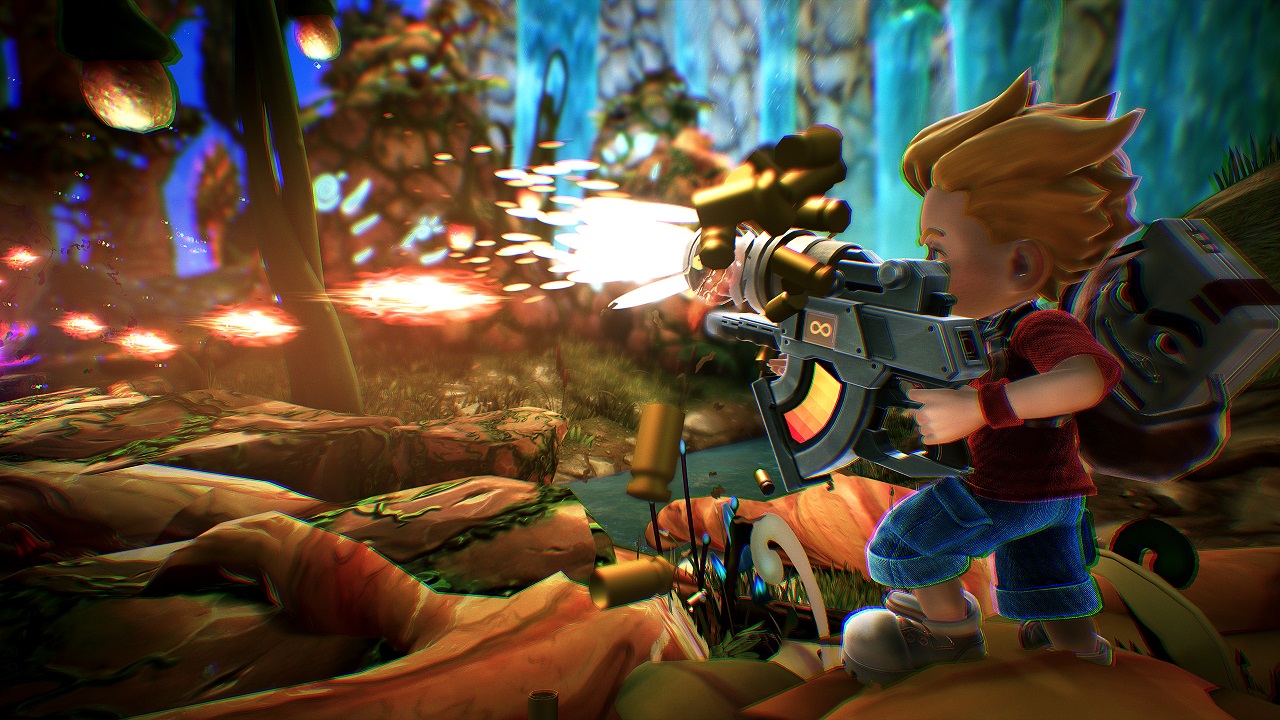 How was the process of adapting Rad Rodgers across multiple platforms using Unreal Engine?

Unreal Engine allowed us to quickly get builds up and running for both the Xbox One and PlayStation 4. Getting cooked builds to run was our highest priority as we wanted stable code to execute on each platform as fast as possible. Unreal Engine made this very simple and straightforward, which allowed us to put all of our focus into optimizing and adding new content.

Tell us about a favorite tool or feature of Unreal Engine 4 and how it aided you in the development of Rad Rodgers.

What advice do you have for burgeoning developers jumping into Unreal Engine for the first time?

Unreal Engine 4 is an open ecosystem, which means that you can utilize the engine to its fullest. Even though Blueprints are extremely powerful, our advice for programmers jumping into Unreal Engine would be to learn C++. Besides the performance benefits, you can extend the engine to suit your needs and add features you need along the way.

Where can people go to keep up on development and news for all things Rad Rodgers?