“We were talking to Bill about this game we wanted to do that has tanks and a robot dog,” recalls Skunkwerks Kinetic co-founder Craig Martin. “The more we talked about it, the more he said, ‘Wow, that’s really cool’. And we said, ‘Can you do the story for us?’”

Bill is a friend of a friend. But to those of us not on first-name terms, he’s William Gibson - author of Neuromancer and father of cyberpunk.

Before long, Bill had presented Skunkwerks with the MEG 9 universe.

“It was really enough material for three games,” Craig remembers. “So we were like, ‘Let’s get the first one out.’”

More friends of friends introduced Skunkwerks to Chris Cross, of Metal of Honor fame, who has since acted as an advisor for the young studio.

“He has been instrumental in helping shape our levels and game design,” says Craig.

Early plans for a mobile game were blown out of the water when Unreal 4 went free, allowing the team the power to make a PC and console game instead. What Skunkwerks have now is a highly intriguing prototype that proves they aren’t just well-connected. 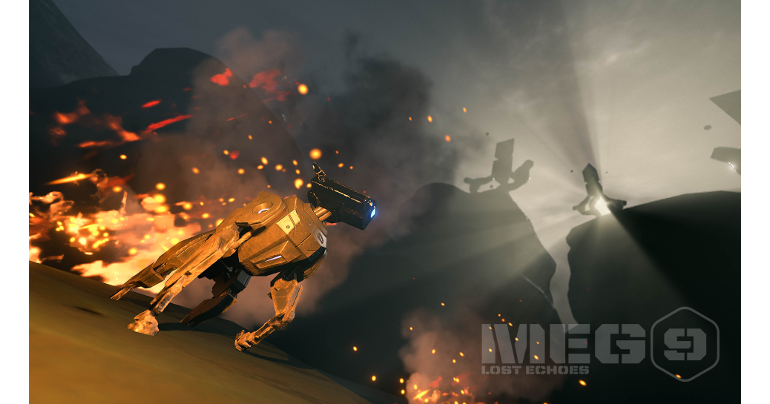 At its core, MEG 9: Lost Echoes is a contemporary take on a late ‘80s AppleTalk networked game named Bolo - in which studio co-founder Ian Jardine would drive a tank, and a little green man would frequently climb out to build defences and plant mines.

“Instead of a green man, we have a robot dog,” says lead engineer Kevin Brown. “Because why not? Everyone loves dogs.”

In MEG 9, you’re controlling a huge, ten-ton rig on behalf of a corporation investigating an alternate dimension - the Probability Aperture. The corp runs a number of research facilities within the Aperture - which simply means ‘hole’, Portal fans - and one of them has gone offline. Your job is to get in there, check the place out, and get it back online if at all possible. 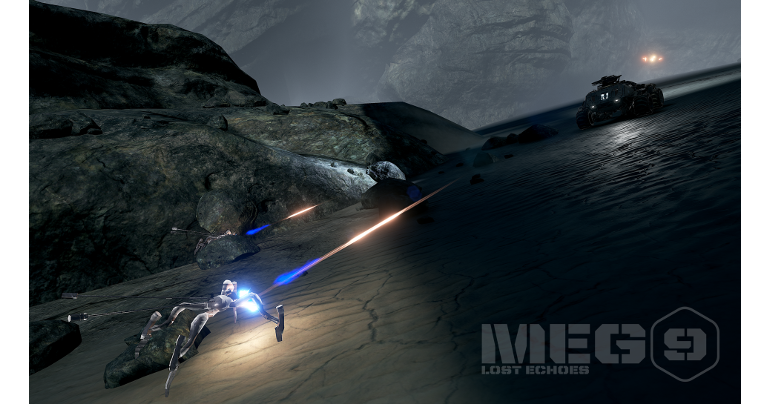 ‘Getting in there’, however, means ‘steering the rig from a very safe distance’. Bolo’s top-down view gave the impression that its tank was being controlled remotely - and Gibson’s fiction gives that idea form. In the MEG 9 universe, the corporation has learned not to send live pilots into the Aperture because they tend not to come back alive.

As Brown puts it: “They thought, ‘Let’s maybe not do the whole alternate dimension thing for the time being.’”

Instead, you’re witnessing events in third-person through the eyes of a drone.

“We’ve justified the use of the camera,” notes Brown. “I think that’s super important, and not a lot of games do that.” 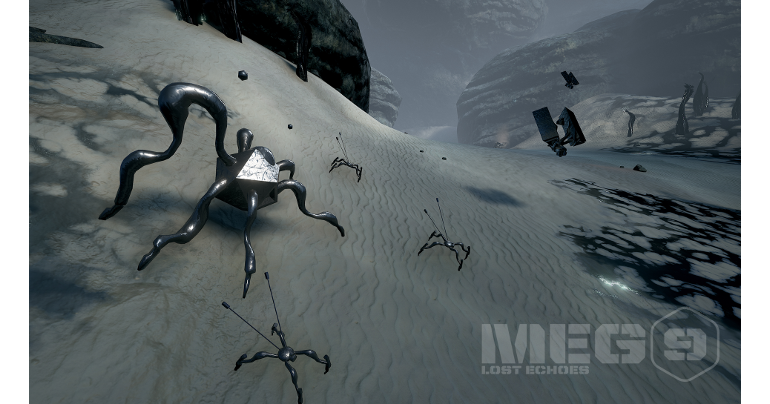 While company personnel pilot the rigs, they tend to leave the fiddler, manual tasks to MEG units - robots that act as the corp’s eyes and ears in the Aperture. It’s one of these reassuringly doglike units that you find huddled under the wreckage of a destroyed rig shortly after dropping into the dimension’s otherwise desolate landscape.

This particular unit - who the team refer to as a ‘she’ - tells you about a synthetic parasite called ‘corruption’. Corruption is sweeping the Aperture, turning the heavy machinery of the corp’s facilities into biomechanical monsters. There’s a very real risk of this corruption spreading to the real world, so it’s your job as videogame protagonist to reach a central facility and stop that from happening.

You fight your way there by shooting the guns mounted onto your rig and dropping support units in real-time. While some set pieces encourage a style of tower defence, there’s no defined strategy - and no need to stay static when units can be deployed while your wheels are still spinning. 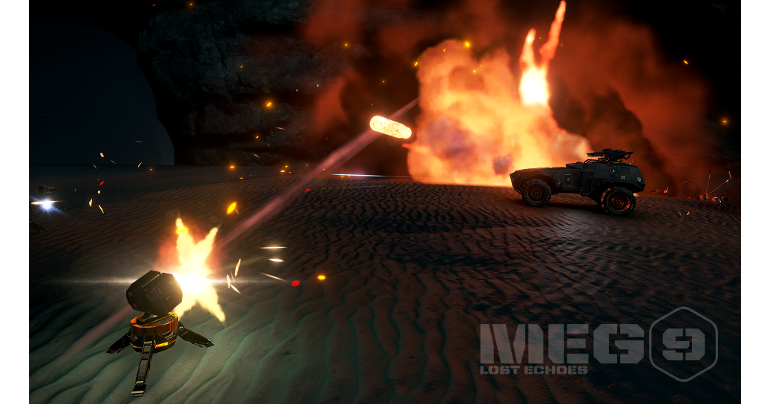 “It allows the player to control the tempo that they want to play at,” says Martin. “If they want to slow it down they can take their time, set up their defences, and then trigger the enemies.”

“Nobody does it the same way,” adds Brown.

MEG the robot dog hops in and out of your vehicle via a hatch in the back, acting as a combat companion who can, for instance, boost the health of your deployables within a radius. Outside of battle, she hacks objects and interacts with terminals in the world - always helping but never totally under your control.

“She’s the storyteller, so we want players to care about MEG,” says Brown.

There’s a twist: MEG herself is corrupted, and how that infection might proceed over the course of the game is a mystery. Your handlers within the corp advise caution.

“I’m not going to ruin the story for you, but you do notice that this MEG unit is quite a bit more intelligent than the standard AI,” Brown hints. “That’s a real jumping-off point for the story.” 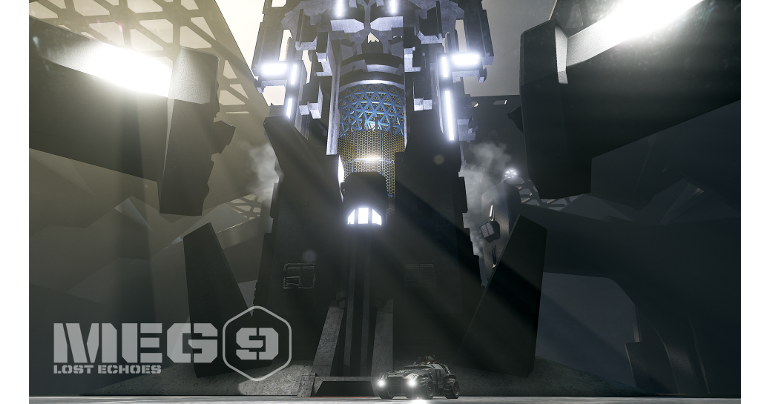 Although buoyed by famous friends and boosted by Unreal, Skunkwerks nevertheless remain a small operation. Art and animation are now working hard to pour personality into their little canine robot - playing on your human weakness for tiny pets. For all of Gibson’s biomechanics and corporate villainy, it’s the metal dog that’ll bring a soul to MEG 9.

“We can’t have two dozen fully-animated human-style characters,” says Brown. “We’re putting it all on MEG.”

MEG 9 has been Steam Greenlit. Unreal Engine 4 is now free.