McDonald’s unveiled “V-Artist” at the 2016 SXSW festival, where attendees had the unique opportunity to step inside a virtual Happy Meal Box and be creative.

This fully immersive and interactive VR experience was created by the McDonald’s global digital team in collaboration with Groove Jones, a VR software and content creation studio, using Unreal Engine 4. The experience premiered at the McDonald’s Loft at the annual Interactive/Music/Film festival held in Austin, Texas.

“Our brand has always stood for convenience and fun, so we set out to offer a glimpse into what the future of fun could look like at McDonald’s through our VR experience at SXSW,” said DeLu Jackson, Corporate VP of Global Digital Engagement. “McDonald’s is always exploring new technologies that can create new ways for consumers to engage with the brand.” 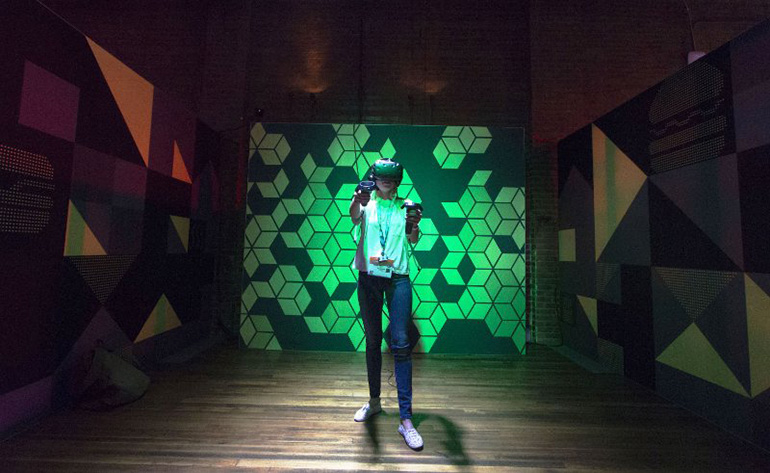 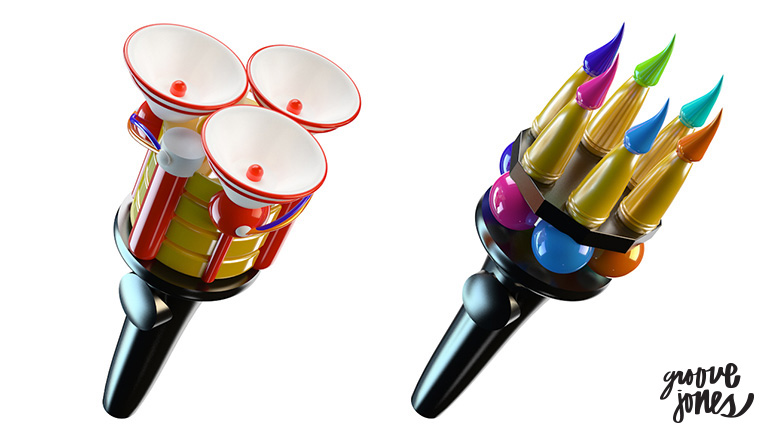 Participants are given two controllers, one of which provides access to several different types of creative tools, including a paintball shooter, a laser-guided color etcher and a paintbrush that allows attendees to paint in 3D space in real time. The other is a palette controller, which gives access to a wide range of colors for users to create with.

The tools allow the players to engage with their surroundings, and the tracking capabilities allow Groove Jones to take advantage of opportunities to draw on spatialization and increase player's spatial immersion. 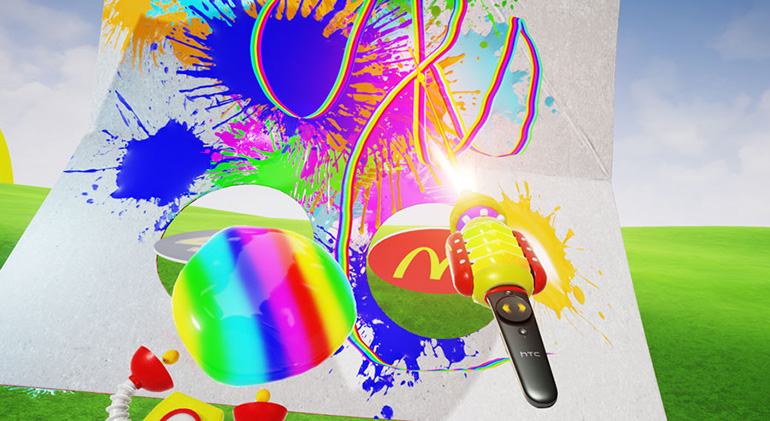 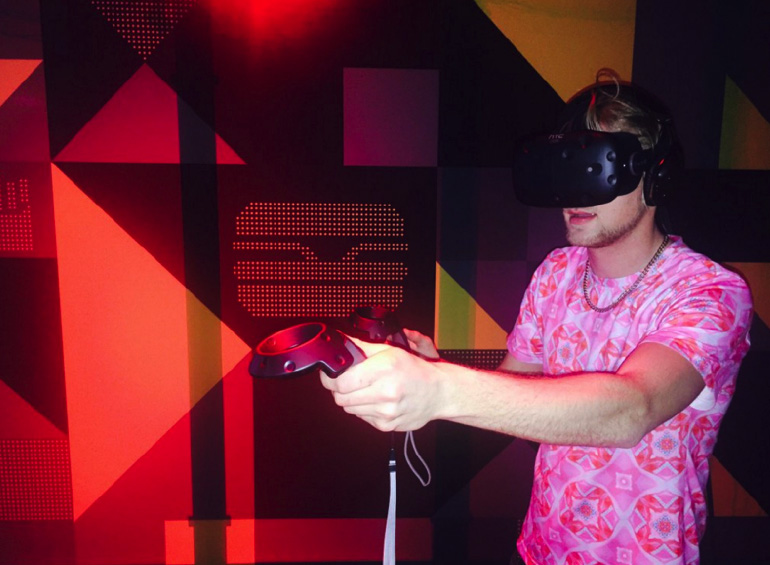 Within the virtual world, there are a variety of experiences to activate and interact with. In addition to creating one-of-a-kind artwork with the paintbrush, players can use the paintball shooter or laser to hit various targets, like shoot butterflies that absorb the palette colors and react to your moves. The power ups that appear throughout the experience also allow players to unlock new features, like rubber walls that reverse what you are shooting at them.

In order to create these interactive art mechanics, Groove Jones drew upon several of Unreal's existing VFX mechanics. By leveraging the flexibility of Blueprint, we were able to use these mechanics in new ways. For example, rather than creating a dynamic spline for our 3D painting, which would have caused tension between poly resolution and draw calls, we instead used an AnimTrail drawn from a set of bones inside the brush. This had the added benefit of being less computationally intensive, but is more accurate to the participant’s drawing path.

At the end of the experience, wearers can share their virtual creations with their friends. Groove Jones integrated components of our “Groove Tech” platform that allows participants to take photos of what they are doing in the VR world and sync them up with cameras that are filming them in real-time. Once they take off the headsets, participants can print the images, share them on their social channels, and have them sent via email and text. Making for a great takeaway memento for the event. 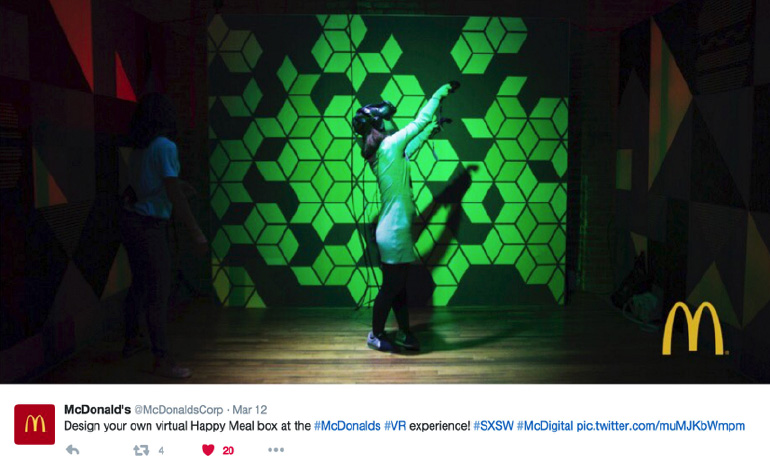 “We wanted to be able to share what people are creating so we made multiple ways for that to happen,” says Dale Carman, ECD at Groove Jones. “Not only can you share what you create in VR to your social channels, but we also are showcasing the works of art at the McDonald Loft experience on large screens and people can print them out to take with them. We covered every option.”

The SXSW activation featuring the V-Artist experience was held in a 3,000 square-foot area at the McDonald’s Loft. Two Lighthouse sensors within each of the three 15x15 foot room-scale pods tracked player position, allowing wearers to walk around and explore the virtual world using HTC Vive room-scale technology. Cameras were placed above the room-scale pods to capture what the participants were doing in real time. 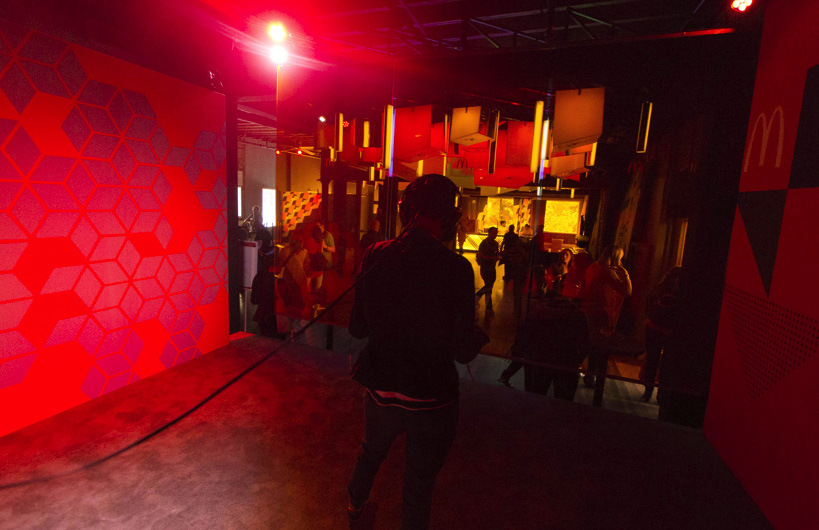 The experience was created for all ages with the goal of producing a fun time for all. Once you get the opportunity to actually walk around inside the art that you are making and move through your brush strokes, everyone walks away smiling! 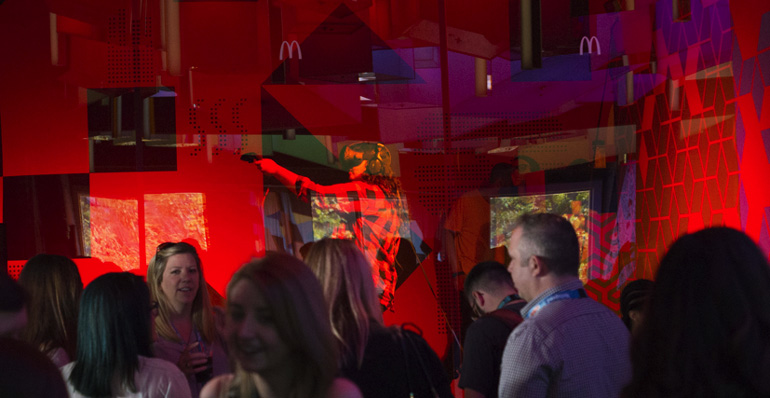