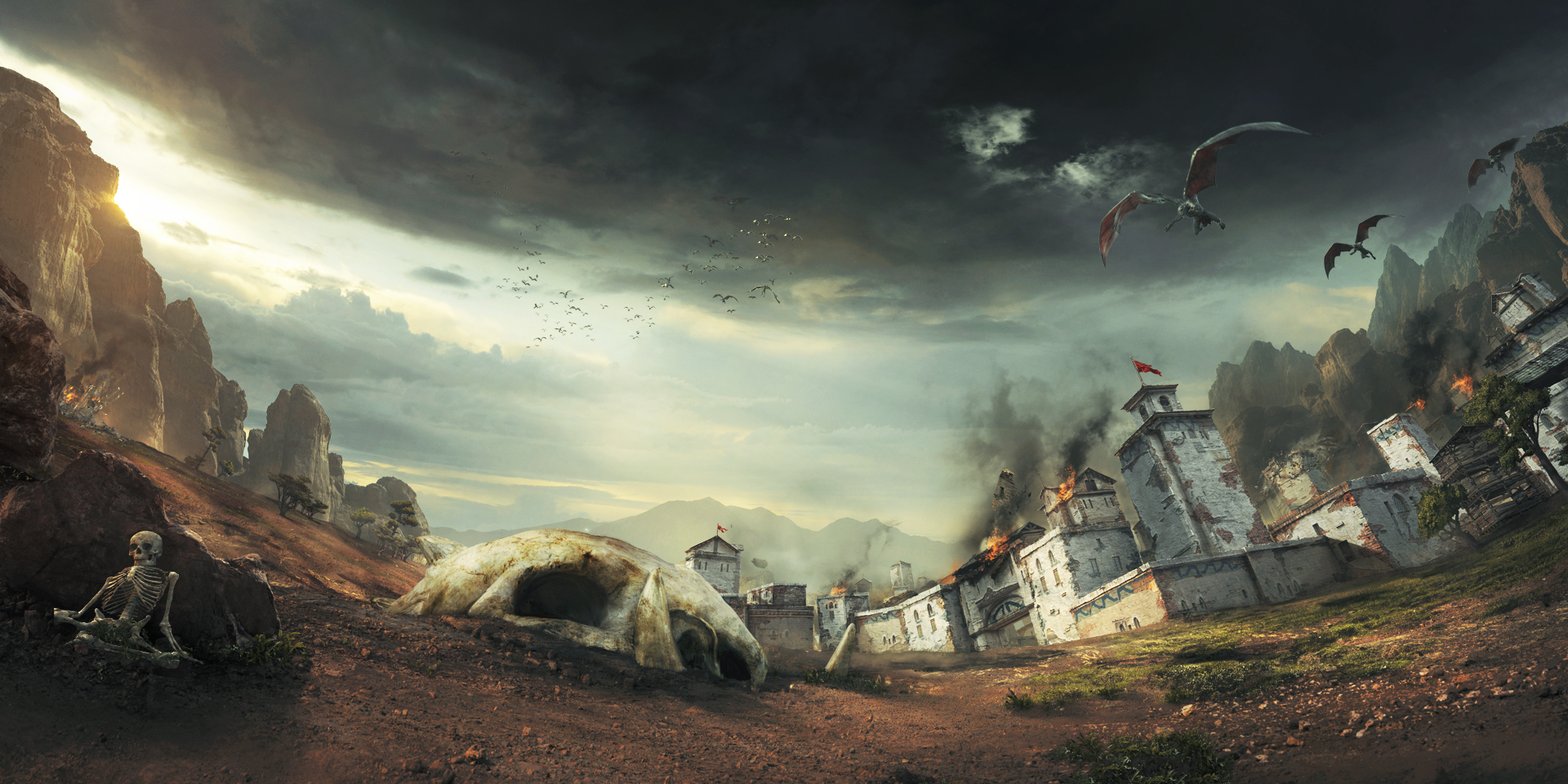 Extinction. The elimination of a species from existence. In Iron Galaxy’s upcoming Extinction, humanity is on the endangered species list as they struggle to survive against the enormous and bloodthirsty Ravenii. Their last line of defense is a solitary warrior, a Sentinel named Avil who accepts the weight onto his shoulders with a solemn conviction. This will not be humanity’s last stand.

Iron Galaxy has long been a force in the industry working on a multitude of ports over the years but really came into their own when they began creating and publishing their own titles. Perhaps their most notable project has been Killer Instinct on Xbox One, which is held in very high regard among the fighting game community.

Using their knowledge of nimble controls and fast-as-lightning reaction time, they bring many of those core fighting game mechanics to Extinction. Players are rewarded for their skills as they progress through the game with ever increasing challenges awaiting them at every turn.

So, what will it take to survive against the Ravenii and how did the team at Iron Galaxy use Unreal Engine 4 to bring their vision into reality? We chat with five members of the dev team to talk severing ogre limbs and bringing this fully destructible world to life.

How did the experience of the Iron Galaxy team benefit in the development of Extinction? Does the strong background in fighting games (ie: Killer Instinct) show its fingerprints in Extinction’s gameplay?

Kurt Tillmanns, Lead Designer: Our work on previous action titles aided us a lot and our collective taste in fast, skill-based games is prevalent in decisions we made while designing Extinction. As developers, it’s important to build on those experiences because you can hone your existing skill set while also taking on new challenges, and Extinction provided a lot of brand new challenges for us. Unlike other games with large enemies, there is no golden path to defeating the Ravenii. The player can approach them from any angle, any limb. The Ravenii have to be able to react to every one of those player decisions and pose a threat at a fast pace that we haven’t seen against enemies of this size.

Where did the idea for Extinction originate? Can you tell us about any other games that inspired you on this title?

Kraig Kujawa, Executive Producer: The initial ‘David vs Goliath’ idea and fiction came from our initial discussions with Maximum Games, who are huge fans of fighting games, just like we are. We were inspired, obviously, by the scale of Shadow of the Colossus and Attack on Titan, but our combat is inspired by fighting games. Thru Divekick, Killer Instinct, and our Midway Games background, that’s our heritage. We were fascinated by trying to mesh the two into something cool. 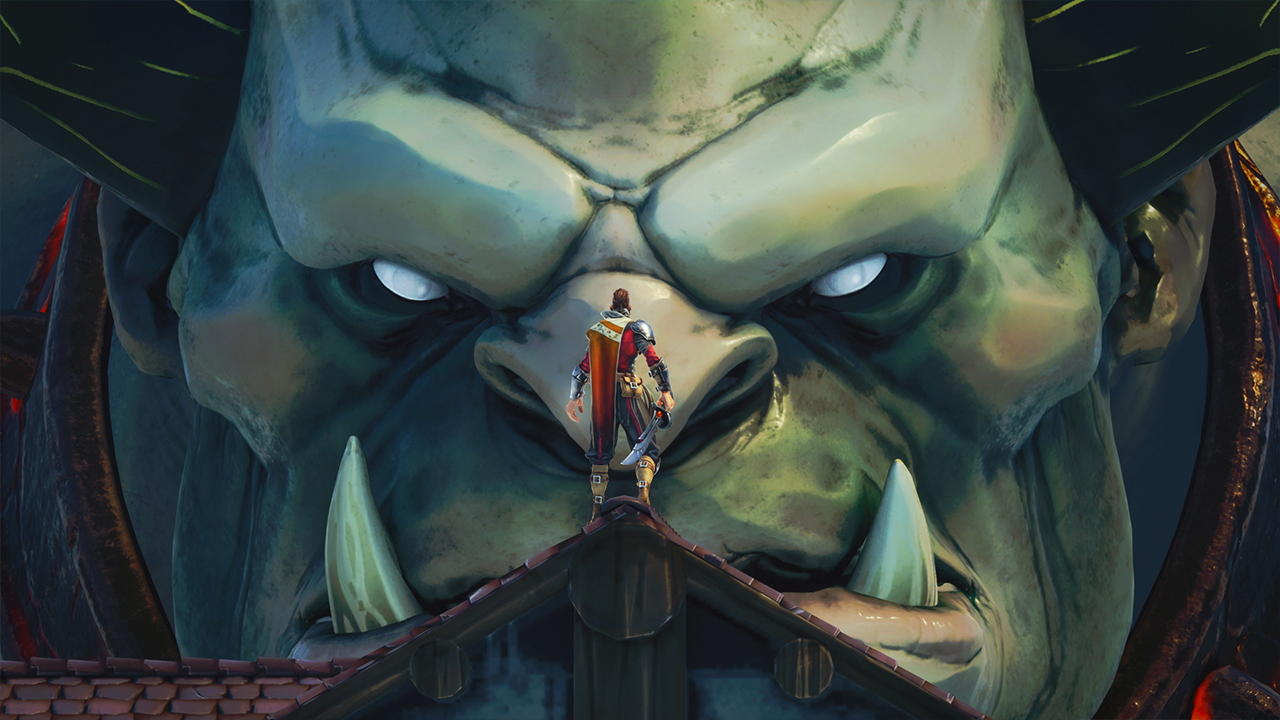 Extinction has an interesting background story leading up to when the game takes place. Tell us a bit about the history that leads humankind to such devastation.

Derek Neal, Executive Producer: The Ravenii are an old threat, long since thought vanquished, that have since resurfaced. In times long ago, the order of people who originally drove the Ravenii away was known as the Sentinels. However, in the absence of the threat, the Sentinel order slowly faded away, and mankind forgot their ancient enemy. Kingdoms rose and fell, and instead of fighting monsters, people began fighting each other. This created a bloody and war-torn world, which was ill-equipped for the Ravenii’s return. 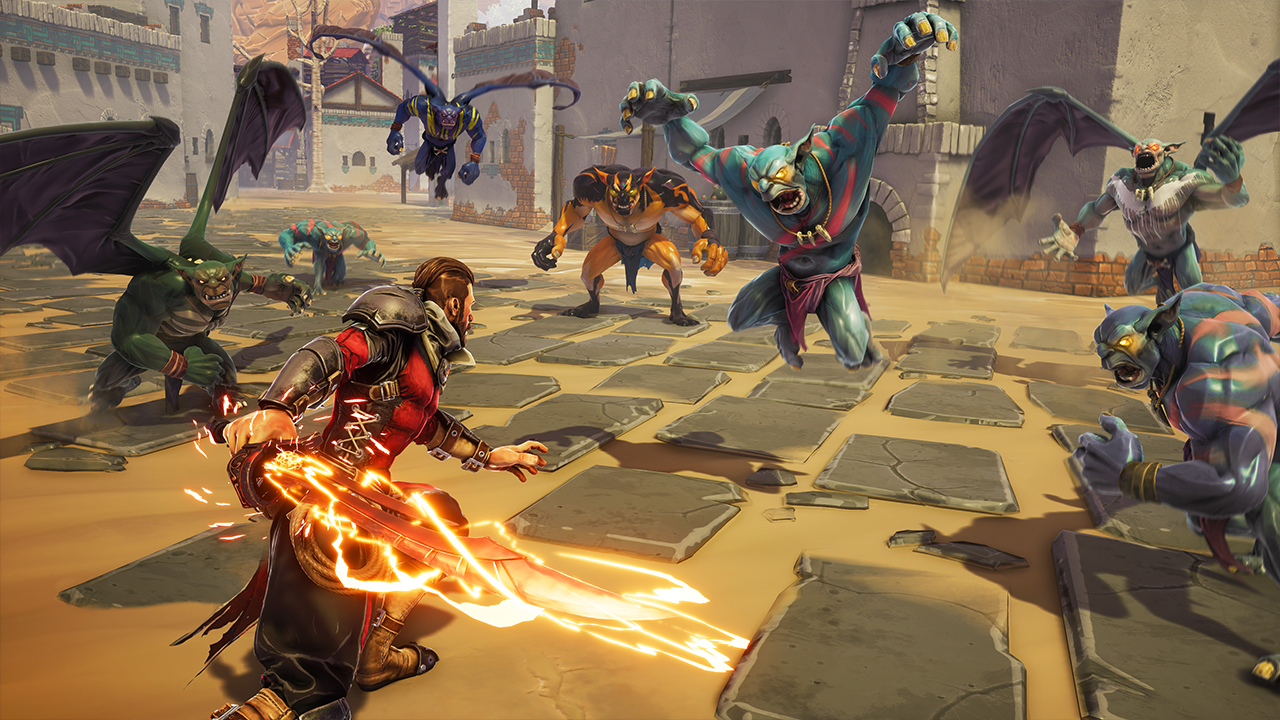 Avil is the last of the Sentinels, the last line of defense against the Ravenii; How did he get here? How is he the last of his kind?

Derek Neal, Executive Producer: Avil was originally a human soldier, but he was captured and forced into a slave camp. He is freed when the Ravenii attack the country that was holding him, shattering the slave camp in the process. Instead of running, he is one of the few that takes up arms to fight. This doesn’t go well, but thankfully he is saved by a mysterious figure, who takes him in and begins teaching him the lost arts. 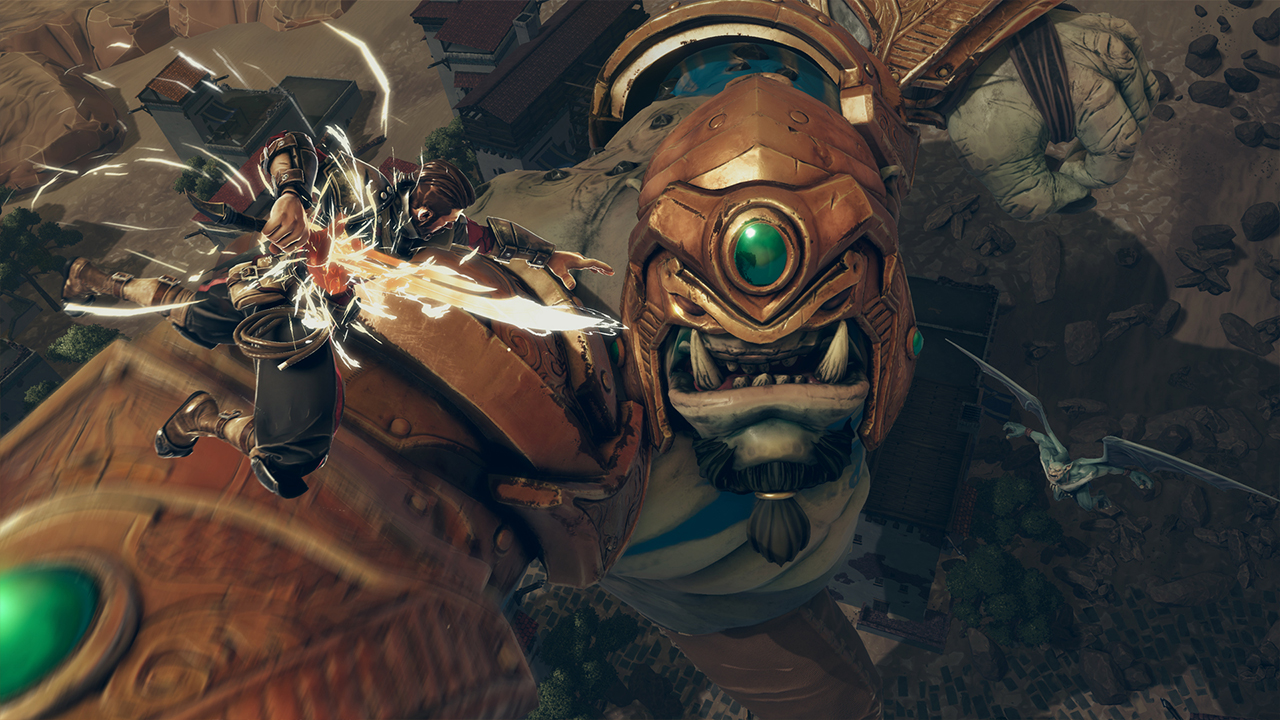 The combat in Extinction is highly skill based. Were you able to find a balance between difficulty and ease of play for more casual or less skilled players?

Kurt Tillmanns, Lead Designer: We did a lot of playtesting to find the right balance between accessibility and skill and we’re proud of the end result. If you challenge people in just the right way, they understand that there is depth to your game and are driven forward by the promise of mastering that depth, but if you don’t challenge people enough they get bored. Extinction’s combat is skill based, but it’s also about the decisions the player makes in-between those combat moments - whether to defend the city from an oncoming Ravenii, save a group of civilians, or take out the nearest horde of Jackals. As players get better at mastering the combat, these strategic decisions carry more weight. 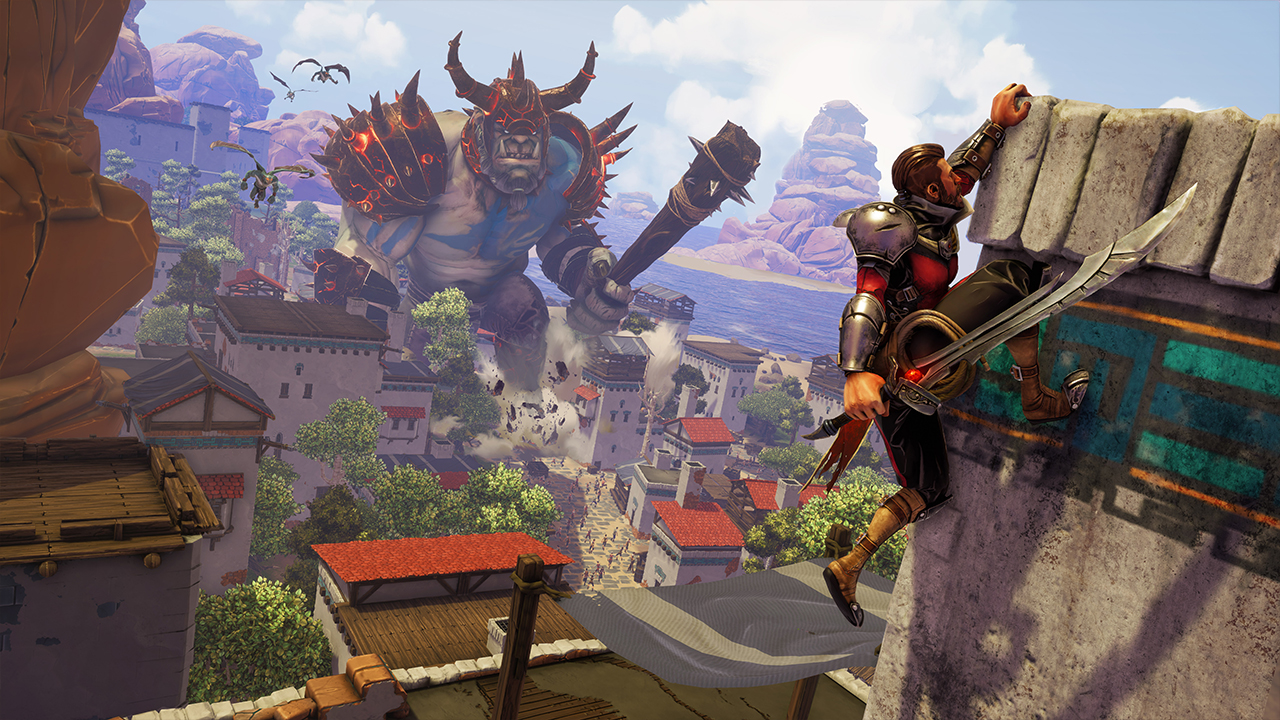 Traversal is the name of the game in Extinction with Avil being able to scale buildings (and Ravenii!) almost at will. How did the Unreal Engine help you refine such a high speed and intricate mechanic?

Kraig Kujawa, Executive Producer: We love Unreal Engine. Many of us at Iron Galaxy have worked on versions of Unreal Engine for 15 years or more, and I got started making mods for Unreal Engine 2. Having a team with expertise in Unreal gives us a shared knowledge base and a shared tool base that eliminates the need to solve some very complex problems when developing a full-featured game like Extinction. It allows us to focus on making the game fun! 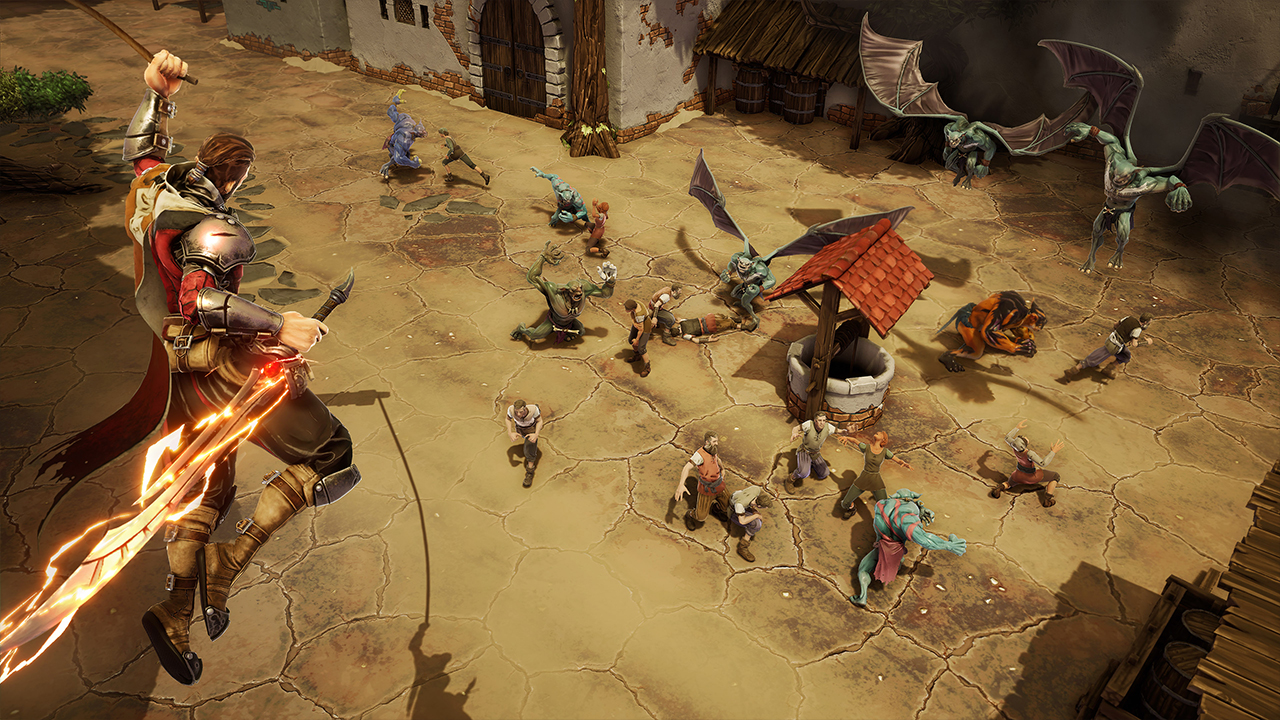 Extinction boasts a fully destructible environment. How challenging was it to make all that chaos work together in-game?

Kraig Kujawa, Executive Producer: It wasn’t as much of a challenge as you might think because destructible environments was something we knew we wanted very early on in development. It was also one of the very first features we implemented in the game so the team was used to developing missions, challenges and AI around all the destruction.

Extinction was revealed just before E3 2017. Since that time have you received any feedback from fans based on what they've seen? Did you use any of that feedback to change the game going further?

Kraig Kujawa, Executive Producer: The feedback was amazing and the team was ecstatic to see their hard work so widely appreciated. Fan feedback is crucial for letting us know if we are on the right track. Once we saw that the work we showed got a great response, we were excited to make sure all of the features we didn’t show would make people just as excited!

What was your main motivation for choosing Unreal Engine 4 as the platform for Extinction?

Mike O’Connor, Lead Engineer: Familiarity was a huge deal. Many of the team members have extensive prior experience with Unreal Engine 3 and have used Unreal Engine 4 in both internal prototypes and personal projects prior to Extinction. That level of experience allowed us to start prototyping features right away, without having to spend too much time learning our way around. 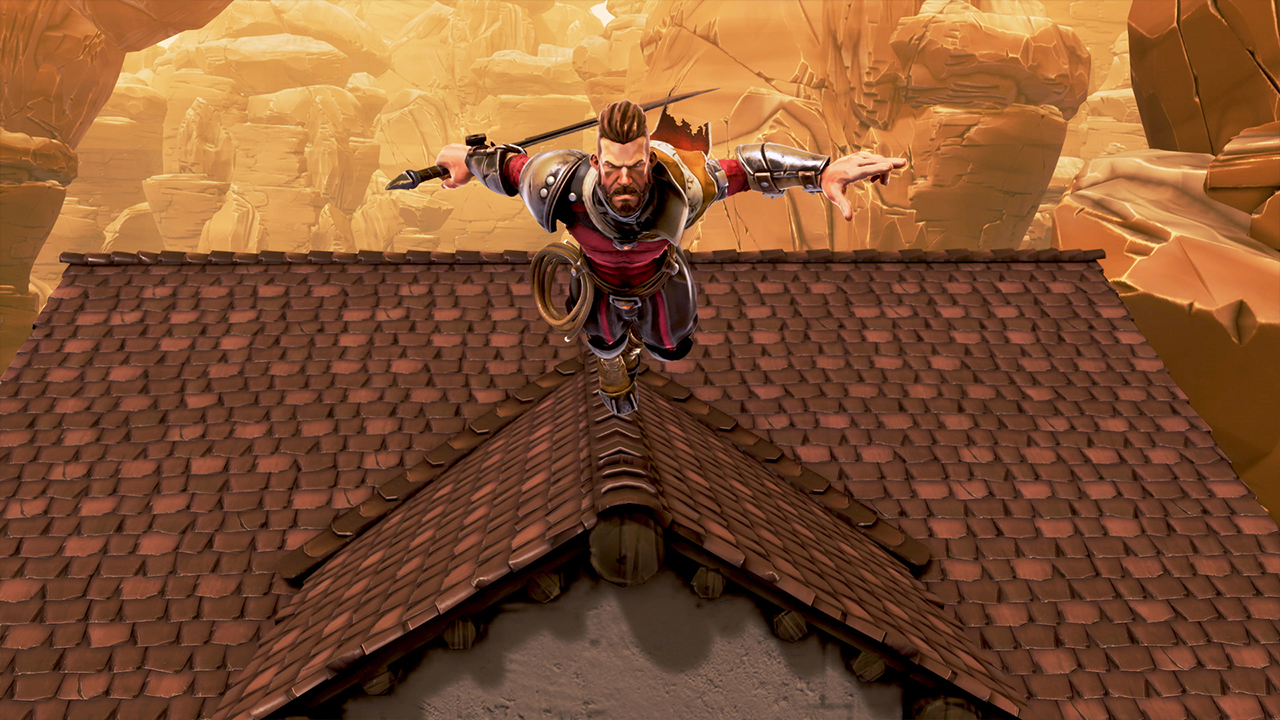 Tell us about a favorite tool or feature of Unreal Engine 4 and how it aided you in development.

Kurt Tillmanns, Lead Designer: There are so many to choose from! Blueprint has been a huge addition to the engine that has empowered our content team to take ownership of features in ways they couldn’t before and take some of that overhead off of engineering, who get more time to work on our “larger scale” features.

Where can people go to find out more about Extinction?

People can check us out at www.extinction.com or feel free to hit us up on Twitter (@IToTheG)! Also be sure to check out the game’s official Steam Page!