Hi everyone, my name is Harry Corr and I am the Art Director and Level Designer at Toxic Games studio in the United Kingdom. With the upcoming release of our new puzzle adventure game and sequel, Q.U.B.E. 2, I’m excited to finally be able to describe our team’s experience using Unreal Engine 4 to develop and ship a multi-platform game. 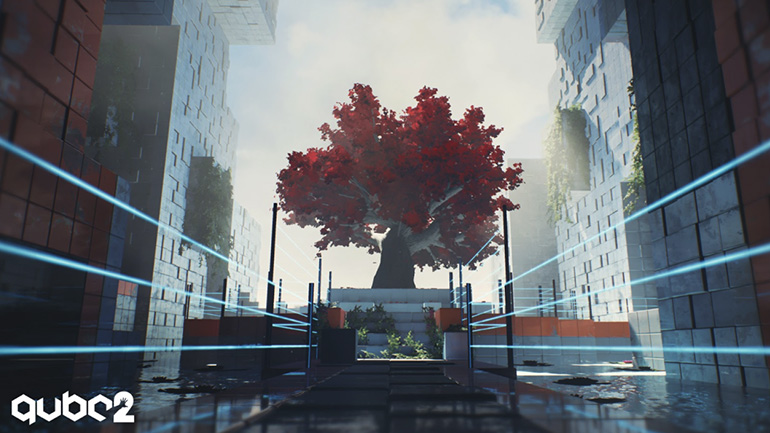 The Oasis Scene in Q.U.B.E. 2 which introduces a natural element into the environment.

This was both my first time working in the role of director and my first time using Unreal on a full production. The art team on Q.U.B.E. 2 consisted of just myself and a talented junior artist named Connor Stanley. As you can imagine with a small team, there were times during development where the amount of elements we had to work on felt overwhelming: level design; lighting; materials; particles; set-pieces; gameplay; performance; UI. There were a whole range of different features which the game required that we were lacking experience with. However, ultimately nothing proved to be insurmountable largely thanks to Unreal’s superbly designed interface and user-friendly tools.

The ‘Baptism by Fire’ approach to learning the engine during active development was made significantly easier by the absolutely incredible amount of free Unreal content available online. The online community provided so much invaluable support and information which made learning the tools a relatively quick and easy process. I think it’s also great to see so many other creators sharing their work and techniques online, and being able to actually engage with them on their process. This would often inspire us to try something we may never have considered otherwise. 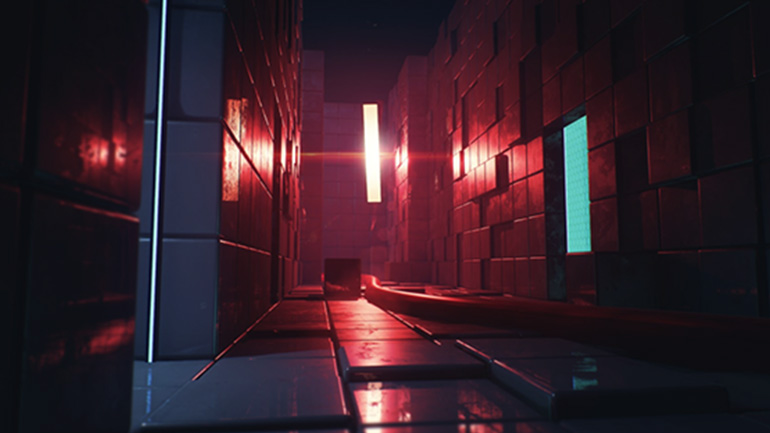 A corridor in the Industrial environment which showcases the lighting and reflections.

Early on in development, a key decision was made to maintain the minimalist aesthetic and cube structure of the original game. We didn’t want to alienate fans of the first game just for the sake of a new and advanced style and so Unreal Engine 4 became the biggest driving factor in evolving the visual style beyond the game’s predecessor. We looked at the engine’s strengths, which is undoubtedly lighting and materials, utilising these elements to push the original game’s art style as far as possible.

With a small art team and around 5-7 hours worth of environments to build, we decided to keep the unique asset count to an absolute minimum and focus our time on making the geometry of each room feel organic and bespoke. We drew inspiration from the excellent shape and lighting designs of sci-fi artists, such as John Harris and Nicolas Bouvier, to create the organic, architectural style of the towering QUBE structure the game takes place in. Using this approach, we managed to make every room feel unique and interesting, something which I’m super pleased with considering all of the rooms have been created with a very small number of unique assets. 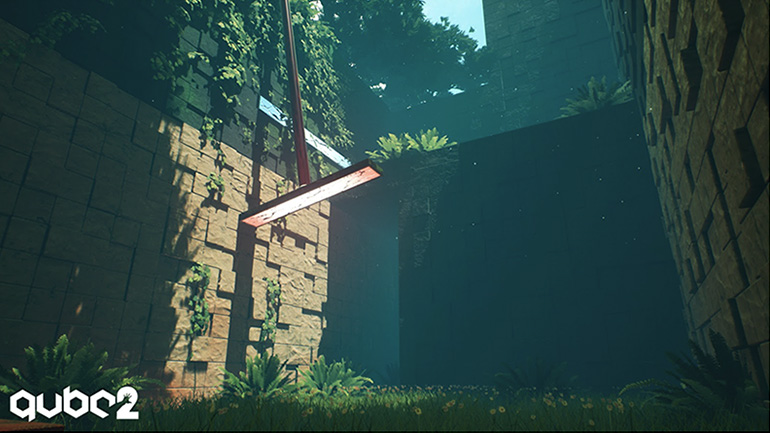 We introduced a diverse range of environments in the sequel.

In contrast to the prequel, there are several different areas in Q.U.B.E. 2 that the player will visit. To make these areas visually distinctive without creating entirely new environment assets, we created bespoke materials, colour palettes and lighting styles that gave each area its own distinctive characteristics and would also reinforce how we wanted the player to feel at a particular time. For example, in the beginning of the game we wanted the player to feel anxious, lost and curious about their situation and the environment they have found themselves in. To induce these feelings, we applied a cold metallic material to the environment and lit all of the rooms with dramatic red spotlights which left much of the environment in shadows.

Following this area, once the player is comfortable with the game’s mechanics and narrative, we change the environment to a far brighter area. This environment is comprised of large open spaces built from clean white cubes and lit by warm sunlight to influence a positive feeling in the player. So although both of these areas were created with identical assets, they feel very different from one another. 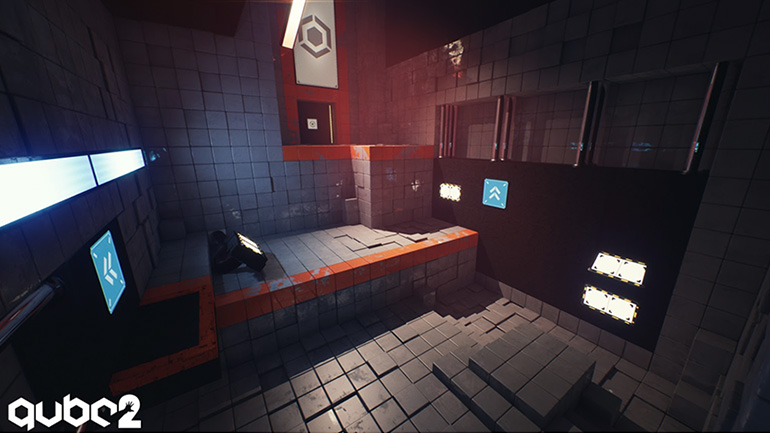 Above: The Industrial Environment showcasing the cold, metallic materials.

Below: The Minimalist Environment showcasing the clean, white cubes. 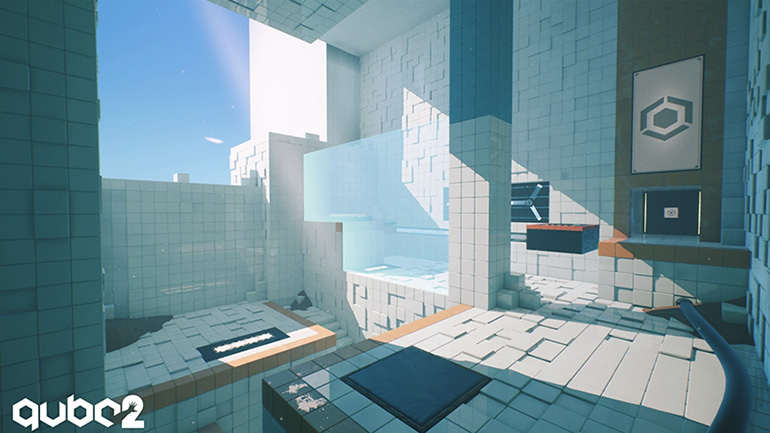 In terms of our process for creating the environments, it was quite straightforward. Our puzzle designer, Dave Hall, had designed all of the puzzles in empty square rooms connected in a straight line. When he was happy with all of the puzzles in a level, we would take those rooms and rebuild everything that surrounded the puzzle gameplay elements. Now, this wasn’t simply a case of building whatever looked the coolest. Obviously, the player’s experience is paramount so it was always the first thing to be considered: a room can’t look so crazy and organic that the player struggles to make sense of the space, adding unnecessary difficulty onto the already challenging puzzles. Similarly, when we light a room we can’t make it so dramatic that it’s difficult to actually see all of the puzzle elements. Accordingly, we tried to maintain a balance between what looks good and what is actually fun to play. 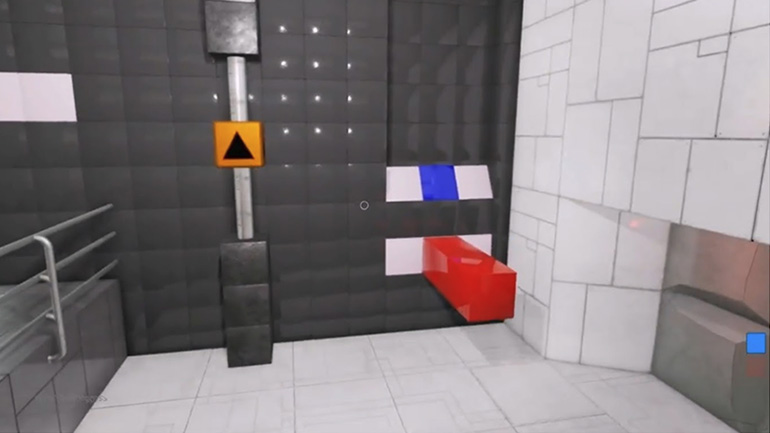 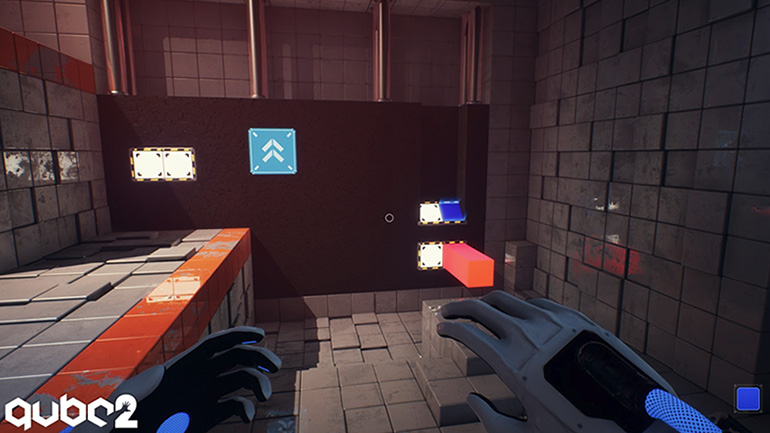 A comparison between the basic puzzle design and the resulting environment. 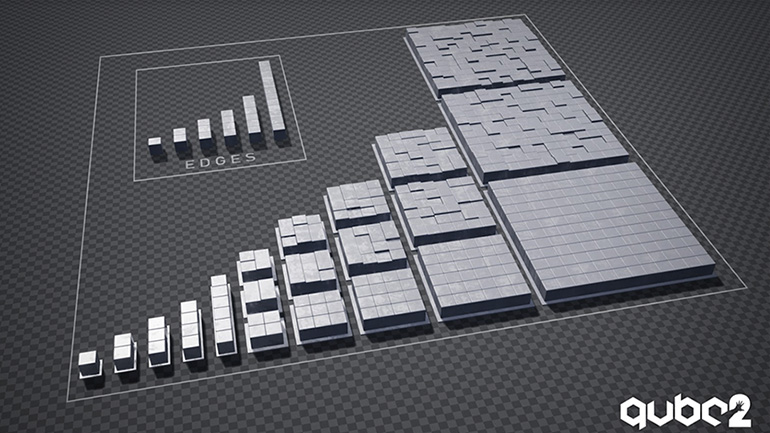 The modular kit used to construct all of the game’s environments.

Every environment in the game is constructed from a modular set of pieces. To achieve the appearance of uneven surfaces each piece has two variations with cubes extruded at different levels. When we first begin working on a puzzle room, we take the whitebox and rebuild the level’s geometry using simple boxes followed by a very quick lighting pass. We continue to iterate this stage until the room offers a comfortable playing experience and the overall shape and composition of the room looks good. Once we’re happy, we then replace the boxes with pieces from the modular kit. Unfortunately, as our team lacks a tools programmer, we had no way of automating the placement of these parts which meant everything had to be placed by hand. This proved to be very time consuming but ultimately, it’s worth it. When all of the pieces are in place, we then add additional ‘dress’ assets (light panels, sand buildup, foliage etc) before finishing the level with a lighting pass.

Moving on to the Unreal Marketplace, I was initially somewhat sceptical about how useful the Marketplace would be but it ultimately turned out to be hugely helpful, particularly for the creation of particles. In the beginning neither myself or Connor had much experience with creating particles and so the Marketplace proved to be invaluable. For example, Polysplendor’s ‘Pyro Particle Texture Pack v1’ and Tharlevfx’s ‘VFX Weather Pack’ gave us a great starting point for the game’s fire and lightning effects respectively. Even if many of the assets from the store required modification to get them working or performing correctly for our needs, it saved us so much development time to have a quality base asset to work and learn from. 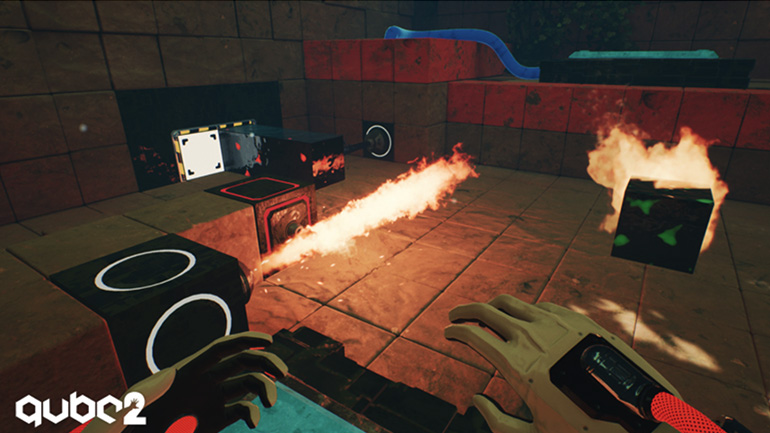 So after a lot of hard work, learning and perseverance, our team has managed to deliver a great looking game that we are all exceptionally proud of. I don’t believe our team could have achieved the level of quality we have with any other engine. The quality, ease of use and power of the tools Unreal provides have enabled our team to focus on building a fun and engaging puzzle adventure game.

Thank you so much for reading! If you want to see more, you can watch our Official Gameplay Trailer which will give you an idea of what to expect when Q.U.B.E. 2 launches this year on PC, PlayStation 4 and Xbox One. For more information, visit our website.