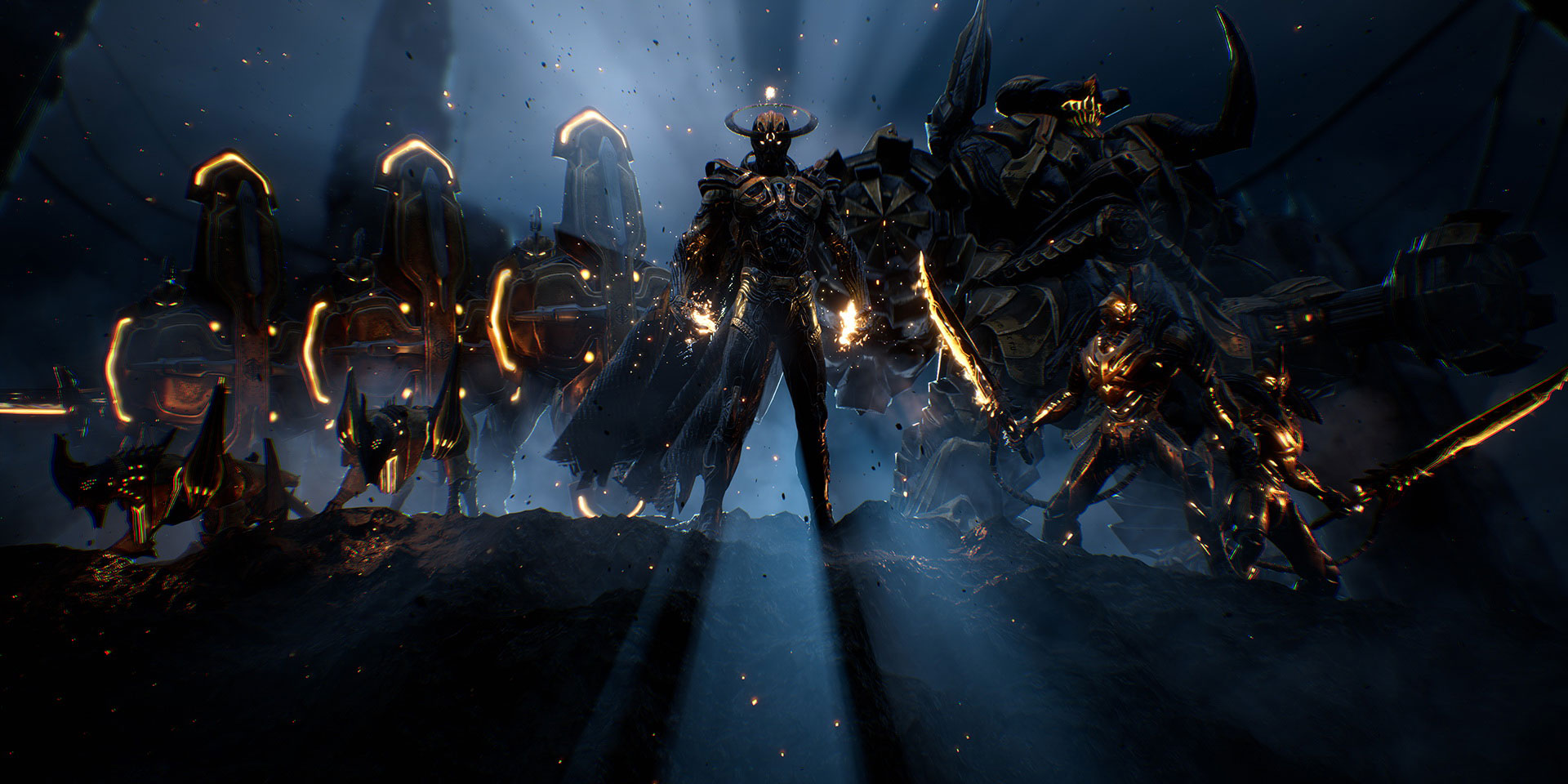 With a list of production credits that includes the Unreal Tournament and Gears of War series, the team at Laser Guided Games is no stranger to working with Unreal Engine. For their next project, Golem Gates, they are collaborating with Hollow Earth; a team whose background includes game development as well as design work for the Transformers and Marvel movies.

As with any CCG, deck building is critical component of Golem Gates, but accumulating powerful Glyphs is only half the battle. A skilled player must also know how and when to use their Glyphs most effectively while also anticipating the actions of their opponents as they fight over key objectives.

Tell us about your individual backgrounds in digital entertainment.

Matt Oelfke, Lead Programmer and Lead Designer - I first got into the game industry working on mods for Unreal Tournament 2003, eventually getting a contract at Epic and then becoming a full-time employee. I worked there for over nine years on Unreal Tournament, Gears of War, and Unreal Engine’s multiplayer infrastructure. After a long time working on AAA titles I left to start Laser Guided Games so that I could try out new ideas on an indie scale. After developing a small shoot-'em-up to get a handle on things, it was time to go a bit bigger.

Rob McLaughlin, Programmer and Designer - I’ve been working on video games for almost 18 years across almost every genre and shipped over 20 games. After working on sports titles and high-profile strategy games such as Civilization IV and Pirates with legendary designer Sid Meier at Firaxis Games, I moved on to Epic Games. While at Epic, I was a core programmer for the entire Gears of War franchise, as well as Unreal Tournament and other miscellaneous titles. After many years at Epic Games, I moved on to the indie scene and eventually joined my long-time friend Matt in ramping up his company to work on our own games here at Laser Guided Games.

Josh Nizzi, Art and Story Lead - I worked in games for about eight years on titles like Red Faction 1 & 2, The Punisher, and Fracture. Following that, I moved onto feature film concept design for the next 10 years or so designing superheroes and robots for Transformers and Marvel movies. I never fully left games though, continuing to do contract work for companies like Epic and Warner Bros. as well as developing my own ideas through Hollow Earth.

Dalvin Kang, Audio and Campaign Design - I’ve worked for Hollow Earth for about 4 years, spending most of my time producing music, designing audio and gameplay prototypes for various IP’s.

How did this collaboration between Laser Guided Games and Hollow Earth Inc. come to fruition?

Rob McLaughlin -  As a fairly well-networked industry veteran, it was my responsibility to go out and find some art and level design talent, preferably in the area of Raleigh, NC. After chatting with a few independent game industry friends of mine, Josh Nizzi was introduced to me via email. We met for lunch and hit it off immediately. Not only was he interested in doing the work, he had been searching to join up with some trustworthy programming veterans so he could re-enter the gaming world on a full-time basis.

This worked out perfectly, because instead of just finding an art contractor, I found an entire partnership. It also turned out that our daughters ended up on the same high school volleyball team a few days later. We discovered many family parallels over the next few months and it was like the collaboration was almost meant to be. 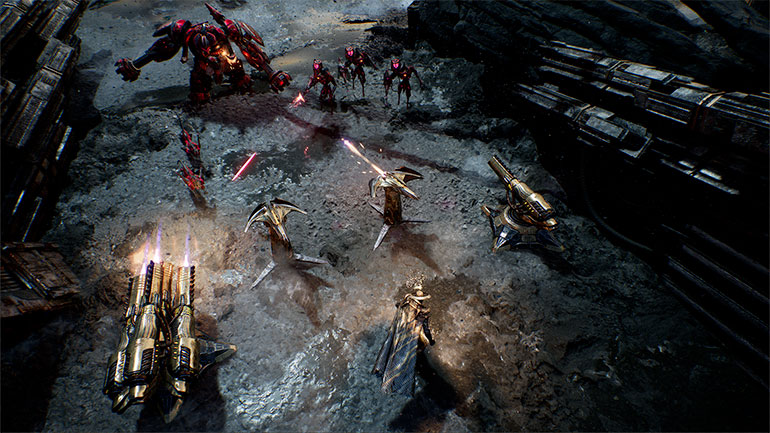 What was the initial inspiration for Golem Gates?

Matt Oelfke - I have always enjoyed CCG-style games where you build up your collection slowly over time. Figuring out how each new piece can be integrated into existing decks or become a starting point for a new one is very fun. Unfortunately, with so many of those types of games being free-to-play now, the progression is distorted too much to make that really work for me.

Starting with the collectible base, we then looked at a few genres to see what would both be unique and would accentuate the deckbuilding aspect. An RTS seemed like a great choice, as the combat strategy and deck strategy can inform each other to create a lot of unique combinations. Additionally, we can move some of the mechanics of many existing RTS games - like build orders - into the deckbuilding aspect to focus the combat and make it more accessible.

The combination of RTS and CCG is certainly interesting. Can you give us a general overview of gameplay?

Matt Oelfke - The objective of most maps is to defeat the enemy Harbingers while defending your own. Your Harbinger can move freely, summon cheap scout units and provides buffs when Glyphs are used nearby, but is almost impossible to heal so it’s best used as a backline commander. Players draw six Glyphs at the start of the game and draw more on a timer as long as their Harbinger is not moving. Their energy for playing Glyphs regenerates over time and its capacity expands over time depending on how many resource points the player controls.

The most critical element of building and placing pieces is that new Glyphs can be targeted almost anywhere you have vision from existing units and buildings. Send an army in and they’re overmatched? You can summon more right on the spot. Often an engagement will have multiple beats of one player using spells or summoning more units followed by the other player responding with some of their own. Buildings and traps construct automatically over time, so it’s even possible to try to sneak structures onto an active battlefield and lead the enemy into them. 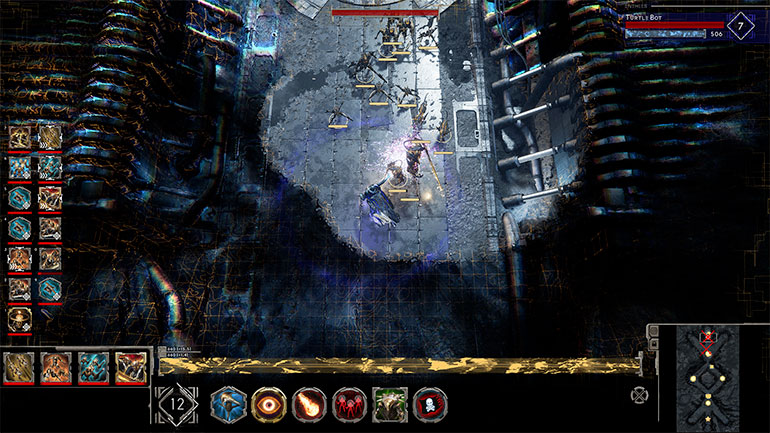 What can you tell us about some of the different Glyph types?

Dalvin Kang - The Glyphs are divided into four different categories: units, structures, spells, and traps. Units and structures are core to controlling the battlefield. They have a variety of attack types and special abilities. More importantly, they give you clear vision through the fog of war. Since you can forge Glyphs anywhere you have clear vision, units and structures can be used both offensively and defensively.

Spell Glyphs are used to directly affect the battlefield. They can do anything from setting groups of enemies on fire, to giving units super strength, to teleporting your Harbinger across the map. Trap Glyphs are placed on the battlefield and triggered by the enemy. Some examples include poison traps, explosive mines and stun traps.

Balancing these four different Glyph types when assembling your Glyph Book, as well as understanding the interplay between the four categories is key to success when playing Golem Gates.

How do players get new Glyphs and how might their choices affect playstyles?

Matt Oelfke - In the campaign, new Glyphs are awarded for completing map objectives. Completing the campaign will give the player a number of predictable, well-rounded options from which to expand. In other modes, new Glyphs are awarded randomly at the end of a match regardless of the outcome. Single-count Legendaries are the exception. Each is linked to both a single-player and multiplayer achievement. Complete either to get the Glyph; complete both to get a visual upgrade.

The Glyphs that players choose are important expressions of their strategy. A rush player will want to choose lower cost units, buffs, and perhaps some utilities that temporarily increase their resources. Turtle players will stock up on buildings and traps, using long range effects to create openings over time. There are also ample opportunities for misdirection - aside from stealth units, there are also Glyphs that will generate temporary holographic units that can be used to fake out opponents. 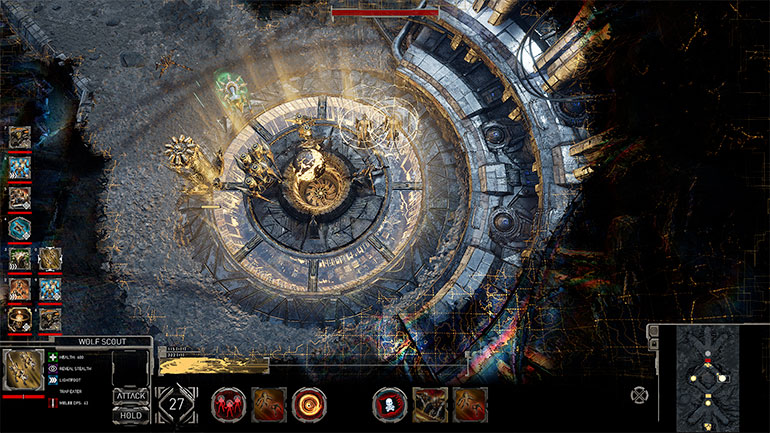 Did you encounter any unexpected challenges in combining the two genres?

Matt Oelfke - Resource mechanics were the biggest challenge in the core mechanics. We wanted resource control to be a primary objective towards winning the game, but we also wanted to enforce a build-up over time to prevent players from bringing out their big forces too early. We made resource capacity a separate value that increases much more slowly to handle that, but found it’s a little unintuitive in an RTS. To help with that, and also avoid gathering units, we made the resource nodes King-of-the-Hill-style capture points, which makes things simpler to understand because it’s easy to tell if you’re winning the resource game even if you don’t know the specifics of resource growth.

What were some of your goals and inspirations surrounding the visual design of Golem Gates?

Josh Nizzi - Looking at potential competition, there appeared to be a trend toward more stylized and cartoony designs. To stand out, I thought we should go for a darker, more mysterious world.  I felt this direction would also complement our fog of war, which is key to our gameplay. We are all fans of Dark Souls and Bloodborne, so selling the idea of this type of look wasn’t hard.

Another key factor when deciding on the visual direction was production reality. I’m the only artist on the project and there is only so much I can do in a year, even with the help of contractors and the Unreal Marketplace. I thought it wise stay in my wheelhouse designing things I know I can produce proficiently. 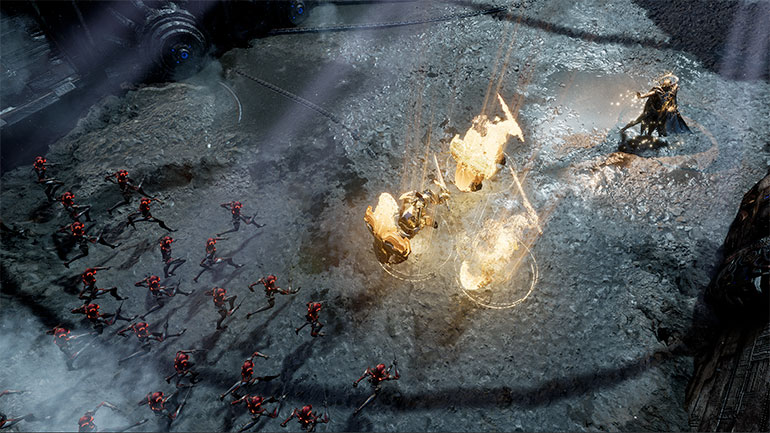 Obviously, the team has had considerable experience with Unreal Engine. How has that experience changed operating as a smaller, independent studio?

Rob McLaughlin - It really hasn’t changed anything to be honest. Matt and I have been working with Unreal Engine for so long that we already know how to design and create a workflow that would optimally suit any size team. The combination of the engine and our experience allows us to perform our programming and design tasks as efficiently as a full-sized team would. Josh and Dalvin took to the editor fairly easily, allowing Matt and me to expose features from our code to allow them to be as efficient as possible so we can add content to the game without slowdown. If you know what you’re doing, you can do amazing things with Unreal Engine 4 with very few people.

Do you have any advice for other independent studios considering Unreal Engine 4 for the first time?

Dalvin Kang - In my experience, the most helpful thing that Unreal Engine 4 offers is the ability to quickly mockup gameplay ideas through Blueprints. We’re a small team and we need to work fast, so being able to quickly sketch an idea and test it is extremely helpful. When you’re constantly working at a fast pace, accessibility is important. Epic also has great online resources for developers who are new to Unreal Engine. More specifically, Unreal’s AnswerHub is a great resource when you run into problems. The community on there is especially responsive and eager to help you out. 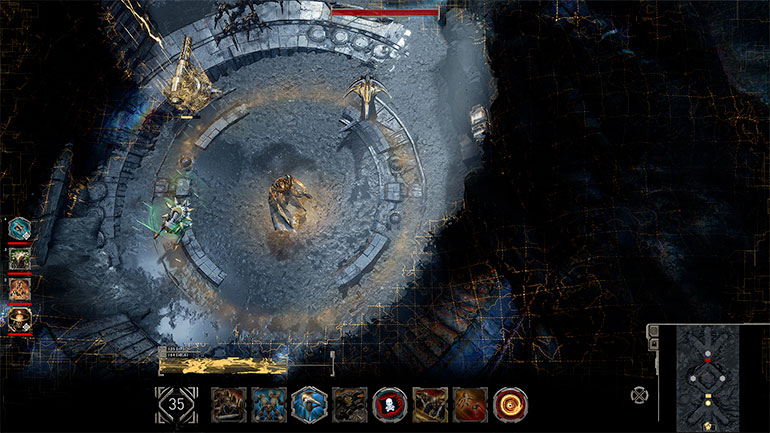 Where should people go to get more information and stay up-to-date with development?