Extracting Raw Data: How Survios Is Using VR To Change The Action Game

EDITOR'S NOTE (Sept. 2016): Raw Data has become the first VR title to generate $1 million in one month. This follows recent news that Raw Data is the first VR release to hit #1 on Steam. Congratulations to the team at Survios! For more information on the game, visit the offical website.

How is virtual reality changing the game? We know that it's important and we know that it's here, but how are the experiences we have in VR moving us forward as both creators and consumers?

This question is on many a mind these days as developers seek to utilize this new-found format to forge new opportunities and deliver original experiences that simply weren't possible before. For many, the action shooter gaming genre is one obvious area where we might see an immediate impact. After all, the popularity and success of the FPS genre means that there's a substantial market to provide content to while producing the progress that the medium of VR itself seems to invite.

Well, I recently had the chance to catch up with Survios, the creators of the Raw Data, a high-octane co-op VR gameplay experience that seeks to engage your body while igniting your imagination. The answers to my questions come as a collaborative effort from CCO James Iliff, head of studio Chris Hewish and game director Mike McTyre as we discuss the evolution and impact of Raw Data after its recent showing at the 2016 Game Developers Conference. 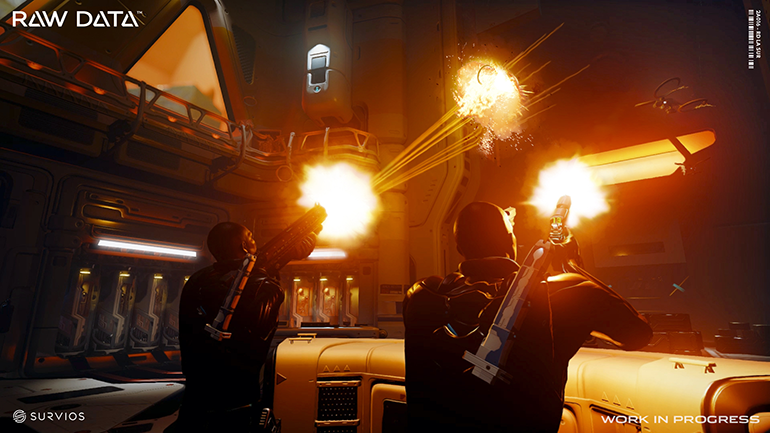 Though early in the VR lifecycle, many current applications focus exclusively on single-player experiences. Why have you pursued co-op and what have been some of the challenges in developing a multiplayer experience in VR?

Survios’ philosophy toward VR has always been that it’s a fantastic social experience and a unique way to play with your friends and connect with new ones, starting with Project Holodeck back in 2012 (whose VR co-op experiences in shared virtual space served as a very early precursor to what Vive and Rift are providing now). Because of the ability to actually perceive players’ body language, facial expression, and hand interactions, virtual reality has the potential to be the most social and least isolating medium of all.

That’s why we opted to develop co-op right off the bat and be among the first to embrace VR as a social platform. It’s the dream of the Holodeck to share these experiences together, and we would have it no other way. Currently, our biggest challenge is making online multiplayer completely seamless for all users, but we’re constantly working on it and improving it, since it’s very important not just for Raw Data and VR games in general, but all future social VR applications.

Though available for multiple platforms, Raw Data utilizes room-scale VR to deliver a brand-new type of experience for players. How does this enhanced scale further immerse the player, or in this case, players?

Active VR gameplay that takes full advantage of room-scale VR is a huge focus for us. We aim to deliver on the promise of VR where users are not just visually immersed in our games but are also physically part of the world. In Raw Data, players utilize room-scale VR in order to rapidly aim and reload powerful guns, swing melee weapons, and hurl projectiles as enemies come at them from all angles in a full 360° game space. Gameplay is enhanced so much when you have to actually reach around your body to grab a weapon and then duck, spin and dodge to avoid enemy fire. People come out of our 15-minute demos feeling like they just did a short workout, but they can’t wait to play again. 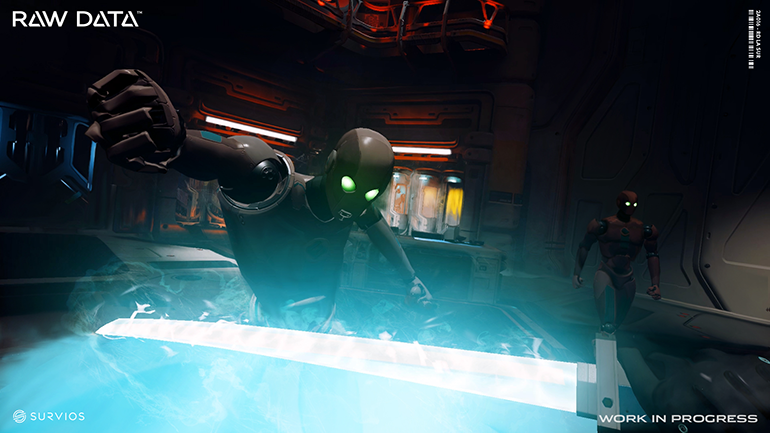 From Unreal Tournament to Halo, Call of Duty and everything in-between, multiplayer shooters have staked a significant claim in the world of interactive entertainment. Do you feel that Raw Data presents a glimpse of the future for this popular genre and, if so, what needs to happen technically before we can get there?

Absolutely. We actually see VR as the next logical evolution of streaming and eSports, and had that in mind when we started developing Raw Data last year. VR is not only a unique take on gaming competitions for the players, but it’s also enjoyable for spectators since part of the fun is watching what the players are doing in real life alongside what’s occurring in the game world. Plus, we’re building out a dynamic third-person spectator mode that will allow viewers to fly around and check out the in-game action from different perspectives, which will make streaming and eSports a lot of fun for both the players and their audience.

The current playable experience has become rather polished, but how has Raw Data evolved throughout its lifespan?

We began developing Raw Data as an action-combat-stealth game using an arsenal of melee weapons, guns and powerups. The first levels we created actually started out as a linear campaign with joystick locomotion, which can be seen in some early YouTube videos. Although the stealth aspects of avoiding cameras and sneaking around enemies were awesome, we decided to take a step back from joystick locomotion for comfort purposes, and refocus our efforts on pure action-combat with bonus player powers.

Since then, Raw Data has evolved into an action experience with tons of abilities and a huge arsenal, with additional turret/trap deployments and nexus defense mechanics. But the physical action is highest priority above all else. We want you to feel like the badass you’ve always wanted to be, in whatever form that takes.That is what this game is all about.

We’re super excited by all the positive feedback the dev team has received from the Raw Data demo, but that’s just what it is: a demo. Believe us - players haven't seen anything yet. While we aren’t ready to show the public all of the exciting components being added to Raw Data for its final release, we can promise a solid combat gameplay experience full of new features, enemies, weapons, powers and much more. Keep tabs on our social channels for sneak peeks as the year progresses. 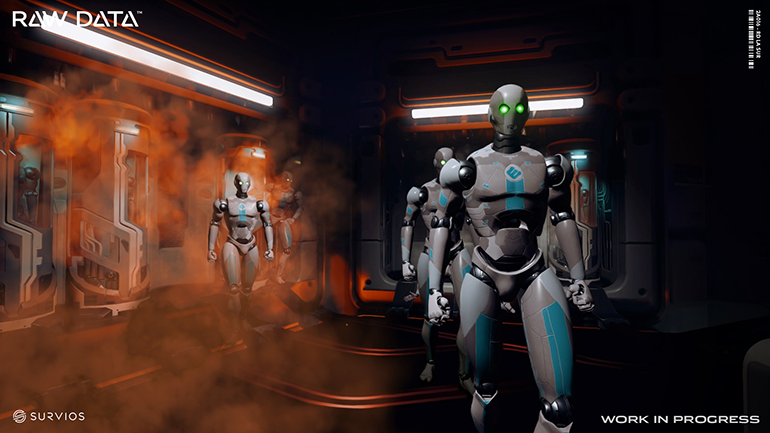 What were some of the more common reactions to Raw Data from those that experienced it during GDC?

When the Vive headsets came off our GDC demo players, the phrase we heard the most was “That was awesome/badass/so much fun!” The most entertaining aspect was seeing the most introverted personalities turn into natural-born assassins or tricked-out action heros in a matter of seconds. One guy even held the Vive controllers upside down so he could hold the katanas with an inverted grip. This kind of emergent gameplay is totally unplanned and a ton of fun to see.

We documented the many expressions of Raw Data players throughout GDC on our Instagram, and their faces say it all: you can watch them become more immersed in the game the longer they play, as their expressions and body language shift from "oh-my-god" surprise to "I-got-this" confidence.

Please explain why your team chose Unreal Engine 4 to bring its vision for Raw Data to life.

We’re big fans of Unreal Engine 4 and everything it offers VR developers. Unreal gives us not only access to a strong core feature set, solid engine updates and community support, but also the ability to work directly with source code. This flexibility gave our engineers the tools they needed to rapidly create control and visual technology that didn’t already exist in the VR space, which resulted in the visceral, co-op experience that has set Raw Data apart from other shooters. 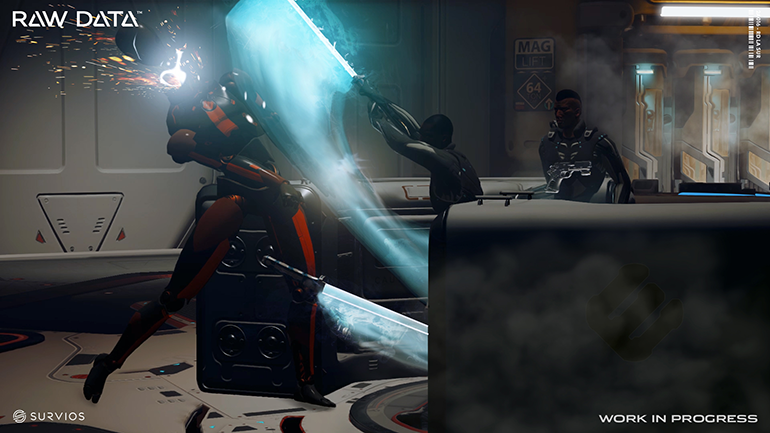 At GDC 2016, the availability of the VR Editor for Unreal Engine was announced. How do you feel that the capability to create and edit VR experiences while in VR will impact the development process?

Anything that lets us get as close as possible to the VR experience while we’re building it will help immensely. As humans, we have a great understanding of space in the real world, and the VR Editor allows us to utilize that understanding when building our virtual worlds. This should afford the ability to create richer, more immersive experiences in much shorter periods of time.

Why would you recommend Unreal Engine 4 to other developers looking to pursue VR ventures?

It’s great being able to work with the engine source, plus Unreal has peerless core features and solid, reliable updates. All of it together lets developers create unique controls and systems, while simultaneously being able to highly optimize the experience.

What are the current and future plans for Raw Data as a VR experience?

We have a lot of plans for how Raw Data could evolve, but are keeping them under wraps for now. It’s also important to us that we engage with our community before committing to any major plans, as the game should grow with our players - their opinions and feedback matters above all else, and we’re going to make them an integral part of the development process as we move from demo to Early Access to final product.

Thanks so much for your time! Please tell our readers when/how they can experience Raw Data and where to go for the latest information.

You’re welcome! Thank you for this opportunity to share our love for Unreal Engine and its incomparable impact on Raw Data’s development. We welcome discussions and questions on Raw Data’s Steam community forums, which are serving as our main hub for the game. The best sources for news are our social media channels on Twitter, Facebook and Instagram. You’ll also see us engaging with VR devs and enthusiasts on Reddit within the r/Vive and r/Oculus subreddits. Finally, we’ll be active at several gaming and VR events from now through the end of the year, so keep an eye on our channels to find out where we’ll be!