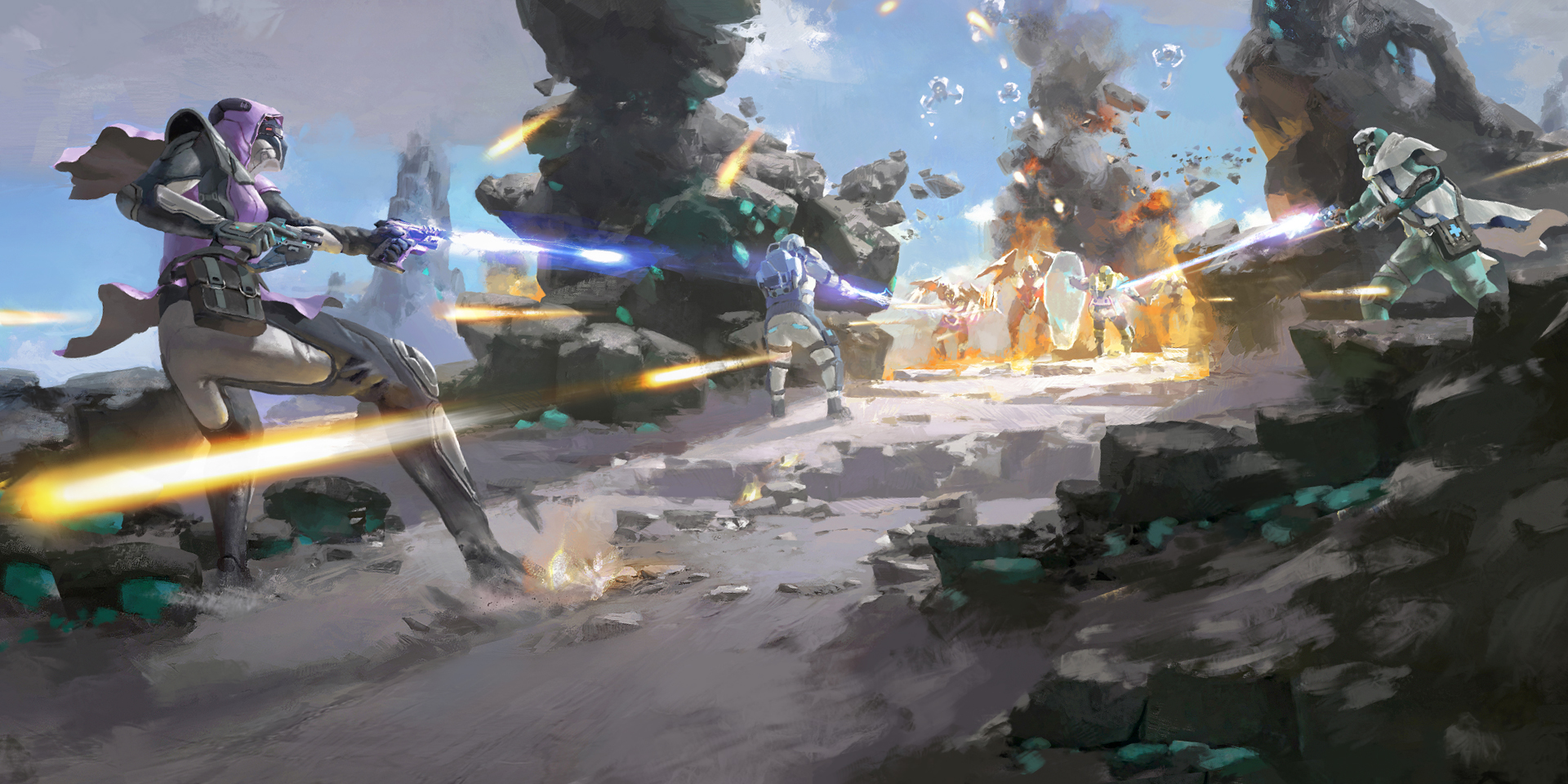 Developers looking to dive into the virtual reality space are likely attracted by the unprecedented immersion that the medium provides. Being able to tell stories that are uniquely intimate while providing action-packed moments that instantly transform into memorable experiences is certainly part of the draw. That said, the VR space still presents a number of challenges for developers who want to translate what is known into something new.

That is the goal of Evasion - a newly-announced ‘bullet hell’ shooter set in a post-apocalyptic alien world that has been built from the ground up in Unreal Engine 4 for free-move locomotion and cooperative team combat - two challenging areas of the VR space that developer Archiact isn’t afraid to tackle head on.

I recently caught up with Lead Software Engineer Brian Milligan at Archiact VR to find out more about Evasion and how they hope it will come to define co-op VR experiences.

So, what’s Evasion all about?

Evasion is an insane VR ‘bullet hell’ shooter set in a post-apocalyptic alien world. It’s been built from the ground up for free-move locomotion and co-op team combat. We want to create a VR game that takes you into the feeling of a true FPS console like experience, we are trying to push the boundaries and challenge some of the early assumptions made about what can and cannot be done in VR.

Why was it important to have a room-scale four-player co-op experience in Evasion?

We want you to feel fully immersed and really feel like a hero in this game, so room-scale space lets you immersively dodge, take cover and move. That said, we also designed for smaller spaces so you can control everything in standing space. Co-op is huge for our game and is one of our design pillars plastered on our main studio wall. You can play the game single player and have a blast, but you’re much better off with a squad so you can combine the unique abilities of each class.

Can you break down the different roles players can have on their squad and how they complement one another?

We have a lot of co-op mechanics in the works where our different classes can compliment and empower each other. Each class has a unique offensive weapon and on their other hand an ability to buff their teammates, as well as passive abilities and powerful ultimates. Each class can then interact with the others to stack crazy combos! Also, since the game is objective based we get clutch hero moments where a player can save the team when down to the wire of triumph or doom.

What types of enemies will players be fighting against in Evasion?

Carefully crafted AI is a priority for us in order to make a shooter that feels great. Your basic core mechanics revolve around the skill of hitting intelligent targets and defending against a readable source of incoming fire. In Evasion you’ll be fighting a coordinated army of cyborg insects whose behavior we modeled off real bugs. For the squad based enemies we used flocking formations that give it classic arcade Galaga feeling and looked at communication and movement between social insects such as ants, wasps, bees and termites. These squad based enemies are really difficult in high numbers, and need to be dwindled down to control the volume of bullet hell coming at you. We also have a collection of big badasses that are armed to the teeth modeled off of beetles, giant hornets and archanids. 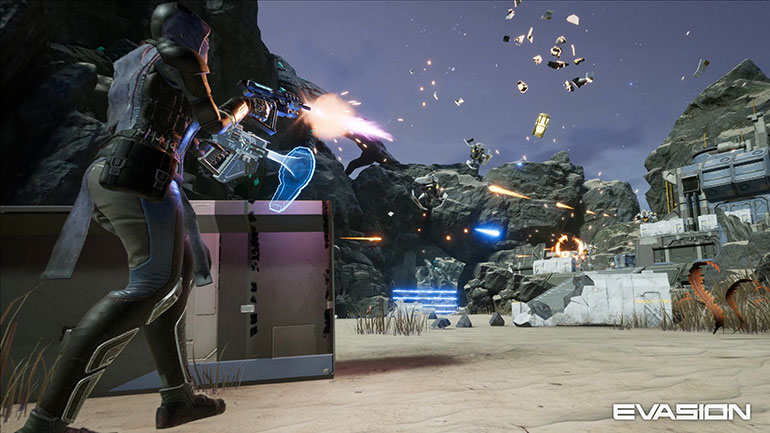 Teamwork plays an essential role in Evasion. Can you describe the ways in which players will need to look out for one another to ensure success?

The action is furious so having team members save you with healing is pretty key. Also the game is objective-based so each situation will require players to take different tactical roles. The environments have been laid out to give players a lot of space for cool tactics, so you can coordinate your attacks with flanking routes, ambushes and solo plays if you wish.

Movement is usually one of the tougher aspects of the experience to solve for in VR. What approach have you taken to environmental traversal in Evasion?

Our goal from day one was to double down on outstanding movement options. Much of our team was really hyped to realize full free-moving locomotion in VR, as we saw over and over again in the community that there was a strong contingent that want console-like locomotion for the player. At the same time we are sensitive to those that get motion sick, so we crafted movement modes from free-movement to small dashes that we found even the most sensitive people didn’t get sick in. We found a lot of people were able to progress from the sensitive options up to the full freemove once they got their legs. 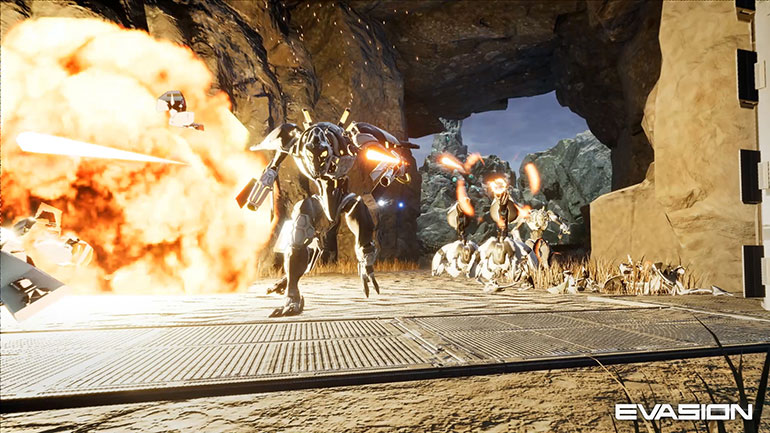 What role does the game’s audio play in bringing the experience to life?

Audio plays a huge role in our game, as with any VR game the immersion of 3D spatial audio is key to keeping the player grounded. Being a bullet hell extravaganza, it’s critical to gameplay to keep players aware of where the baddies are and the direction of incoming firepower. We have a lot of sounds as there are explosions, destruction, projectiles, enemies and general chaos everywhere! Our Sound Engineer and designer have been kept really busy and their hard work is really paying off.

Bullet hell experiences tend to be quite intense. Considering that Evasion is a VR title, how have you employed the best elements of the genre while ensuring the game is approachable as well?

We leaned into several aspects of bullet hell starting with the sheer visual spectacle. As you can see from the trailer, we have so much going on and we keep the action up -  big guns, big baddies, big explosions. The other aspect is skill level. Evasion will keep you on your toes, precisely like our name suggestions so you need to keep evading the shots with physical dodges and pro-active locomotion.

As far as accessibility, on one hand we push for “easy to learn, hard to master”. You can play at many levels and like most games you’ll die a lot when you start out and then progress into a ninja-like killing machine. Make no mistake about it though, this is an hardcore bullet hell shooter, we think there are enough of the five minute demo experiences in VR for casual players. 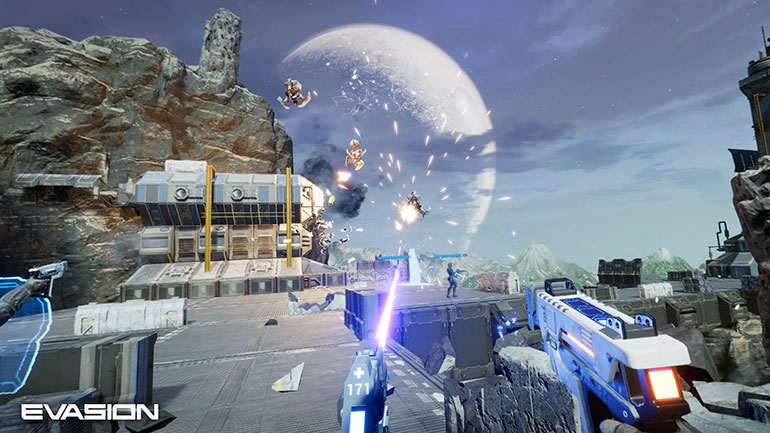 The game looks gorgeous. Tell us about the team’s goals in the graphics department and the steps you’ve taken to achieve them.

The art flows out of the story and using Unreal we really set out to take you to an epic alien world. The art team has worked really hard to make everything cohesive and immersive. We made big choices early on with embracing full body IK-powered avatars, unconventional enemy body shapes and multiple locomotion options to transport you in the environment. Then we really want to hit the player over the head with the VFX, explosive action and off-the-charts destruction. We are pushing the limits with a “shoot for the moon” approach to everything, then have driven hard to ‘optimize optimize optimize’. Unreal has been phenomenal with all the resources we have poured over, from providing the source/contents of Robo Recall as a learning resource and including all the awesome Unreal developer live streams. I’m pretty excited that this will push your badass PC rig to the limit but can also scale down to min spec.

Why did your team choose Unreal Engine 4 for this project?

One of our devs on a previous project was curious about learning Unreal and was able to make a pretty gorgeous demo in about six weeks (shout out to Ash!). That really blazed trails and we set ourselves up for success with a game called Drone Storm featured in VR Arcades in China. With his initiative the team grew and fell in love with Unreal. I later came onboard from previously working on Gears of War 4 so I was already in love with the engine. The top quality graphics and top of the line multiplayer networking made it an easy choice getting started on this high ambition project, but what has really empowered us is the incredible agility that Unreal gives us. Our designers and artists can produce so much with the rich editor tools like Blueprints and the Material Editor, and engineers can focus on making systems and tools that empower them. 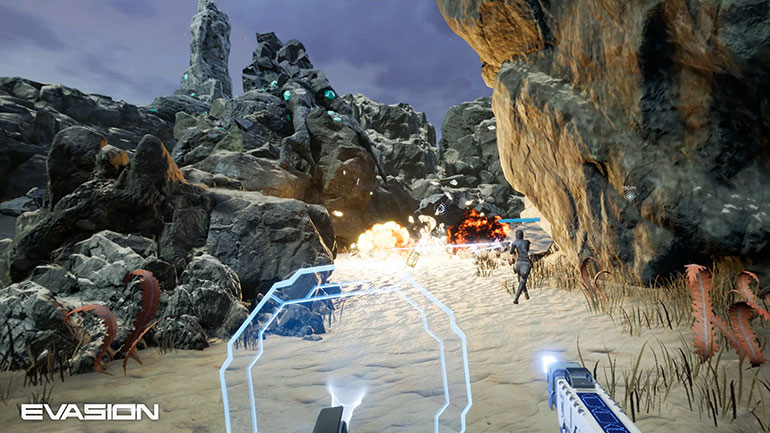 Are there any aspects of UE that the team has found particularly useful throughout development?

We have pushed hard on all the tools made available to us through Unreal. We were so excited about so much of the animation and physics aspects that were shown at GDC 2016. Destruction, physical animations and In Editor cloth creation really ramped up our ambitions. The aspect that is biggest for me though is that the engine is open source. We can step into everything and aren’t left with a lot of mysteries about how it all works under the hood. If something isn’t working the way we need it to, we can make changes as necessary.

We are really trying to push this game to take advantage of every bit of metal that will scale from a beast machine down to VR min specs. Many games tax the GPU but are leaving a lot of idle time on the CPU. We are approaching PC development like console development, and with our GPU always at redline to keep up 90fps we are looking at how we can similarly scale for high end CPUs. With an i7 we have twice the free running threads to deal with physics which Unreal 4 does on the CPU by default. So on the CPU we scale massive sims with destruction, cloth and animations. We push these things to the CPU limit so we can scale cosmetically, for example have rocks bounce into tiny fragments on the high end then leave them chunkier on a low end spec. Note all the high end physics features will be configurable settings, but your framerate may suffer if you are pushing past recommended specs for a feature level. 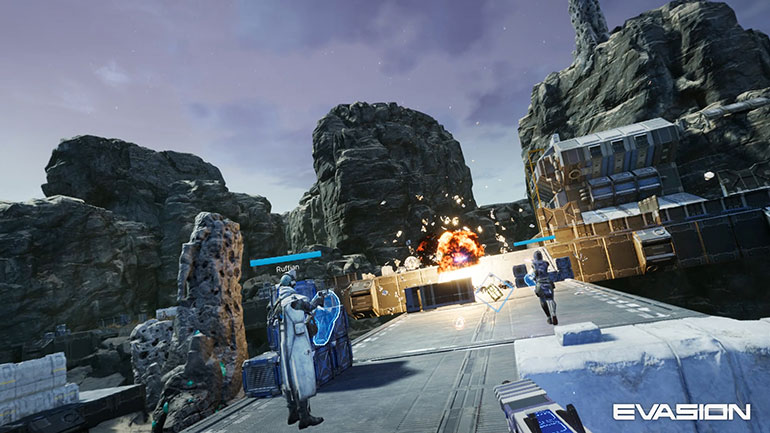 Where is Evasion at in development and where can people go to learn more about it?

We are in the pre-alpha phase and just completed a big push for our announce demo! Follow more at www.evasionvrgame.com and sign up for a chance to join our Beta program and add us to your wishlist on Steam!