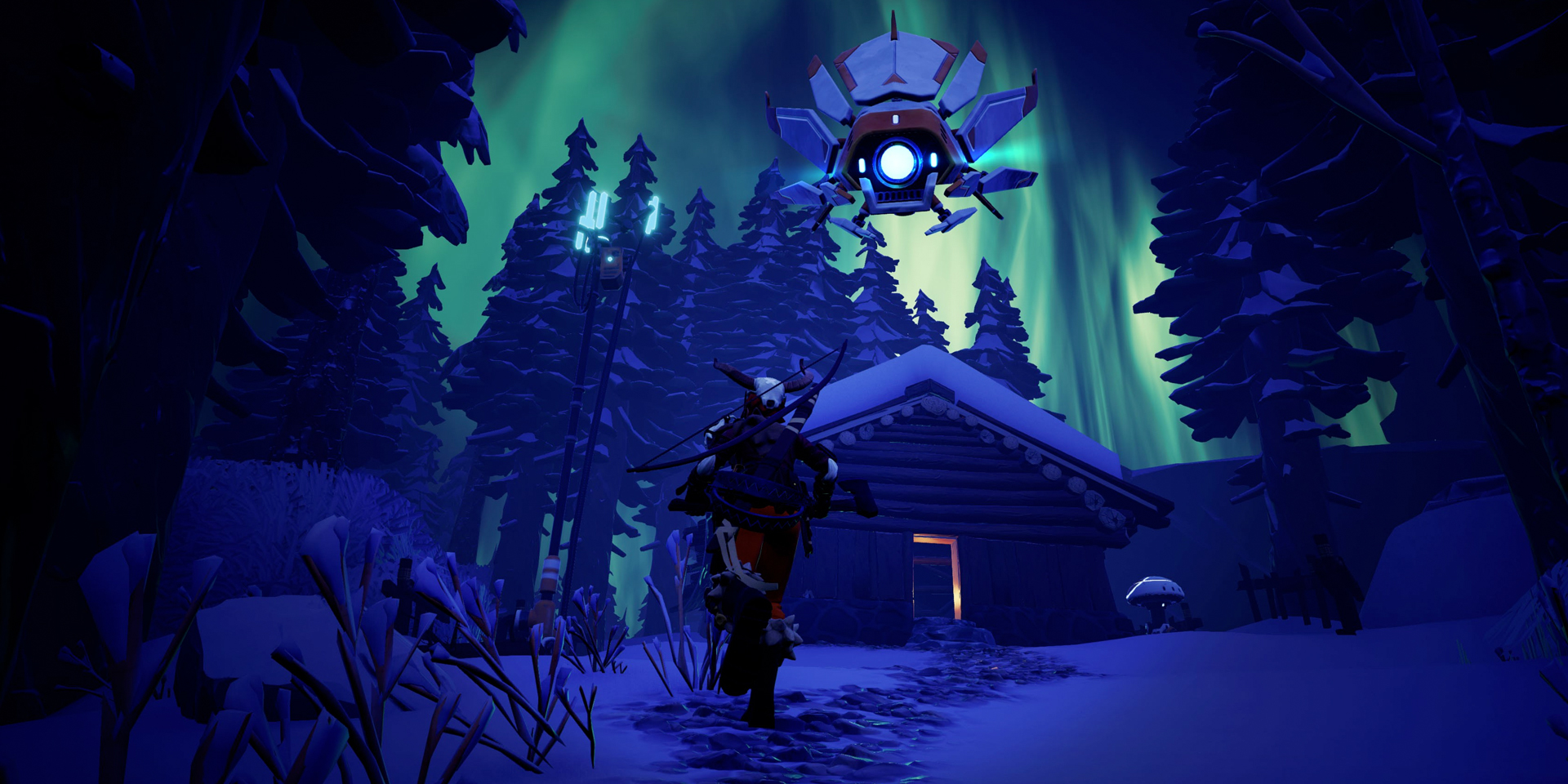 The newest and without a doubt biggest genre in gaming right now is the mighty battle royale. We’ve seen many newcomers to the genre over the past year or so but none of them quite like Canadian indie developer Scavengers’ Darwin Project. Recently taking the route of going free-to-play, this below zero themed battle royale has a few ice-cold tricks up its sleeve.

Inviting players to their own backyard, Darwin Project takes place in the frozen peaks of the Canadian Rockies where not only will you fight for survival against your opponents but the environment as well. Players will need to stave off the cold and keep moving all the while leaving a trail of breadcrumbs in their wake. Opponents will track your every movement setting traps where you least expect them. Think you can hide in a bush? Think again!

Uniquely utilizing both its players and its spectators, Darwin Project also introduces a role they call the Show Director to the battle royale spectrum. Gain the favor of the crowd and the Show Director themself for a leg up on the competition. How you achieve that is up to you but as one famous battle royale themed movie once said, "May the odds be ever in your favor." Bundle up and joins us as we chat with the team from Scavengers about all things Darwin Project.

Scavengers has been a team since 2015 with Darwin Project being the first, uhhh... project. Can you tell us a bit about some of the team's background and what brought you all together?

Simon Darveau, Creative Director: Darwin Project started with an idea for a videogame reality show, inspired by the Twitch Plays Pokémon phenomenon, that entered my mind back in 2014. I participated in a game jam organized by Amélie Lamarche and had a chance to tell her about the concept. Though I didn’t win the game jam that day, Amélie was equally excited about the idea that would eventually become Darwin Project, and we decided to found Scavengers Studio together.

The vision for Darwin Project caught on with others in the industry, too, and before we knew it, we had some highly experienced developers on board. Since we were and still remain a small team, making the project a reality has its share of challenges, but we’re really proud of what we’ve built so far. Even now that we’ve launched Darwin Project in Early Access, the team is still incredibly motivated to continue improving the game. One special moment that comes to mind is when our online architect succeeded in improving our Spectator Interactions feature to combine viewer votes across different streams. Seeing it in action during a playtest made us feel unstoppable!

Darwin Project's snowy, white arena truly stands out. How has Unreal Engine 4 helped you achieve your goals for this visual direction?

Thibault Hubert, 3D Developer: Unreal Engine 4 was (and continues to be) a huge help in building our mountainous arena. To create the environmental feel, including varied time of day and weather effects, we used built-in features like atmospheric scattering, fog, and integrated effects. These allowed us to quickly achieve a high level of quality that can be adapted to every type of hardware. Building worlds with Unreal is a delight; for each feature that we wanted to add, it provided an accessible solution. 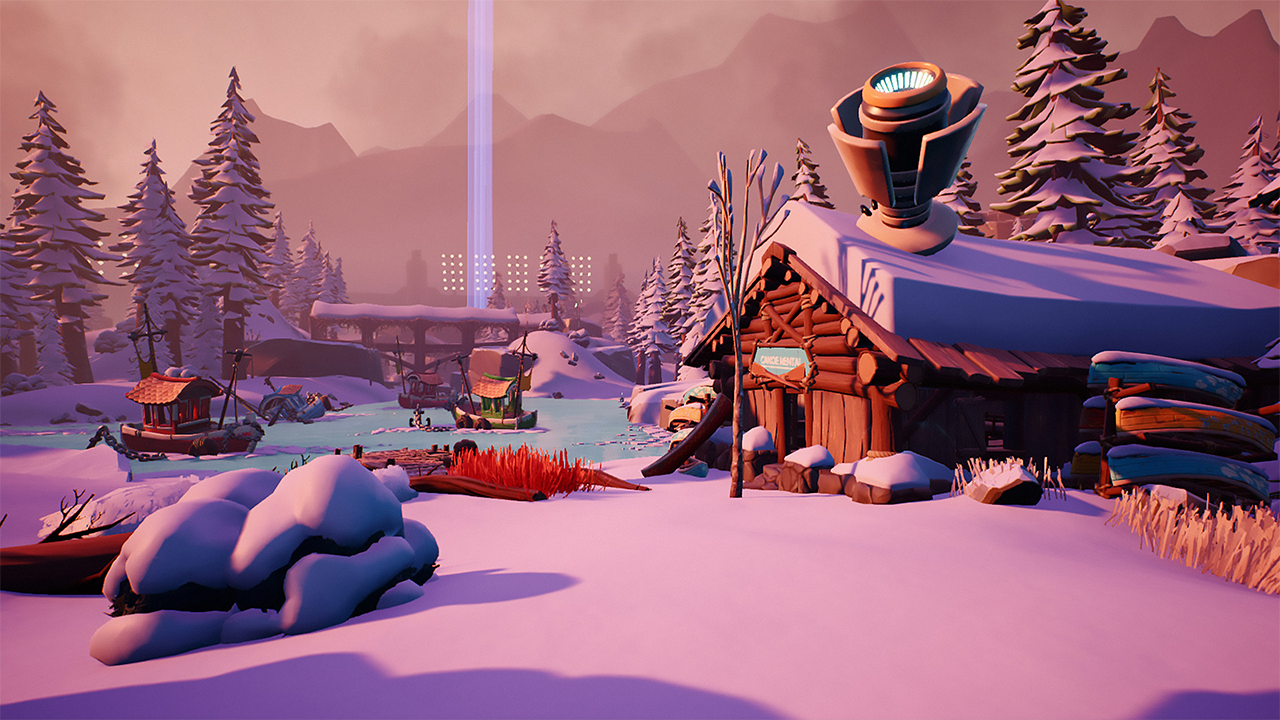 What was the biggest reason you decided on this 'Great White North' arena? You wanted everyone to know you're Canadian, didn't you?

Simon Darveau, Creative Director: Yeah, we wanted to represent how difficult it is to survive Canada’s cold winters.

Okay, no. We chose this setting in part to minimize the amount of downtime players experience. Because the cold will eventually kill any player who doesn’t find a source of heat, players need to move around the map in search of trees to cut down for firewood. In doing so, they might encounter other players, track other players or become tracked themselves, make a sudden beeline for an Electronic, pull off a move that wins the favour of the Show Director or the audience―all of which make for exciting moments.

A snowy setting also means that players are easier to track because of footprints, which we expand on next.

A popular tactic in many battle royale games is the 'hide and wait' technique. In Darwin Project you've added something you're calling the 'Manhunt'. Tell us a bit about how the Manhunt feature works and what led you to incorporate it into the game.

Simon Darveau, Creative Director: The manhunt is the second half of the equation that ensures hiding isn’t a valid strategy in Darwin Project.

We already mentioned how the cold meter will punish players who try to wait until there are fewer players left alive to confront an opponent. When players realize they’re freezing to death and decide to chop down a tree or two to build a fire, those actions will leave clues in the arena that others can use to track them to their current location.

In addition to clues, there are other ways of locating players in the arena: following footprints, finding a Holomap, paying attention to various sounds, and even using special tools and equipment. With the manhunt at the core of Darwin Project, we’re tightening up the battle royale experience by making sure players are always within arm’s reach of an epic confrontation. Even when there are no opponents in sight, players can still feel like a true prisoner-turned-hunter. There’s never a sense of “what should I do next?” 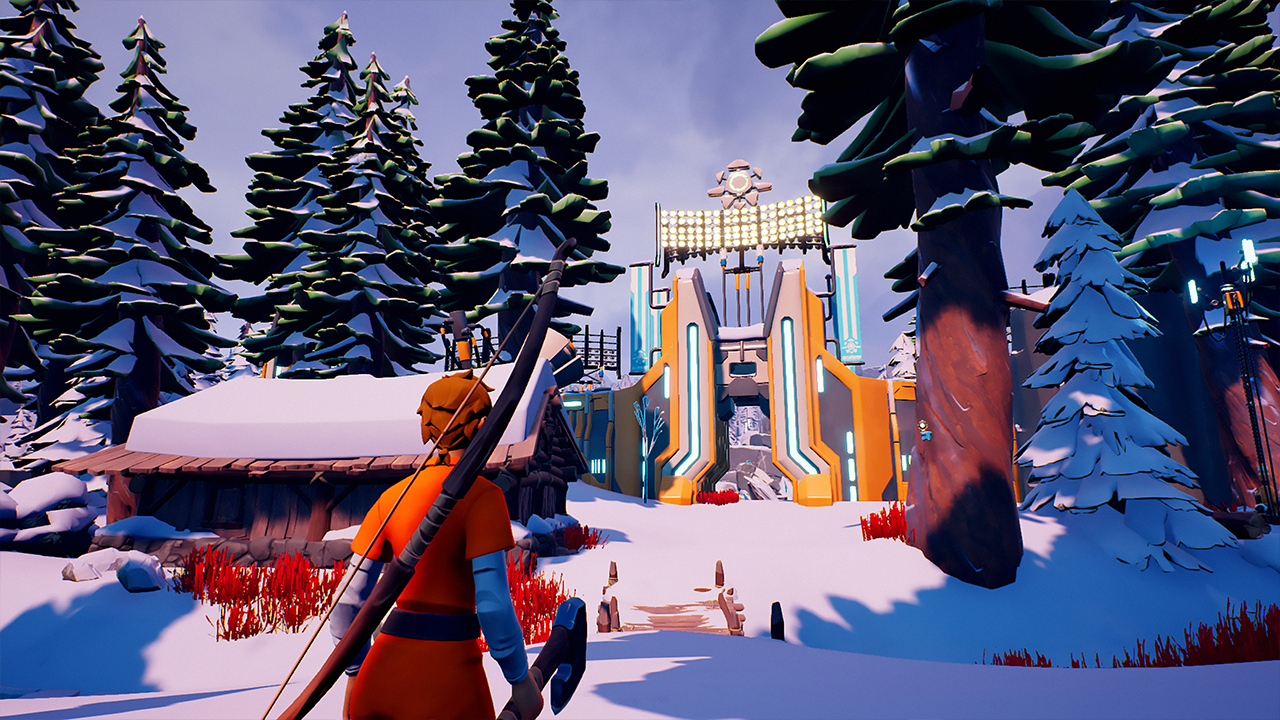 One of Darwin Project's most interesting mechanics is the Show Director which focuses on getting spectators more involved. How does it work and why was it so important to you to bridge the gap between player and spectator?

Simon Darveau, Creative Director: The Show Director’s purpose is to make Darwin Project more entertaining for both players and spectators by adding an extra dimension to the gameplay. The player in the Show Director drone can fly freely across the map, teleport from one contestant to another, and unleash powers such as Heal, Warm Up, Gravity Storm, Nuke, and more. With a Show Director in the match, contestants have an extra tool at their disposal: social skills. Winning over the Show Director (and the audience, if there is at least one player in the match streaming) becomes another way contestants can try to gain the upper hand―or at least survive a few minutes longer.

The Show Director can choose to let the audience vote on the target for a selected power. This feature, called Spectator Interactions, has been popular with Twitch and Mixer viewers because it allows them to have a say in the match. Spectator Interactions are our way of involving viewers and turning the experience of watching a Darwin Project match into an active rather than passive activity.

I opened by saying that watching a livestream where people in the chat were influencing the outcome of the game was what originally inspired the foundation for Darwin Project, so it’s no surprise that we’re building the game with spectators in mind. Spectator involvement has so much potential, and we’re excited to see where it’ll take the industry in the coming years. 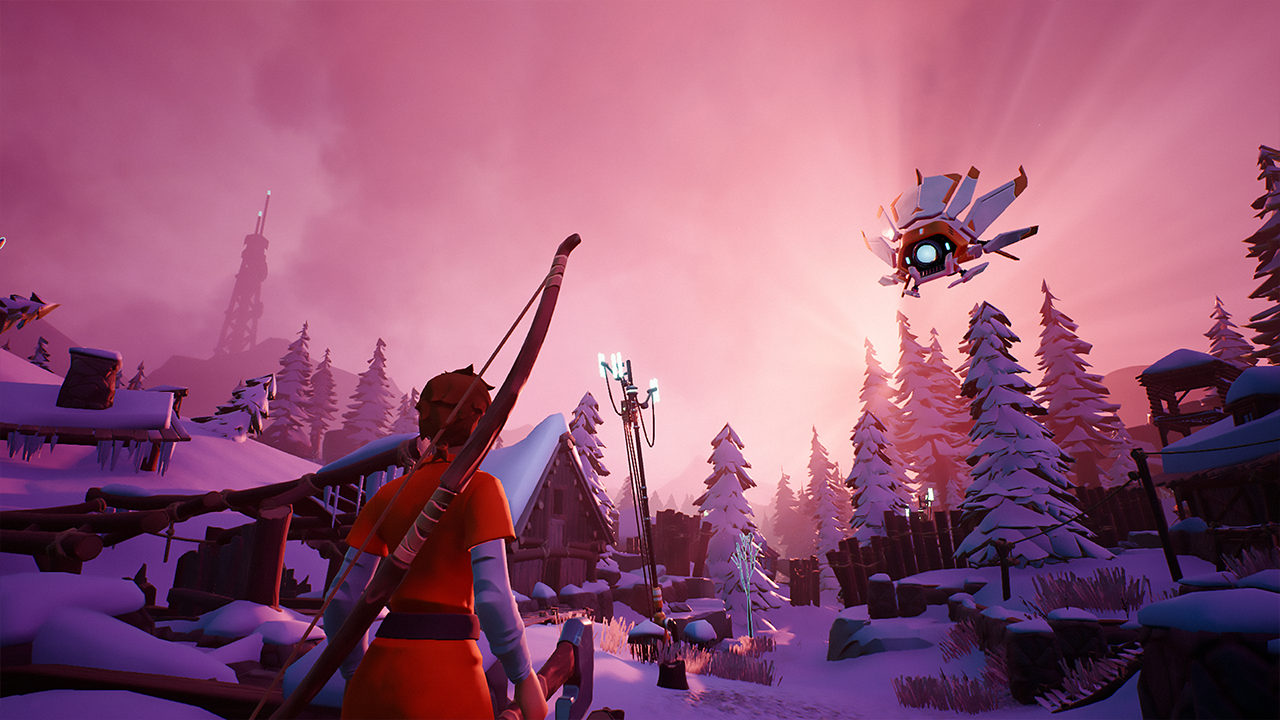 Darwin Project has had an active community helping provide regular feedback during the game's development. How has this feedback helped to shape Darwin Project over the past few months?

Simon Darveau, Creative Director: We’re so grateful for all the players who believed in Darwin Project from the start. We built a core community very early on, with players joining us for private playtests even before our Alpha and Beta weekends. Gathering feedback from an active community of early fans is important for any multiplayer game, but it was especially crucial for Darwin Project because of how heavily it leans into social interactions as well as the way some of our features―specifically the Show Director and Spectator Interactions―didn’t really have clear precedents. We needed to examine as many encounters as we could between contestants, Show Directors, and spectators to not only ensure the systems worked, but take note of what kind of reactions different interactions led to.

And we’re still learning. Lately, we made some changes to the Show Director’s ability to target specific players with some powers because of a discrepancy we noticed between how players react when powers like Heals are given by the Show Director directly and when they’re automatically applied after the target has been voted on by the audience. 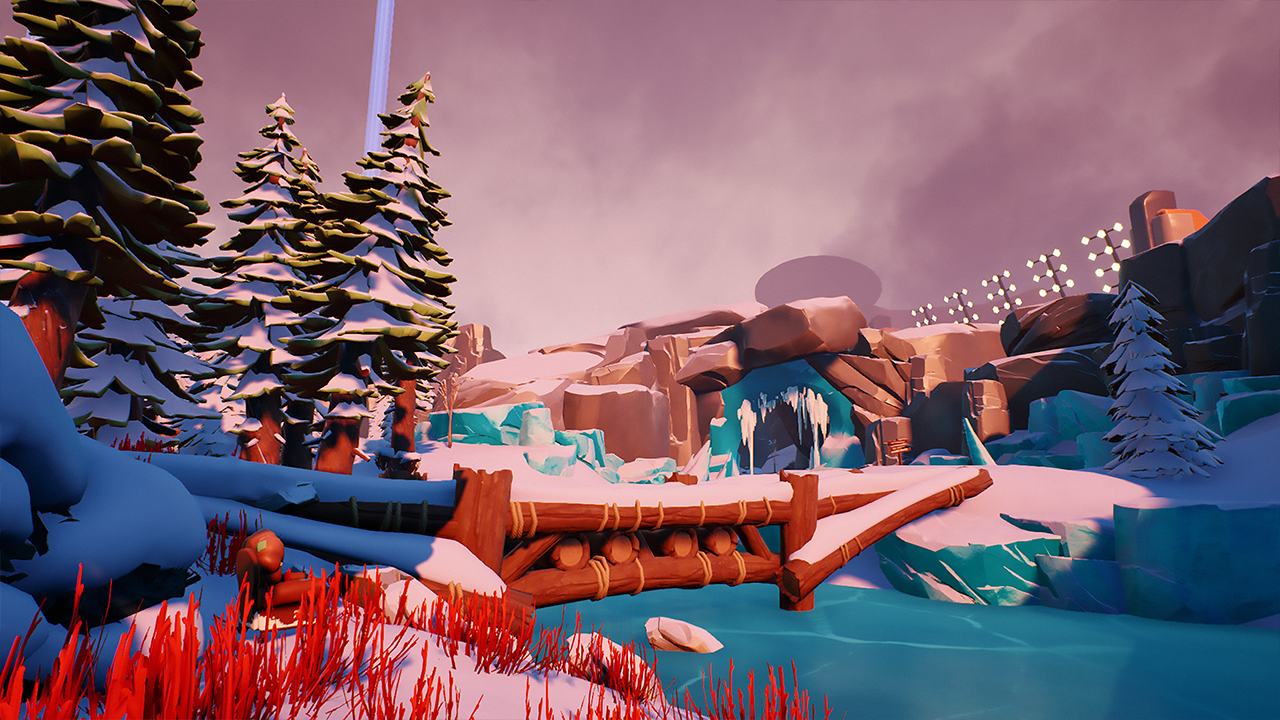 What do the quickly growing streaming platforms bring to the table for a game that focuses so heavily on viewer engagement?

When we were building the Spectator Interactions feature, we were focused on the viewer experience, so one thing that pleasantly surprised us was how fun the vote system is for broadcasters, too. Some players in our community are making their debut as Twitch or Mixer streamers, embracing the Show Director role as a way to practice commentating and engaging with the audience. It’s been amazing to see streamers find their Show Director style and to watch their channels grow!

As a contestant, coming in first place for the Crowd Favorite vote is a bigger thrill than we expected. There’s a very specific sense of pride mixed with trepidation when you realize you’re probably more likely to be helped if you come close to freezing, but your skill also means that viewers looking for a good show may want to unleash a Manhunt on you (during a Manhunt, your position is revealed to all players and a reward is given to a player who manages to take you down within the time limit). And of course, there’s no better feeling than receiving that clutch heal from the crowd just when you need it! 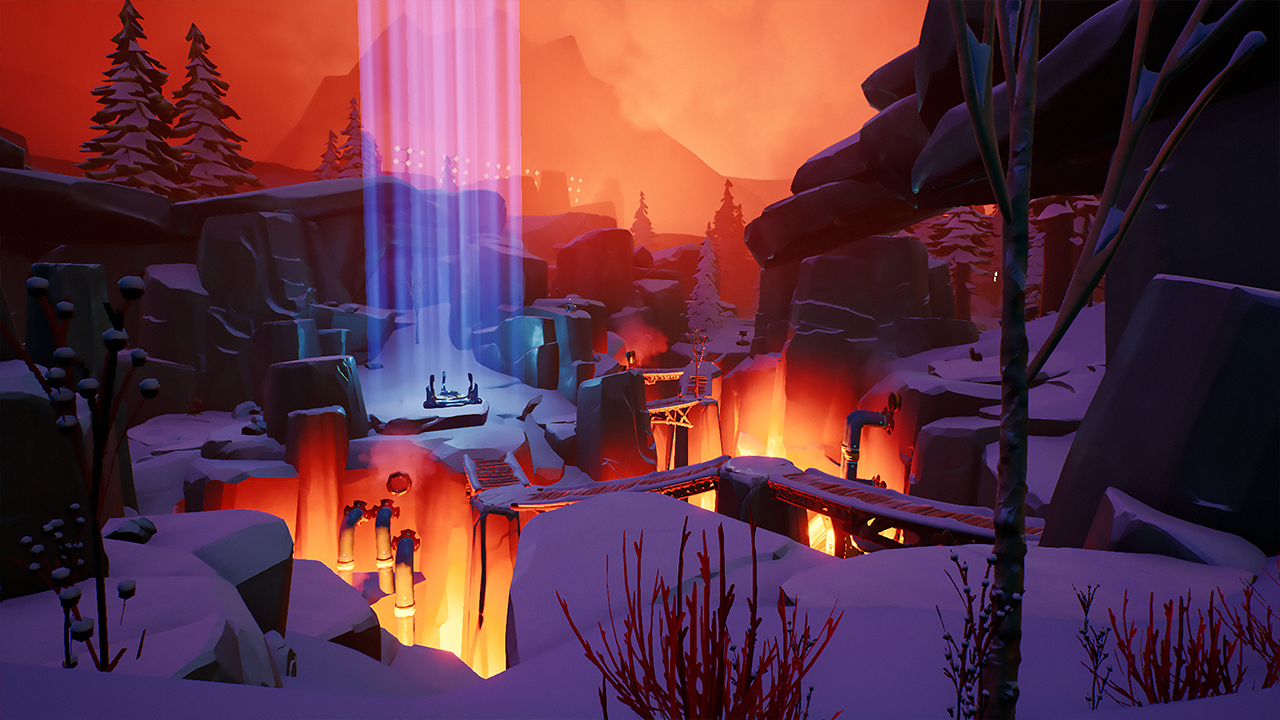 Darwin Project has changed a lot since its early Alpha days. Was there any one tool of Unreal Engine 4 that proved crucial to make all those improvements happen?

Thibault Hubert, 3D Developer: Blueprints is really a great tool. We added lots of content throughout the few tests and Early Access, and Blueprints made it possible to quickly prototype and decide what worked and what didn’t before going any further. We’re still using Blueprints to iterate on upcoming features, particularly new Show Director powers that we’re trying out (and that we’re excited to reveal). We save a lot of time by being able to tell right away whether a specific feature makes sense for Darwin Project at an early stage.

Developing a game is a journey and I'm sure you've learned a lot since you started in 2015. If you could offer any advice to someone looking to dive into development with Unreal Engine 4 what would it be?

Where can people go to find out more about Darwin Project?