The game, Pamoja Mtaani (“Together in the Hood”), is an open-world game that allows up to five players in select youth centers throughout Nairobi to work together through a collection of twitch mini-games. Each player will take on the role of a unique character and play through a quest that has been developed to be both fun and educational. Top Kenyan hip-hop artists were tapped to provide relevant and inspirational original music for use exclusively in the game. 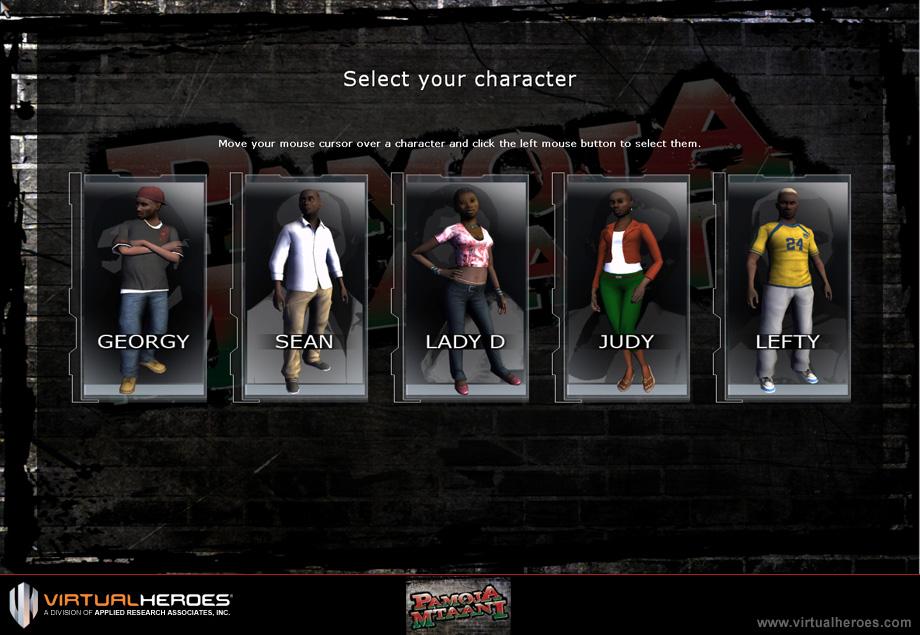 “This game has unique and fairly low system requirements, so using Unreal Engine 2.5 allowed us to create an open-world game with the look and feel for three distinct parts of an East African city in the highest quality possible without affecting gameplay,” said Kirsten Gavoni, producer of Pamoja Mtaani at WBIE. “Unreal Engine 2.5 also enabled us to create a large number of NPCs with thousands of lines of unique dialog, adding to the immersive feel of the city.”

To make this five-player, LAN-based PC game experience a reality, Virtual Heroes opted to use the older Unreal Engine 2.5 rather than Unreal Engine 3 in an effort to reach the widest dissemination possible across the available hardware in Kenyan youth clinics, schools, and other facilities.

A team of 25 people spent 10 months working on the game. Under normal circumstances, a game of this size generally takes two years to develop from scratch. Unreal Engine 2.5 forms the low-level foundation of Virtual Heroes’ platform and provides core functionalities, such as 3D rendering, audio, networking, and physics. 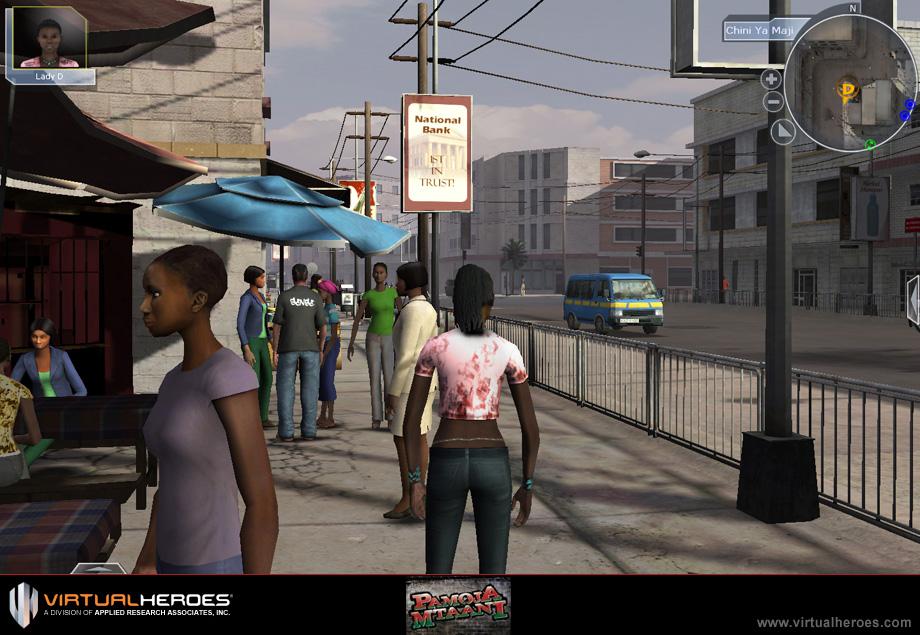 “We ended up producing an open-world, multi-player environment with four large, distinct outdoor areas, several hundreds of interactive NPCs and a few dozen vehicles, resulting in a total of almost ten thousand game objects, all being processed simultaneously on the game server,” said Virtual Heroes' tech director. “From a resource point of view, this put tremendous strain on the game logic and networking side of things. With a balanced mix of UnrealScript and native C++ code, the fully integrated networking layer of Unreal Engine, as well as a few extra techniques, we were able to optimize performance and tune game play. We used the conversation engine from our Advanced Learning Technology Platform to facilitate complex NPC interactions using thousands of lines of branching dialog.”

On top of that, Virtual Heroes’ platform implements a generic game framework and a multitude of general-purpose functionalities, including things like conversation engines, user-interface controls, movie playback, or database connectivity. This allowed the team to spend most of the development time focused on game-specific features.”

To ensure these features connected with Kenyan youth, team members from Virtual Heroes and WBIE traveled to Kenya to get a better understanding of the culture that plays a larger role in the serious game. According to the game's designer at Virtual Heroes, Pamoja Mtaani consists of four large and unique environments based upon the different socio-economic regions of Nairobi, Kenya. The regions (Chini Ya Maji, Ulamini, Jijini, and an open-air Youth Festival) were designed using extensive in-country research with the ultimate goal of creating a truly immersive and culturally accurate living world. 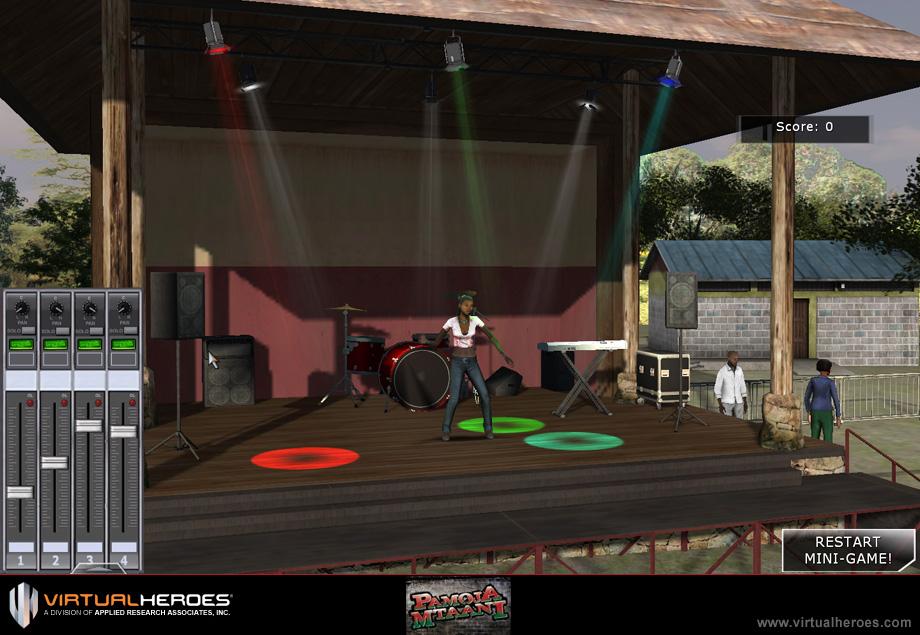 “From our initial research, we realized that this game had to take a different approach from the conventional HIV/AIDS awareness didactic approach,” he explained. “We knew that the youth would resist an ‘in your face’ educational game, but we also wanted to avoid a simplified game that rewarded players for choosing the correct path to avoid ‘risky behaviors,’ because we felt that the youth would only make those decisions because the game would reward them for doing so, not because of any actual behavioral change within the player. Instead, we incorporated a ‘stealth learning’ approach that is concentrated within the game’s cinematics and character interactions.”

At the beginning of _Pamoja Mtanni_, each of the five playable characters practice a specific risky behavior that makes them more susceptible to contracting or spreading HIV. Throughout the course of gameplay, and reinforced through cinematics and in-game interactions, each character comes to realize the risks that they have been taking and the proper steps with which to avoid them.

Several production staff spent a lot of time in Africa to get up close and personal with the people and the environment. Aiding the team in bringing this virtual Kenya to life was Unreal Engine 2.5 technology. During development of the game, the team heavily used Unreal Engine tools like UnrealEd for level creation and content management, the UCC script compiler for game script creation, and a few other small tools such as font converter and Maya plug-ins.

Even though the game was initially deployed only in selected locations in Kenya, the original intent was always to increase HIV/AIDS awareness on the entire continent of Africa and to distribute the game in multiple countries. The differences in regional requirements for a videogame can be quite drastic, not only because of the different languages spoken in different areas and countries, but also ethnic and cultural differences.

In addition to future expansion of the game across Kenya and Africa, Pamoja Mtaani is part of a multimedia push by Warner Bros. across multiple divisions. Each of the five characters from the game are featured in a series of computer-animated shorts created by Warner Bros. Motion Picture Imaging that will introduce them to the target audience of Kenyan Youth. In addition, Warner Bros. Advanced Digital Services has created a website that will provide information on the Partnership for an HIV-Free Generation Initiative. Warner Bros. Motion Picture Imaging also created film trailers to raise awareness and drive viewer traffic to the PEPFAR documentary, “Saving Lives, Creating Hope” detailing the program.