Just because jousting game Last Knight has a colorful cartoon-style and larger-than-life characters, you shouldn’t make the mistake of thinking the game is easy or childish. Its creator, David Hagemann, worked hard to keep the game simple to play, but challenging to master.

There are few second chances: no health points to be replenished, no pausing once the joust is underway, and the ragdoll physics ensure that when you bump into something the results can be devastating.

That degree of difficulty is deliberate. Hagemann believes that there has been a trend recently for games to become easier and he’s not in favor of it. “Playing the game becomes less meaningful if the main objective becomes levelling up, with points popping up everywhere. Games should go back to putting the fun first.” 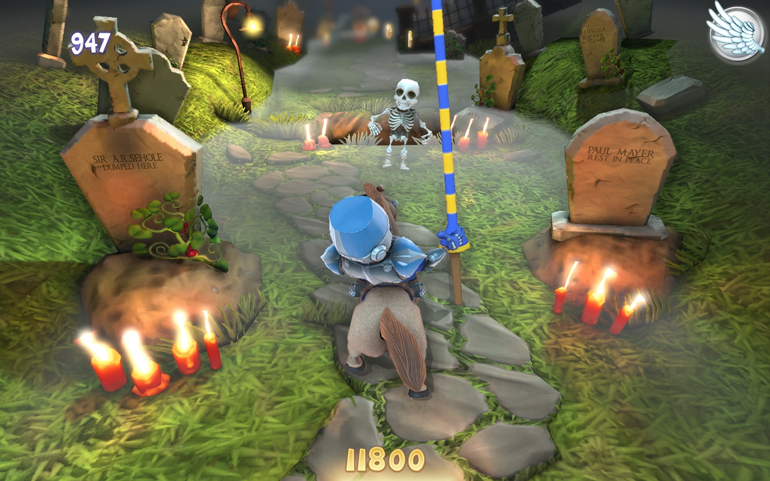 Hagemann is a veteran of Epic Games’ $1 Million Intel Make Something Unreal Contest, having seen his Unreal Tournament 3 characters (gene-mutated mice and monster bunnies) come first and second in the character category in the mod competition. Experimenting with Unreal Tournament 3 led to a career as a freelance 3D artist but his ambition was always to make his own games.

It was the release of the free Unreal Development Kit (UDK) that prompted him to start working with Unreal again, and he began work on the game that would become Last Knight. Musician Edouard Brenneisen and sound designer Jarno Sarkula came on board early on as the game grew in scope.

The graphics in Last Knight are considerably more complex than they look – a lot of work went into creating that effortlessly simple visual style. 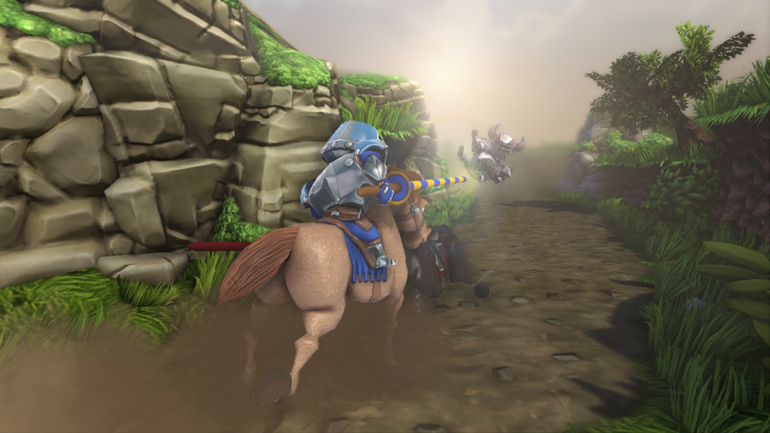 The game environment was sculpted in ZBrush and then the high-res meshes baked to low-poly meshes with normal maps and ambient occlusion bakes. The game also makes full use of Unreal Engine 3’s Lightmass global illumination which was deftly implemented in the randomly generated game world. All kinds of post-process effects were used as well. “In the Knightmare levels I kind of went nuts with it; I used the material system to bend the whole world in different ways, literally,” Hagemann says.

Last Knight might look bright and colorful, but there are some dark and sinister characters: skeletons rise from their graves, giant toads swallow the heroes, and there’s an army of lunatic Horned Bucket Heads on the loose who are always ready for a joust to the death.

“I wanted to create a look that was reminiscent of older, stylized 3D platform games but which used all the graphic possibilities of Unreal Engine to make a detailed and rich environment,” says Hagemann.

Hagemann found that the versatility of Unreal Engine’s tools enabled him to get his game up and running and looking good fast. “The shader and post-processing editor lets you quickly create all kinds of material effects and styles, and the particle effects editor has so many options that are quick to change and preview. The Matinee editor enables you to animate tons of different things, and then all the different tools help you put together worlds with your artwork pieces. Smaller things like automatically generating lightmap UVWs and generating LOD meshes also help to speed up the workflow.”

Would he recommend this approach to other would-be game creators? “Yes, if you start simple, and don't try to learn everything at once. The Unreal Engine has a lot of complex parts, but there are a huge number of tutorials available - professional video tutorials, as well a lot of freely available ones. Starting with a tutorial that only tackles a small part of making a game with the Unreal Engine would be a good idea, as you can build up from there.”

The Steam release of Last Knight: Rogue Rider Edition is in early access and incorporates all the previous game updates plus some additional features and a brand new game mode, an open-ended kingdom generated for you to explore, to interact with its inhabitants, and with plenty of loot. Once you die – and be assured, life can be short in Last Knight – a new kingdom will start afresh the next time you play. With this plus the Story and Endless modes, the Steam release has absorbing and varied gameplay.

Be sure to keep up-to-date with all things Last Knight by following Toco Games on Twitter at @TocoGamescom!