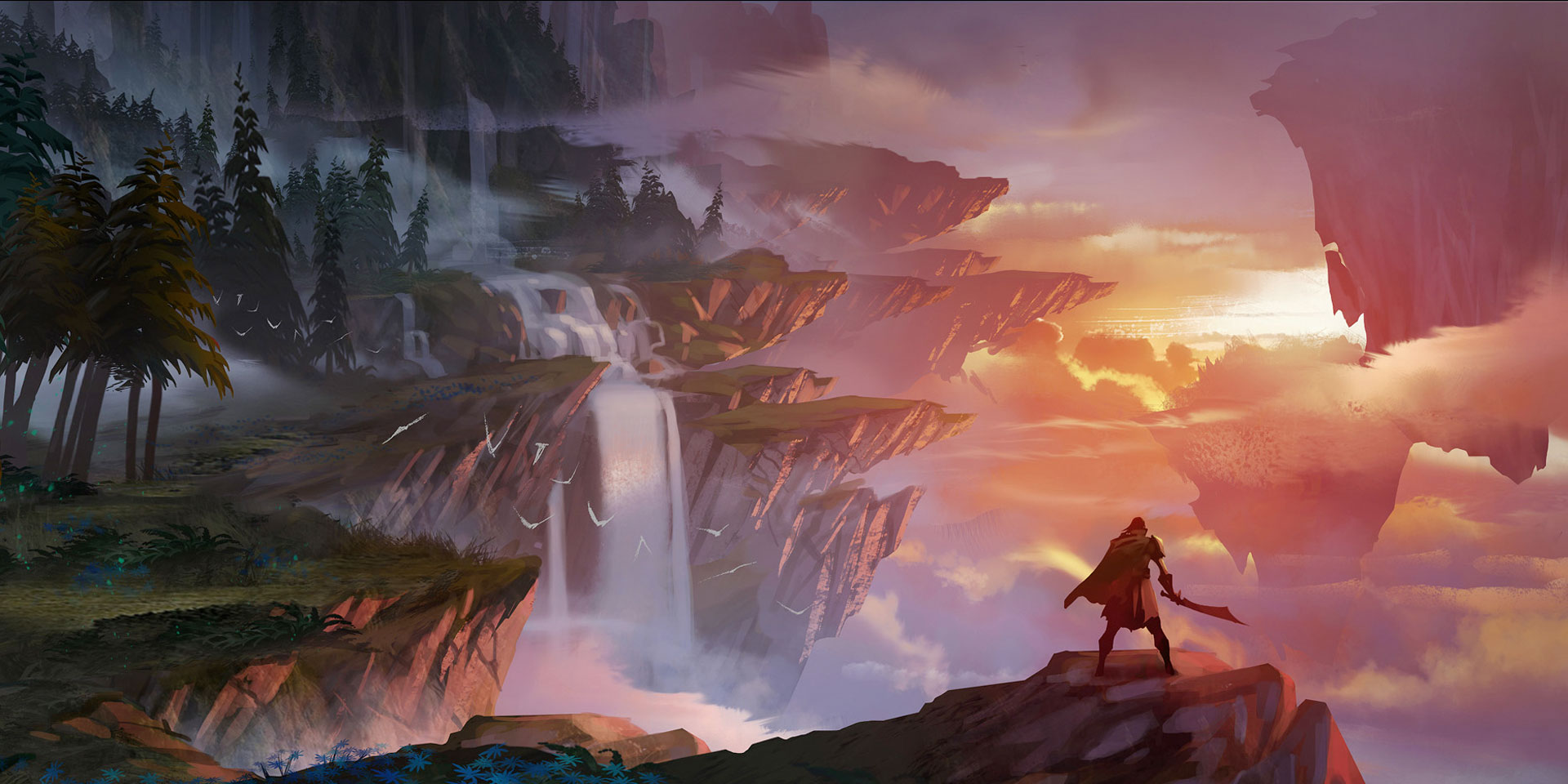 Hunting Behemoths and Crafting a Legacy in Dauntless

Currently in beta and set to launch as a free-to-play title in 2018, Dauntless is a cooperative action-RPG that has you and your friends venturing throughout the Shattered Isles to hunt Behemoths; massive, ferocious creatures that draw aether from the land, destroying it in the process.

Dauntless breaks from roleplaying traditions by not only removing classes, but levels as well. Instead, both your abilities and your prowess as a hunter are tied to your gear, crafted from the spoils of battle and heavily customized to forge your own unique identity.

As Executive Producer and Phoenix Labs Co-Founder Jesse Houston explains, Dauntless was created to be a long-lasting social experience; a world in which players can feel connections to their characters beyond stats, and friendships run deeper than just sharing a guild name.

Tell us a little about the history of Phoenix Labs and how it came to be.

Robin Mayne, Sean Bender, and I all worked together at Riot Games on League of Legends. Prior to that, Robin and I were together at BioWare on the Mass Effect franchise. We've all been in the industry for a long time, but we've always worked for large teams and publishers.

We started Phoenix Labs to carve our own path in the games industry and build new and memorable gaming experiences. We believe that playing together is the best way to experience a game. We're dedicated to creating new and exciting gaming spaces for players to share together.

What inspired you to create Dauntless as your first project?

We knew that we wanted to establish a social experience — a game in which people could play together for years to come — before we even explored genre.

We chose PvE because we believe in the power of players collaborating and sharing victory. We landed on the concept for Dauntless because we wanted to innovate on a genre that we feel hasn't been heavily explored. A game like Dauntless doesn't quite exist yet. We want to take the great social experience of a modern MMORPG and bring to it the high-fidelity combat of the action-RPG space. 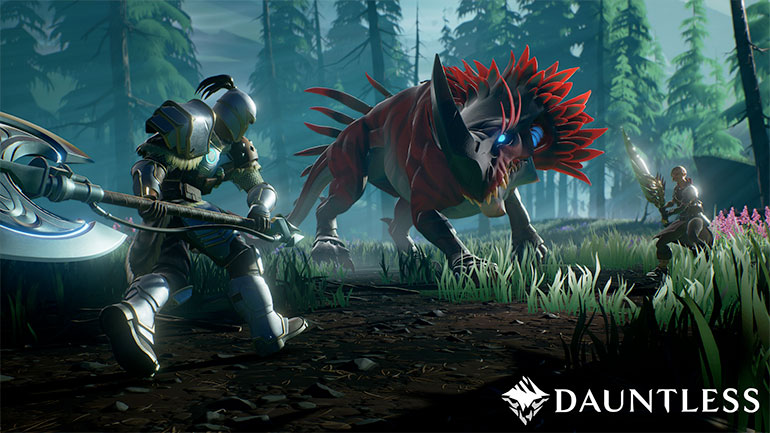 Can you give us a quick overview of the combat system and why you chose this route?

Combat in Dauntless is all about choice, whether it's the strategy behind picking your weapon and armour skills to best suit your playstyle, or tactical execution and split-second decision making in the heat of combat to survive.

Skill is a cornerstone of the Dauntless experience. Because Dauntless is challenging, every victory should feel rewarding and every defeat should still be visceral. You need to internalize the impact every sword swing, feel bones crunching every time your hammer makes contact. Whether it's an aggressive attack or a calculated dodge, every decision a player makes must feel responsive and tight. We often joke that button mashing is the fastest way to an early grave for any Slayer in Dauntless.

Instead of traditional levels and classes, character progression is dependent on a player's gear. Can you tell us a little about how this system works and the reasoning behind it?

Although progression and leveling are central to any RPG, we saw an opportunity to depart from traditional class systems and linear progression with Dauntless. While everyone has a preferred class (shout-out to my fellow WoW Shamans!), we wanted something more flexible. We expect players will spend hundreds of hours in the Shattered Isles and didn't want them locked into their first decision.

In Dauntless, changing your play style and capabilities is as easy as swapping gear. There's a fresh new experience behind every weapon, even if you've spent 50 hours with your love. Put down a hammer, pick up the Chain Blades, and you're ready to go. 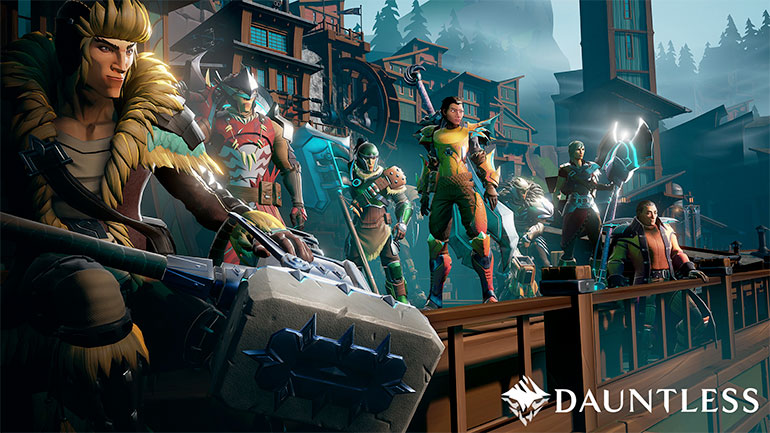 Character customization seems to be a major focus. In what ways can players create unique identities for themselves?

Dauntless is about forging your legend. This starts with character creation. We're trying a fresh take on how you realize your legend in Dauntless, starting with your ancestry and body type, then making that character your own through customizing facial features, hair, eyes, and the options you would expect of a 2017 RPG.

But, that's just the beginning. You'll unlock hundreds of weapons and armours as you progress through the story. Each is customizable with dyes, shaders, and tins, turning your kit into your calling card. Because gear is varied in both appearance and utility, we're offering a transmogrification system for players who don't want to compromise. Ultimately, we want every player to feel like the star of the show when they stroll through Ramsgate.

What sort of tactics will players need to employ to take down the Behemoths?

Each Behemoth provides a unique challenge to players where no two encounters will be alike. Players will need to coordinate their attacks and plan ahead if they want to survive a hunt. While we don't feature classes in Dauntless, we want players to be able to set themselves apart through gear choices that allow for specialization. Players can keep the team healthy by selecting a lantern (our version of the accessory slot) that focuses on team heals, stocking up on Revive Talismans, and using armor that provides AOE perks. In contrast, players with the Berserk Potions enjoy a risky offense.

Behemoths will unleash a variety of attacks to take down players. A good team will recognize when to go on the offensive and when to disengage. Certain body parts on a Behemoth can be injured to remove combat threats, such as severing tails, cracking teeth, and bruising ribs. Not only does this give you an advantage in combat, but damaged parts also provide unique loot options upon completion of the hunt. 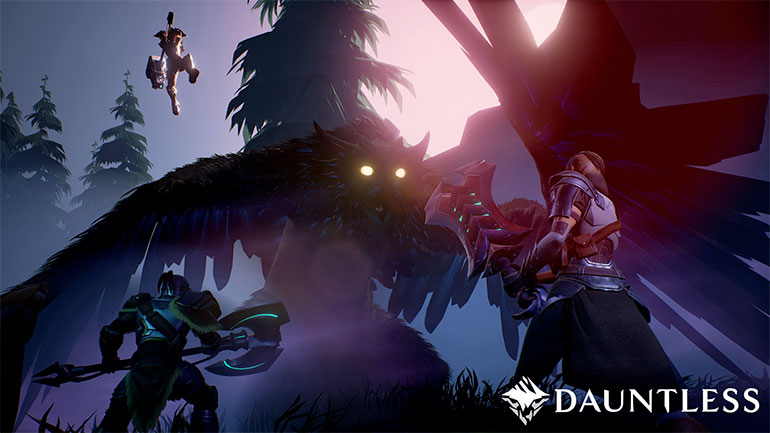 With such a heavy emphasis on co-op, how are you shaping the guild system around that?

You've probably noticed that creating a social experience is important to us. Guilds play a huge role here. Accomplishment and achievement is always better when shared with friends. Currently, guilds provide players with a means to coordinate, communicate, and find other like-minded individuals to play with. We're currently expanding this system to include things like shared progression, rewards, and in-game items.

Why did you choose to use Unreal Engine 4 on Dauntless?

We require something that will scale with our needs. Dauntless is a AAA online game and everything from art and animation to gameplay and online service needs to feel premium. Unreal is a great engine and many people from the team have direct experience shipping games on the platform. So, it was an easy choice.

Seeing Dauntless in motion is like watching a digital painting coming to life. What can you tell us about your approach to visual design?

Dauntless features brave heroes, ferocious Behemoths, and the majestic Shattered Isles. We want them to look and feel iconic. Our art style is best described as low-frequency of detail with high-fidelity lighting. The end result is sharp lines, shapes, and profiles punctuated by robust colors and spectrums.

Our approach is to create something timeless and durable. We plan on supporting Dauntless with new content and expansions for many years to come and we want the art style to always feel modern and exceptional. Unreal offers the flexibility, technology, and ongoing support that we demand to achieve this vision. 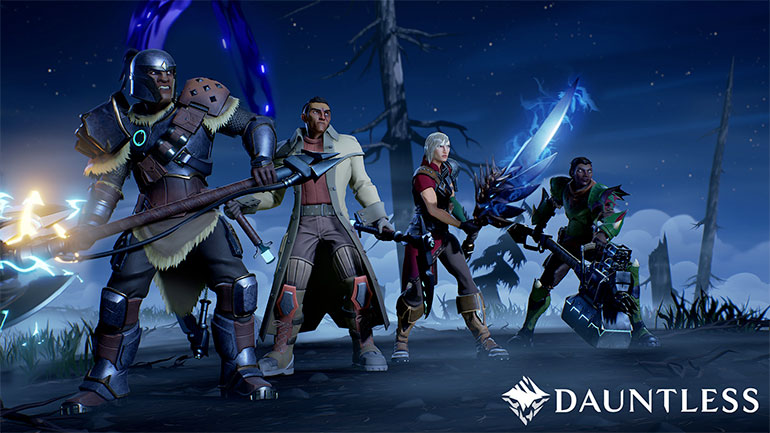 Tell us about a favorite tool or feature of Unreal Engine 4 and how that aided you in the development of Dauntless.

We love Blueprints at they allow us to be agile and spread the load of creating new and interesting content easily across all team members.

With the alpha behind you and the closed beta now underway, how have players helped to shape the future of Dauntless?

Community collaboration has been huge for us. Seeing the reception and feedback from the community has been overwhelmingly positive for the studio. We're completely floored by the great quantity and quality of the feedback we receive. Every day the community is helping us make Dauntless a better game.

A great example can be seen in tutorials. Shortly after launching the tech alpha, we saw a certain pattern of behavior. Either people played dozens of hours or five minutes, with little middle ground. Upon digging deeper we discovered that many players were getting stuck at the beginning of the game. Several friction points made it difficult for new players to understand how to progress, where to go, and essentially how to play the game. It was a great moment for us as a studio when we were able to identify the feedback, quickly pivot to fix the problem, and beginning rolling out improvements. 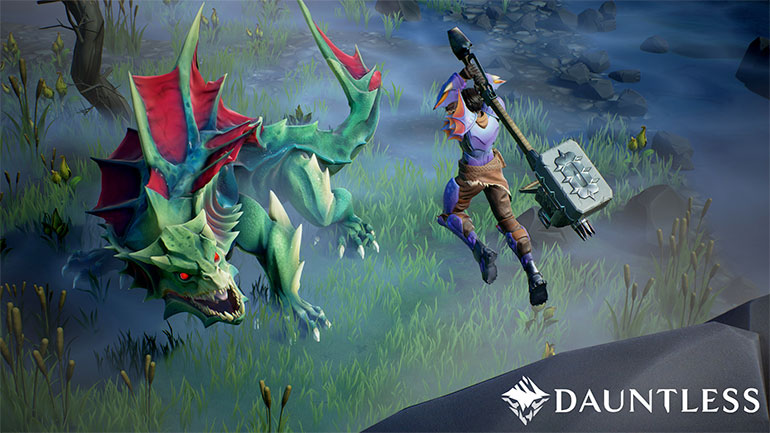 How can people get involved and where should they follow you for more information?

Players can sign up for the Dauntless closed beta at www.PlayDauntless.com. If you want to get in today, you can purchase a Founder's Pack complete with exclusive rewards and in-game items. Hit us up on social media @PlayDauntless.