From zero to light speed: fast-tracking with Unreal Online Learning

What do an archviz professional, a musician, and a filmmaker have in common? They’ve all leveraged the power of Unreal Online Learning to fast-track their creations.

Let’s take a look at how these three professionals went from zero to sixty with UOL, and brought their ideas to reality. 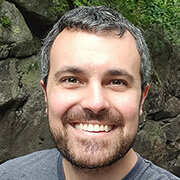 Pete Sedlacek is a Freelance Visualization Specialist who has been working professionally in 3D and visualization for the past 10 years, including roles in simulation and training, product rendering, and architectural visualization.

Recently, a client presented Pete with a challenge: build a visualization pipeline capable of delivering beautiful imagery and flythrough video on extremely short deadlines. “After evaluating several options, we quickly decided Unreal Engine would not only deliver what we needed, but also open new opportunities for our design department, construction teams, and even members to experience,” Pete says.
Image courtesy of Pete Sedlacek
Pete attended Unreal Academy in Raleigh, and continued his education with Unreal Engine Online Learning. “I wanted to be sure my limited training time was being used efficiently,” he says. He focused first on general architecture courses on rendering, lighting, materials, and Datasmith, then moved on to advanced courses.

“I’ve greatly enjoyed the courses by Sjoerd De Jong that deep-dive into various engine concepts,” Pete says. “It’s not enough for me to learn the buttons; I want to understand how the technology works and demystify what the engine is actually doing. I appreciate that the UOL carries curated, industry-relevant training from experienced professionals, all in one place.”

Pete eventually learned so much about Unreal Engine that he was able to create an Unreal Engine Editor Utility Blueprint called Auto-Matic, which automatically fills a parking lot with randomized vehicles. “We often had to visualize large sites containing parking lots. Filling these with vehicles by hand is tedious, and it’s also difficult to get a truly random and believable result,” he says. “We had already experimented with object-replacement inside Unreal Engine, and I wanted to see if I could extend that capability.”
Image courtesy of Pete Sedlacek
With his newfound knowledge, it took Pete only about two weeks to build the tool and the UI. “The best thing for me is that learning all these techniques can help solve similar issues with populating large scenes, to bring even more flexibility and realism,” he says. Pete credits the UOL course Making a Blueprint Product Configurator with teaching him many of the fundamentals he used to create Auto-Matic.

“I’ll never forget the fundamental shift in my mindset as I began using Unreal Engine,” he says. “Instead of creating images, I found myself creating a space or a world. Instead of building a render, I could build an experience. Being able to explore and craft my scenes in interactive photorealism brought back a sense of excitement and just plain fun that drew me to this type of work in the first place.”

Taylor Ellis, a.k.a. Aspn, is a professional filmmaker / music producer who recently produced a music video for the song Forgotten entirely in Unreal Engine.

Aspn has no formal background in 3D or game development. However, this didn’t stop him from using Unreal Online Learning to teach himself and, with some Quixel and Unreal Engine marketplace assets, produce the video in just a month.

“I was a one-man band on this project, and the tools that Epic has made available completely for free allowed me to make an animated music video that, in my opinion, stands up pretty well to some non-real-time projects,” he says.
Image courtesy of Taylor Ellis | Aspn
Aspn saw what The Mandalorian crew did with the UE virtual environments, and knew that because of COVID-19, it would be impossible to shoot anything live action for the foreseeable future. “I thought it would be really fun to make a music video for the track myself, but obviously I couldn’t because of the lockdown,” he says. That was when he decided to dive in and teach himself how to use Unreal Engine.

“I was able to learn a few things from YouTube videos, but I really wanted a concise, curated educational experience,” Aspn says. “The great thing about UOL is that it is extremely organized. This made it super easy to go from a complete beginner to reasonably skilled in about a month.”

Aspn was impressed not just with Unreal Engine’s features, but its speed. “I was surprised by how good ray-traced lighting looks,” he says. “Forgotten was rendered on a 2080ti, and the lighting and reflections are insane, and it was running around 30 fps at 4K. I remember thinking how funny it was that it took longer to export the final video from Adobe Premiere than it did to render the clips from UE, even with really high-quality assets with some thick foliage. I couldn’t do that in Blender or Maya.”

The intro courses, as well as those in the Film/TV category, were the ones Aspn found the most helpful. “The particle simulation courses basically made the video possible,” he says. “Those instructors helped me wrap my head around it though, and once I did, I felt like a magician!”
Image courtesy of Taylor Ellis | Aspn
Going forward, Aspn sees himself using Unreal Engine for many other aspects of filmmaking. “Usually I make shot-lists/storyboards, but for this project, because I didn’t really know what was possible, I sort of made each shot as I went,” he says, adding that he now envisions using Unreal Engine for storyboards and previs as well as final. “Doing previs that way is so satisfying. I can just float the camera around wherever I want to find interesting angles.” 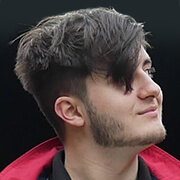 Fine Art student and musician Aaron Betts, a.k.a. Whnvr, started using Unreal Engine a couple of months ago. “I saw the potential in the software and the kinds of projects it would unlock for me in the long run, especially with Unreal Engine 5 on the horizon,” he says. “I dropped practically everything else and have made it my priority to learn the program. The concept of real-time is just that inspiring.”

Aaron recently completed his first video in Unreal Engine after just a month of training with Unreal Online Learning. “I discovered UOL when looking for a paid course that might provide a little more continuity to my learning experience,” he says, “and was genuinely surprised to find that Unreal had its own in-house, free, online school.”

“Unreal Online Learning uses this concept of discrete learning paths that really appealed to me, so I could select pathways that were much more relevant to me and my art practice and skip around features of the engine that I would be unlikely to use,” Aaron continues. “This sped up my pace of learning immensely, as it meant that I could learn the skills that would enable me to directly create what I wanted to see. The whole process was very intuitive.”
Image courtesy of Aaron Betts | Whnvr
Aaron credits the Your First Hour in Unreal Engine course with kick-starting his journey into the software. The rest, he says, felt like play. “It was like using LEGO blocks,” he says. “I remember when I accidentally stumbled across how decals work, and just threw as much grime at the walls as possible because of how much fun it was. The ability to quickly swap out materials and assets to get closer to what I had in my head, as well as iterate on those ideas, felt immediate and electrically powerful.”

Going forward, Aaron will be focusing on real-time photorealism for exploration within VR. He wants to learn how to build realistic natural environments through the Constructing Believable Environments learning path.

“My ultimate goal with Unreal Engine is not just to produce music videos, but to produce entire worlds that interact with and respond to my music,” he says. “I am especially excited by the emerging technologies of virtual production in this context, and could definitely imagine a future in which I don’t just utilize the Unreal toolset for music videos, but also for virtual reality shows and even live, in-person visuals.”