Arkane Studios has been utilizing Unreal Engine 3 (UE3) to let their imaginations run wild in crafting a world that looks unlike any game ever seen before. Dishonored, the new first-person perspective action adventure game, is set in the industrial whaling city of Dunwall. The world has a painterly style with a 19th century London feel blended with steampunk, fantasy and science fiction influences. The teams in Austin, Texas and Lyon, France have been using UE3 technology to further push the envelope of non-linear exploration.

“We love first-person action games with aspects of RPGs or adventure games added in,” said Raphael Colantonio, co-creative director on Dishonored at Arkane Studios. “There’s a particular type of game that is a blend of genres that we’ve always strived to create: immersive, first-person, with resource economics; a cohesive, plausible sense of place; variable approaches and outcomes that are presented in a consistent way, often relying on simulation, so the player can formulate and execute strategic plans in how they undertake encounters.” 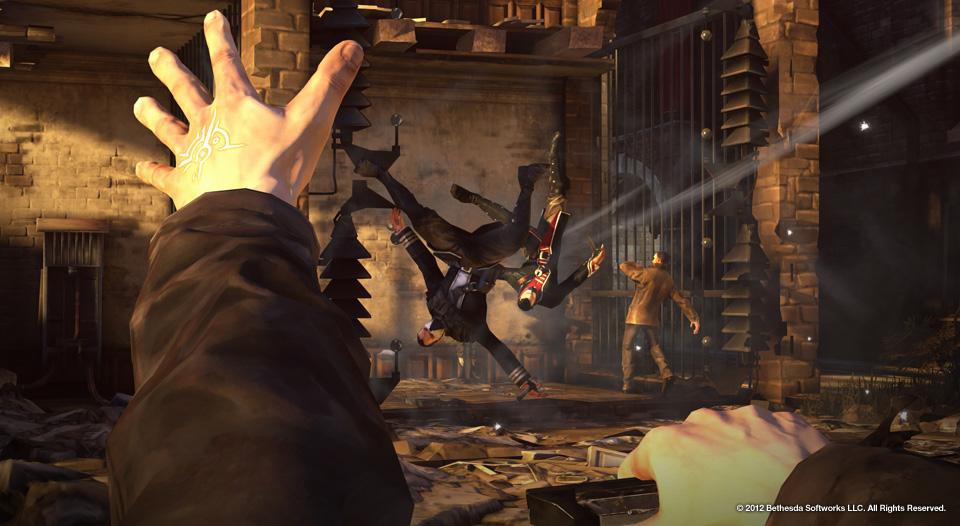 Dishonored gameplay blends combat, stealth, and role-playing features. Gamers take on the role of a supernatural assassin in a retro-future world. The game mechanics can be applied creatively, as the developer is encouraging gamers to play their way.

According to Harvey Smith, co-creative director on Dishonored at Arkane Studios, there remains confusion over the types of games Arkane has worked on in the past such as Arx Fatalis, Dark Messiah of Might & Magic and Deus Ex: Invisible War.

“We’ve never worked on open-world games, but the confusion exists because our games – while mission-based – feel very nonlinear and open-ended in very specific ways,” explained Smith. “There are multiple pathways through the environment. Sometimes these are just realistic routes, like rooftops and windows, and at other times these pathways are enabled by the player’s choice of powers, play style and morality. We want to allow the player many choices so they can author their own experiences.”

Arkane had a choice in game technology when it came time to bring their vision to life. Colantonio said that barring the additional stealth and AI code that the team wrote, UE3 enabled their artists and level designers to start immediately prototyping layouts and mission concepts.

“Our game is special, blending first-person melee combat, stealth and physical mobility,” said Colantonio. “So our tech director and lead gameplay engineer – Hugues Tardif and Stevan Hird, respectively – have led their teams in the creation of a variety of features and code extensions.”

“We’ve used Unreal Kismet, Unreal Lightmass, the new navigation mesh system and most of the standard tools. We’ve also added our own features, such as audio propagation and a dialog editor, and we’ve replaced ‘Matinee’ with ‘Soiree’ because we needed to have a way for our NPCs to constantly switch between AI and scripted scenes,” added Smith. “We’re proud of the amount of things we got the engine to do at the same time for performance.”

UE3, along with advances in technology, have helped the team implement exceptional lighting, develop better physics and gather more characters on screen with higher polygon counts. As a studio, there’s a certain level of graphical fidelity that the team loves. Smith and Colantonio like the abstract game mechanics, but they also really like creating rich, interesting environments.

“We’re using a lot of the advances in technology for a very analog AI system,” said Smith. “The AI is not just a magic circle that knows where you’re at when you’re inside the circle. It has a set of view cones. It’s used in the dark and with distance, where the vision falls off. The AI goes into an indeterminate state when it’s not sure if it’s seen you and will give up if it hasn’t found you. It’s a very warm, perception-based AI.”

The end result is a non-linear adventure that begs for replay given the open gameplay choices. This rich virtual world, ravaged by a rat plague and filled with unique characters, shows yet another way that UE3 is being used to enhance the creative visions of game developers around the globe. Dishonored stands out from the crowd, such as UE3 games BioShock and Mass Effect before it, as an innovative new interactive adventure.