When the Michigan Department of Transportation (MDOT) wanted to show how Connected Vehicle Research (CVR, formerly Intellidrive) would work in real-world driving conditions, showing the future of car safety and technology, they turned to Parsons Brinckerhoff Project Visualization, a Denver-based visual communication services company. The PB team faced a tight budget and a short 4-month development cycle and looked no further than UDK to meet its visualization needs.

“Due to the incredibly short turnaround, UDK was immediately attractive because of how well it fit with our modeling pipeline for AEC visualizations,” said Tom Shannon, senior visualization specialist at PB Project Visualization. “The Lightmass system in UDK allowed us to achieve very high quality graphics in a very short period of time, enabling us to concentrate on the script and level design.”

Four months later, the team had put together a polished demo for users to see how CVR worked from behind the wheel. It’s a simulation that would look at home in any best-selling racing game today, however it was created by the Michigan Department of Transportation and a visualization studio in a matter of months.

Check out how the power of Unreal Engine 3 empowered this team to create a true-life community to test road conditions in suburban communities and calculate the effects of bad weather on the UDK Forum.

You can also chat with the developers on the UDK Forums.

When the team at Denver-based PB Project Visualization was challenged to create a driving simulator within four months on a tight budget, they knew they needed two things to make it happen – a top engine known for its high-quality visual capabilities and a team who could learn how to use that engine.

Using UDK, a 10-person team (including 4 full-time developers) worked to create the technology and the driving simulator for the Michigan Department of Transportation booth at the ITS Michigan Trade Show.

Tom’s search for an off-the-shelf engine was equally as challenging. It had to be up to the task of creating a visually rich, real-world dynamic and also mimic a driving experience – complete with turns, hills and lighting. Unreal Engine 3 delivered – in a big way.

“Unreal Engine 3 has a reputation for producing stunning visuals. And it has robust networking, physics, AI and presentation technologies that allowed for the entire system to come together cohesively,” said Tom. “We have used other ‘indie’ style engines in the past with great success, but knew we needed something more robust and dynamic for this project. Something that could handle multiple platforms, technologies and could be rendered with little effort.”

The development team was also impressed with engine speed.

“The networking was fast and reliable, and UnrealScript allowed for enough customization of the UI and networking systems to make the simulator nearly completely plug and play. There’s a single icon on the desktop that launches the whole thing,” said Tom. “We definitely struggled getting the driving mechanics to work as expected. Without a frame of reference or much community experience (if any) for getting UDK to talk to a steering wheel and feel like a real car was difficult. Eventually, with seemingly endless iterations on the car’s physics and handling models, we ended up with a car that feels natural and responds in a familiar and predictable way.” 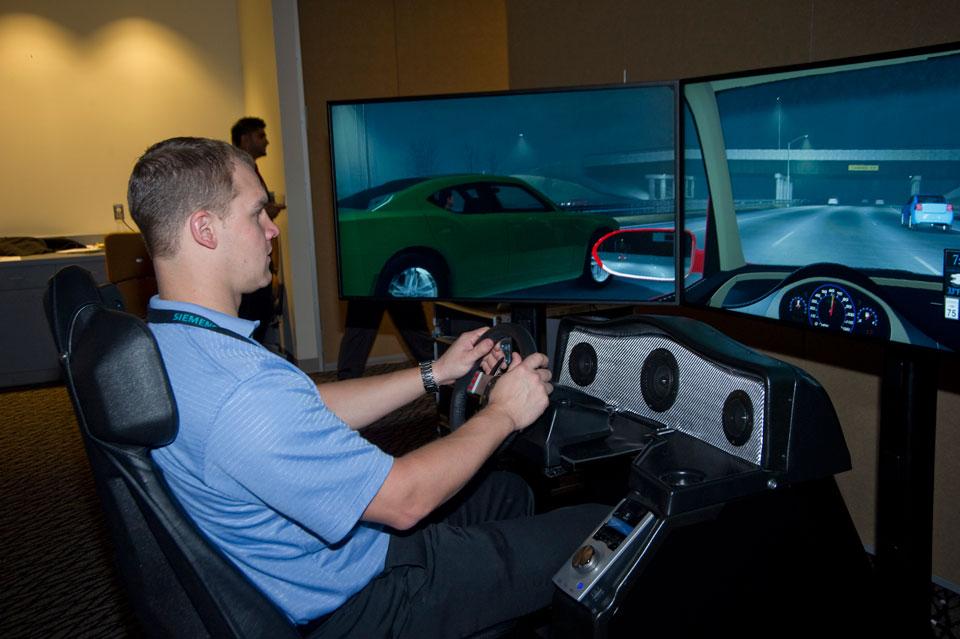 UDK tools were used to make the scenes throughout the simulator more realistic, right down to the texture in the trees and the lighting. Users comments that it really feels like driving around town or through the countryside.

“SpeedTree is used throughout the simulator with thousands of trees per level. The ability to quickly generate real-time efficient vegetation is a huge plus for UDK,” said Tom.

“We did our lighting using Lightmass distributed on our render farm. The ability to distribute the workload of building the lighting for these huge levels meant we could make updates without worrying about build times becoming an issue. The quality of lighting is phenomenal and is comparable to results we get with ray-traced solutions, such as V-Ray, without the tedious baking and export-import process that we have used previously to create the look of global illumination in real-time environments.”

Tom adds, “Unreal Kismet combined with custom objects made with UnrealScript provided an incredibly flexible and artist-friendly development environment. We are able to make radical changes in gameplay mechanics with relatively little effort and iterate upon those changes quickly. This was especially important to us since our lead programmer worked remotely from across the country for the majority of the project.”

Though there were two team members who had worked with UE3 in the past, the UDK community was a huge help in guiding his team through the phases.

“Both Epic and the UDK community have been invaluable in helping make this project a success. From the very earliest prototype stages there were knowledgeable people sharing experience and giving us insights that saved us huge amounts of time and energy,” said Tom. “Throughout the project the positive response and encouragement from the community has really been phenomenal.”